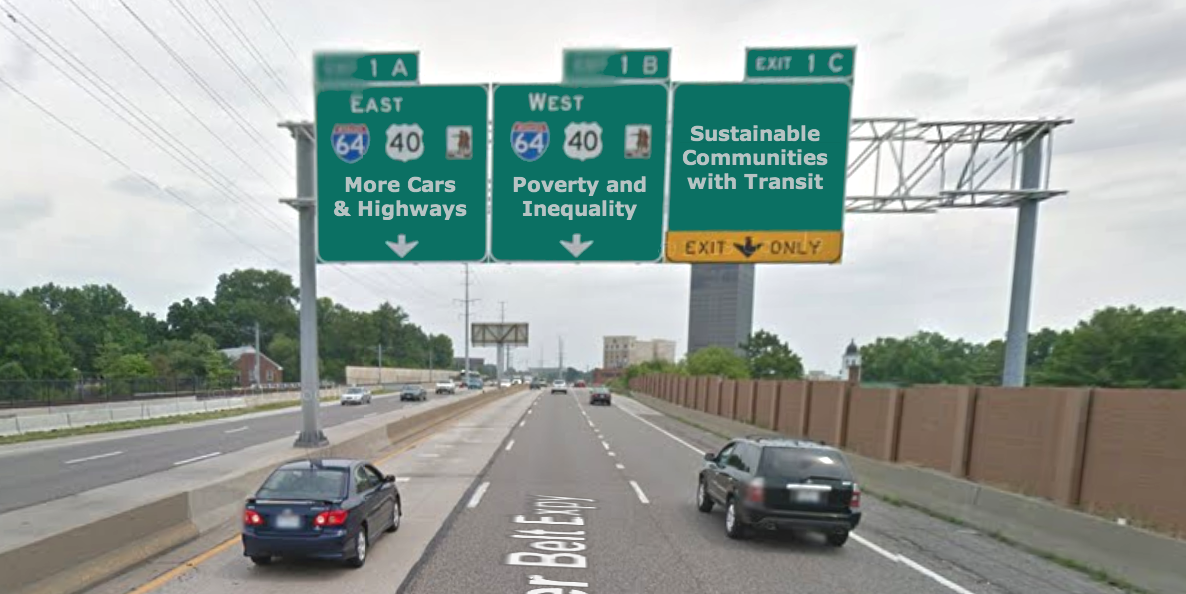 On the heels of the City of Louis list of transportation projects it would like to prioritize if the 3/4% sales tax measure passes in August, St. Louis County is out with their wish list. With an aging, declining population, and rising poverty, the County is betting that the future is highways.

Of the anticipated $841M taxpayers would provide to St. Louis County, $12M, or just 1.4% would be transit related. The County, a mix of small communities, inner ring urban suburbs and suburban infill, was virtually built out by 1970.

Leapfrogged by the next ring of counties a couple decades ago, St. Louis County has seen virtually no population growth in 45 years. The 2010 Census showed St. Louis County losing population for the first time since its founding in 1804. Most recent estimates show 12.1% of County residents living in poverty.

The three most prominent goals of the recently passed St. Louis County long term strategic plan, titled “Imagining Tomorrow”, read: “Invest in youth, Prepare for an aging population, Address the consequences and cycle of poverty.” It’s amazing how quickly these easy consensus goals get washed away when the prospect of hundreds of millions of dollars suddenly appears.

Aging inner ring suburbs and suburban areas are facing mounting basic infrastructure challenges. From housing stock to sewer and gas lines, to transportation and retail subsidies, these areas are now arriving at their first opportunity to review the past 50 years, and rethink their next 50 years of investment. (Interactive map of poverty in the St. Louis area)

The City of St. Louis released its wish list just yesterday. The balance there is much more oriented toward building a sustainable community with more and better transportation options. The city list could be better, but relatively little is aimed at road projects that belong in the prior century.

Please read the full County project list, but a few of the more incredible items include $195M for Interstate I-170, which the County states, ” is a critical element to revitalizing the inner-ring suburbs”. Somehow the building of I-170 didn’t contribute to the revitalizing of inner ring communities it traverses, such as Kinlock, St. John, Vinitia Park, and Charlack. Perhaps the document is referring to much wealthier communities of Clayton and Ladue, though even there, one shouldn’t conclude that I-170 has added value.

There’s also $30M for a new I-44/Shrewsbury interchange. This is the South County Connector. Inviting, inducing, more traffic at this point would put increasing pressure on streets to the north. The community most directly affected by this larger project is against it. For some reason they don’t want to be “revitalized” or have their streets “improved”.

Further along that corridor, there’s $75M for an arterial street interchange at Manchester and Hanley Roads. Nearby, there’s $45M to “improve capacity/safety” at Brentwood and Manchester. There’s no note indicating for whom capacity and safety would be improved. Another $16M is aimed at Big Bend and Manchester.

In the end, the listed priority projects for St. Louis County read straight from 1960, seemingly oblivious to the fact that the time since then hasn’t been marked by growth and prosperity for much of the county. It’s unconscionable that a county facing significant demographic and economic challenges would prioritize the spending of $841M of its own taxpayers wealth on a dead end future.

The $12M for transit related projects? There’s $4M for a share of an Interstate running Bus Rapid Transit line, and $8M for a share of improvements on West Florissant to support Metro’s other BRT idea. Other non-highway/road money includes $1.5M for Kirkwood Amtrak station, and $4M match for Great Rivers Greenway projects. This leaves $823.5M for roads and highways.