nextSTL has covered the issue of poverty in the St. Louis area in a number of ways: asking how increasing suburban poverty might play a role in increased City of St. Louis and St. Louis County cooperation, using satire to expose the lack of regional understading, and featuring The Pruitt-Igoe Myth, Mapping Decline and the Spanish Lake film. The numbers surrounding the issue of poverty in the St. Louis area are about what one might expect. The latest Census revealed the City had a poverty rate of more than 24%, well above the 13% national average. Meanwhile St. Charles County was one of only 19 counties in the nation with a poverty rate below 5%.

The numbers, of course, were immediately abused, with the St. Charles County Executive proudly stating that the residents in his jurisdiction have avoided behavior that leads to poverty. In the satiracal piece announcing the merger of St. Charles County and the City of St. Louis, he didn't really say, "St. Charles County now has a professional baseball team, an incredible architectural legacy and mass transit, but we don't have to live right next to it." The fake quote does, however, highlight that while the city's amenities are shared with the region, the challenge of poverty is not. This is changing as the map here demonstrate. The images here are from The Atlantic's interactive map (below) illustrating changes in poverty from the 1980 Census through the 2010 Census using a slidebar.

Looking at the map below, it's easy to see the rapid dispersion of poverty from 1980 to 2010 in the St. Louis region. While the map continues to change, the most rapid dispersion appears to have occured from 1990 to 2000. The City map may appear to have changed to greatest, but a glance at the Spanish Lake area of North St. Louis County, and even St. Charles County, show the growth of poverty outside the urban core. Check out the interactive map below for more views of St. Louis and other cities. 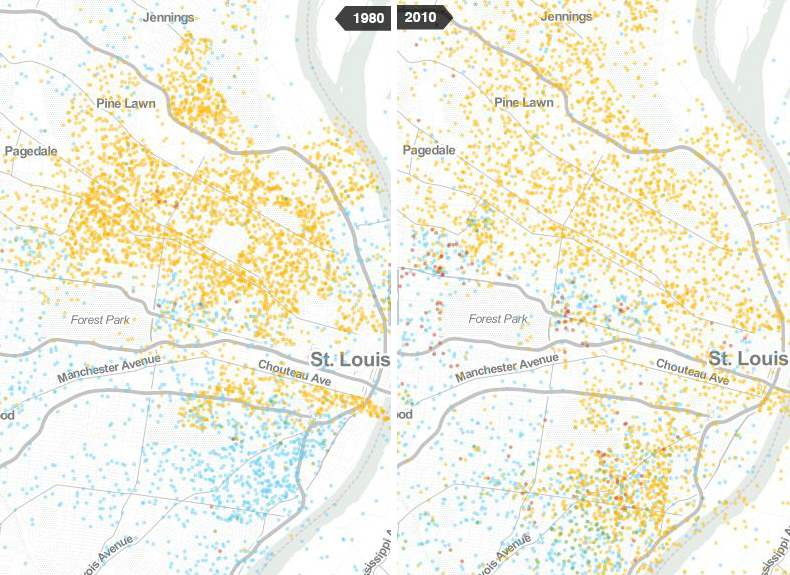