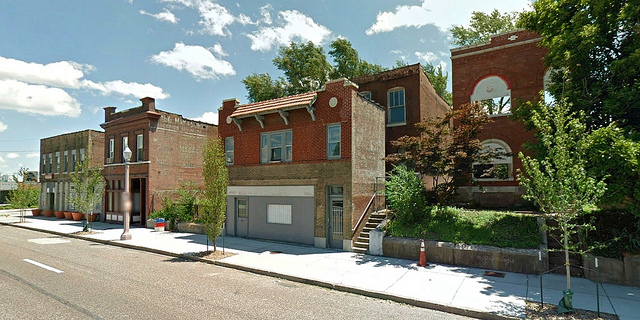 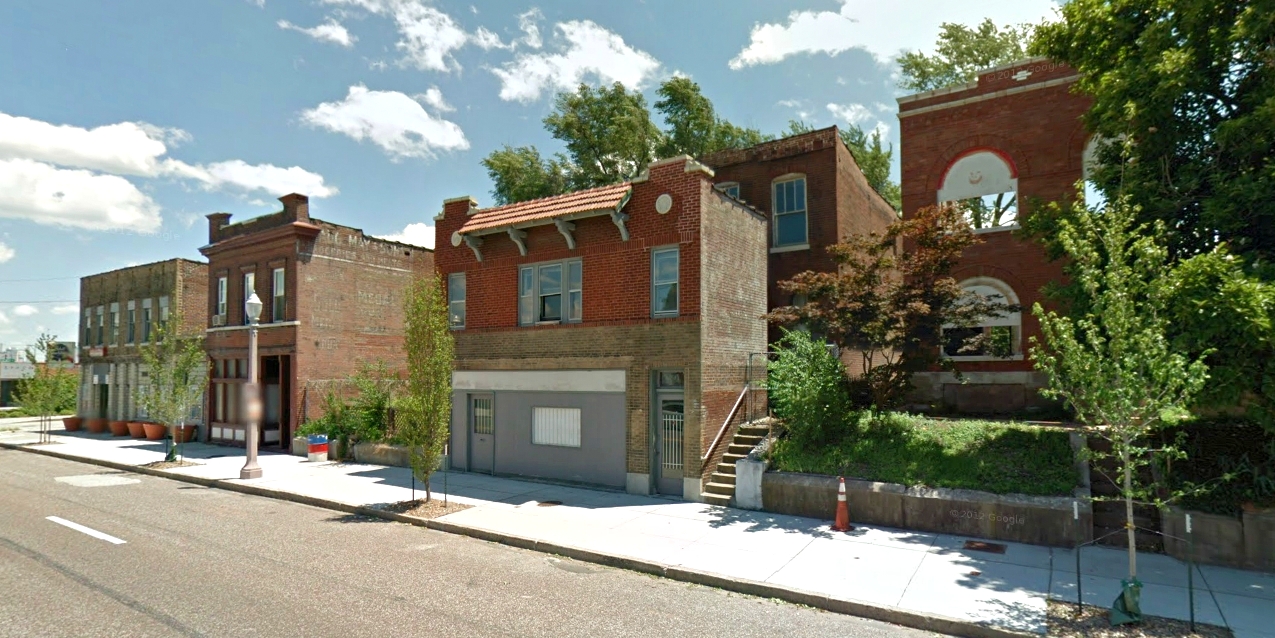 When the preliminary City of St. Louis Preservation Board agenda was released, one address in particular caught our eye: 4180-82 Machester Avenue. This address is centrally located in The Grove neighborhood, an area undergoing an incredible revitalization. Notably, even with increasing development pressure, the commerical heart of the neighborhood hasn't seen a demolition for several years. In that time, many historic buildings have found a new life and some not-so-likely transformations have greatly enhanced the area.

nextSTL publicized the demolition threat for this unique storefront/residential combination via Twitter and Facebook, asking individuals to write to the Cultural Resources Office and Preservation Board, as well as 17th Ward Alderman Joe Roddy. Preliminary agendas provide little information and so we verified the demolition request via city records, which showed a permit application date of July 10, 2012 titled "wreck 2 commercial-residential brick buildings". The buildings share a hyphenated address. There are just two buildings on the site. The building is located in a National Register District and a Preservation Review District. 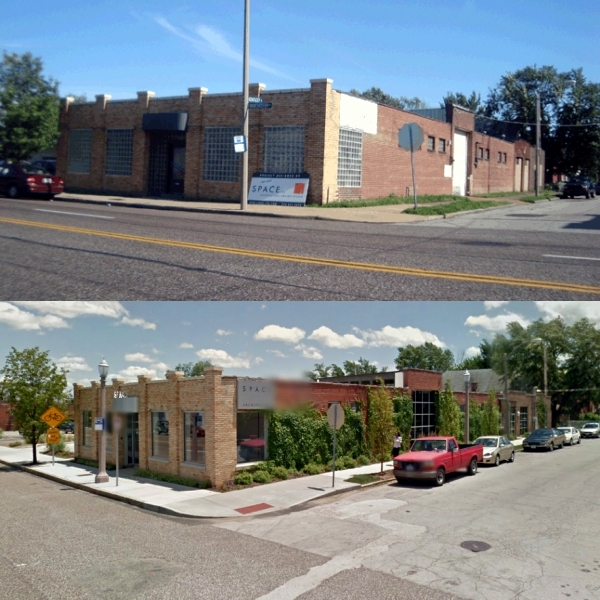 {SPACE Architects complete this unlikely transformation for their new office} 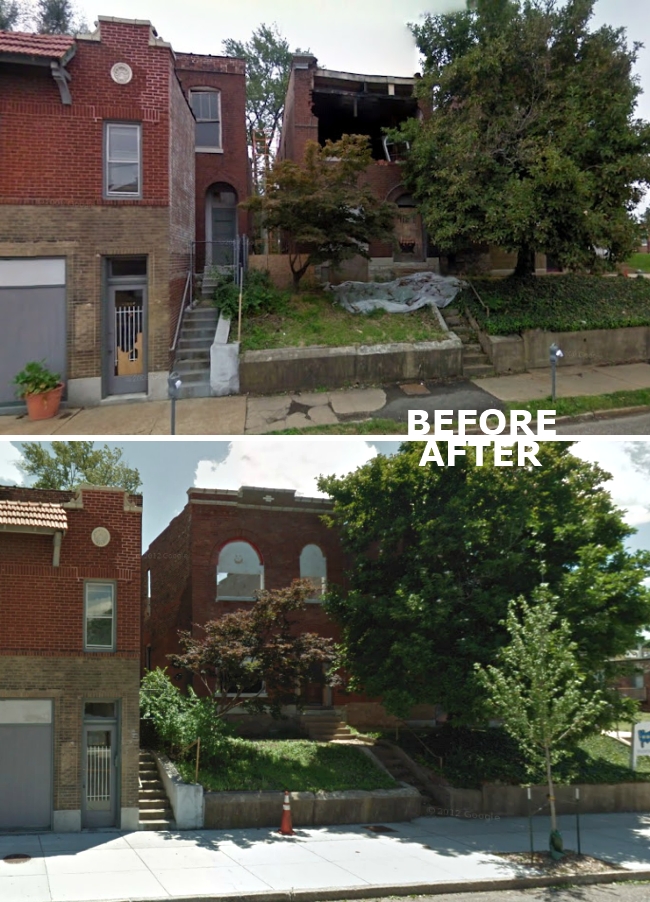 {Restoration St. Louis rebuilt the front and back facades of 4184 Manchester – immedately next to 4180-82}

Then, via Twitter, the Washington University Medical Center Redevelopment Corporation (WUMCRC) told us we were wrong, posting "Misinformation is a bad thing. The subject bldg (not WUCMRC) not on Manchester. It's along the alley. #FACTS", going on to say, "It's the building behind the storefront. The building is structurally unstable and is falling in on itself."

Which is all odd becuase while the CRO's recommendation to deny demolition does not specifically state that WUMCRC or the Park Central Development Corporation has expressed an opinion in this case, it's noted, "Two development entities active in the area, Park Central Development Corporation and the Washington University Medical Center Redevelopment Corporation, have been addressing parking concerns as the commercial area experiences a revival. These entities advise the Cultural Resources Office that they do not endorse the demolition of buildings on Manchester for the provision of parking and that this opinion is shared by many people involved in the recent revitalization of The Grove."

While the source of confusion is uncertain, the recommendation to deny demolition, and support from neighborhood entities, is good news. Misinformation is a bad thing, especially when it errs on the side of missing a real threat. Better to weigh in on a false demolition threat than miss a real one.

Background from the Preservation Board Agenda:

The current owners recently acquired this property which is around the corner from a building they own on Kentucky Avenue. Two buildings occupy this lot: a rear building, the Wolff House (4182 Manchester) built in 1892; and the front L‐shaped Kuhnert Commercial Building (4180 Manchester) built in 1927. Both buildings are considered to be contributing resources to the National Register District. This property was included in Boundary Increase I to the Forest Park Southeast Historic District in 2005, which added the commercial buildings on the south side of Manchester from Newstead to Kentucky and some properties on the north side of Manchester as well.

The condition of the Wolff House at 4182 has become a concern as its west wall is significantly bowed. The property was condemned in early July 2012 and the owners followed immediately with a demolition permit application filed on July 10, 2012. The Cultural Resources Office Director denied the condemnation, indicating that the rehabilitation of the buildings would be the preferred course of action. After further review of the condition of 4182, the Cultural Resources Office Director approved the demolition of the building due to its increasingly unsound condition and, with its set‐back position, a reduced impact on the historic district and its urban design. The owners are appealing the Director’s denial of the demolition of the front building, 4180, at this time.

So new owners have quickly moved to have the historic building they just purchased condemned for demolition. Neither building should be demolished and it's a failure of our city codes that the rear residential building is apparently going to come down. In fact, it's the juxtaposition of the buildings that creates something urban, something of greater value to the city than each one alone. A bowed wall and other deterioration should not be justification to issue, without review, a demolition permit for a building of this character in this location. One only need to look next door to understand the option of stabilization in such cases. 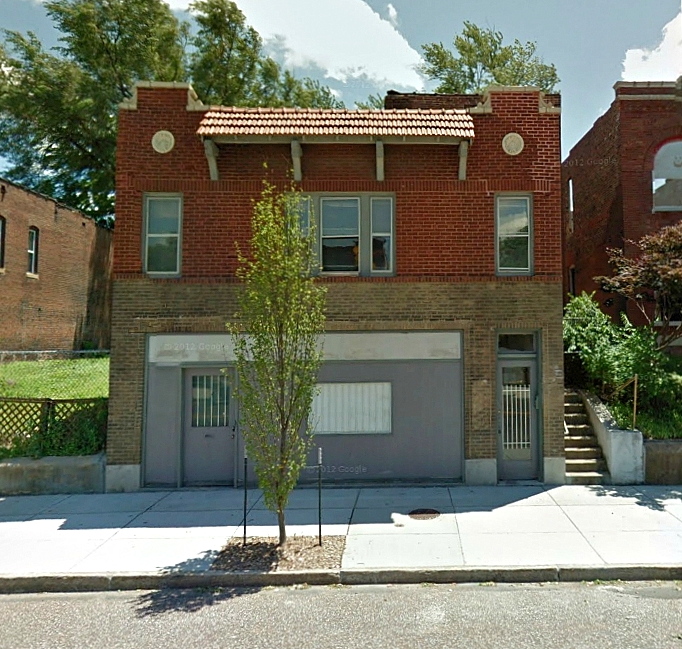 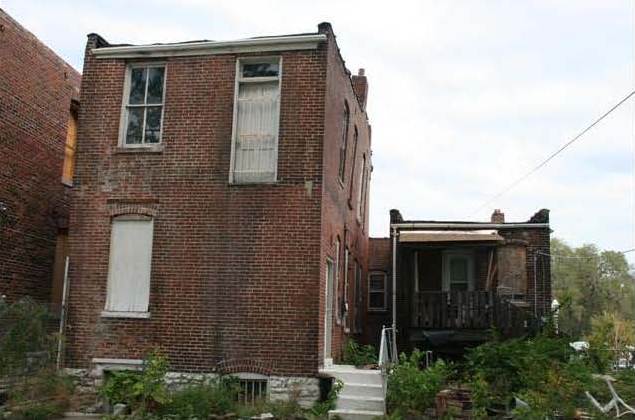 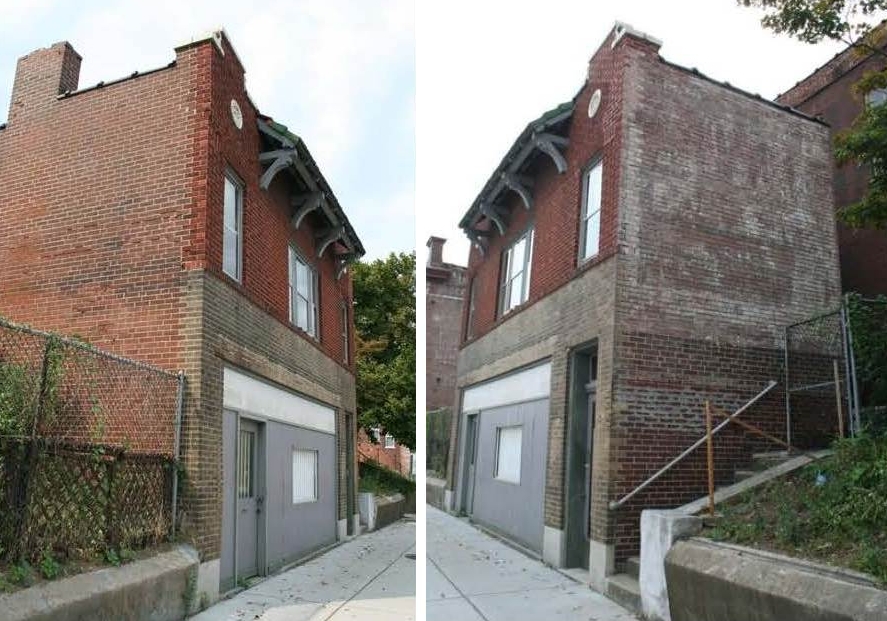