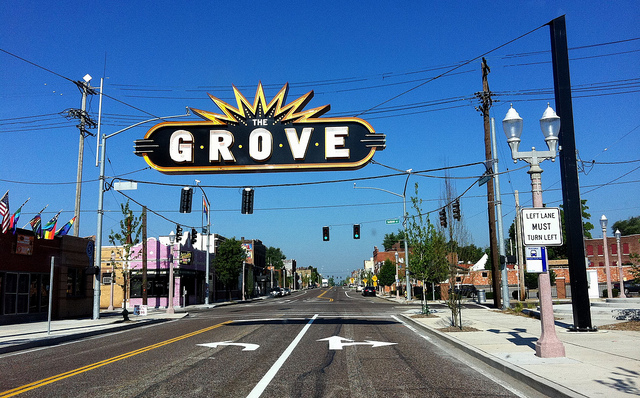 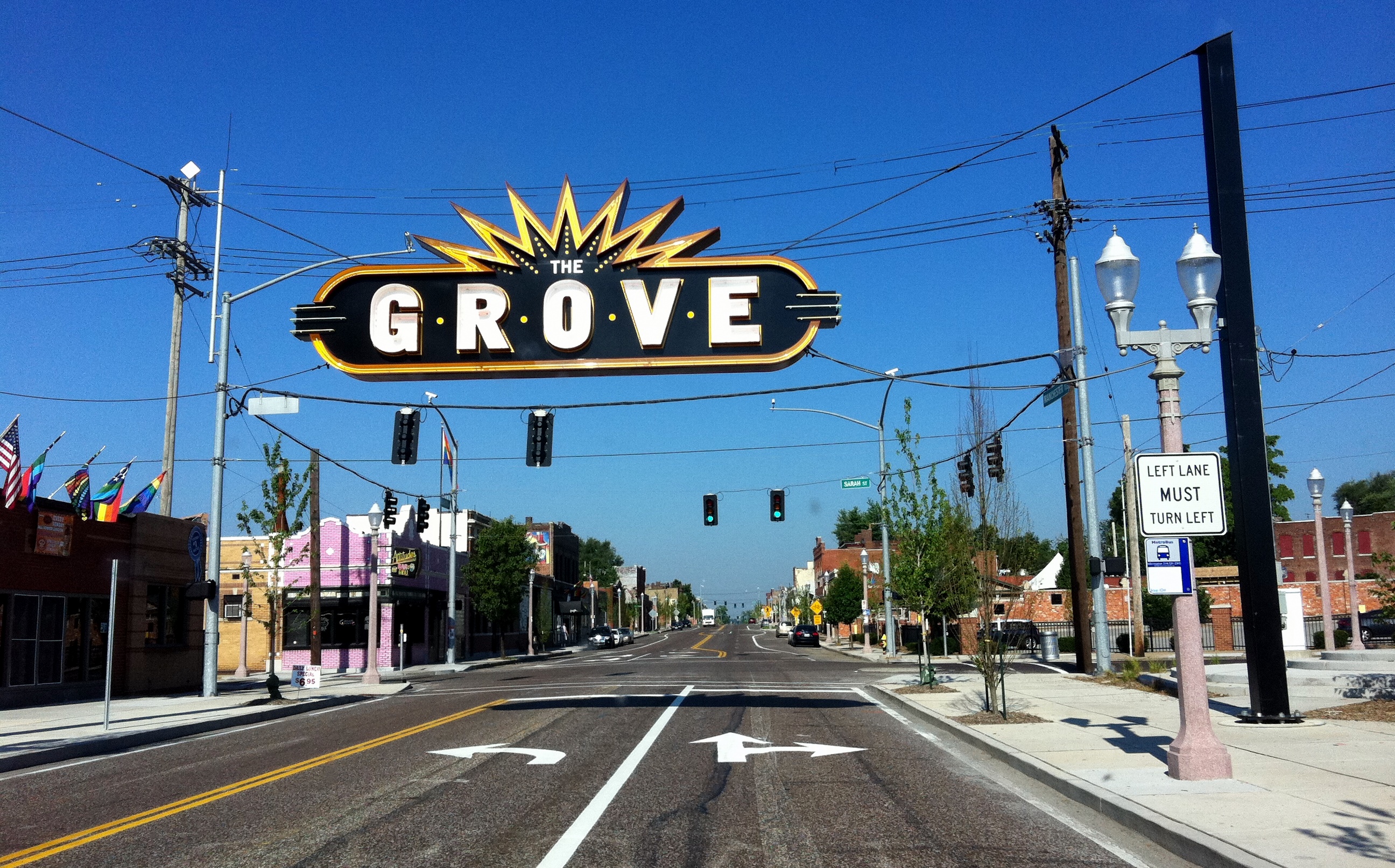 I recently sat down with Todd Waelterman, Director of the City of St. Louis Streets Department to ask him about the process of improving city streets. We covered a lot of ground: from Memorial Drive at the Arch to Vandeventer and South Grand road diets, from the Lindell at Union intersection to speedbumps, vacated streets and the new Grove signs. For now we’ll focus on the emerging commonsense effort to address excess street capacity.

If not exactly built for 950,000 residents (the city’s peak population), the city’s streets could easily accommodate 600,000, or nearly twice today’s count. But why does excess capacity matter? What problem does it present? Generally too-wide streets lack pedestrian and business accommodations. Maybe the street has been widened and widened again to add lanes, each time tearing up more sidewalk and tree lawn. It may just be that walking across eight lanes of traffic is uninviting. Excess capacity is also inefficient and costs more than necessary to maintain.

When streets are narrowed and traffic is slowed, the result can be safer for pedestrians and drivers alike. Pedestrians feel safer and use the sidewalks more frequently. There may be space for trees, benches and outdoor dining. In St. Louis a number of progressive street projects have demonstrated a flexibility in design and a willingness to try new things. Waelterman himself offers a healthy and welcome dose of common sense, “You don’t build a highway for the 15min peak of the day.”

While the system remains deficient and unable to fully cope with vast challenges presented by the city’s outdated and outsized infrastructure, change is happening. With any luck, these positive changes will spur more community involvement. As Waelterman described it, “We work on a request basis. We’re not fortunate enough to have enough staff to go out a dream up solutions.” Perhaps the dreaming can continue to come from residents. 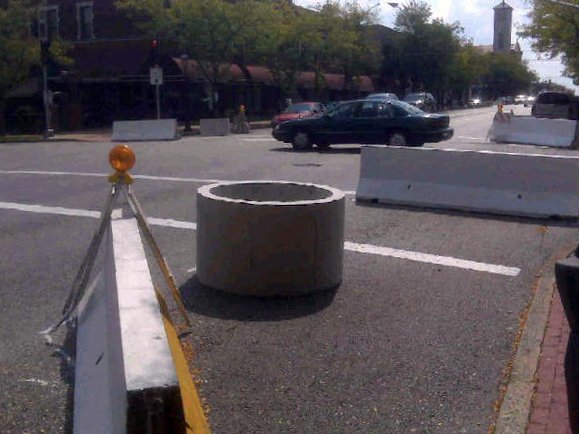 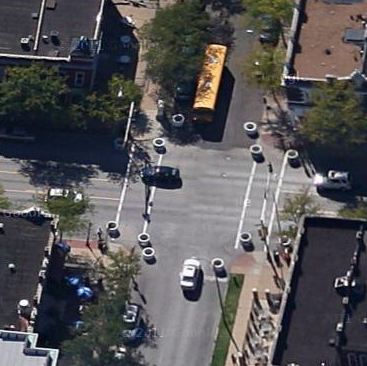 (South Grand) How was the South Grand Avenue lane reduction project completed? Waelterman says it begins with the neighborhood, the people on the streets. Residents and businesses along South Grand from Arsenal to Wyoming requested a study of the lane reduction. “My first reaction was ‘hell no’. The fire and police said ‘no’. After listening to their strong proposal, we did a pilot project.”

The pilot project consisted of lane reductions using “Schoemehl pots”, the concrete sewer pipe sections that began to be used to block city streets during the Schoemehl mayoral administration. The streets department put up a sign with a phone number, asking for public feedback. I personally assumed that public feedback would doom the project.

Was it an overwhelming positive response? Not really. “Response was half and half good and bad, but the negatives were things we could fix,” said Waelterman. These included alignment of turn lanes and a slight repositioning of the barricades at certain points. In the end, neighborhood support for the project proved decisive. But there were other compromises.

An initial plan called for permeable sidewalks from curb to storefront along the modified stretch of Grand. Permeable sidewalks reduce water runoff and therefore reduce the burden on the sewer system, reducing small flooding events. However, the buildings on South Grand are a century old and the outcome of introducing water to the dry foundations caused concern. As a result, what you’ll see today is solid concrete at the storefront and permeable sidewalks nearer the curb.

It’s a small point, but such compromise shows a city department willing to work with neighborhoods and not offer a knee-jerk “no” to new ideas. This type of positive interactivity has played out on numerous other projects in the city as well. That doesn’t mean that each project is award-worthy or the vanguard of a green transformation, but the communication door is swinging both ways on projects large and small. Short of being a proactive department taking the lead on such projects, the willingness to listen and work together is a real positive.

(The Grove) Manchester Avenue in The Grove went through a similar, though less controversial process. Traffic counts made it clear that lane reductions would not adversely affect traffic. Businesses and residents supported the transformation. Once funding was secured, the project proceeded quickly.

Speaking of The Grove, the installation of the massive floating neon signs at the east and west ends of the neighborhood almost didn’t happen, a near-victim of bureaucratic inflexibility. Prior to the first installation, Waelterman was handed a city denial to sign and make final. Why? “They told me, ‘We haven’t done that before.’ So what? Let people build things!” was his response. The signs went up.

(Vandeventer) The on-again, off-again Vandeventer road diet disappointed some, but may serve as the best example of the streets department’s willingness and ability to work with neighborhoods to solve issues. Southwest Garden wanted traffic calmed on the north edge of the neighborhood. New streetlights, sidewalks and trees were installed and before resurfacing, four lanes were painted as two with a central turn lane.

The result was a doubling of traffic accidents during the nine-month experiment. Vandeventer remained four lanes west of Kingshighway and north of I-44. The street has since been returned to four traffic lanes. As the department worked with the neighborhood, it was discovered that a primary issue with traffic on Vandeventer was the need for neighborhood residents to cross the street to get to the MetroBus stop on the northeast corner of Vandeventer and Kingshighway. City streets and the neighborhood worked with Metro to move the stop south of Vandeventer – a simple solution, but one that hasn’t always been easy to execute.

In the end, Waelterman is in favor of experimenting. “(We like to) go out and play in the street and try and simulate changes, see what works.” The good and the bad is that, although projects are supported by a “neighborhood”, this often means an Alderperson. And nothing happens unless that Alderperson, or other organization is able to secure funding. It remains a piecemeal approach depending on enlightened and successful political and business leaders.

So while there may be many streets in the city that could benefit from shedding a couple lanes, future projects will wait for Aldermanic, business and community support, as well as matching funds that enable a grant application to be submitted. This means that areas lacking all, or even one, of these components are unlikely to see changes any time soon, think Florissant Avenue going north from downtown.

(Jefferson Avenue) Another example is the Jefferson Avenue bridge at Chouteau Avenue. A quick study revealed that peak traffic conditions lasted just 20 minutes in the morning and 20 minutes in the afternoon. The six-lane bridge was another case of overbuilt infrastructure. According to Waelterman, the rush consists largely of commuters from Illinois exiting I-44 and going north on Jefferson, “It was a 20 minute period that aggravated people. So how do you deal with that? The volumes didn’t dictate six lanes.”

But it wasn’t just individuals who felt inconvenienced. UPS operates a shipping facility at the north end of the bridge and had clearly become use to the absolute lack of traffic congestion day and night. They may still be grumbling about the changes, but the new four-lane bridge with wider sidewalks and median is a commonsense solution for that project. This is the project that elicited the comment, “You don’t build a highway for the 15min peak of the day. It doesn’t make sense.” from Waelterman.

(downtown) Where one used to find restricted street parking, some changes have been made. Again, traffic counts didn’t dictate the need for four or five lanes on downtown streets. The lack of street parking at rush hour made the city appear even more lifeless. “We’ve taken down most rush hour restrictions,” said Waelterman. “And there are more medians that help calm traffic.” Proposals connected the Arch grounds project call for a narrowed Market Street and Walnut west of Broadway, in addition to other changes.

(Union/Lindell) Where else is the streets department experimenting? Waelterman has recently closed a short two-way cutoff at the northeast corner of Union and Lindell Boulevards. The street was first installed as a bypass for vehicles to avoid streetcars navigating the busy intersections. Public input is running 3-1 in favor of the change and a permanent closure is very likely.

The idea came from Alderwoman Lyda Krewson and her constituents. “The traffic count wasn’t high, it was a no -brainer. The question was how people would adapt and use it.” said Waelterman. At this point, you should notice the recurring “low traffic count” theme. It would seem that very few city streets and likely zero residential streets can currently be justified based on traffic counts. The consequences of which are extraordinarily important for the city. Low traffic counts could allow a wide degree of creativity, but without holistic planning, it can also lead to shortsighted mistakes. The issue deserves its own discussion. Look for more on nextSTL.com soon. 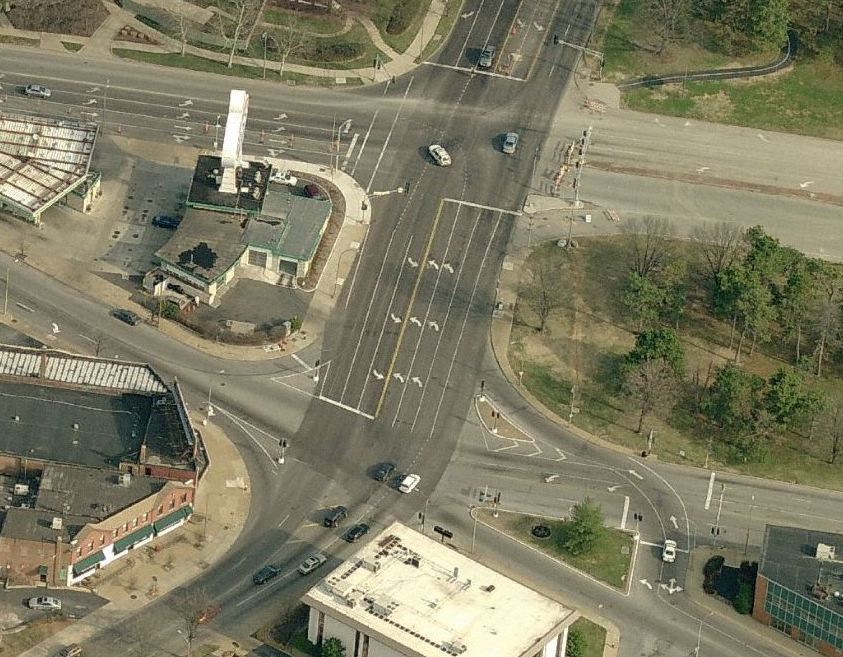 Why the changes? “The park gets jammed up. Any pretty day you can’t get a car in there, so we’re looking at how pedestrians and bikes get there,” said Waelterman. More welcome commonsense that seems to have been lacking in the past. The cluster at the Skinker Boulevard and Clayton Avenue intersection (image at right) is being studied as well. It’s a $2M project that will enhance crosswalks and improve signaling for both pedestrians and vehicles. According to Waelterman, the intersection and equipment is more than 50 years old, designed at a time when bikes, stollers and pedestrians weren’t high on the list of priorities.

The Skinker/Clayton intersection highlights another issue. The city is full of legacy infrastructure designs that devalued neighborhood connectivity, transit and pedestrian access. There’s simply no budget to address all of these disappointing and problematic places. They can only be dealt with as political and funding support aligns. The good news is that smart and engaged citizens partnering with the city can effect positive change.