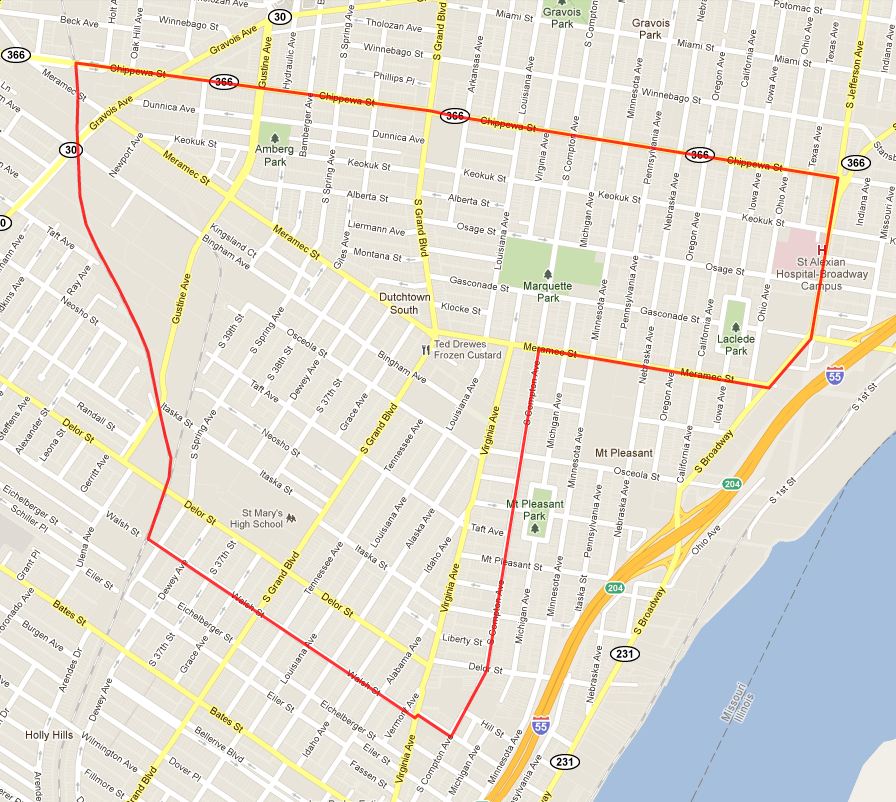 Dutchtown is a south St. Louis neighborhood located south of Chippewa Street, east of the Missouri Pacific Railroad tracks, north east of Walsh Street and west of Broadway and Compton via Meramec Street. These are the official boundaries from the City website, but that’s not what the signs marking the neighborhood say. They have the northern boundary as Utah Street, the eastern boundary of the Mississippi River and the southern boundary of Eichelberger. Oh well. I used the official map on the city website, as I did for all other neighborhoods, so I’m shooting for precision as opposed to accuracy.

Dutchtown was the first neighborhood I moved to when coming to St. Louis in 1994. I think my rent was around $225/month. Not bad for a recent college grad with no money. I fell in love with the City with Dutchtown as my home base. At that time I rode my bike everywhere and Dutchtown was VERY walkable and easy to get around with many intra-neighborhood businesses, etc. It was a nice place to call home then and now.

Dutchtown takes its name from from Deutsch, i.e., “German”, as it was the southern center of German settlement in St. Louis in the early 19th Century. The neighborhood was designed with pride and craftsmanship; it was built to last. 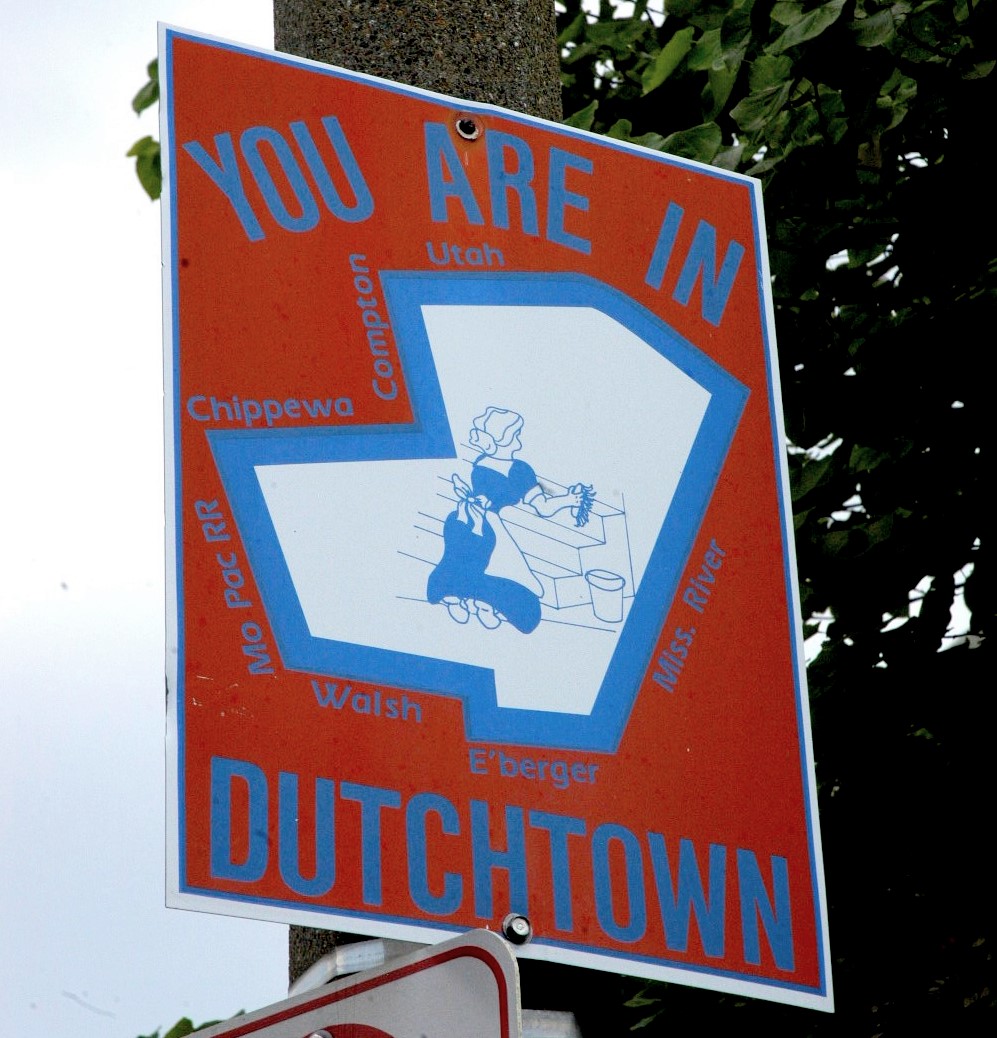 Dutchtown is huge in area and is almost like it’s own small town. It has a hospital (Alexian Brothers), a private Catholic high school (St. Mary’s), a Ford dealership (McMahon), a pharmacy (CVS), light industry, many churches, locally made treats (Companion Bakery, Merb’s Candy, Dad’s Cookies) and many many positive places that have popped up over the last 10-15 years (Grbic, Urban Eats, Maude’s Market, Feasting Fox, Banh Mi So, etc). It’s got 4 potential commercial corridors (the insanely abandoned but super cool Meramec, Chippewa, Grand and Broadway) and tons of great St. Louis-classic houses and apartments of all shapes and sizes. Dutchtown is a perfect example of the gritty cool vibe that St. Louis has. And then there’s the oldest remaining St. Louis location of the wildly popular local treat: Ted Drewes Frozen Custard. The Dutchtown location is on Grand and Kingsland Ct. The first Ted Drewes location was in Florida, the second on Natural Bridge in North St. Louis, the third is the Grand location opened in 1931 (source).

Here are some of the other familiar institutions that are near and dear to many:

^I know the chocolate covered strawberries and atomic apples are the choice of the hoi polloi, but it’s the milk chocolate caramels that keep me coming back for more. Some other fine choices within Dutchtown:

Dutchtown is within a short walk from the Carpenter and Carondelet branches of the St. Louis Public Libary, the Grand/South Grand retail, restaurant and entertainment area. It is flanked by the strong neighborhoods of Holly Hills, Tower Grove South and Bevo Mill.
There are three parks; the largest: Marquette Park which is bisected by Compton Avenue and bound by Minnesota, Louisiana, Osage and Gasconade. It is home to the Dunn-Marquette Rec Center which has a rich history in serving the neighborhood and has a very nicely maintained outdoor swimming pool:
Built in 1917, Marquette Center is located in Marquette Park. The park features two softball fields, a soccer field, playground and three tennis courts. Originally, the center was a locker and shower facility for the swimming pool. After the city renovated the building into a community center, the Thomas Dunn Foundation donated funds to build an air-conditioned gymnasium at the site. The Marquette Center has a crafts room and a multi-purpose room. Children can enjoy soccer, gymnastics, fuzzball, wiffle ball, tumbling and game room activities. Co-educational sports include basketball, softball and volleyball. The park is named in honor of Pierre Marquette. The original swimming pool was constructed approximately 1904 with a sand and gravel bottom. Approximately 1930 the bottom was covered with asphalt. This land was originally acquired from the Board of Children’s Guardians.

The second park is Laclede Park which is visible from Meramec and Broadway. This tract of land was set aside for park use dating back to 1812 and was again reserved for park purposes in a subdivision laid out in 1853. It’s got a playground, ball fields and a cool pavilion:

The third is the mid-century Amberg Park (1963) near Gustine and Keokuk which has 2 nice ball fields and a playground. From the City of St. Louis website:

The southern half of the park site was purchased by the city in January of 1962 at a cost of $55,250 from the St. Louis Board of Education, who sold the city the northern half of the contiguous site for $55,250 in August, 1963, following a fire which destroyed the Dunnica School building. Funds for the purchase of the site came from the 1944 and 1955 bond issues. Amberg Park was designed by Landscape Architect, Robert E. Goetz and Associates in 1966 and construction began during January, 1967. The park was named in honor of Richard H. Amberg (1912-1967) for his personal distinction and his contributions to the parks and playgrounds of the city. He also served as publisher of the Globe Democrat.

Other points of interest if you are to explore Dutchtown include the architectural masterpiece Cleveland High School built by William B. Ittner in 1915, closed since 2006 (FAIL!). Read up and gaze upon its beauty here and here. And here are some of my shots:

Right next to Cleveland is the smallest roundabout I’ve seen in the entire city. Check this out:

There are other public schools in Dutchtown including the Mel Carnahan School of the Future, Scruggs and Meramec; and the former Catholic school St. Thomas Aquinis:

Other curiosities of Dutchtown include the Stork Inn at Virginia and Taft (now an architect studio) and Busch’s Inn at Grand and Meramec (now The Feasting Fox pub) which make up two of the three South Side Anheuser-Busch tied houses (The Bevo Mill is in, you guessed it, The Bevo neighborhood):

One of my favorites in Dutchtown is this former cinema built in 1910 at Virginia and Vermont. It is currently owned by the city’s Land Re-utilization Authority. Got a development plan and the funding to back it up? This baby can be yours today:

Above all, Dutchtown is a residential neighborhood. And you can’t deny the fact that it has a mix of nearly all styles of brick homes that St. Louis has to offer. Here’s what I mean:

There’s a lot to like in Dutchtown, and reason to believe that some of the more negative signs of population loss, random violent crime and dubious properties are going to get better. I mean every neighborhood has a silver lining right:

Dutchtown (or at least a good part of it) has a good alderman in Shane Cohn and there is visual progress being made, especially in the formerly rough/trashy multi-unit apartment complexes near the Holly Hills border on the south east edge of the neighborhood.

And there appears to be more development on the way:

St. Mary’s High School recently acquired some of this property to expand it’s ball fields; and they maintain a handsome campus:

The twin steeples of St. Anthony Padua Catholic church on Meramec in the Mount Pleasant neighborhood loom over Dutchtown and can be seen from many great vantage points:

The neighborhood was designed with such grace and dignity and functional and elegant design, everything seems to fit just so. Even the firehouses are works of art:

My favorite Dutchtown church is the mid-century mod Resurrection of Our Lord Catholic church at Meramec and Hydraulic:

There are other examples of MCM to appreciate:

The untapped potential of Dutchtown’s commercial corridors is huge. Meramec looks really good and is soundly intact, with a nice mix of residential and business. Some stretches, especially between Grand and Compton have a plethora of charming, yet largely empty, storefronts set to make this an even bigger attraction:

Chippewa as a whole is largely abandoned; but again, has huge potential. There are still a handful of businesses holding on. In many ways, Chippewa is an indicator of how far the neighborhood has slipped in the last 20-30 years. Here’s a mix of what you’ll see along Chippewa today:

And finally, the remaining 2 commercial corridors of Grand and Virginia sit in wait for more development and tenants to once again make this a vibrant and active neighborhood. Unfortunately Grand took a beating in Dutchtown, the vacant fast food joints and the former National Supermarket have left holes in the original fabric of the neighborhood. The cost of these demos to make way for these businesses is steep. Original structures are destroyed to make way for the newest and greatest drive thru junk food restaurant or supermarket. But as we know far too well, these businesses are temporary in their existence yet the holes they leave are forever. You can’t rebuild today what America once was capable of building. On the other hand, Virginia Avenue is far better off with quite a bit of remaining business and original storefronts.

The alarming trend of population loss in Dutchtown could make this area a canary in the coal mine of sorts for South St. Louis in general. Dutchtown could be a decent case study in the future of South City. Will it continue to thrive and attract new generations of residents willing to maintain and improve the area ala Tower Grove South, or will it go the opposite direction attracting cheaper and cheaper rents, with fewer and fewer owner-occupied folks and landlords living in the neighborhood. The bones of a great neighborhood are there. This could be the ultimate city neighborhood. Will it get better or worse? Only time will tell. One thing I know for sure, the next 10 years will be critical for Dutchtown in turning the recent tides of negativity to a more positive, welcoming place for all. Keep your eyes on Dutchtown, it’s ripe for improvement and it’s up and coming. We need a strong Dutchtown for a strong south side and a strong city in general.