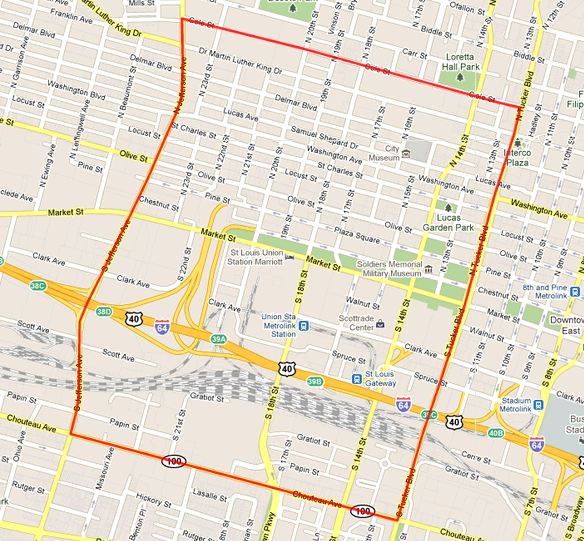 Most people in the region, and even city residents consider DTW to be Downtown. In fact, DTW doesn’t even have it’s own link on the city website, it simply points to the DT website. This is yet another data point toward my hypothesis that St. Louis could consolidate many of its neighborhoods down from 79 to ~50. But make no mistake, this is an important part of the city, and one of our greatest, most high-profile parts of town. It is a distinct neighborhood gaining population and is an extremely important connection between Downtown and the burgeoning Midtown area giving us a more and more impressive central corridor.

I’ve struggled with how to best represent the most important neighborhoods of St. Louis. The Central West End, Tower Grove South, Downtown, DTW are all large, overwhelmingly beautiful neighborhoods. You could almost take a picture of every building. These are the places that define us now and will define us in the future. To many in the region, these are the only neighborhoods they will see and judge us upon.

This is one of maybe 4 neighborhoods in St. Louis where much of the beauty and nuance is toward the sky. You really have to look up to notice all the amazing architecture that’s going on and still exists in it’s original glory. DTW has a big-city feel and the influx of new residents makes this part of town way more bustling with street level activity compared to 10-15 years ago. I took my photos on a Sunday morning; and, while there were very few businesses open, there were many pedestrians jogging, walking dogs and strollers and generally commuting by foot and bicycle. It was really good to see.

So, I will apologize in advance for the length of this post. It’s hard to capture the most impressive neighborhoods with just 100 photos. This one has more than 200…everywhere you turn there is something worthy of note or contemplation. Let’s start with the light industrial sites visible from Chouteau Avenue on the south. Here’s the progress on the future home of the sheet metal workers union and DynaLabs:

There are other businesses along here including paint companies, Nestle and of course Ameren UE. I was stopped by Ameren guards and they insisted that I not take pictures of the Ameren campus for security reasons….damn it Al-Qaeda, you win again. They were very cool about it though, and I obliged. But with so many images of Ameren available online, I figured I’d toss in a few:

Vin De Set, The roof top seating has some of the best views in town:

More from the south side of DTW:

And then there’s the eastern side of DTW bound by Tucker Boulevard or 12th Street which has some familiar institutions including a Federal building just north of I-64, the current…soon to be former Police Station and Academy dating back to 1927:

Here’s the new police station which is also in DTW, on Olive, the building was purchased from AG Edwards/Wachovia/Wells Fargo:

Here are a couple older images of the structure in its original state. The central tower and lesser spires that face Tucker on each end were removed in 1938 due to structural issues:

There are a couple butt-ugly installments along Tucker including the out of place US Bank branch (one of the worst in town) and the unfortunate and hideous parking garage that hugs the awesome Park Pacific building that is under renovation. Yeah, yeah, two steps forward and one back, right. But really, this garage is one of THE most hideous in the entire city and it faces a major north south street in a high profile part of town. I will assume the architect will not have his/her name etched into this one as our proud fore-fathers did on their masterpieces of the Industrial Age. The Park Pacific building is one of my favorites in town though and I’m happy it’s finding new life:

The garage falls well short of previous renderings, which often happens, but looking closely, maybe they’re not too different. Hopefully they can build on top of the garage as shown:

The north side of the neighborhood is largely light industry and shipping/warehousing operations that are not really worth photographing. There are some other interesting sites though, including the Franklin School designed in 1909 which was handsomely converted to senior apartments.

Other sites on the northern edge of DTW:

Who wants some Skittles and a Marby Red?

I’d love to know the story on how this flounder survived in the middle of a surface parking lot:

The northern edge has the highest concentration of open lots, cleared land and buildings lying in wait for their turn to re-shine:

But it is the heart of the neighborhood that has seen the most renovation and excitement. You could say Market Street is the heart, and make a strong argument with Union Station, the Peabody Opera House, City Hall, etc, but to me Washington, Locust and Olive have become the real heart of DTW.

So from here on out, I’m just going to try to show you what I think is cool about DTW and you can go out and explore the rest. I won’t bog this down with addresses and current uses of the buildings, I’ll just let the pictures tell the story. Here goes:

The Plaza Square urban renewal development. One building has been redeveloped as Blu City Spaces. The blue paint brings back an original color:

Was this a grocery store at some point? If anyone knows what sign used to adorn the top, please let me know.

Remember to look up, there’s interest on nearly every building cornice:

Yes, that appears to be a hippopotamus:

Peak through the alleys and down the streets to view the awesome urban vistas:

There are many, many short 1 and 2 story blond brick structures of note in DTW:

My favorite spots in DTW:

My favorite spots in DTW:

I’ve got to mention the other major institutions in DTW. The Central Library is undergoing a $74M facelift:

The stacks were notable for their glass floors and pneumatic tubes that once delivered books to the circulation desk (photos from Flickr user Brick City):

The stacks have now been cleared to make way for a new lobby (demo photo by the Post-Dispatch):

The library under construction:

The Scottrade Center is home of the St. Louis Blues…LET’S GO BLUES! And the former Kiel Opera House, now called the Peabody Opera House, is undergoing a fantastic renovation and is scheduled to open fall 2011. Having sat empty for years, the opera house remains in incredible condition. It will be an incredible addition to the Downtown West neighborhood.

An amazing pre-renovation shot from the Post-Dispatch. Incredible considering this space has sat vacant for years:

And another pre-renovation shot, this time the lobby by Brick City: 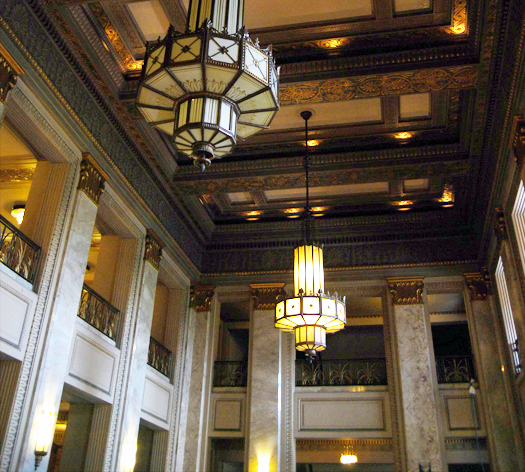 DTW is also a hub for mass transit with connections to the blue and red lines of the MetroLink which stops at Union Station and the Civic Center. It’s also home to the city’s comprehensive transit hub with Amtrak and Greyhound. The Megabus doesn’t use this station but does stop nearby.

The Union Station stop is at the south end of the train shed:

I like to admire the outdoor art at the MetroLink stops, it reminds me that we decorate the things we hold dear and value as important places.

Union Station is as sharp looking as ever and has huge potential. This place could be so much more than it currently is (an aging indoor 80’s mall concept for tourists). The former train shed is a beauty too.

The structure is still beautiful, but it has lost nearly all of its context. The train shed and station were once the center of life in the city. Quite literally the gateway to the Gateway City:

The Gateway Mall through Downtown West isn’t the most inspiring of public places. There are a few gems though, most notably The celebrated Meeting of the Waters by Carl Milles. First, some background:

Civic Improvement League, organized in 1901, called for razing the area to create a central parkway. The 1920s saw the clearing out of a portion of the area with the creation of the Soldiers Memorial and Plaza, Kiel Auditorium, the widening of Market Street and the construction of the Aloe Plaza opposite Union Station. Development of the Aloe Plaza was made possible by an $87 million bond issue in 1923. The fountain is an allegorical depiction of the Meeting of the Waters, the Mississippi (main male figure), the Missouri (main female figure) and the seventeen main tributaries which empty into them (water sprites, mermaids, and fish).

The sculptures and fountain were unveiled May 11, 1940 and purportedly cost $225,000 to construct. First photo by Flickr user G. O’Graffer.

The surrounding blocks of the Gateway Mall have been reinvisioned over and again. The latest Master Plan can be read in the nextSTL Scribd library. Plans call for more active uses for the space, including the possibility of an urban mini-golf course:

The Soldier’s Memorial Military Museum open to the public since Memorial Day, 1938:

And of course the unmatched, amazing City Museum and Lofts. Whenever I talk to people about what it’s like to live in the city vs. the suburbs in reference to having kids and raising a family, I use the Magic House in the palatable suburb of Kirkwood, MO which is a tidy, vinyl-sided, safe, sanitary place to take the kids for a fun day of activity. Then you contrast that with the City Museum, a freakshow of creativity and imagination. It’s gritty, beautiful, dangerous as hell, kind of scary, challenging and very VERY unique. It’s a totally great city experience and defines what I like about St. Louis and think is superior to the suburban upper crust suburbs. This is a must see place for adults and kids of all ages. You can also live in the City Museum Lofts! It’s not possible to show off City Museum in a few photos. You simply must go there:

How about a wedding on the roof? This shot’s by Ryan Gladstone Photography:

Cheers to Downtown West for the gain in population and loads of activity from 2000-2010! I hope to see more and more choosing to call this place home and more and more rehab and infill throughout the area.