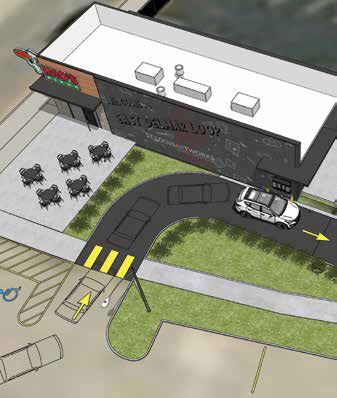 Update March 9, 2022 – The proposal goes before the Board of Adjustment March 16th 1:30pm (Agenda – one may attend and testify via Zoom ) for consideration of zoning variances.

Imo’s is proposing a location at the corner of Delmar and DeGiverville in the Skinker DeBaliviere neighborhood near the Delmar Metrolink station. They purchased the property, 5956 Delmar, from Joe Edwards in May 2021 for $140,000 according to city property records. The single-story building would occupy the northeast portion of the parcel. A patio for outdoor dining would be to the west along Delmar. Entry and exit for a drive-thru would be accessed via DeGiverville. There would be no indoor dining area, just an order counter. Patrons utilizing the drive-thru would place orders via website or app and be notified to come pick up their order. Patrons could also walk in to place and/or pick up an order at the counter. The Skinker DeBaliviere Community Council voted to support the proposal, which will need zoning variances, at their January 10th meeting. The architect is V Three Studios who designed one at 8337 Maryland in Clayton which has no indoor dining nor a drive-thru. If built, this would be the first new construction east of the Metrolink tracks since the Gothan Annex at Delmar and Hamilton was completed in 2013.

This vote of support by the SDCC board comes off the heals of the vote not to support the Opus 14-story apartment building at Delmar and Skinker in December. The proposed land use at Delmar and DeGiverville is quite out of line with and antithetical to the goals of the Skinker DeBaliviere Neighborhood Plan, the Delmar and Forest Park Station TOD Plan, the Delmar Loop Area Retail Plan and Development Strategy, the Delmar Link redevelopment plan ordinance, the draft Form-Based Code (FBC) for Delmar and DeBaliviere currently being worked on, and current zoning.

NextSTL – 2013 – The Best Transit-Oriented Neighborhood in St. Louis is Completely Planned, Now What?

The Skinker DeBaliviere Neighborhood Urban Design and Development Plan calls for much more than a single story drive-thru here. The vision of the plan:

The vision for this area can be described as a vibrant, dense urban residential neighborhood with mixed-use edges connected to the city through enhanced transit, safe pedestrian and bike access, and alternative
modes of transportation. It embraces the diversity of people, housing types, transit options, and public spaces, creating a community that is family-friendly, multigenerational, and active with cultural, social, and recreational
amenities. The vision embodies a holistically sustainable approach to development and quality of life in this great urban neighborhood.

The proposal falls far short of that vision. The plan identifies “intersections are dangerous” as an issue for the neighborhood. The drive thru exacerbates this issue by encouraging more car traffic and conflict with people as they access the drive-thru. The plan cites ideas such as “TOD at Delmar and DeBaliviere (stations)” which this is not. It is a great example how not to leverage transit. Also the proposal’s meager land use intensity fails short of adding “identifiable street character for eastern Delmar corridor.”

“Continue the ongoing revitalization of Delmar Boulevard and DeBaliviere Avenue as a mixed-use, urban, multi-modal corridor.” The proposal is not mixed-use. The drive-thru is not urban. It promotes the transportation mode that needs to be discouraged.

“Promote community health, safety, and environmental sustainability.” Promoting car use is neither-

The neighborhood development framework calls for creating “a vibrant corridor along the with [sic], infill development and building rehab that unites adjacent neighborhoods and provides new housing and needed amenities.” (p. 16) Idling cars waiting to pick up their order is not vibrancy. Promoting Delmar’s use as a car sewer inhibits uniting adjacent neighborhoods. The patio helps, but patrons will be siting next to the cars picking up. With no indoor dining, patrons will have to go elsewhere to eat in inclement weather. there is no new housing. Needed amenity? The plan calls for needs like a pharmacy, nothing about drive-thru eateries. In fact, considerable effort has been put into removing similar land uses at Delmar and Skinker.

All three options presented in the plan for the area around the Delmar Metrolink station call for “Delmar between Hodiamont and Hamilton is infilled on both the north and south sides with3 to 8 story mixed-use buildings with commercial on the ground floor and residential above and surface parking
behind” (p. 167-9)

The proposal here misses the target set by the plan entirely.

INCREASED INTENSITIES OF RESIDENTS AND EMPLOYEES: The Station Area Plan should increase ridership and area density by adding a critical mass of new residents and workers in the area. These will be associated with development opportunities at the Delmar Loop Station, Forest Park–DeBaliviere Station, and Metro Garage, as well as incremental infill development of vacancies in the surrounding neighborhoods.

URBAN FORM & QUALITY:
The Station Area Plan should build on the existing character of the East Loop, Skinker DeBaliviere, West End, and DeBaliviere Place neighborhoods by introducing compatible new development with heights and forms that restore the former grandeur of Delmar and DeBaliviere as walkable, neighborhood-supported commercial corridors. Furthermore, the Station Area Plan should build on the existing assets of the surrounding neighborhoods by utilizing building types and material qualities compatible with the characteristics of the early twentieth century brick structures, streets, and public spaces. This approach will establish a coherent image for the corridor and neighborhoods with unique character and a comfortable sense of place.

Other than having a brick façade, the proposal doesn’t come close to this vision.

This proposal bears no resemblance to transit oriented development. It falls woefully short of leveraging the investment we’ve made in transit here. It is inappropriate for a site a block from a Metrolink station.

1|Mixed-Use Development
To create a thriving neighborhood edge with a safe and welcoming physical environment, mixed-use development, particularly residential, should be prioritized for the large undeveloped parcels along Delmar in this district. Built at a moderate density and including larger units to attract families, such development would offer an alternative to the aging housing stock located north of Delmar. Additionally, the ground floor of new residential developments in this District should be designed to accommodate retail
or office space,

Again no resemblance to the plan.

The Delmar Link redevelopment area plan in ordinance 63183 forbids this use.

The Delmar Loop and Forest Park DeBaliviere Station Area Form-Based District (project website) which hasn’t been implemented yet, calls for a minimum of three stories, 40 ft and max of eight, 90 ft at this location (p. 3-12). The build-to-lines must be zero feet for the first five stories for at least 85% of the frontage on both the primary and side street.

The building types the FBC would permit are podium buildings, commercial block buildings, flex buildings, live/work units, and liner buildings. The proposal bears no resemblance to any of the examples of each type shown in the plan. See examples below

The parcel is currently zoned F- Neighborhood commercial district which permits restaurants and carry-out restaurants that meet the site requirements specified in Section 26.40.026–

1. For lots that are contiguous with or directly across a street, alley, public or private easement from a dwelling district:

f. A minimum of 15 parking spaces shall be provided on a lot. Parking areas shall be screened at all property line with a 10-foot landscaped strip contiguous with or directly across an alley or public or private easement, other than a public street, from any existing residential use or dwelling district. Parking area screens shall consist of a minimum 2-foot-high berm and a masonry or wood barrier that is at least 70 percent opaque and not less than 6 feet in height and shall be maintained in good order.

The parcel is 7,762 square feet, adjacent to a zone A across the alley to the south and doesn’t have 15 parking spaces (no that I’m a fan of parking mins all of a sudden). That’s why they have to get variances.

This proposal represents another example of development planning bait and switch. It in no way comes close to the bounds, goals, and vision set forth in the various plans for the area. You’d think this would be a instant no, given what the plans say and past no’s to similar proposals elsewhere. It fails miserably to leverage nearby transit, which should be a concern for the whole city, if not the region. Regrettably the Skinker DeBaliviere Community Council couldn’t be counted on to be stewards of the expression of the community codified in the plans they spent a lot of effort on. It’s disappointing to see this supported when juxtaposed to what is sought by the plans. Let Ald Clark-Hubbard know your thoughts on the proposal and look for it on an agenda of the Board of Adjustment (where zoning variances are heard) and possibly the Preservation Board (the Cultural Resources Office will review for compliance with the historic district ordinance) for opportunities to share your thoughts as well.