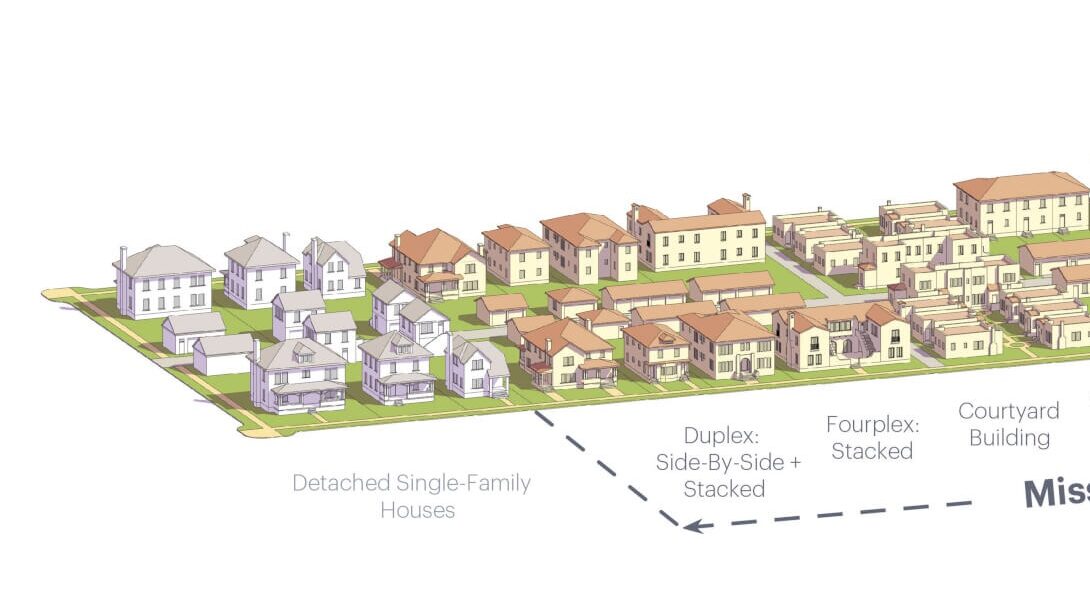 On Tuesday voters in Webster Groves will consider Proposition 1 on whether to repeal allowing two families on more parcels. In May the WG City Council approved changes to allow them on A4 zoned parcels, almost 70% of homes in the city, though not all parcels designated A4 meet requirements to accommodate a two-family. Owners of lots at least 7,500 square feet and 60 feet wide would have the freedom to build two families. Before the side of the block a parcel is on would have to have at least 40% two or more-families for a new one would be allowed. Opponents of the change gathered enough signatures to put the matter up for a vote on Tuesday August 3rd.

Draft Ordinance 9145 – I don’t know if there are any differences between this and what the WG City Council passed.

Here’s a map that show the A4 lots that are at least 7.500 sf in green. There is also the requirement that a lot be 60 feet wide, so there are fewer that qualify than those in green. nor does it show which areas already qualify for two-families (the 40% bit).

Resident Norma Rufkahr said the value of all homes in A4 will “undeniably be adversely impacted.” She said residents should not find their homes worth less “due to an agenda by a tone deaf group of politicians agitated to action by the small, aggressive and vocal minority.”
…
Farrell Carfield is with the Alliance for Interracial Dignity. Carfield said her group rejects “unsubstantiated scare tactics claiming property values will be damaged by improving the variety of housing stock available in town.”

The zoning change allows the smallest step into the range of “Missing Middle” housing configurations. Those are the housing types in between single family homes and big apartment buildings. St. Louis City and some suburbs are blessed with many examples in the many 2/3/4/6 families, often on lots smaller than these in WG. Check out missingmiddlehousing.com, where the graphic at the top of this post came from. They have descriptions and photographic examples of the missing middle types. The zoning change in WG allows either Duplex: Side-by-Side or Duplex: Stacked.

The idea is that with more housing options there are choices that fit more life circumstances like household size and income, and one doesn’t have to move very far to find them thus they are less likely to leave their community. For example the empty-nesters who want to downsize might be able to move down the street or within a few blocks into something that suits them.

There’s also the benefit of increasing land productivity and thus the tax base to pay for city services and infrastructure. And more people around to support a neighborhood-scaled business which adds to walkability which brings all its health, safety, environmental, and financial benefits.

How many duplexes might be built due to this zoning change? Probably not as many as proponents hope for or opponents fear. Nor at price points as low as proponents hope for or opponents fear. There aren’t a lot of vacant lots in WG. Then there are tear downs. Unless there’s a house with a lot of deferred maintenance or a calamity like a fire that significantly dimishishes the home’s value, the numbers to make a new build are tough. There are tear downs occurring in WG; could some of them have become duplexes? I suspect the numbers don’t have to make as much sense for someone wanting to build a new home for themselves at a certain location than for a developer looking to make a profit. At the moment there is one house in WG listed for sale under $200k.

It sounds like from the editorials in the W-K Times, the pro and con websites, and conversations with friends who live in WG that it’s a full on NIMBY/YIMBY debate. It will be interesting to see how the vote turns out!

Shall Ordinance Number 9145, set forth by title below, be rejected?
“An Ordinance Amending Chapter 53, the Zoning Code of Webster Groves, By Amending the Use and Dimensional Regulations for Single Family Attached and Two Family Dwellings in the “A4″ Seventy-Five Hundred Square Foot Residence District in Sections 53.070 Et. Seq.; Section 53.100 and Amended Definitions Related to Those Uses in Section 53.020 and Matters Related Thereto.”

It’s confusing as a YES vote means repealing the zoning change. A NO vote means you want the freedom to build two-families on more parcels.