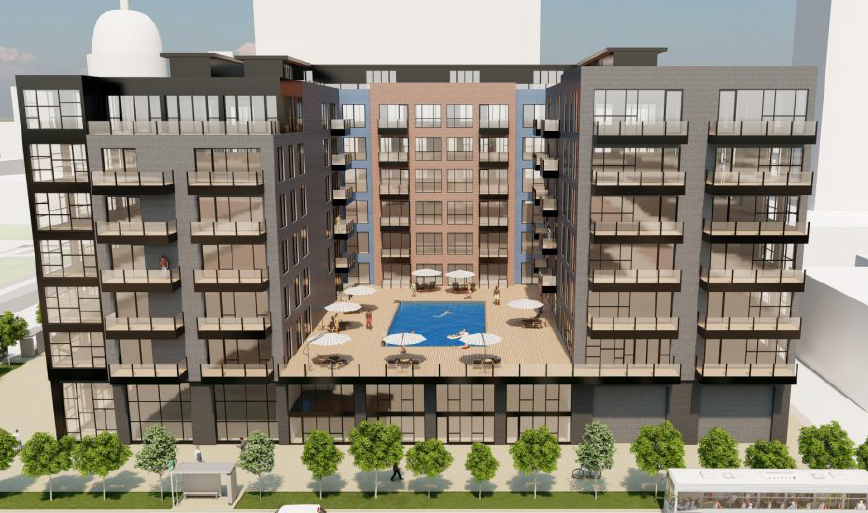 Lux Living plans to replace the Optimist International buildings at Lindell and Taylor with a 7.5 story 150-unit apartment building in the Central West End. It consists of six floors of apartments in a U shape with an amenities deck over two levels of parking (one level underground), meeting the city-mandated one space per dwelling unit, accessed from a curb cut on Lindell and from the alley. Lux will not be seeking a tax abatement.

Lux Living has been on a building spree, thus far completing projects in Soulard and DeBaliviere Place. In addition to this in the CWE, they are planning to replace some of the Drury-owned properties in Forest Park Southeast.

The site is in the Central West End Certified Local Historic District and in a Preservation Review District, thus it went to the Cultural Resources Office and will go before the Preservation Board at their July 26th meeting (Agenda). CRO staff have recommended withholding preliminary approval-

That the Preservation Board withhold preliminary approval of the proposed demolition as the Optimists International is a High Merit building under the Preservation Review Ordinance; a contributing resource to the Central West End Historic District and a significant element of the historic architecture of the City of St. Louis

In 2013 CRO surveyed over 2300 Mid-Century-Modern (MCM) building in St. Louis. The process identified 25 highly significant buildings. The Optimist Pavilion was one of them.

The architectural quality of the Optimist Pavilion is High Merit; the adjacent building at 4494 Lindell is considered Merit. Loss of the Pavilion will entail a significant cost to the architectural history of the City.
The Pavilion is a distinctive design with expressive, triangular-section concrete columns connected to cantilevered floor slabs; the exterior columns define wall bays on the east and west sides, containing pairs of narrow slot windows that extend from floor to ceiling. The primary Lindell façade has the same window pattern flanking a central section filled by an aluminum storefront assembly. The eastern building at 4494 is a more restrained work that echoes some detailing of the Pavilion.

The building is on a street composed of a mixture of architecturally significant buildings from the turn of the 20th century; and many examples of Mid-Century Modern that were in the Survey’s highest category: the Chancery; the AAA building; the Engineers Club; and a number of high-rise residential buildings.

As for the new building, CRO determined that the materials do not comply with the ordinance being primarily metal panels. The ordinance permits dominate materials of stone, brick, concrete, and stucco.

In terms of land productivity, the proposal is a boon. The Optimist buildings are tax-exempt. The replacement joining the tax roles at full value would buy a lot of textbooks for SLPS schoolkids. Property taxes would probably be near $1M a year. Plus the economic activity from 150+ residents and the safety, health, and environmental benefits of more people living in a place that coerces less driving.

A proposal by Covington in 2014 fizzled after the proposal failed to receive support for tax abatement.