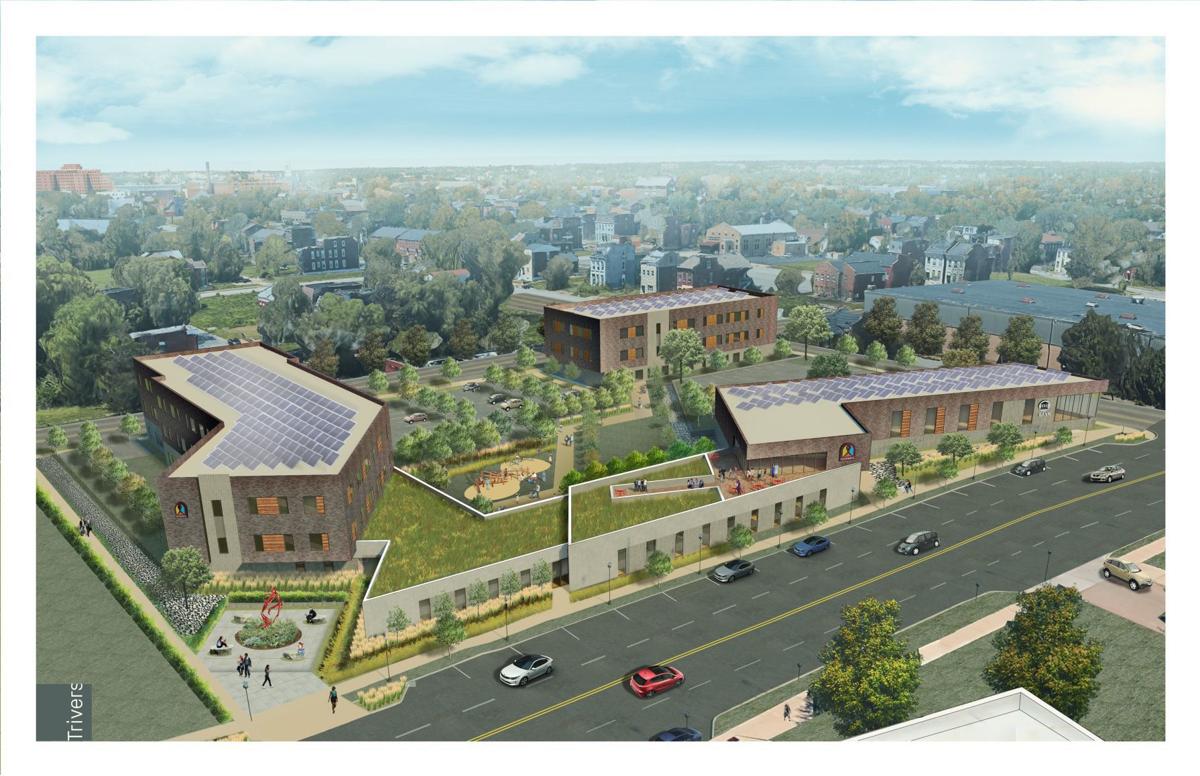 Building permits totaling $15.4M were issued for Doorways, an interfaith nonprofit that provides housing services for people living with HIV/AIDS, on Jefferson in the Jeff-Vander-Lou neighborhood. The development will host its headquarters, currently on Maryland in the CWE, and 50 housing units. The Missouri Housing Development Commission approved $6.28M in federal Low Income Housing Tax Credits (LIHTCs) and the SLDC approved $8M in New Market Tax Credits to help fund it. The total cost of the first phase is $22M. The organization said they may add more housing in a later phase. It looks like there’s a courtyard, green roofs, and solar arrays in the rendering.

The St. Louis Board of Alderman unanimously passed BB 68 which vacated the two alleys and Stoddard St between Elliot and Jefferson. This is regrettable, as someone heading to or from the bus stops on Jefferson will have to go around this superblock (or just drive if they have the means to throw away wealth on a car). Also, the loss of the alley on the southern block makes more likely curb cuts to serve anything that might go there. #Healthegrid

We’ve seen a concerning erosion of Jefferson Ave and its adjacent land uses turning the area into a series of fortress islands connected by cars. Jefferson was widened in the 1960s during the misguided urban renewal, spread-out the region, driving coercion efforts of government. Jefferson went from street to stroad, and is creeping towards highway.

Recently St. Bridget of Erin church, built before the Civil War, was needlessly demolished across Jefferson from the Doorways site. Cole Street was severed for a parking lot for the SLMPD Central Patrol. The St. Louis Fire Department HQ is set back and doesn’t line up with the street grid. At least the entrance faces Jefferson. It seems all hope is lost for anything to happen with Northside Regeneration’s land at the Pruitt-Igoe site. There appears to be and RV storage facility to the south. The NGA West removed several streets that met Jefferson.

Gateway Elementary, La Salle Middle, Carr Lane Middle schools, and KIPP Inspire Academy take up a lot of land. They for the most part face away from Jefferson which is understandable because kids and cars don’t mix. And streets that could connect to the east are vacated for parking.

Some of the low-productivity auto-oriented parcels could be redeveloped into CITY (maybe even not tax-exempt as the government and not-for-profit owned parcels are), let’s hope, but we’re certainly not setting ourselves up for success.

Nextstl – What Should Be: Pruitt-Igoe as a Walkable, Mixed-Use Neighborhood

Jefferson will be rebuilt with the help of a federal BUILD grant of $7.95M. The stoplight at Stoddard will be kept with pedestrian refuges and beg buttons. It will be nicer for sure, but with few useful walks to be had given the adjacent land uses, it will remain primarily a traffic sewer.

All the investment is great, but let’s not kid ourselves; we’re not building CITY here. I’ll leave you (again) with my favorite quote from Death and Life of Great American Cities by Jane Jacobs. The decisions along Jefferson are yet another example of the thousands of little decisions that erode our built environment.