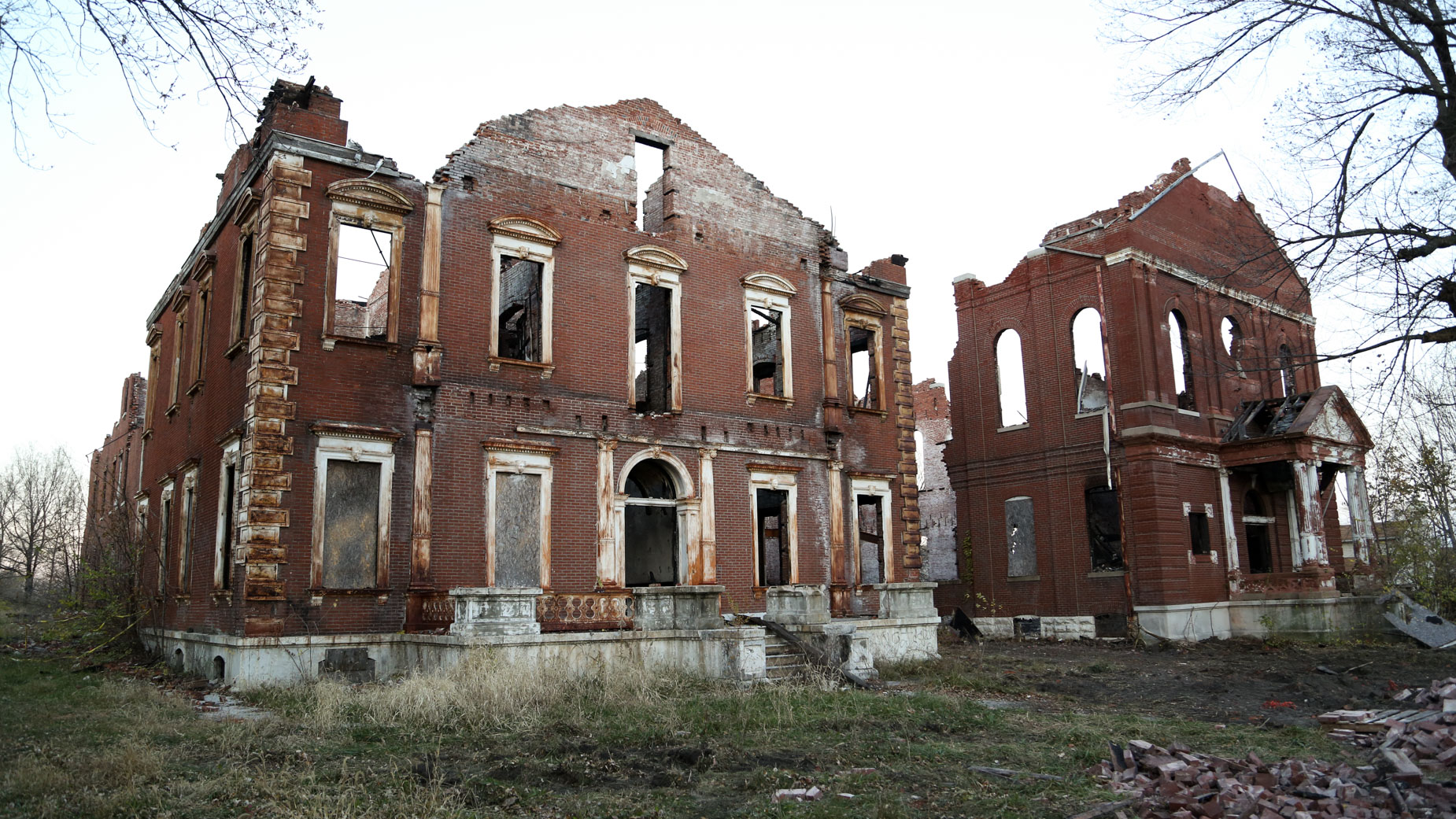 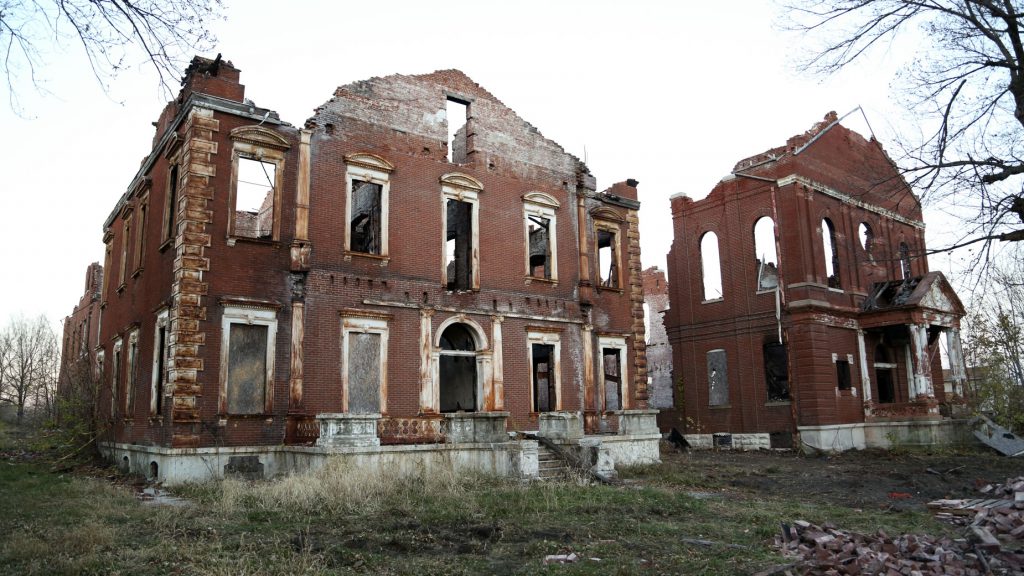 Over on Cass Avenue, the James Clemens, Jr. House and its attached wings still tell St. Louis about its material past. A fire in July removed most of the wood, and shook loose parts of the walls, but the red brick, cast iron and sandstone that remain in place are defiant. The ruination only amplifies the building’s documentation of antebellum ambition, natural advantage (the materials all are from within 100 miles) and implacable forces of urban decline. A building like this is as much biography as artifact.

Yet the Clemens House likely will meet demolition soon – with the headache ball at a headlong sprint. Instead of a ripe, rusted, charred but informative biography, full of a frank reminder of what has actually happened, the city will get the open blank book of a vacant lot. To some people that is a more hopeful sort of landscape, but the passage will be from one-of-a-kind to one-of-at-least-10,000.

Of course, the parcel created will belong to Paul J. McKee Jr.’s Northside Regeneration land speculation project, which has owned it under various entities since 2005. After pressure from the last mayoral administration to preserve the Clemens House, McKee and developer Robert Wood attempted to secure tax-exempt Missouri low income housing bonds for an adaptive reuse, but did not succeed. McKee’s company did some minor work to stabilize the building around that time. By the time that McKee entered the story, the cost of rehabilitation was already very high due to accumulated deterioration.

Thus, the impending loss is not a simple narrative of a developer who received public largesse marked for development, and has yet to develop much. That’s just the last chapter. The earlier chapters mark a degradation of a building whose increased recognition as a cultural heritage site only seemed to mirror its mounting fatality. The Clemens House thus joined only many other significant works of architecture trashed by a surprisingly – and selectively — unsentimental city.

But, enough lament. There’s no use crying over burned-out abandoned buildings in St. Louis. The tears would raise the river over the levees. 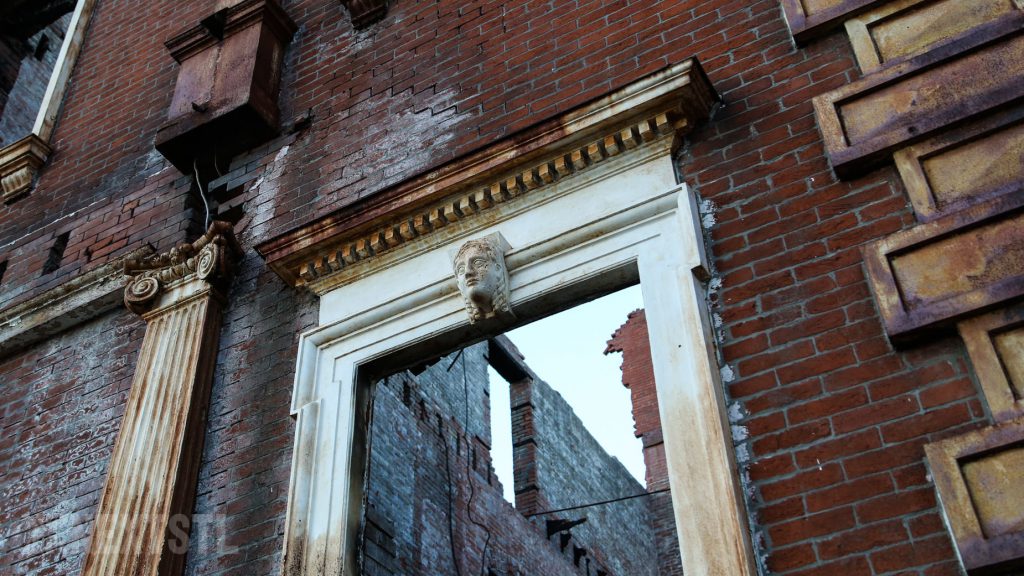 Instead, what if we conjured a future in which the Clemens House remained around to provoke our memories and experiences? What if we pushed past the managerial tropes of public-safety demolition and architectural restoration following the traditional path of historic preservation? In some ways, these have been the questions since the house lost part of its chapel wing in 2008. Short of a benefactor, the house was an iffy proposition for profit-based preservation.

Playing along with a city whose sentiments disfavored the glorious restoration of the Clemens House, but whose residents still formed a curious public for the house, there is a path of letting the house stand as a ruin. Some work is necessary to make this endeavor safe, of course. Open foundations can’t be left in place, and sections of unsupported wall should come down (or be built back). But nothing lavish need occur. Just do enough to allow public access, and let the house remain part of the city’s heritage. 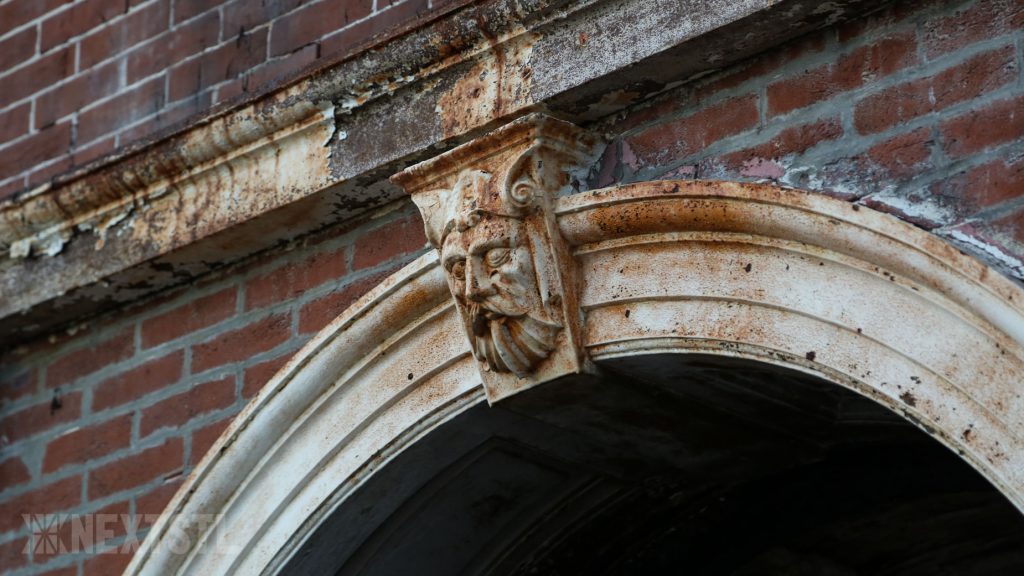 Not every building is worth such disposition, but the Clemens House is a long draw on St. Louis’ unresolved cultural past. The Palladian architecture of the original mansion, built in 1860, included the nation’s most refined and extensive use of cast iron in residential architecture. Kindred houses, such as Drayton Hall in South Carolina or the Myers House in Florissant, deployed wood for ornament. The Clemens House relied on native gray iron, which formed sculptural glories including the repeated keystones featuring the likeness of Roman deity Juno — with a single Janus over the entrance. (Some sources repeat the myth that the female face is the death mask likeness James Clemens’ wife Eliza Mullanphy, who died in 1853, and for whom no record of a death mask or resemblance to a common likeness of Juno can be located. Heresay makes better history, some times.)

The Clemens House also touches our racial fissures. Clemens was an unrepentant pro-Confederate voice and slave owner. His views on white supremacy were cruel and strident, and he had slaves on this property. Clemens even advised his son-in-law on evading arrest after whipping a slave to death. Perhaps the fire was a needed expiation of this local symbol of racism. More favorably, perhaps, is Clemens’ legacy as a savvy merchant and benefactor; Clemens’ gift allowed Samuel Clemens’ father John Clemens – a cousin – to buy back a parcel in Hannibal, Missouri for construction of a house where Mark Twain would be born. (Mark Twain visited his second cousin James Clemens once, but not at this house – another part of the mythology, which has Clemens as the “uncle.” Myths draw people to these sites.)

Later associations of the property also speak to intersections of St. Louis: the Sisters of St. Joseph used the property as a convent after 1885; the Vincetian Fathers used the property after 1949, and housed Chinese immigrants here; the Catholic Workers were located here for a spell; there was a Baptist soup kitchen; then, at last, the Universal Vietnamese Buddhist Association purchased the property and considered turning it into a Buddhist monastery and retreat. This property helps us read architectural, political, cultural and religious history – as well as the denial of resources to north St. Louis in the last part of the twentieth century. 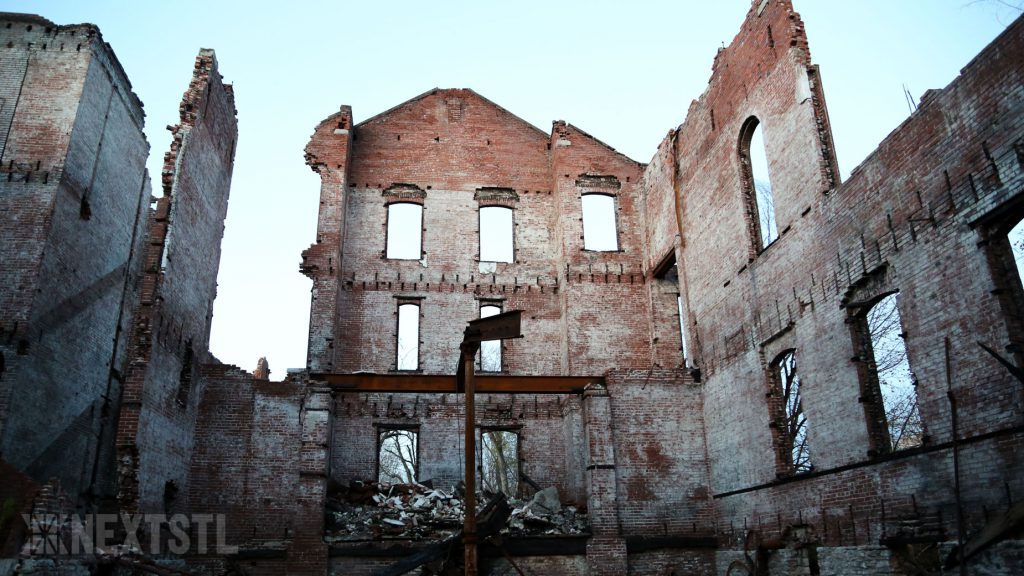 If the retention of the Clemens House as a ruin seems starry-eyed, consider some local examples. The former Delmar Baptist Church (1886) on Spring Avenue, after fire, has been partially preserved as an open ruin by Grand Center, Inc. Just a few blocks from the Clemens House, in far better shape, the vacant sanctuary of St. Liborious Roman Catholic Church (1889) have become an indoor skate park seen on Vice TV, among other places. Bob Cassilly’s Cementland, unfinished for now, tantalized locals as a ruin with a lot of stories left to write. Across the river, for over a century, the State of Illinois has interpreted the remains of French colonial Fort de Chartres as a ruin, and provided public access. All of these places could well have been demolished. 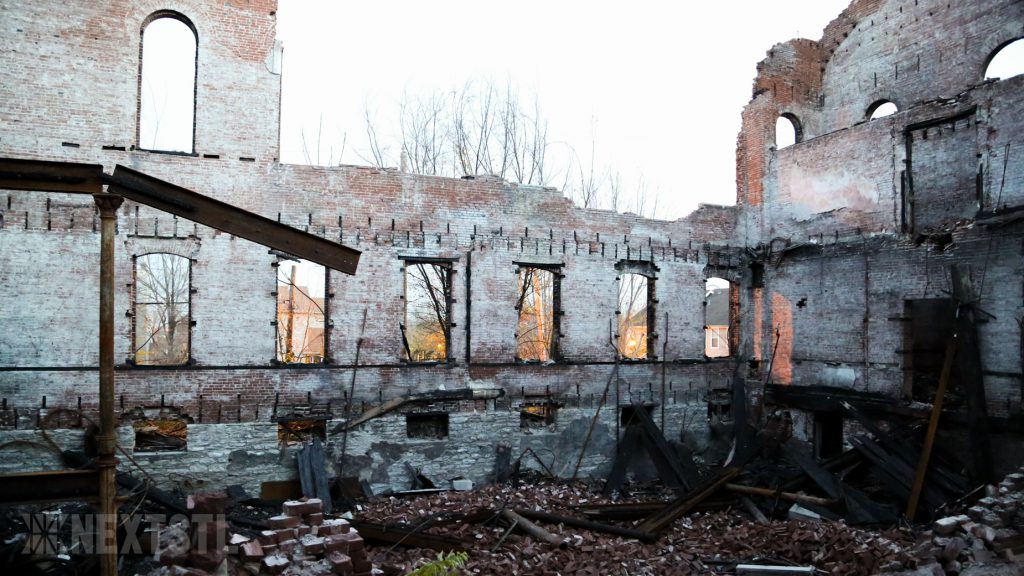 Further afield, a survey of plantation houses – comparable to this one in ornate architecture and unquiet cultural symbolism – turns up examples including the remaining colonnade of Windsor Place in Mississippi, Rosewell in Gloucester, Virginia, and Barboursville in Virginia. Thomas Jefferson, whose architectural philosophy derived in part from Clemens House inspiration Palladio, designed Barboursville, which completed in 1822. A fire in 1884 sent the Barbour family elsewhere, but the building remained for contemplation of its aura and architecture. Preservationists lately have extolled the planned treatment of Virginia’s ruined Georgian mansion Menokin, built by Declaration of Independence signer Francis Lightfoot Lee c. 1769. Machado and Silvetti Associates designed the “Menokin Glass House,” a new structure that will “ghost” back missing walls in glass, and include interior access. The Menokin House Foundation elected to teach the house’s sinew, which shows construction techniques and honestly attests to the passage of time. 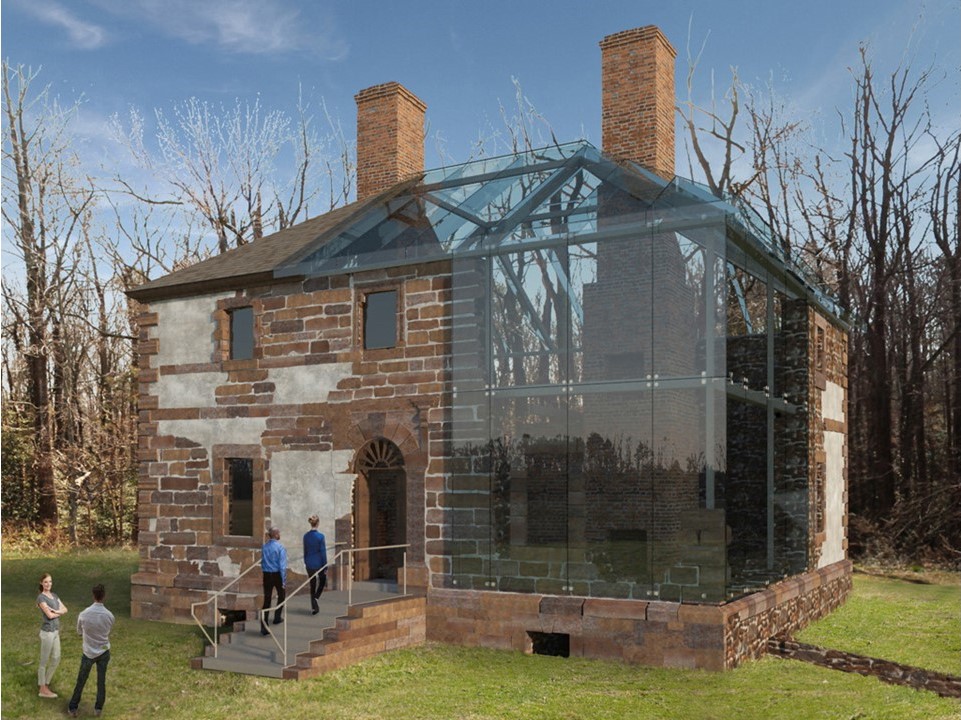 The Clemens House need not be subject to an expensive Menokin-like treatment. There’s a far more economical local model, with a similar story. Down on Chippewa Street in Gravois Park, there’s a boarded-up house sitting on a lawn. The parapet battlements look more like spaces between lost windows, which is what they are. This fragment is the surviving part of a two-story house that caught fire in June 2016. Jason Deem, the owner, scuttled a planned rehabilitation and instead hosted a public funeral. The funeral – the supposed acknowledgement of ruination – seemed to be a morphological moment instead of a burial. Mourners and the owner began imagining new ways to “develop” the house, and Deem called off demolition. After removal of the dangerous parts, there’s a house still on the site that has one hell of a tale to tell. Full Disclosure: Jason Deem has an ownership interest in NextSTL. 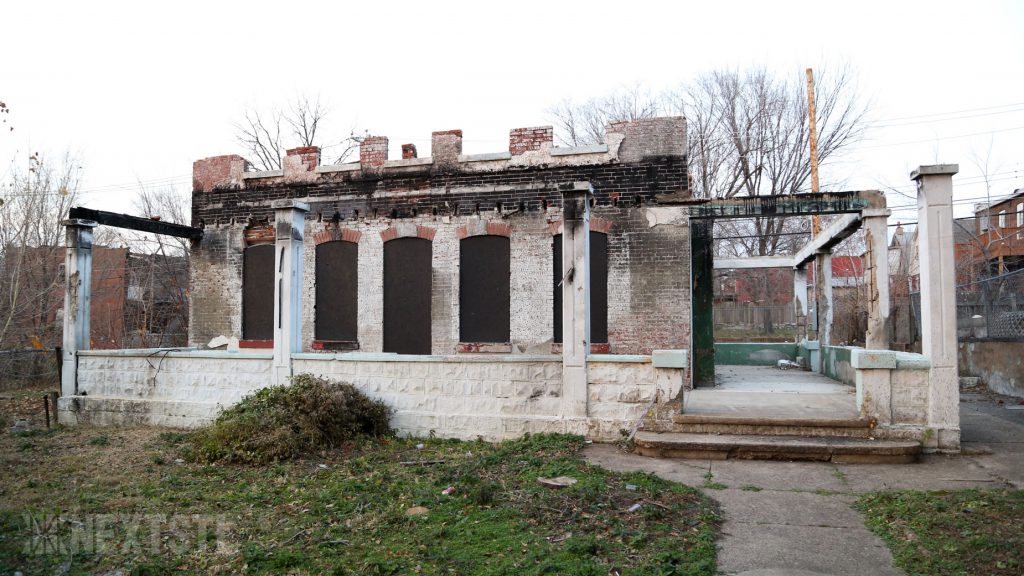 Deem’s little house is not even a designated City Landmark like the Clemens House, nor does it have the encyclopedic historical associations. But its immolation shook open new possible forms and futures. Can the Clemens House see a similar resurrection? While preservation now seems practically unlikely given owner will and the ongoing sanitization of Cass Avenue, the prospect opens outcomes better than a vacant lot. The plantation ruins, Menokin, St. Liborious – these are sources of visitation, curiosity, storytelling and new cultural mythology – like the Clemens House has been even in its abandonment.