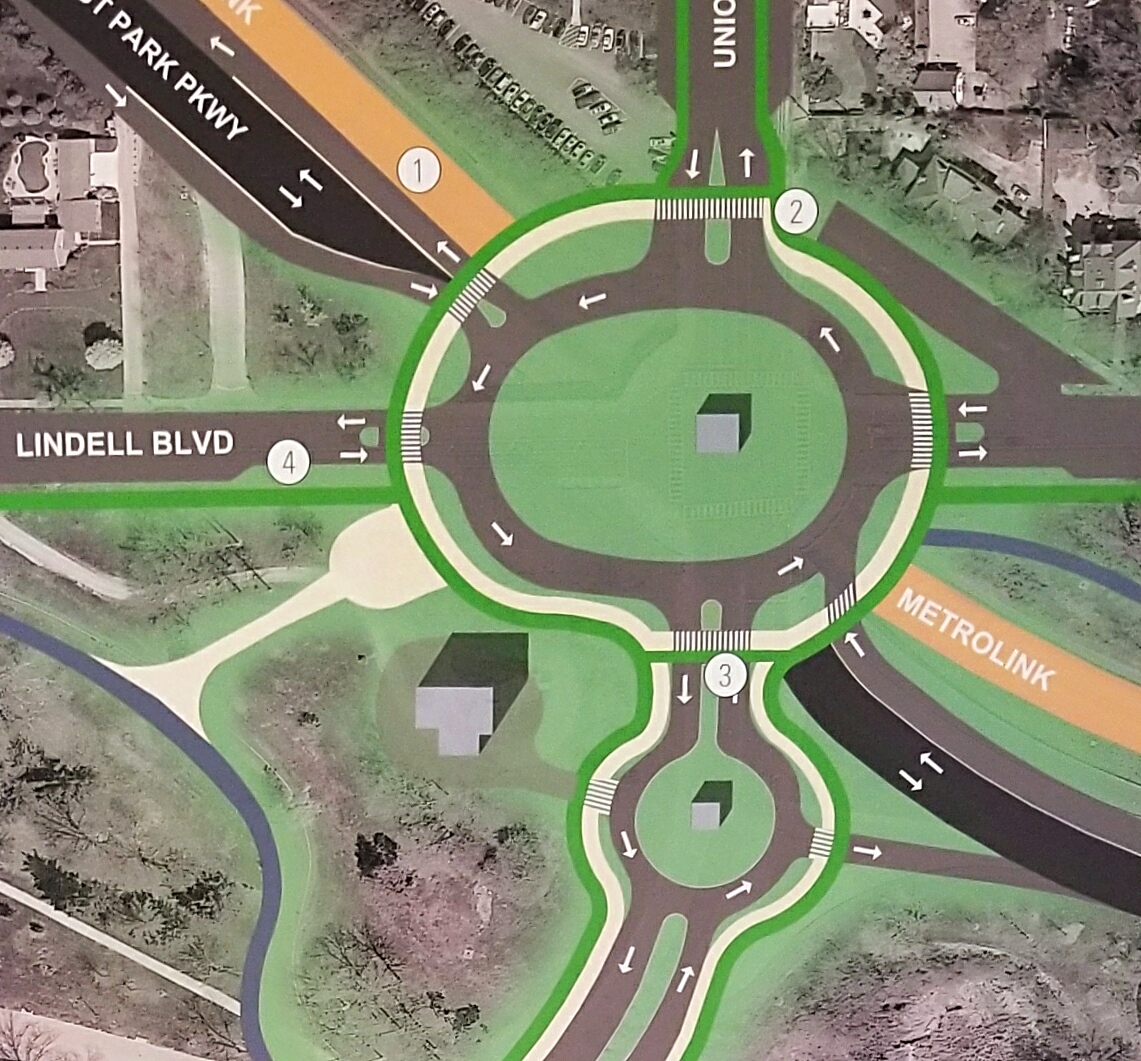 For the past twenty years, Lindell Blvd has been my own private freeway. I work on one edge of the park and live on another. Often I feel like mine is the only car on that super-wide expanse of asphalt along the northern edge of Forest Park. That stretch of Lindell easily could function as a fourth runway for Lambert Field — if it didn’t already have a spare. For you newcomers, that’s St. Louis Lambert International Airport.

As a matter of confession, my Mini Cooper desperately wants to drive that stretch of city street at about 60 miles per hour — just like the larger cars with bigger engines that fly past mine. Add cyclists and pedestrians, and it’s like a video game. Lindell is designed to handle 30,000 cars per day, but it averages just 8,000 cars. Signs along Lindell state 35 MPH, sometimes with a second sign below that one that seems to promote intolerance. Sometimes they say 25 MPH and ban trucks. I assume that’s the No Tolerance part — truckers. It’s a very chic street. But even in a car, it takes incredible restraint to drive that street slowly. Typically, I take the parkway just to avoid the temptation. On those days, Lindell averages 7,998 cars. 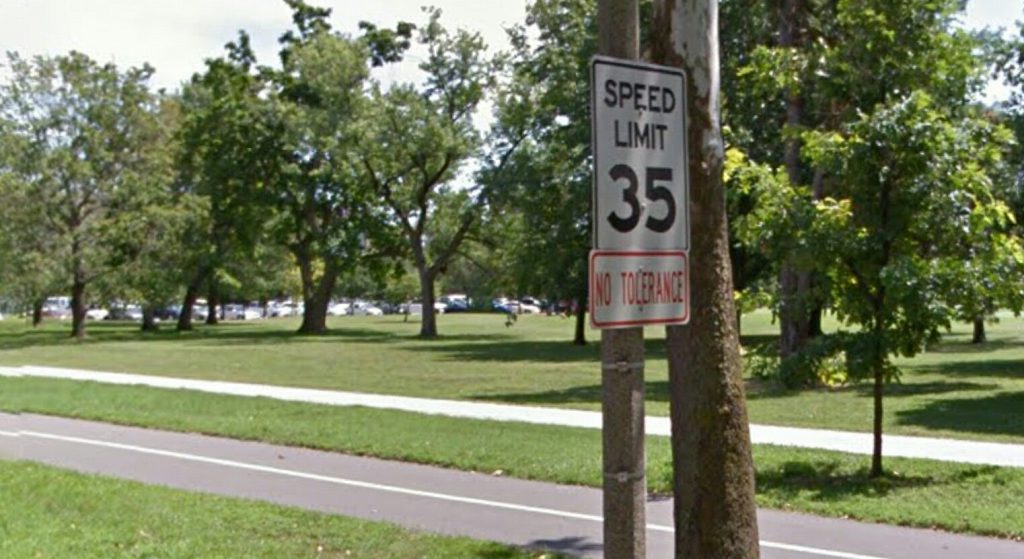 All of that could change based on initial concepts proposed at Forest Park Forever’s open house Thursday at the Forest Park Visitor Center. This meeting is just one of many meetings in a lengthy Forest Park Great Streets Study process. There were a lot of fantastic ideas on display Thursday, from protected bike lanes on the Tamm overpass to year round event space and programming at the Steinberg Rink. But the best ideas involved humanizing Lindell Blvd. 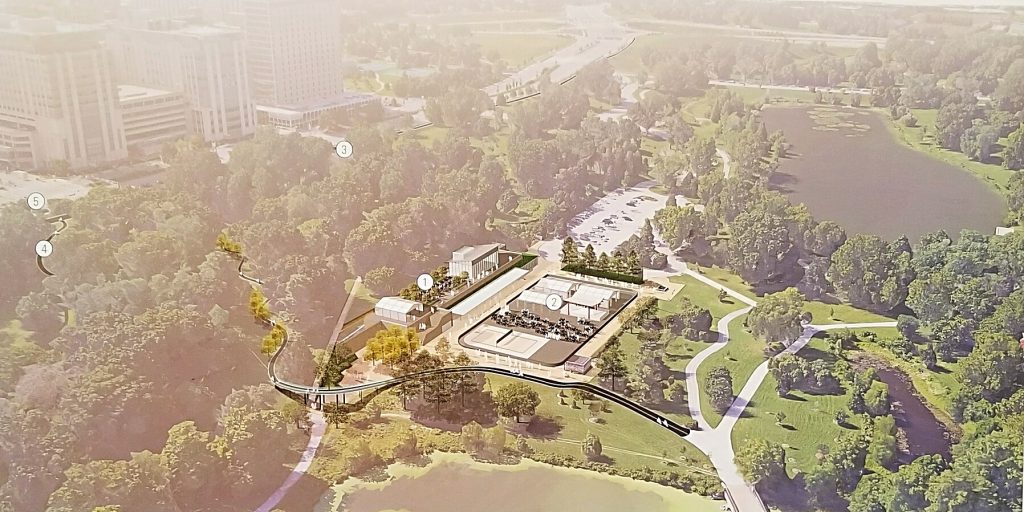 One proposal is to reduce Lindell to two traffic lanes from four to allow for a protected bike lane along the street’s northern edge. Planners heard from commuting cyclists who try to navigate the bike lane inside the park when it is shared with strollers, runners and rollerbladers. A protected path would be separated from traffic by low profile planters or other physical barrier and not the white vertical pipes seen nearby on Union Blvd. With a low profile, a bike lane will do nothing to detract from the grandeur of the boulevard. Indeed, fewer lanes of cars can only improve the look of the street.

Other proposals include pedestrian bumpouts at crosswalks to slow traffic and reduce the distance pedestrians must cross. Pedestrian islands would further slow traffic at major intersections and make for safer crossings.

Another concept involves placement of a roundabout — really more of a traffic circle — at the intersection of Lindell and Union. The current bridge beneath that intersection, which covers Forest Park Parkway and the Metrolink tracks, is in an advanced state of disrepair. The study suggests replacing that cover with a larger one so as to allow for the roundabout. A roundabout will reduce backups and time idling at traffic lights, reduce injuries from collision by an average of 76% and improve pedestrian and bicycle access. The result will greatly enhance park access from the north. The design would include high visibility crosswalks and will allow vehicle access to and from the parkway in all four directions. Current access is only to and from the east. 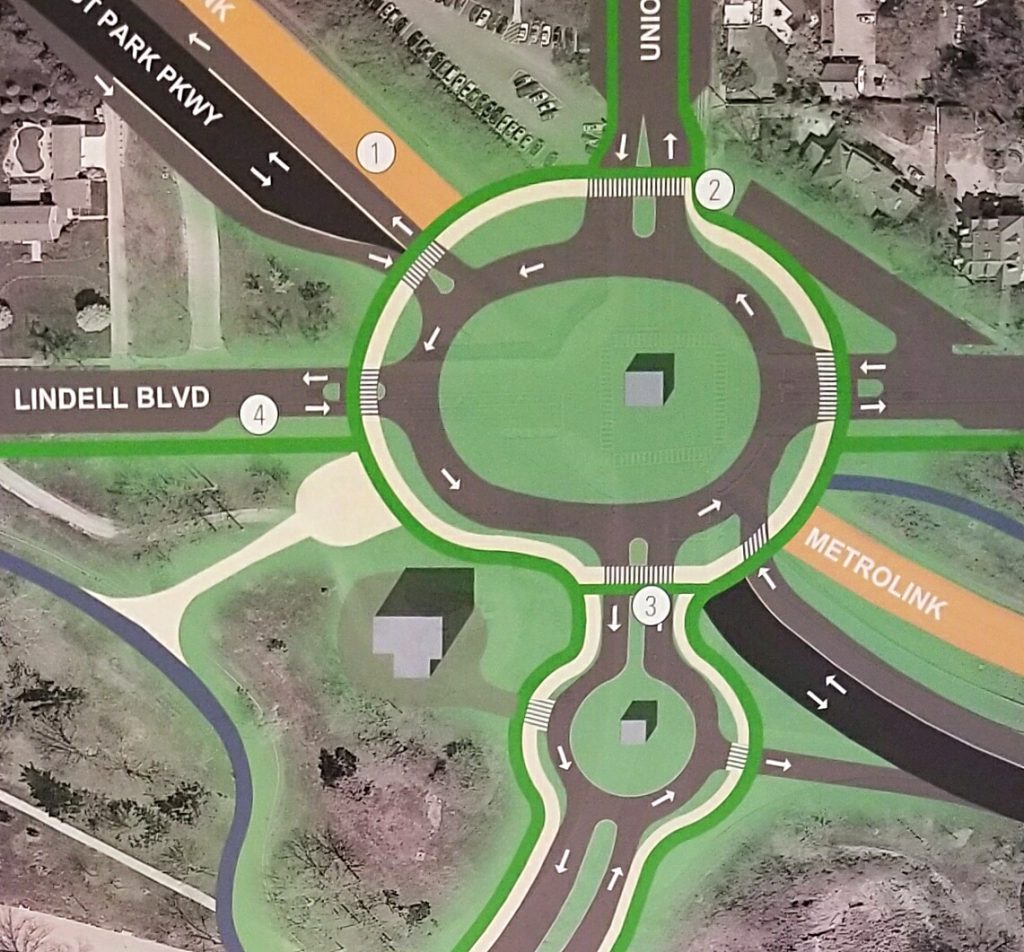 Though just a concept at this stage, the large roundabout would revolve as an oval around a park-like center. Think traffic cicles in Washington, DC or Paris, not the dinky (though functional) roundabouts that often pop up in the St. Louis region. While not in the concept, the concrete balustrades around the intersection could be replicated if desired. The current concept instead replicates a move made famous by Baron Haussman in his nineteenth century design for the boulevards of Paris. The concept suggests placement of a large sculpture or other installation at the center of the oval, a placement on axis with both Lindell and Union. The schematic follows Beaux Arts principles seen in park-like traffic circles elsewhere. (The Angel de la Independencia in Mexico City is a very fine historic example.) Both Union and Lindell Boulevards would therefore frame the element, whether it be a classical monument, fountain or large scale modern art. (I’m cool with anything not made of large slabs of corten steel. I have nothing against such slabs. I just think St. Louis already has its fair share.)

To the south, another roundabout would provide for a grand entrance into Forest Park.

According to Forest Park Forever, a goal of the study was to “improve how pedestrians and cyclists can safely enter and exit the Park across … major perimeter streets.” While the study is not yet finalized and they are seeking perspective from residents and other stakeholders, the study so far shows how a humanized, more sustainable Lindell Blvd might look. It shows a northern edge to Forest Park where pedestrians, cyclists and drivers all enjoy traveling through a place of safety and beauty. I know my Cooper will be eager to cooperate with a street that’s actually designed for 35 MPH.