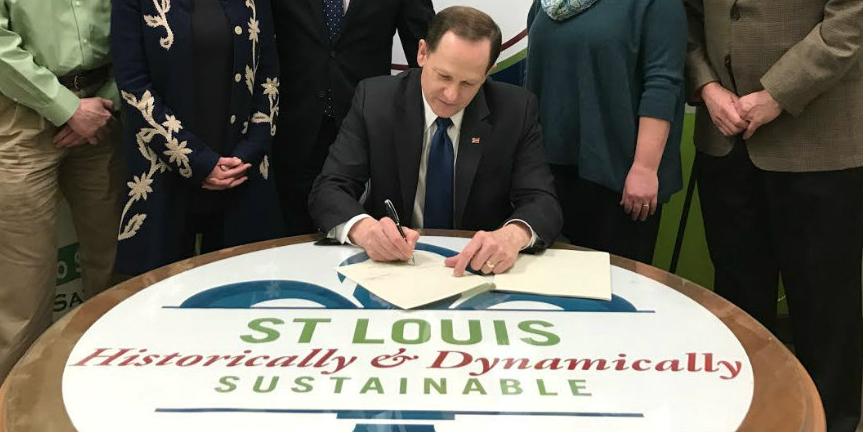 City of St. Louis Mayor Francis Slay has shocked the political world again. After his surprise announcement this past April that he would not seek a fifth mayoral term, Slay has decided to run as a write-in candidate on the April 4 ballot.

The mayoral contest appeared to be all but settled after 28th Ward Alderwoman Lyda Krewson narrowly edged out city Treasurer Tishaura Jones in this past month’s Democratic Mayoral Primary. With general election turnout traditionally low, and Slay seemingly as popular as ever, the effort is thought to have some chance of success.

Just as the April announcement seemed to catch everyone off guard, this latest twist appears to have been unknown to even longtime staff. Patrick Brown, former Deputy Chief of Staff and legislative director to the mayor, and now Chief Resilience Officer for the City of St. Louis told NEXT STL, “Unreal. But what’s more resilient than a mayor running for a fifth term? Nothing. It’s unprecedented resilience.”

Communication Director for mayor Slay, Maggie Crane, responded to a request for comment with a link to a Tweet about cows running loose in North St. Louis. It was unclear if the response was a sign a fifth Slay term would focus on additional police funding.

In an apparent reference to the quickly spreading news of a possible fifth Slay term, Alderman Jack Coatar, whose 7th Ward covers Soulard and the city’s Central Business District, posted to Facebook, “A fifth term would mean more of the same for downtown and the city.” NEXT STL was unable to confirm if the post was meant as an endorsement.

In a statement to staff obtained by NEXT STL, Slay explained that he has much left to accomplish. “Our sustainability plan is 260 pages, there’s so much more than butterflies in there that we should probably do,” Slay wrote. “There are eight different categories of Objectives and Strategies and 27 different focus areas on which to bring a singular focus.”

The mayor has earned plaudits for his high-profile efforts to provide safe-haven for the migrating Monarch butterfly, a point recognized by to-this-point presumed mayoral frontrunner Krewson. “I always thought that if the mayor could accomplish for the children of the city what he accomplished with butterflies, we’d be on to something,” Krewson stated.

Slay’s stunning decision also appears to have been motivated by the possible expansion of Major League Soccer in the city. Slay is an avid fan of the sport, starring at Quincy College as a member of the three-time NAIA Champion Hawks. In 2014 Slay was inducted into the St. Louis Soccer Hall of Fame.

With apparent confidence that both Prop 1 and Prop 2 will be approved this week by city voters, providing an estimated $60M in public funds for a new soccer-specific stadium, Slay wants to be in Room 200, playing an official role at the opening match in 2020.

“Being on the pitch for the first Major League Soccer match would be incredible. It’s where I belong,” Slay told NEXT STL. “I was a star at St. Ambrose, kind of a big deal, while Krewson never made it off the bench on a Moberly High team that couldn’t make it out of Districts. I belong on that pitch. You need me on that pitch.”

Asked what other factors led to his dramatic change of heart, the mayor cited additional unfinished business. “The homicide rate rose 173% from my second year in office to this past year, the city’s credit rating has declined, and we’ve lost more than 30,000 residents. It would be nice to do something about those too.”