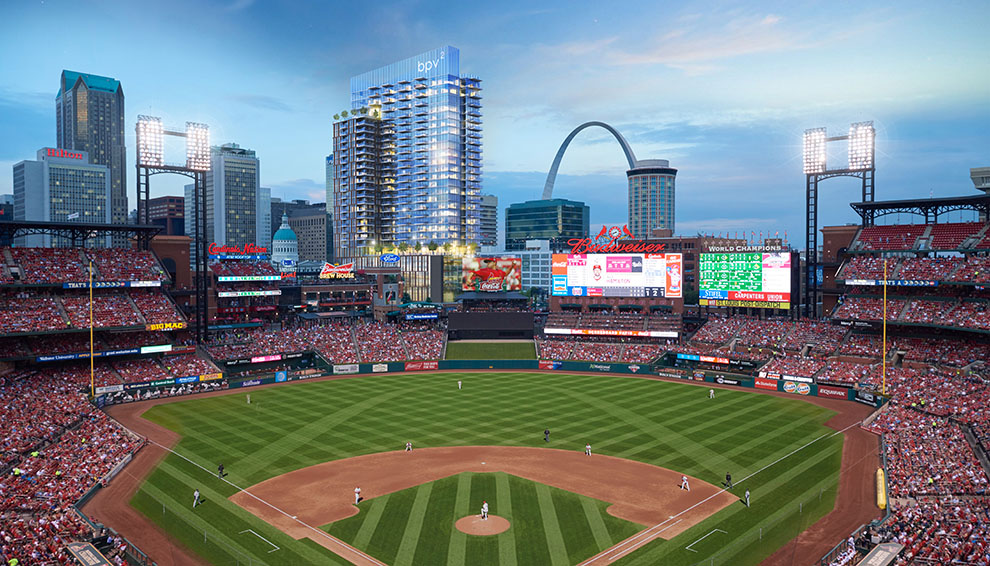 This morning the St. Louis Cardinals finally announced Phase II of their Ballpark Village development. While years behind schedule, if built as presented, the project would fulfill much of the original promise of the project.

Ballpark Village phase II is set to total 550K sf, including a 29-story residential tower rising 320ft., a 10-story Class-A office building, retail, restaurants, and entertainment space. The residential tower will be located at the east end of the development at Clark and Broadway, with a view into Busch Stadium. The office tower would be built at Clark and 8th Street. Together, they would complete the streetscape along Clark Avenue.

A bill being filed today by 7th Ward Alderman Jack Coatar offers an unspecified amendment to the existing development agreement with the city. Language from the Cardinals announcement appears to indicate Tax Increment Financing (TIF) will be sought, as well as an additional 1% Transportation Development District Development (TDD) tax. 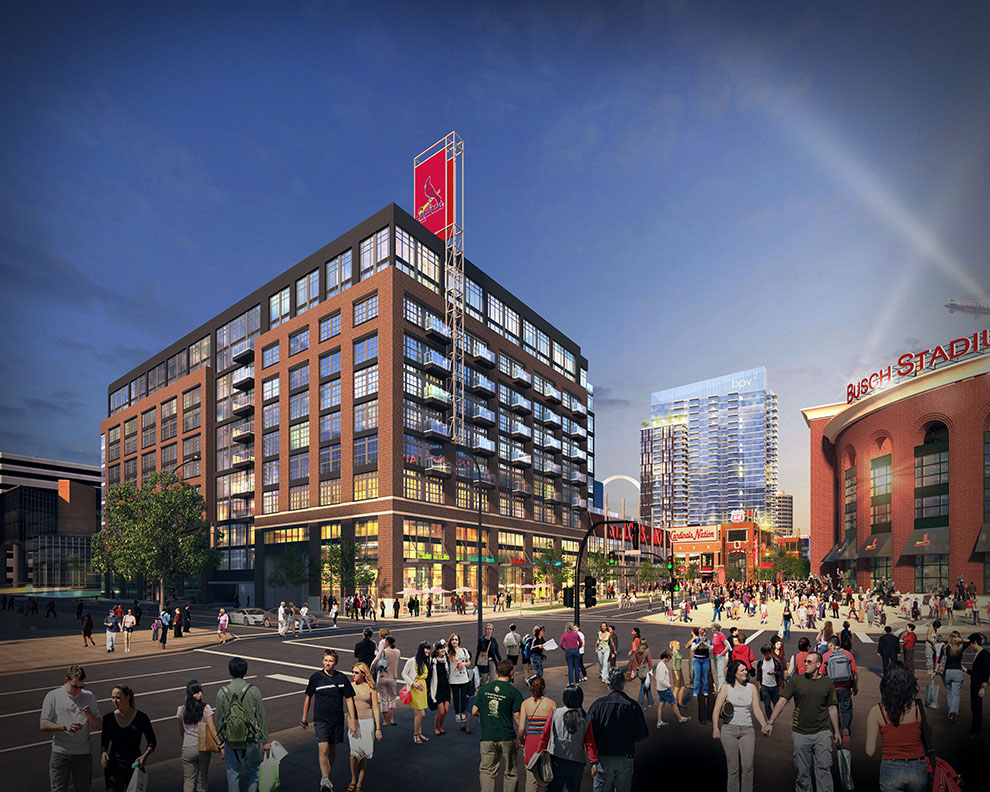 The $100M first phase of Ballpark Village was completed in 2014. While celebrated by the Cardinals, the first development completed was vastly underwhelming. The promises made to the city more than a decade ago were unfulfilled. Downtown got what is in essence a new bar district. Although charges that Ballpark Village led to the closure of other establishments may be exaggerated, nothing new had been added.

The new site plan released for Phase II appears to resurrect something of a street grid within the development site. Continuing south into the area is 7th Street, and east-west access appears to be something more than a garage access driveway. The north end of the site is planned for an additional phase.

The development schedule for Phase II anticipates construction beginning late next year, with the project completed in 2019. 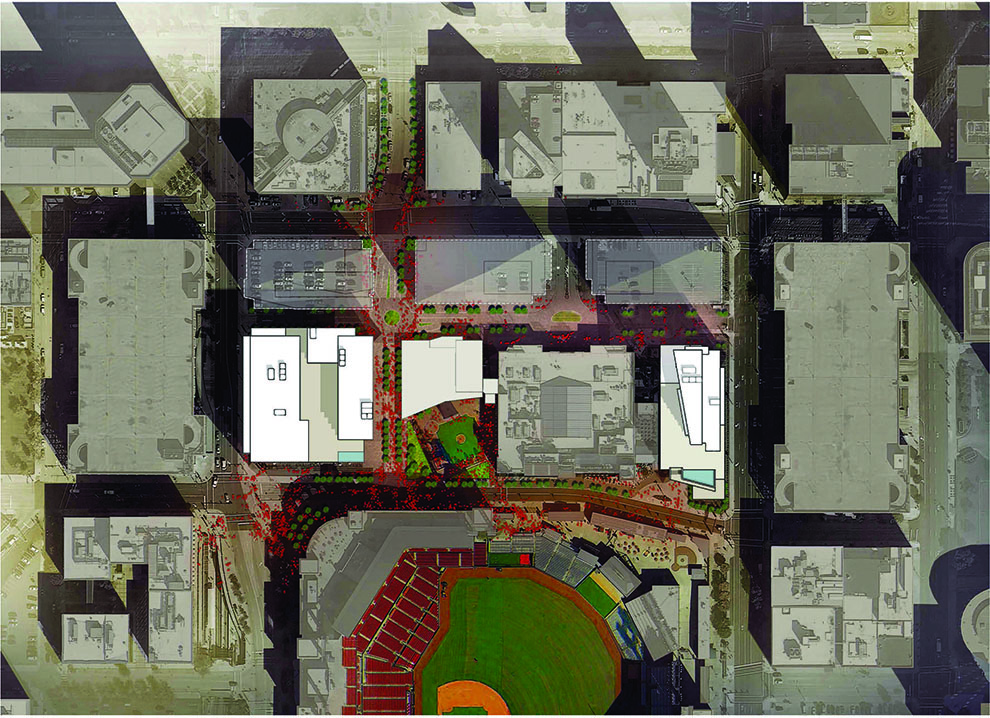 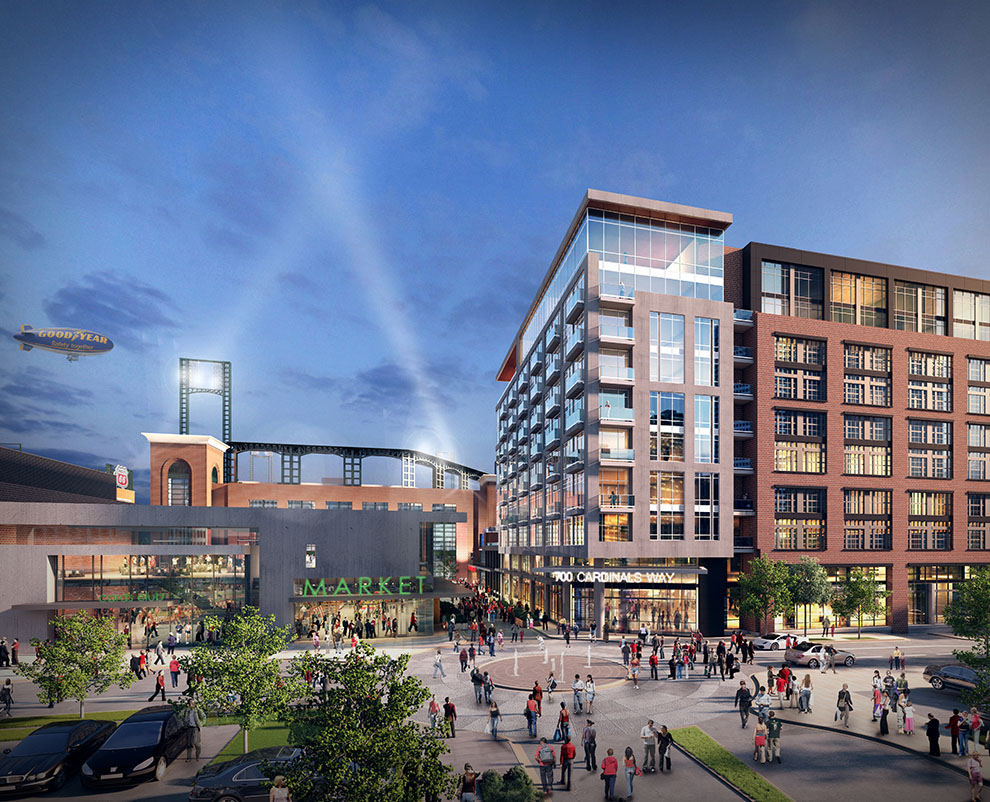 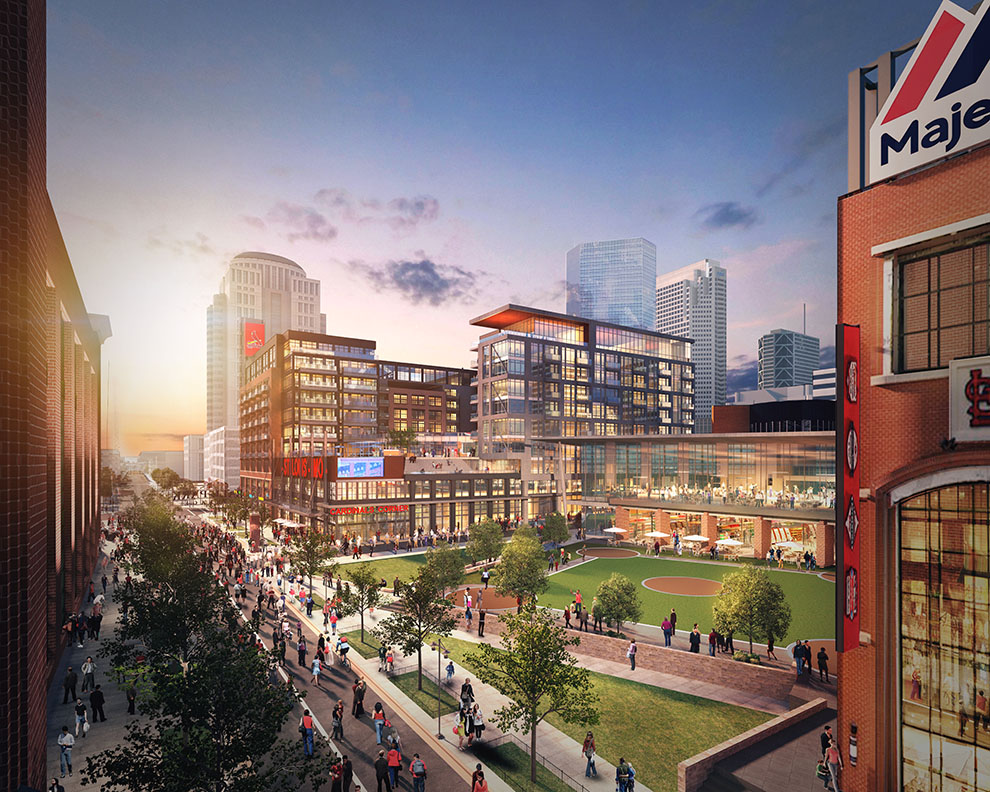 As was done with the celebration of 10 years of the new Busch Stadium (see: Cardinals Celebrate Ten Years of Busch Stadium III With a Whopper of a Propaganda Video), the boosterism regarding economic development and community impact is a bit over the top. A lot is being promised, and a lot is being claimed on behalf of the stadium and Ballpark Village Phase I. The Cardinals released two videos announcing and detailing the next phase of development. The videos were recorded at the same time as the Busch Stadium promo.

While even without knowing the details, there’s little reason to believe the city won’t agree to amend the development agreement and provide TIF, TDD, and perhaps other support, we have also been here before. Prior announcements for development at Ballpark Village appeared air tight. The initial plan was ready to go, we were told. When Centene signed on for a new office tower, it was supposedly a clear sign dirt would turn soon. The belief that development will happen now is a combination of what appears to be a more modest development plan, and the assumption that something would eventually be built.

The St. Louis Cardinals announced plans for a $220 million, 550,000 square foot second phase of Ballpark Village which will include the construction of a 29-story luxury high-rise residential tower, the first new Class-A office building built in downtown St. Louis in nearly thirty years, and additional retail, restaurant and entertainment space.

“We are very excited about the second phase of Ballpark Village,” said Bill DeWitt III, President of the St. Louis Cardinals. “Our vision of a mixed-use neighborhood where people live, work and play will become a reality. This is a real game-changer for the city of St. Louis and the state of Missouri.”

The second phase of Ballpark Village will complete a full build-out of Clark Street with a 29-story glass and steel residential apartment tower on the east end, and a large Class-A office building on the west end, as well as additional retail and entertainment in between, transforming Clark Street into one of the most unique city streets in all of major league sports.

The residential apartment tower will be a modern, 29-story, 230 foot tall, luxury high-rise apartment building at the corner of Clark and Broadway that will offer views of the Gateway Arch, the Mississippi River, the St. Louis skyline, and unobstructed views directly into Busch Stadium.

The Class A office building at the corner of Clark and 8th Street will sit right across from the bronze statues on the NW corner of Busch Stadium, and will also include structured parking below, and street level retail and restaurants. It will be the first “new construction” office building built in downtown St. Louis in more than a generation (Metropolitan Square opened in 1989).

Also in Phase II will be a signature two-story retail marketplace and entertainment venue overlooking the existing Busch II Field, the signature “open space” of Ballpark Village. The marketplace will include diverse food options and other amenities to support the new office and residential tenants in the project.

The bill being filed today seeks approval from the city of St. Louis to amend the existing development agreement that enabled the first phase of Ballpark Village. With approval of a short amendment, the development team will have the green light to initiate a second phase that is substantially more ambitious than the highly successful 100,000 square foot, $100 million first-phase that opened in the spring of 2014.

In addition to generating revenue to support the expansion of Ballpark Village, the second phase is expected to generate millions in additional tax revenue for the city of St. Louis, the St. Louis Public School District, and the state of Missouri.

“The Cardinals have built a world-class franchise, a stellar team, and an incredible fan experience, bolstered by Ballpark Village. Phase II marks another strong investment by the Cardinals and demonstrates their commitment to the City of St. Louis,” said Francis G. Slay, the Mayor of St. Louis. “The growing footprint of this top-notch, regional entertainment destination will put more people to work and give more people another place to play Downtown. I am excited to see the Cardinals add another quality project to the building boom that’s happening throughout our City.”