Forest Park is without a doubt, the recreational and cultural anchor of St. Louis. There are few places across the country that compare. After a period of extended decline, the park has rarely looked better. Through the establishment of the 1995 Forest Park master plan, and massive civic investment, sidewalks, paths and waterways have been replaced and restored, institutions have expanded, and amenities added. Still, refinement and redevelopment is far from complete for the 140 year old park.

Today, Forest Park Forever holds an open house (4-7pm at the visitor’s center) to share what has been learned from its effort to gather public input regarding connectivity and mobility in and across the park’s 1,300 acres. While investments in restoring and developing the park have largely been focused on internal attractions and amenities, attention is being turned toward access and transportation equity for all users. 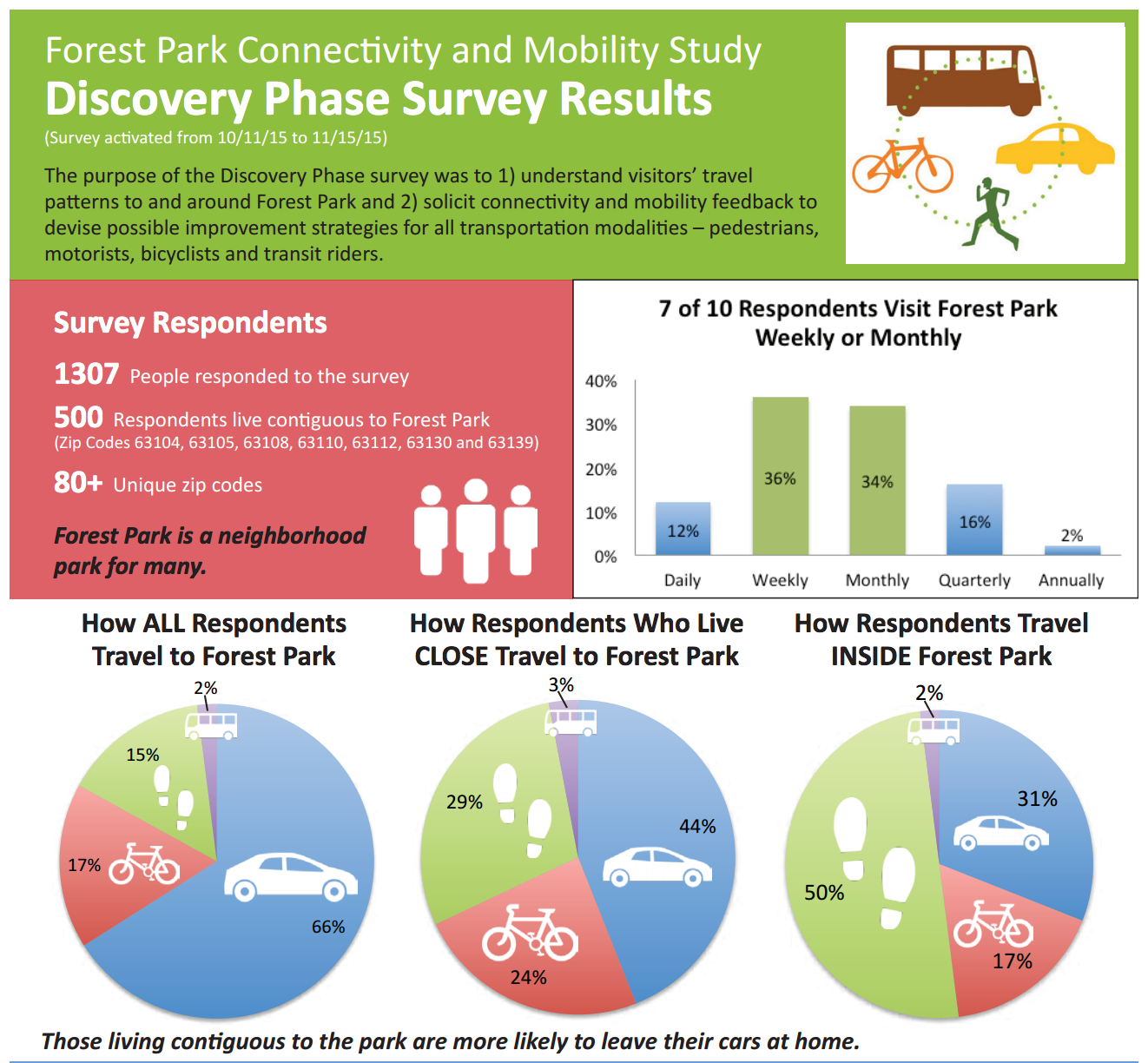 Forest Park Forever and the City of St. Louis gathered input from more than 1,300 individuals via an online survey and an open house and workshop to produce the study. In the words of Forest Park Forever, the result of this effort does not “in any way alter, amend, become part of or act as a substitute for the Forest Park Master Plan”, but it does provide public guidance for prioritizing future projects.

The full Forest Park Connectivity and Mobility Study can be accessed here, and is embedded below. The study is an extensive and in-depth account of options and possibilities moving forward, establishing the basis and authority for future improvements identified as priorities by park users. Many are likely to become reality, while others will never be completed. 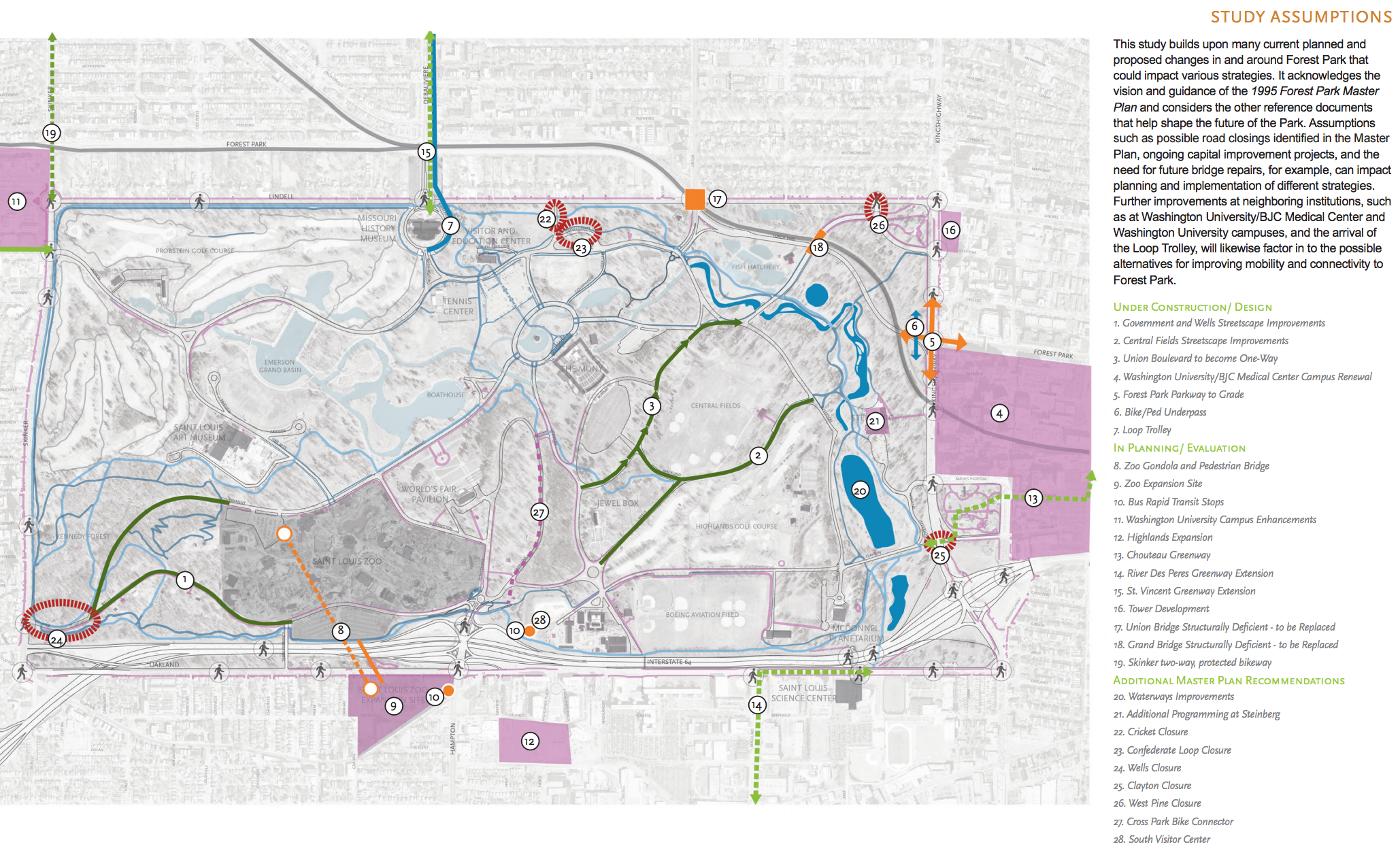 The study deserves a full reading, but at least be sure to read the Short-term, Intermediate, and Long-term strategies summarized in the study and posted below. Many ideas are important basic improvements to crosswalks, bicycle access, and conflict points, but a few items stood out as particularly interesting.

The study includes a vision for a “climate controlled underpass” to serve park visitors utilizing the Central West End Metro station, or accessing Forest Park from the medical center. While noted to require further exploration, the tunnel would remove the conflict point of crossing Kingshighway, as well as potentially provide “security and space for kiosks and tables”.

A two-way protected bikeway on Lindell could be part of the plan. Identified by park users as a priority, the bikeway would be protected from traffic by a curb or parking and extend the length of the park, utilizing West Pine at the east end to access the Central West End neighborhood. The limited conflict points along Lindell make it a good prospect for this type of transportation infrastructure (Now how about the same on the east side of Skinker?). 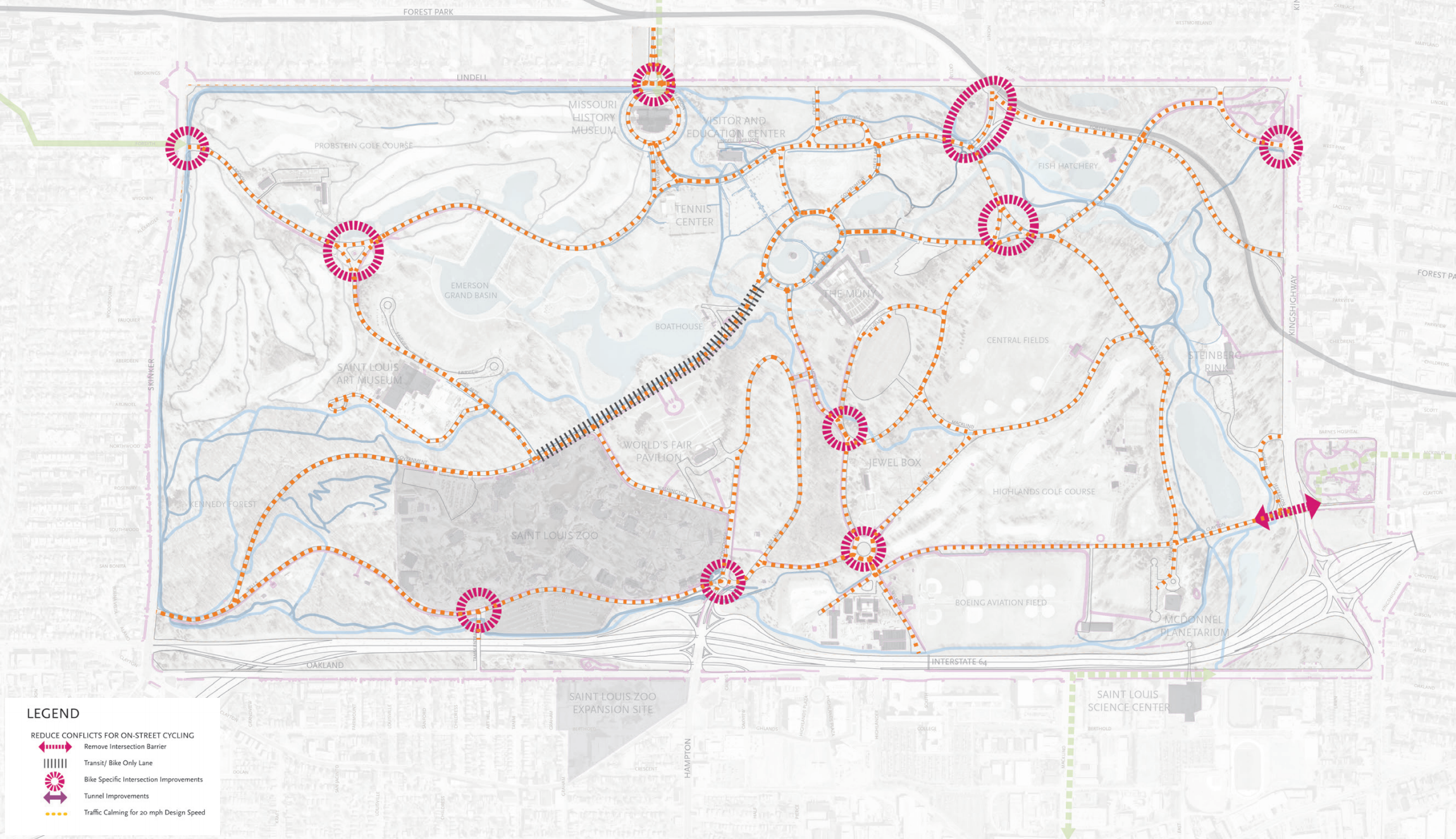 The study also includes the idea of returning Forest Park Parkway within the park to a true parkway. The route would be landscaped and could incorporate bike lanes, sidewalks, and access to the park. Perhaps the biggest idea for that corridor would be to introduce a new MetroLink station at Grand Drive within the park. In theory, the station could serve as the most direct access point to Forest Park, though it would be far from attractions and it’s unclear how the expensive project would attract ridership.

Reducing the number of traffic lanes on Lindell could also be explored. The raising of Forest Park Parkway to Kingshighway, creating an at-grade intersection, will change traffic patterns in the area, as will potential changes at Union and Lindell, and the potential closure of some park roads.

A 2008 traffic study looked at the park’s nine points of vehicular access and found that fully 60% of park visitors arriving by car accessed Forest Park via Hampton Avenue. This was prior to the rebuild of Interstate 64 (Highway 40), which has brought more traffic to the park via the Interstate and Hampton.

Congestion at Hampton could point to the need to enhance underutilized access points, yet the study considers closing include West Pine at Lindell, the Clayton Avenue underpass at Kingshighway (which would maintain pedestrian and cycling access), Cricket Drive at Lindell, and Wells Drive at Skinker. The closures, however, would be considered only as a component of a complete overall of internal park transit, and establishment of remote parking options. 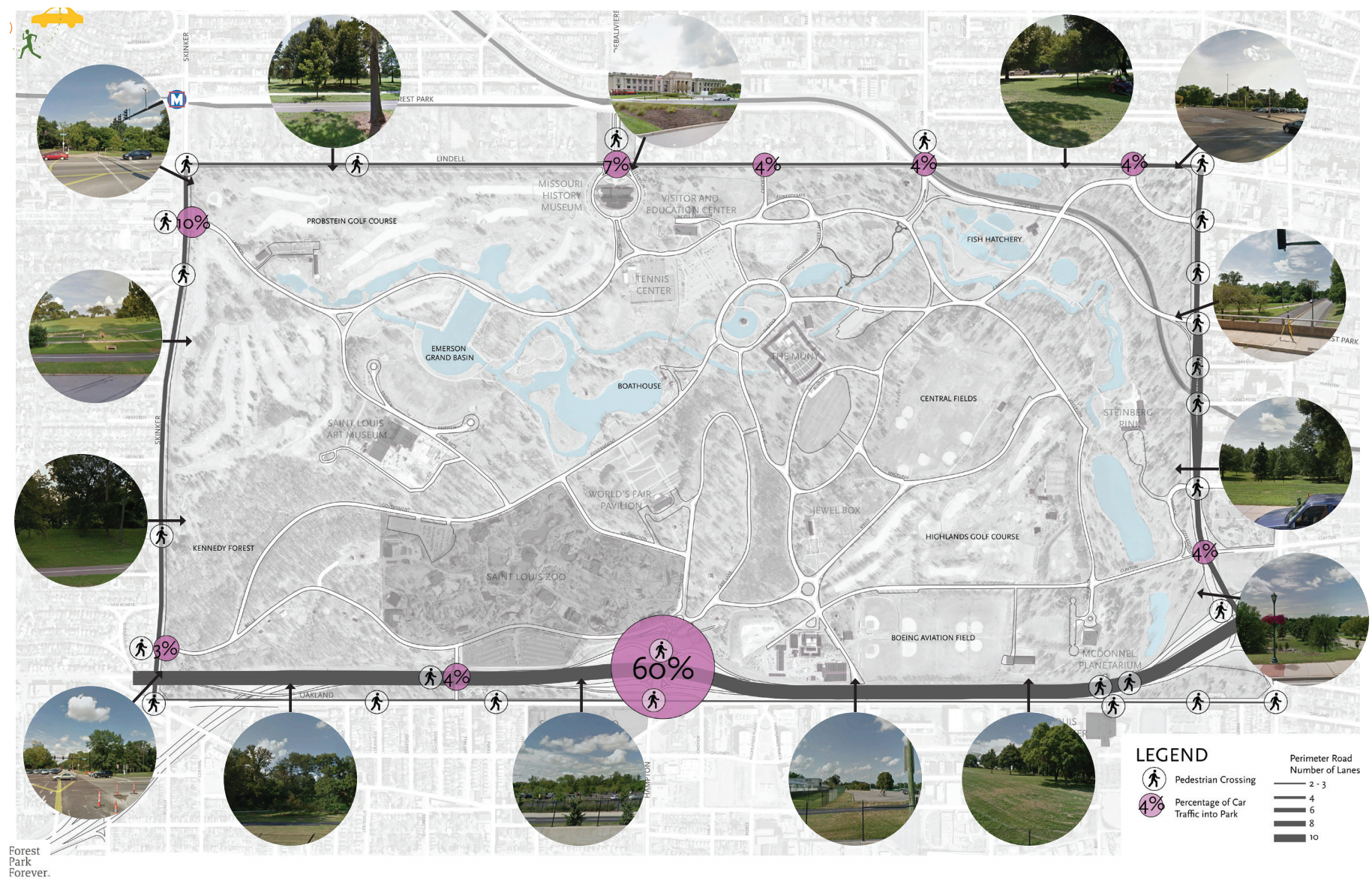 The study also includes the idea of a pilot closure of the entire park to vehicles on select dates. Lagoon Drive between Fine Arts and Grand Drive could be permanently closed to vehicles, allowing access for only park transit and cyclists. Again, what makes these suggestions feasible at all is a plan to emphasize remote parking and transit access, and providing a much more robust internal park transportation system.

Remote parking, in particular for special events in the park, could be coordinated with Washington University, where a massive underground garage is planned, St. Louis Community College, and BJC. Also, the St. Louis Zoo’s strategic plan calls for south zoo parking to be moved across I-64. Smart parking technology such as realtime availability could provide visitors with guidance on parking options. 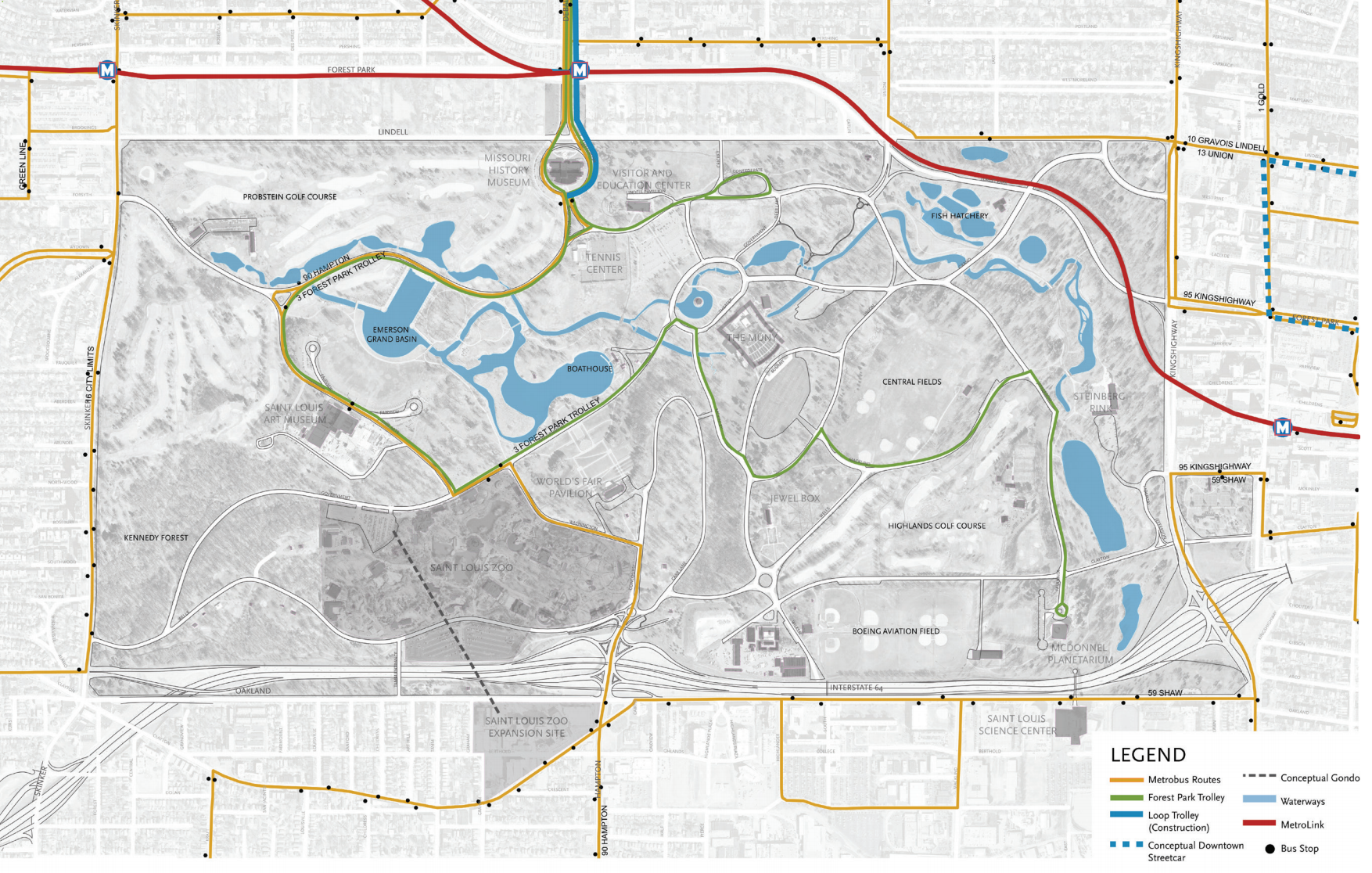 {existing transportation in and around Forest Park} 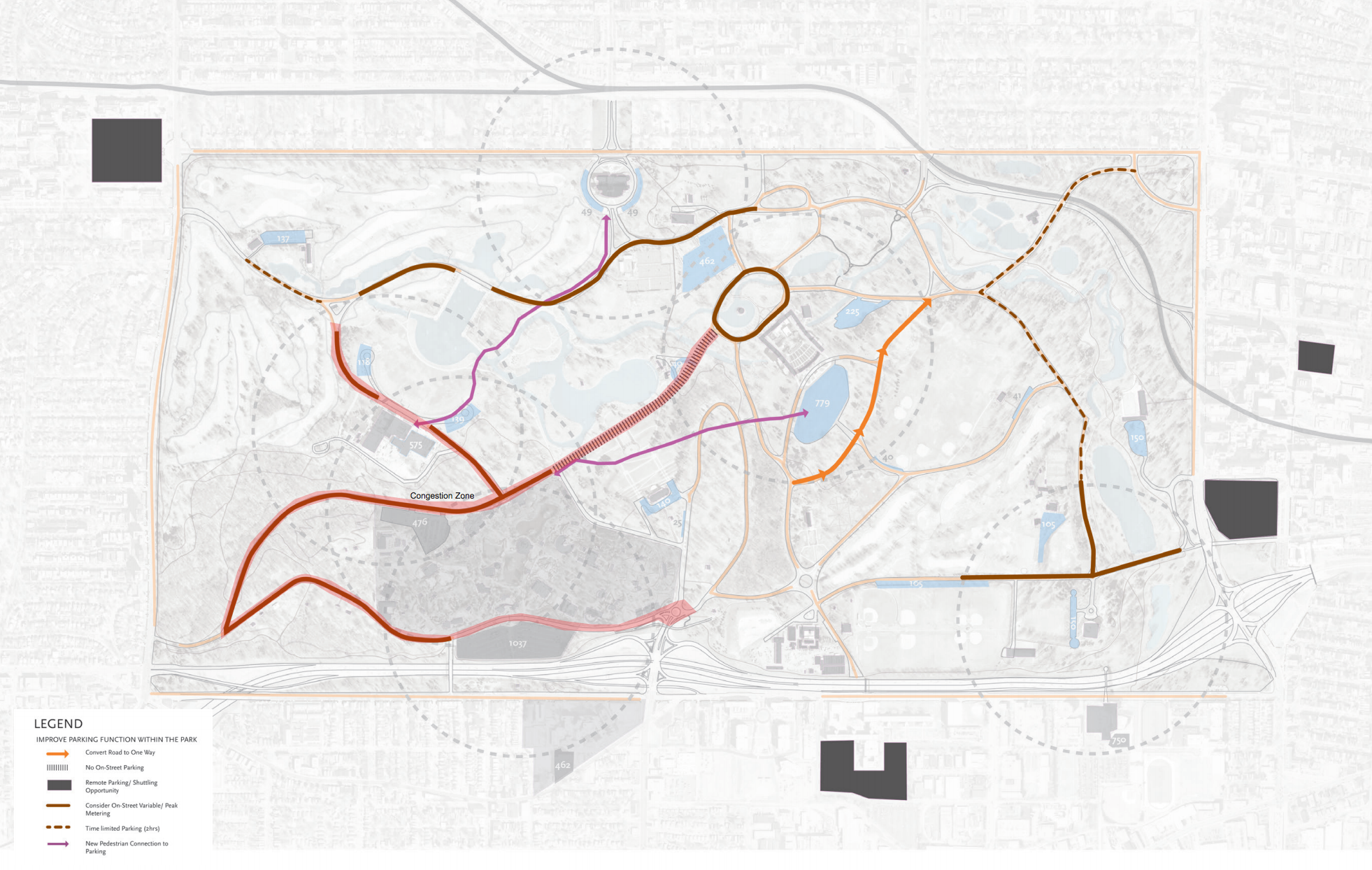 For internal transportation, the current trolley (a bus) could be rebranded and revamped with more stops, greater frequency, and shelters with real time arrival information at covered stations. Ultimately, fixed route transit could be introduced. The study identifies both a north-south, and east-west route through the park. Initially, theses routes would be preserved for future development. While the study notes everything from people movers/trams, light rail, monorail, gondola, streetcar, trolley, bus rapid transit, zoo train, and automated buses, have been suggested, perhaps it’s easiest to imagine an extension of the Loop Trolley serving the park. 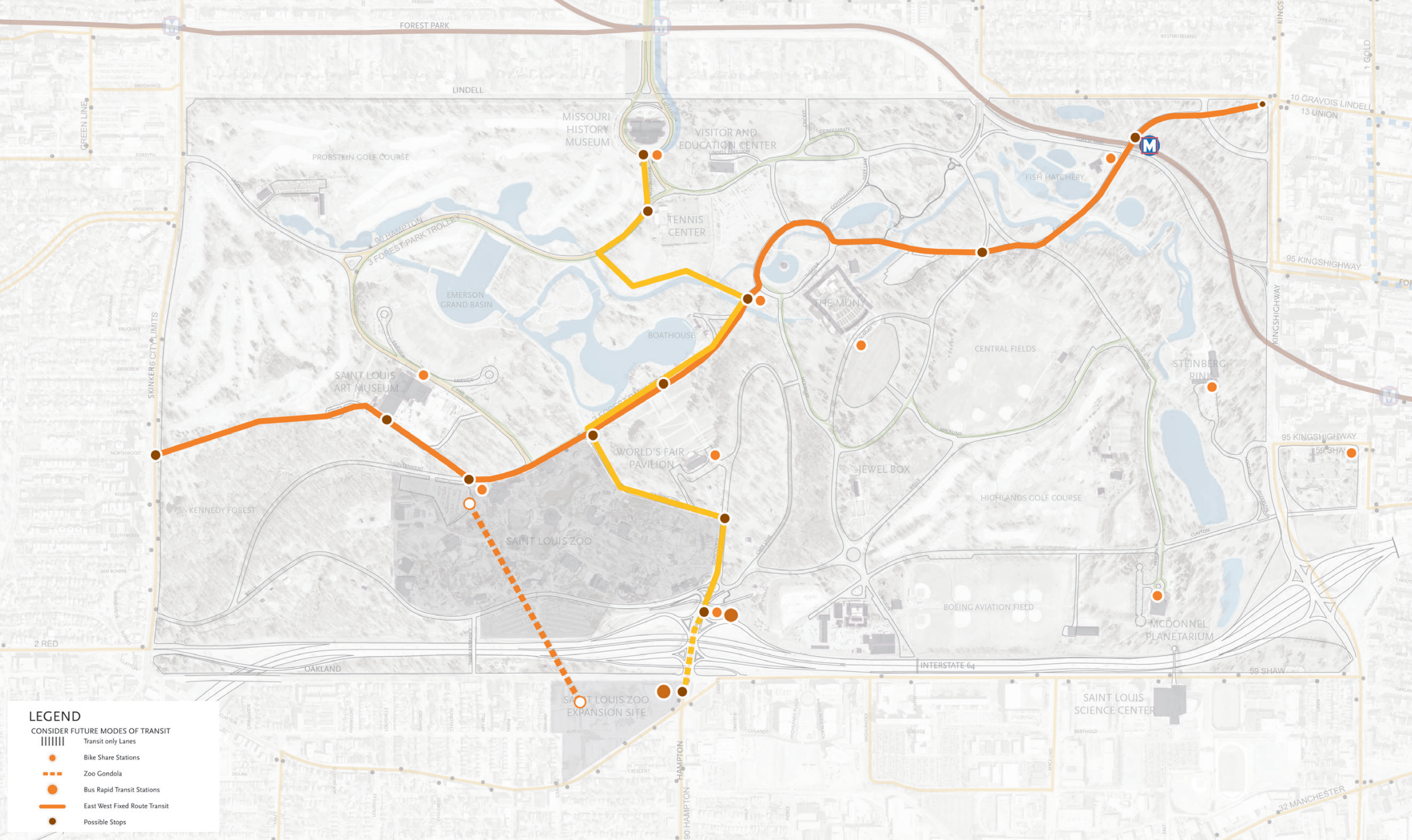 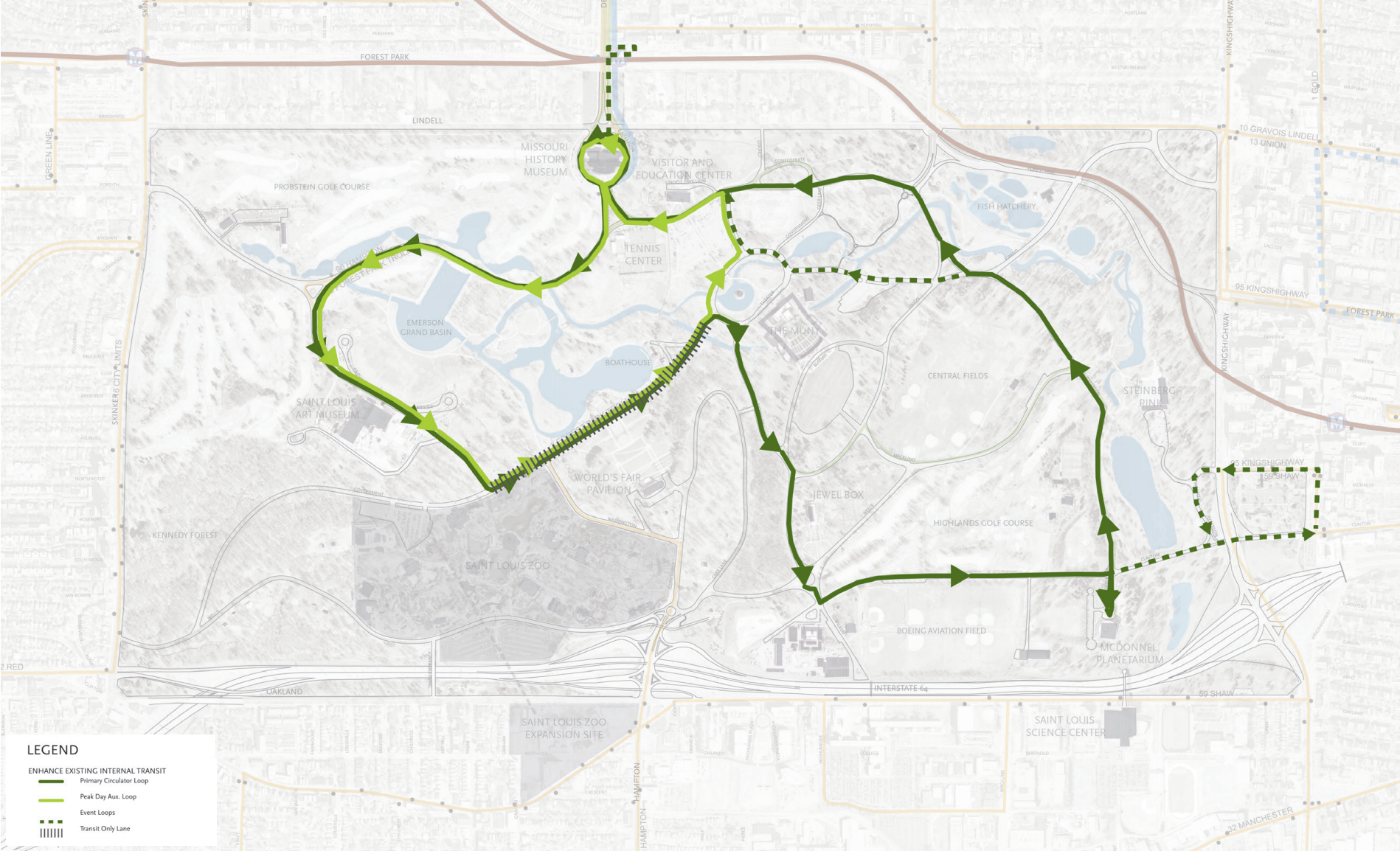 The core of the study places a significant focus on the need to improve pedestrian and cycling connections at nearly every access point along the park’s perimeter. The extensive list includes more pedestrian connections across Skinker Boulevard, traffic calming and better crossings at Kingshighway, as well as better amenities at Des Peres, Debaliviere, Union, and elsewhere. Conflict points within the park are also addressed, with an underpass at Tamm Avenue a possibility for example. 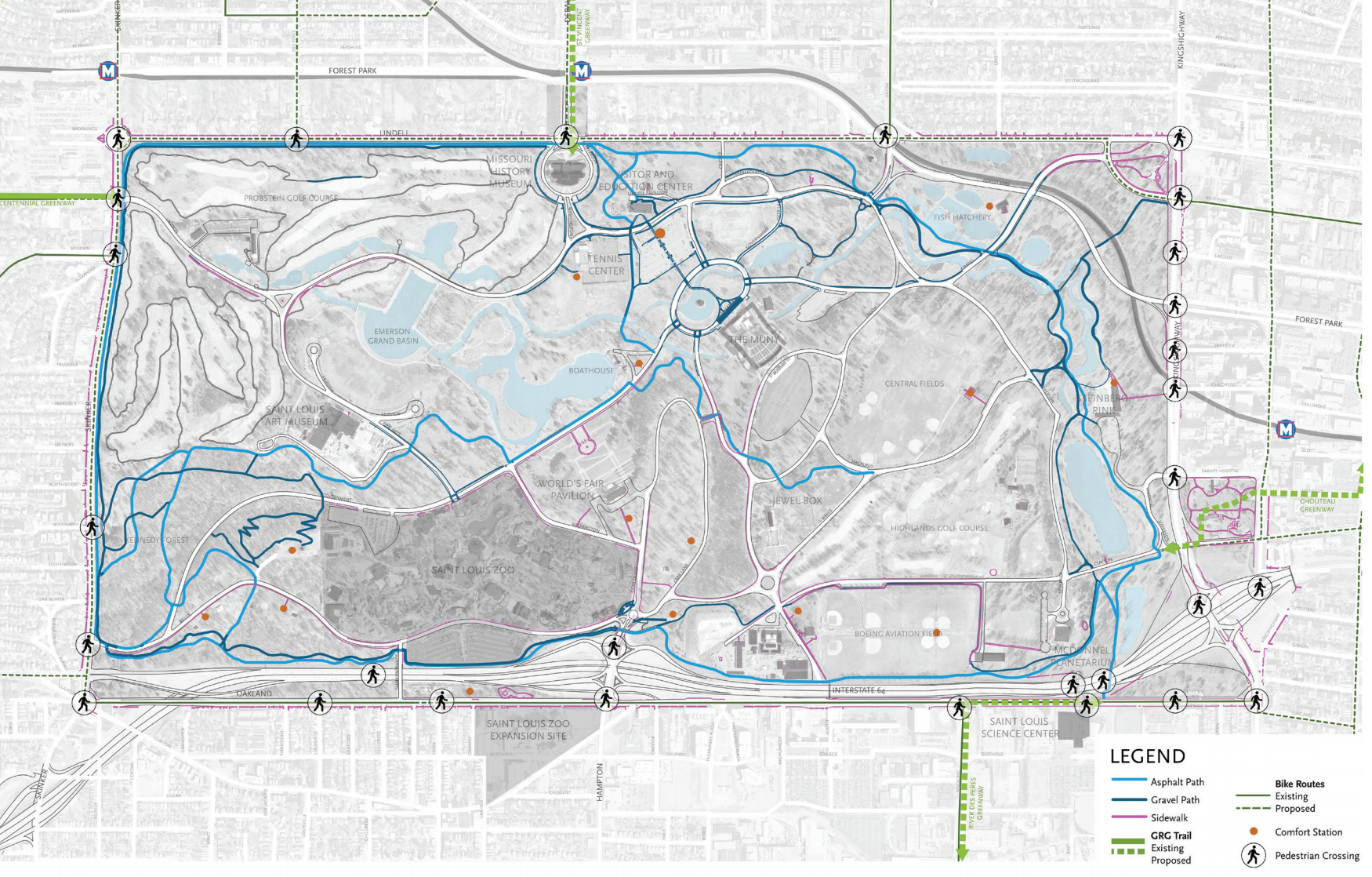 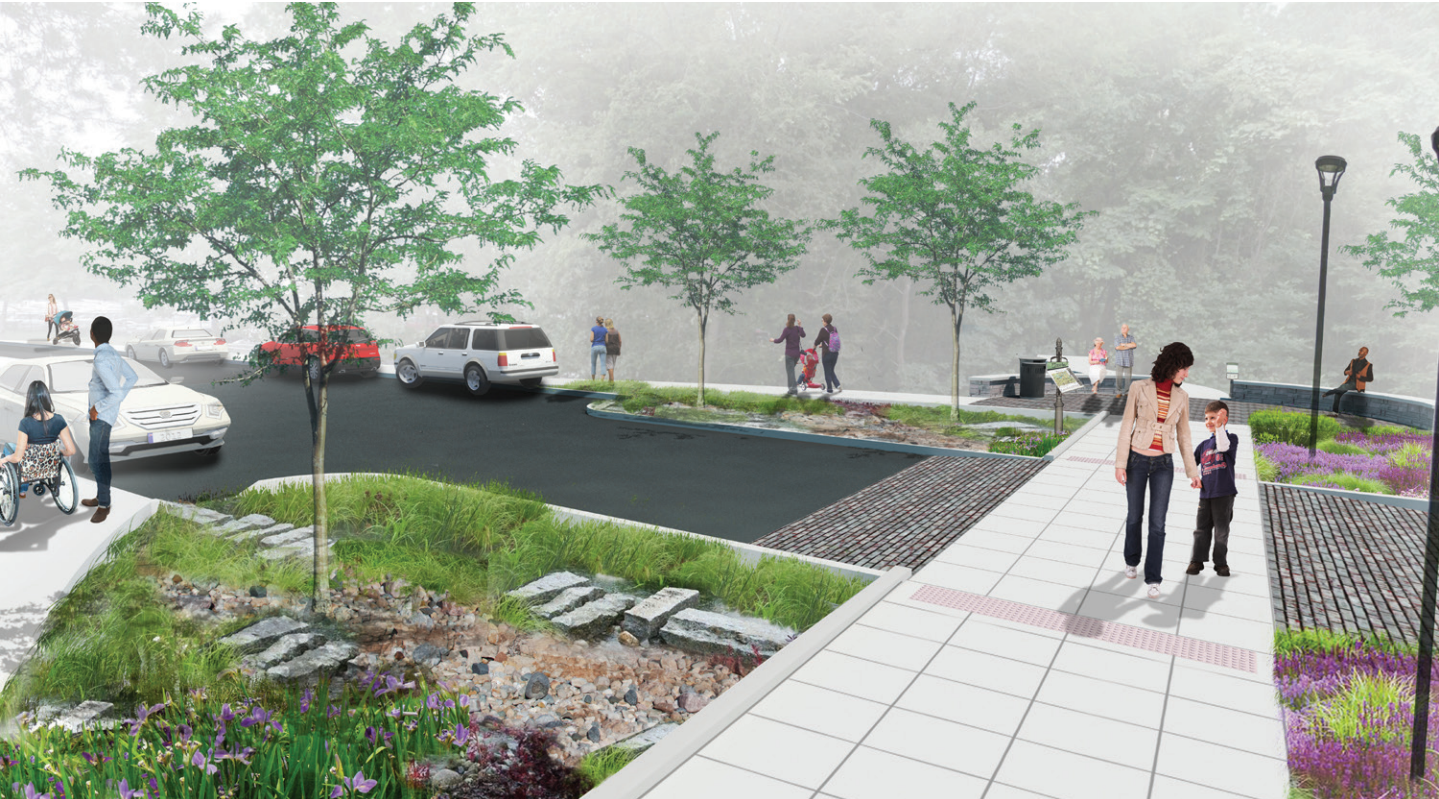 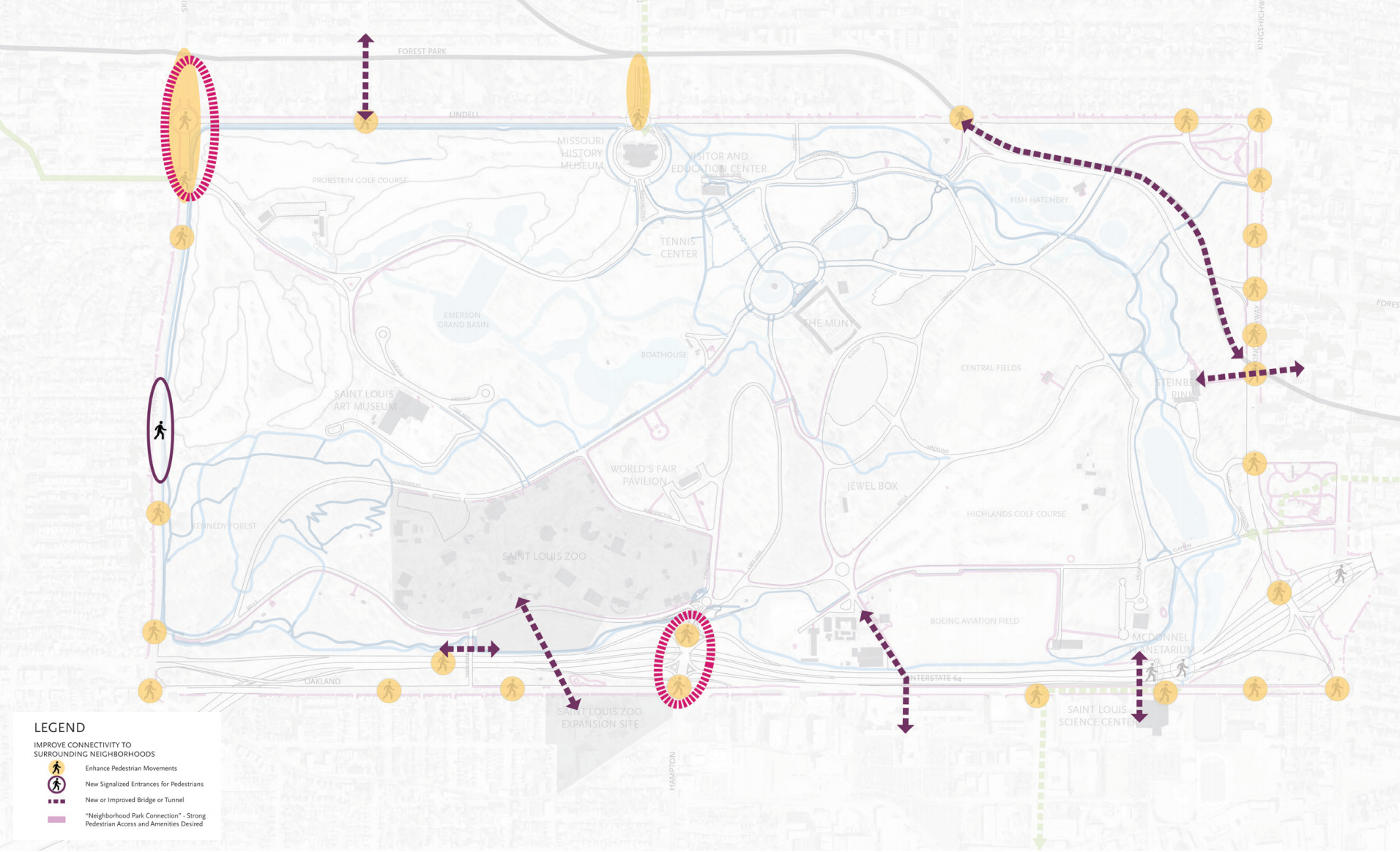 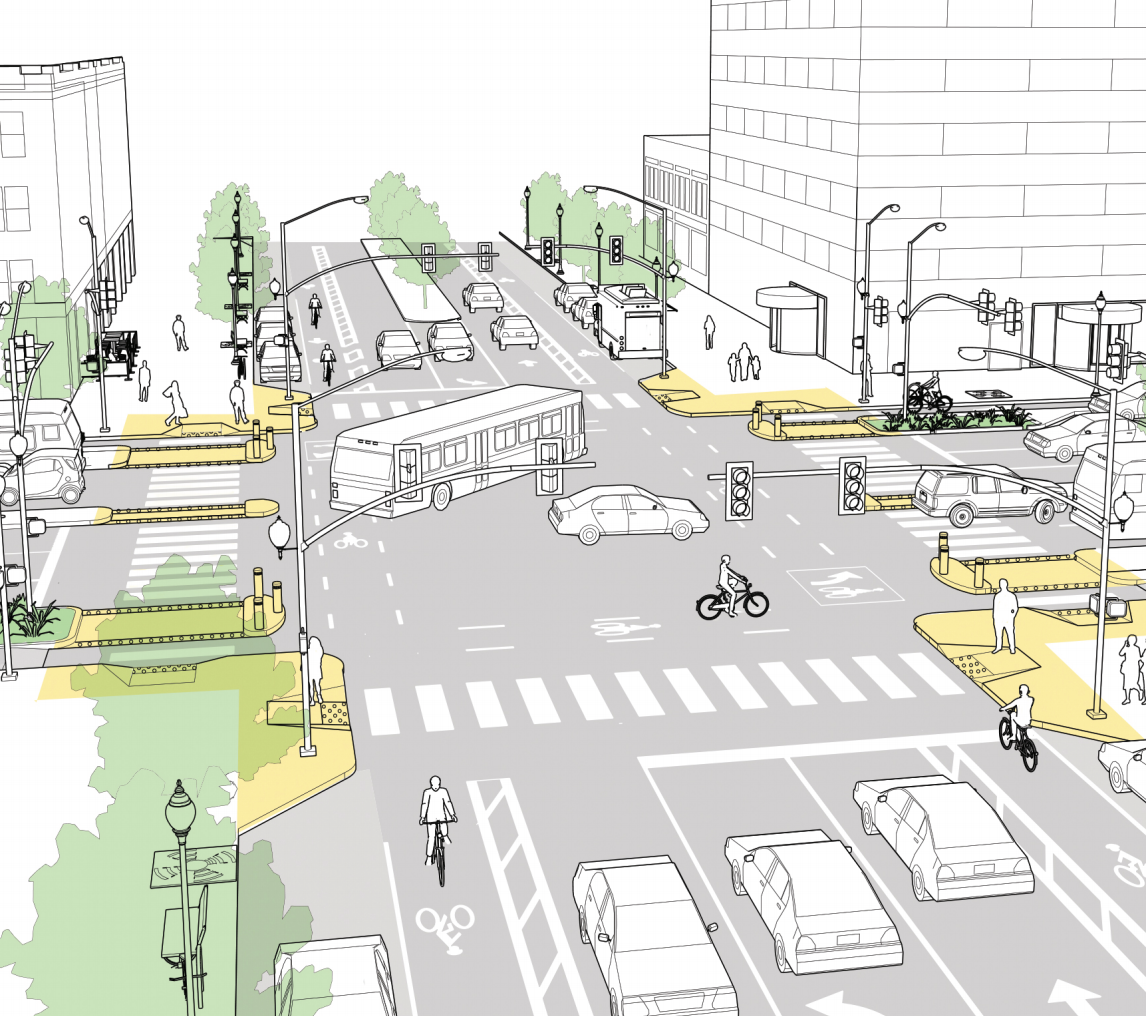 {best practices for traffic calming and transportation equity are recognized}

Inside the park, the study contemplates a full build-out of the popular dual path system. A focus would be to extend the path through the park’s northeast corner, providing more direct access to park users entering from the Central West End. The dual path could extend along Lindell to Union, and along Kingshighway south to near Jefferson Drive and the Steinberg skating rink.

Short-term, Intermediate, and Long-term summaries from the study: 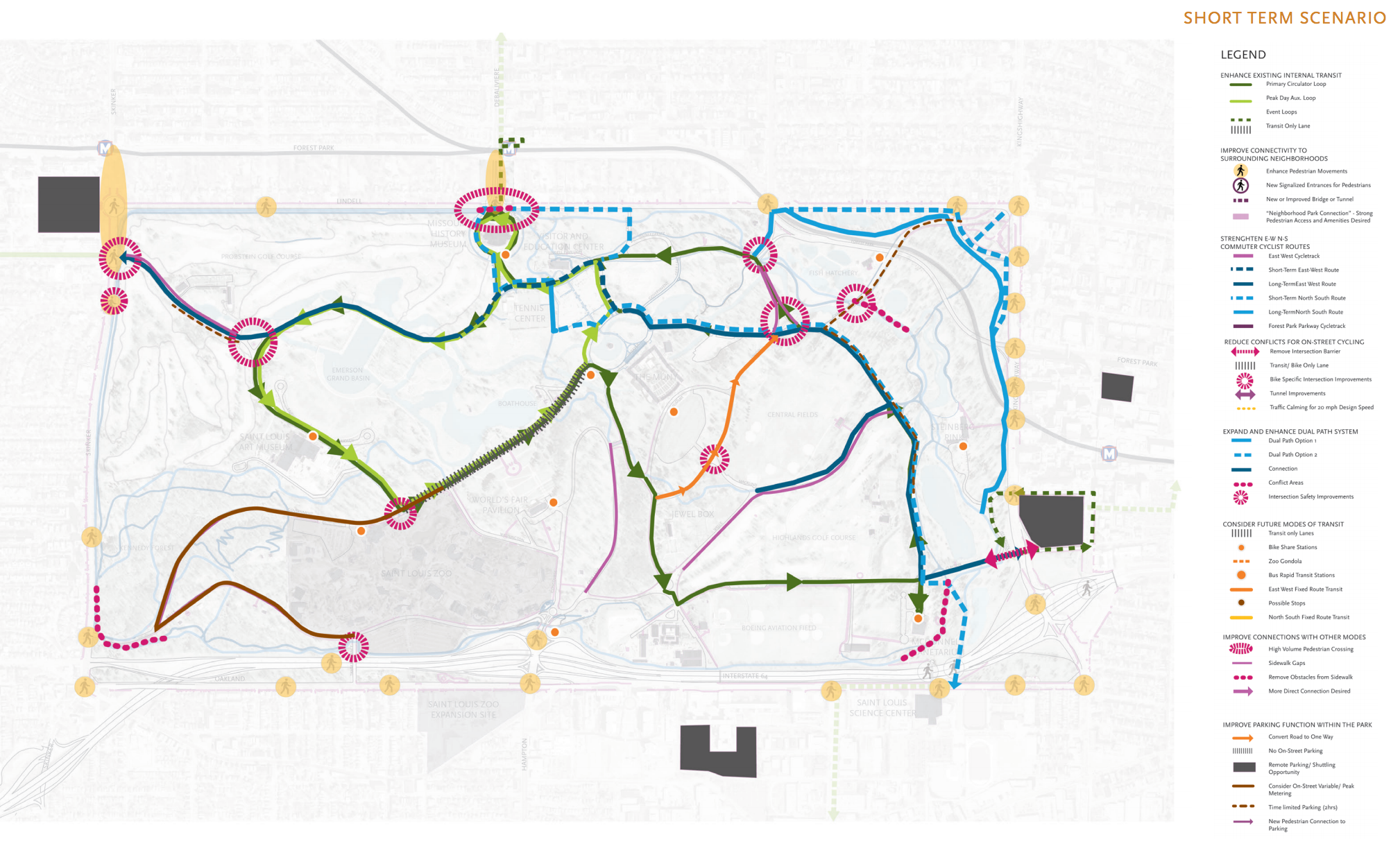 Short-term Actions
Actions for the first several years focus on laying the policy and planning groundwork needed for future actions, instituting operational changes, and programming and constructing improvements. Policies focus on elevating the status of cyclists on Park streets, initiating new design standards to enhance pedestrian and bicycle access and safety, and supporting partners in other regional transit initiatives that could benefit Forest Park.

Planning/Design focuses on collaborating with regional and neighborhood partners to soften the Park edges and better connect the surrounding neighborhoods with the Park. Planning also entails initiating the analysis and design for expected short-term projects and coordinating those improvements with partner projects currently underway. Partnerships with local leaders to advance the development of technology solutions should also be explored. Operations include changes to fare collection, branding, and routing of the Forest Park Trolley, as well as some initial actions to lay the groundwork for future parking strategies. Short-term operational changes may also include piloting road closures to enhance transit circulation, as well as testing technologies for real-time information.

Investments/Capital Projects reaches many aspects of the Park, including constructing amenities at important transit stops, improving and expanding the Dual Path and sidewalk network, and improving intersections and crossings at key locations along and inside the Park. Of course these projects should be timed and coordinated with other projects occurring in and around the Park to limit the impact of construction and leverage the overall benefit. 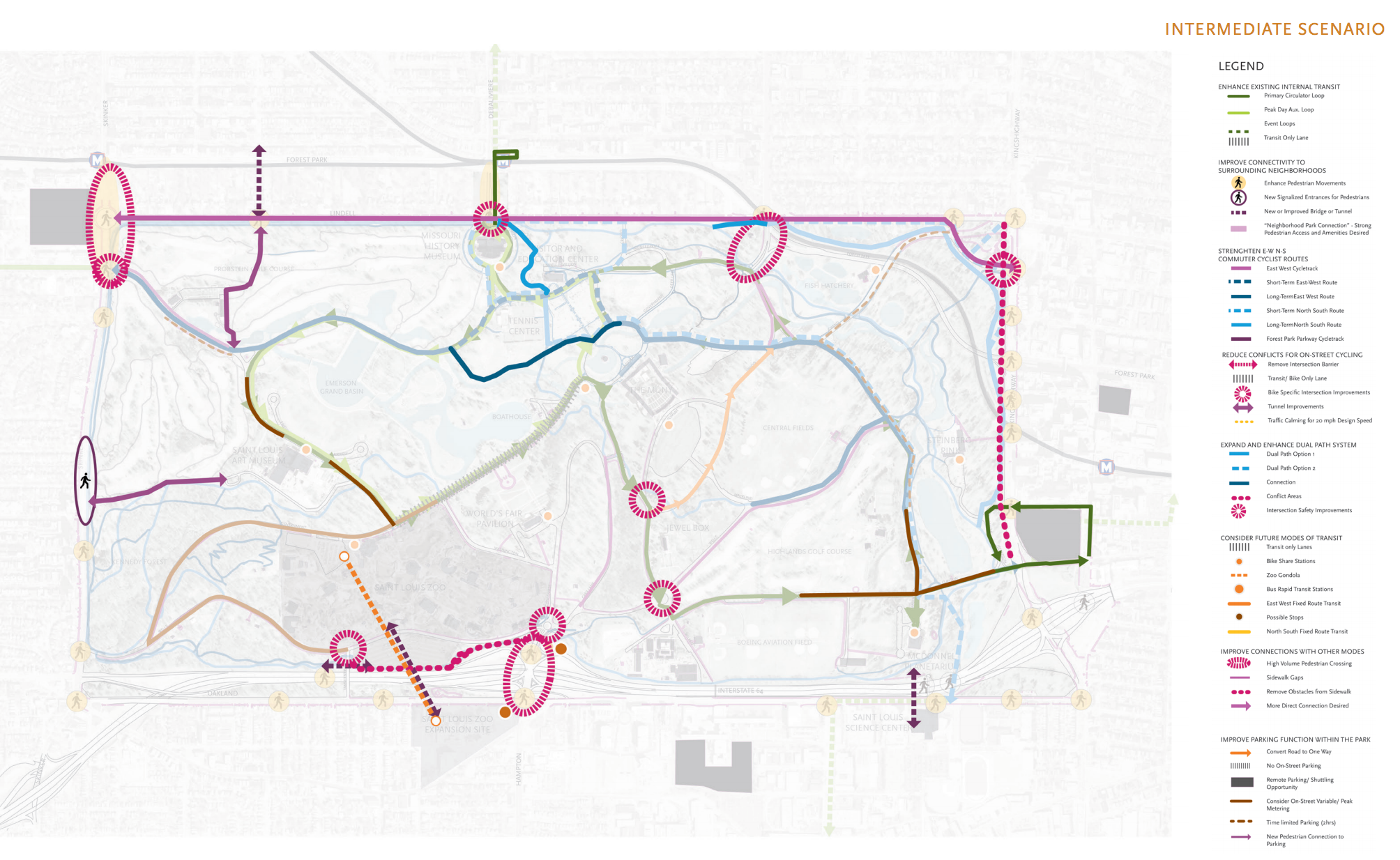 Intermediate Strategies
The intermediate actions seek to advance many of the efforts established in the short-term, as well as lay new groundwork to achieve the long-term future vision. Policies such as closing streets and exploring charging for parking within the Park could elevate multi-modal accessibility and improve transit and bicycle service. Planning will be needed to test the feasibility of such policies, as well as to analyze and design new bicycle and transit improvements such as transit/bike-only lanes and
fixed transit routes.

Planning/Design in the intermediate phase is also needed to start looking at long-term opportunities, such as a new MetroLink station or bus rapid transit station within the Park or a new underground across Kingshighway. Many of the changes to operations include expanding or making permanent some of the short-term changes, such as making the alternative special events routes permanent pieces of the internal transit route, closing more roads to vehicles, or even testing closing the entire park to automobiles.

Investments/Capital Projects include changes to the internal transit fleet, adding amenities to transit stops, implementing a fixed transit line, and building larger-scale connections to nearby neighborhoods. 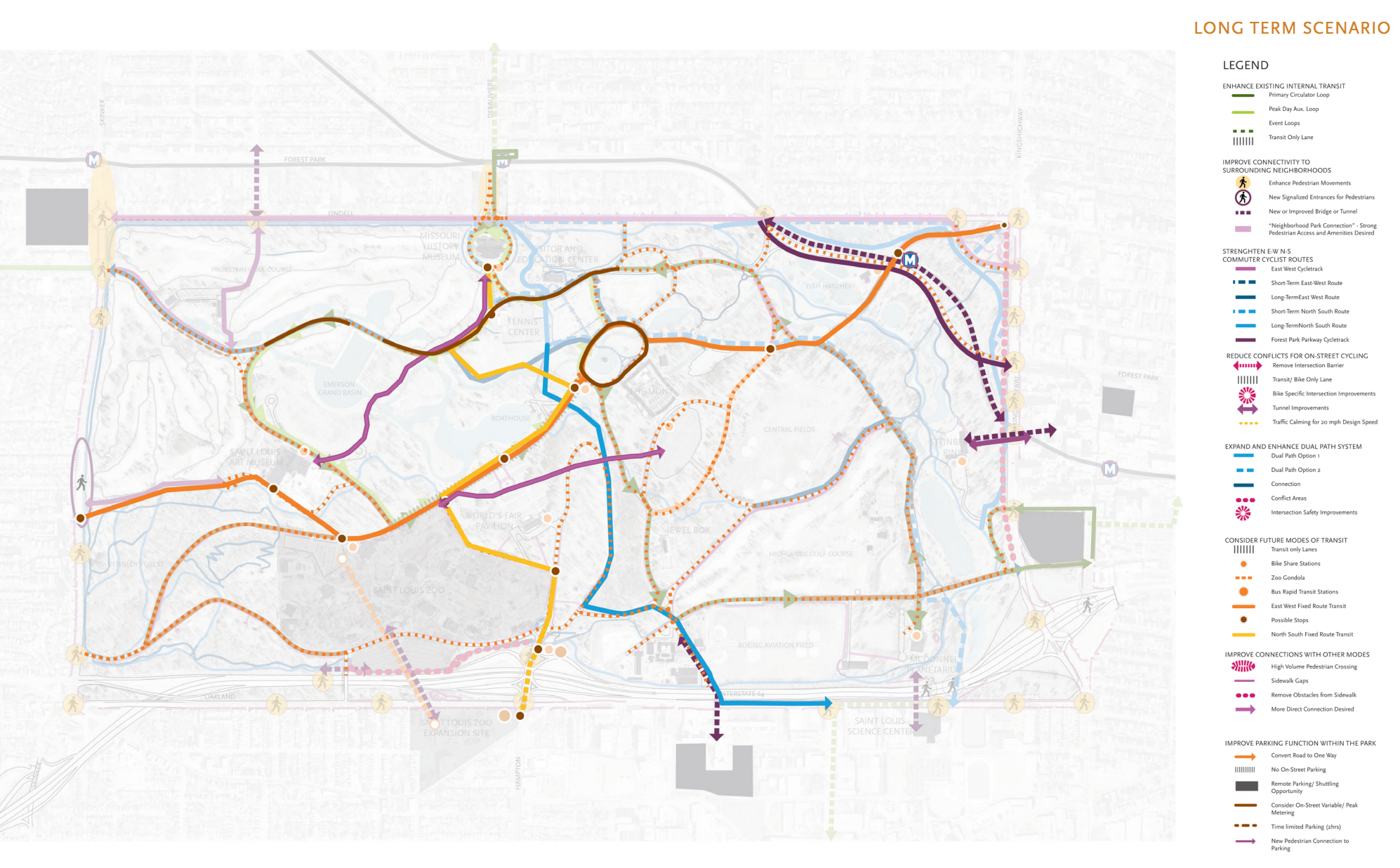 Long Term Strategies
Actions identified for the long-term vision illustrate the true potential of accessibility and mobility throughout Forest Park. These actions reflect the long-term nature of planning some larger investments and having the funding needed to build the improvements. The policies highlight changes that would need to be made if Forest Park elevated the importance of transit, cyclists, and pedestrians to be equal
to cars, and what might happen given advances in technology.

Planning/Design efforts seek full build-out and future expansion of the various bicycle and pedestrian networks, as well as the need to re-evaluate the integrated transit system to plan for future improvements. Changes to operations are minimal, as most will have been instituted in earlier years, but any changes should be done to promote the pedestrian and bicycle experience. Investments/Capital Projects in the long-term focus on connecting with the possible regional transit improvements, building more robust connections to surrounding neighborhoods, and future build-out of the bicycle and pedestrian networks throughout the Park. 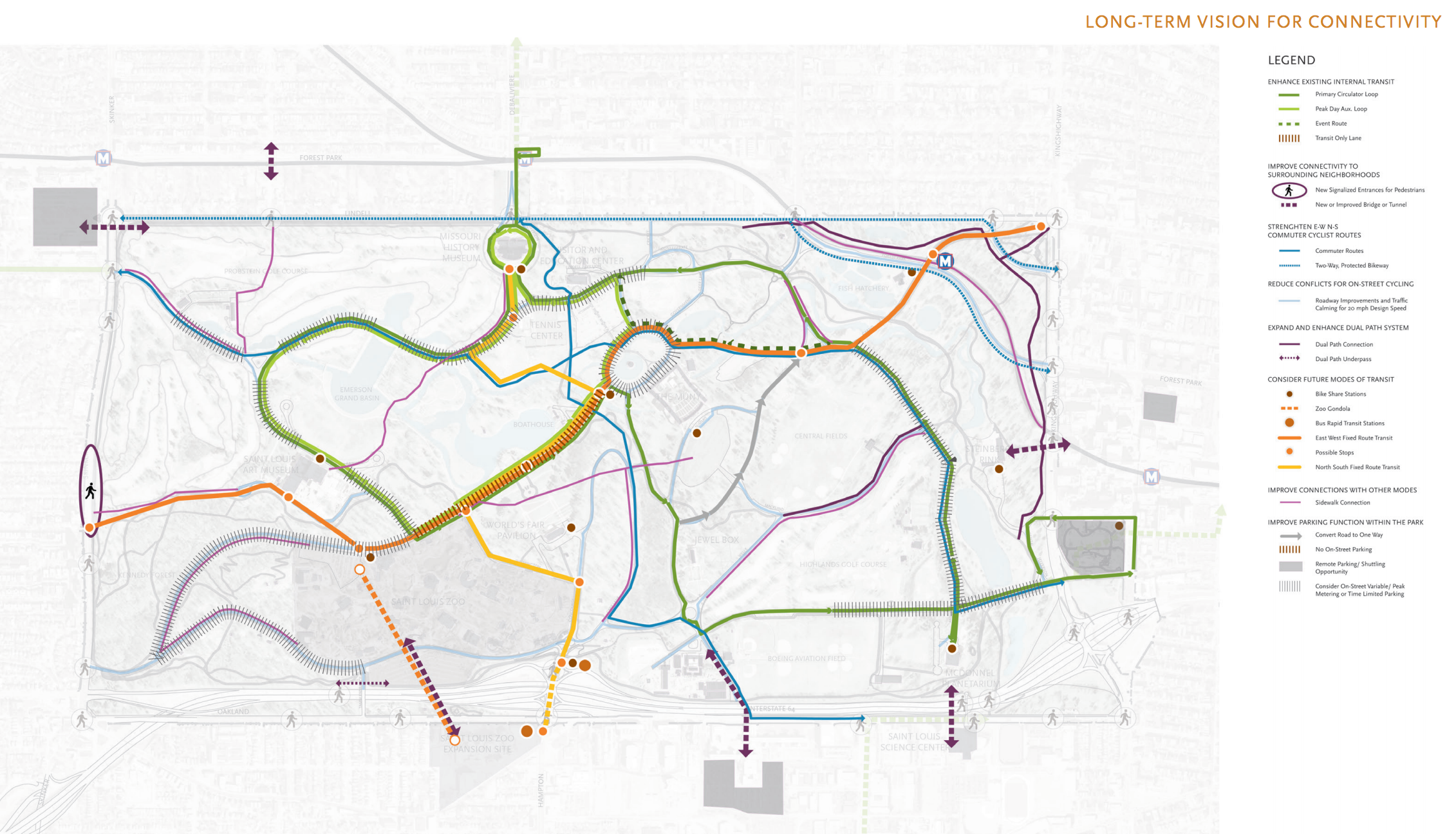 About Forest Park
Forest Park in St. Louis, Missouri, is considered one of the nation’s greatest urban public parks. The Park’s 1,300 acres feature beautiful landscapes sprinkled with forests, ecosystems, nature reserves, lakes and streams, as well as five of the region’s major cultural institutions and endless opportunities for recreation. Forest Park attracts 13 million visitors each year, making it the sixth most visited urban park in the United States. In 2016, Forest Park was voted the #1 City Park in the country by readers of USA Today.

About Forest Park Forever
Founded in 1986, Forest Park Forever is a private nonprofit conservancy that works in partnership with the City of St. Louis and the Department of Parks, Recreation and Forestry to restore, maintain and sustain Forest Park as one of America’s greatest urban public parks.

Along with the City of St. Louis, Forest Park Forever raised $100 million between 1995 and 2003 and dramatically restored many landmark destinations in Forest Park, including the Emerson Grand Basin, the Boathouse and the Jewel Box.

Today, Forest Park Forever maintains Forest Park with the City of St. Louis; raises funds for and helps manage capital restoration projects called for in the Forest Park Master Plan; delivers experiential educational opportunities to teachers, students and adults; and provides information and guides for the Park’s 13 million annual visitors. Not part of the Zoo-Museum Tax District, Forest Park Forever is supported by private donations from throughout the community, including its 7,000 members, 1,100 volunteers and many leading community and corporate partners.
_______________________________

Forest Park Connectivity and Mobility Study_2016 by nextSTL.com on Scribd