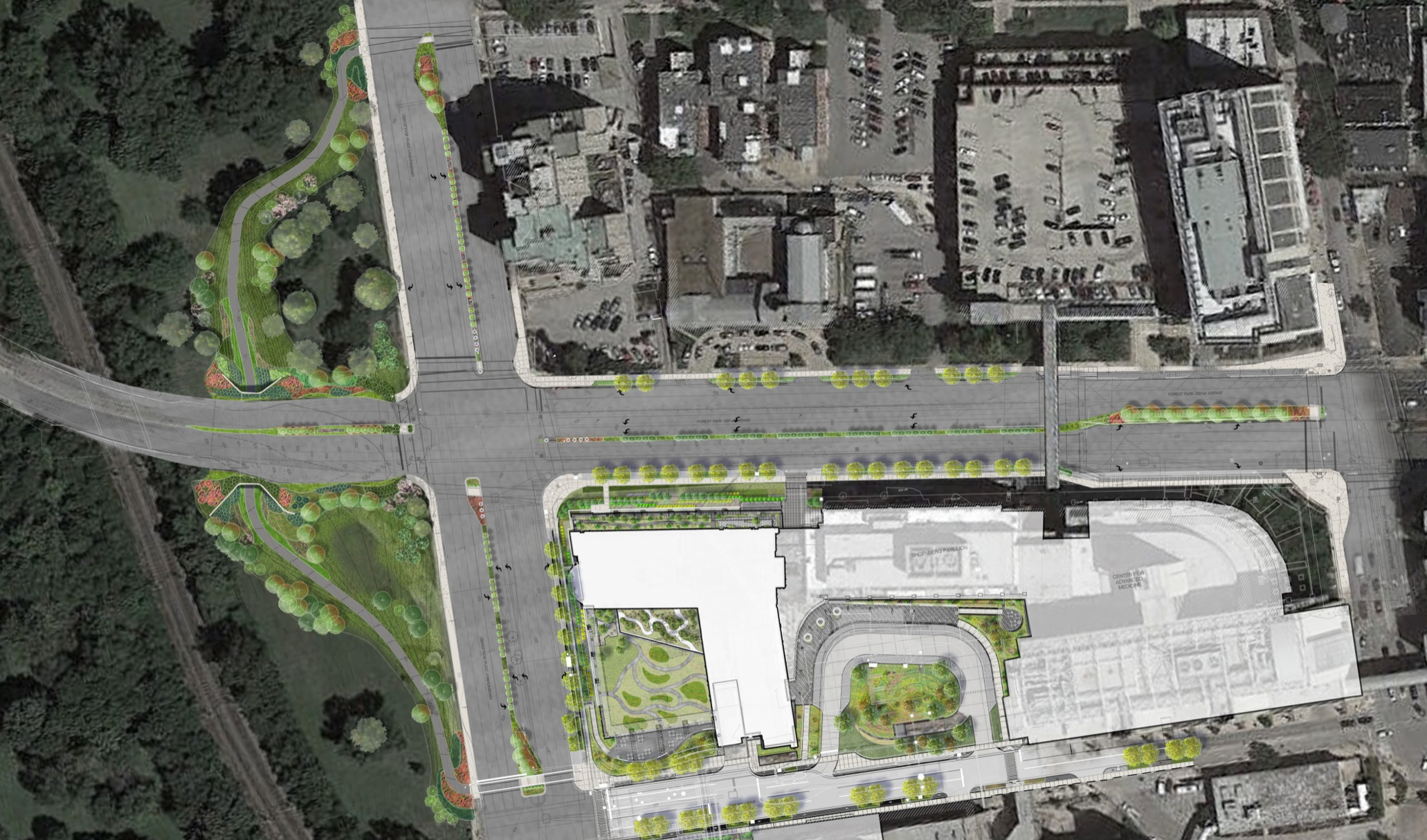 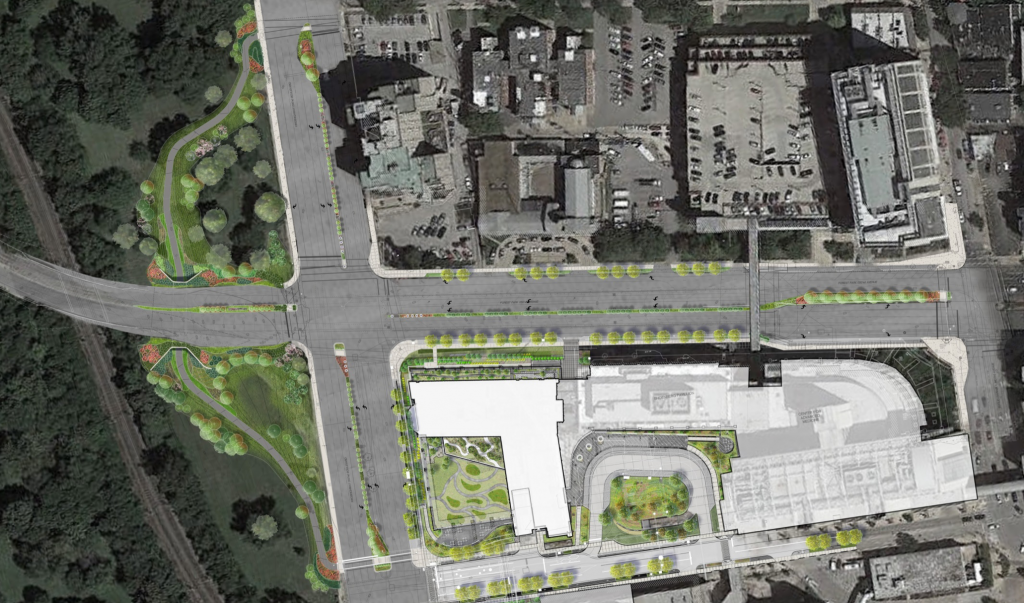 Last last year, nextSTL was first to report on plans to bring the Forest Park Parkway and Kingshighway intersection to-grade. Now we have further detailed plans, and an unofficial start date for the project early next month.

Plans call for all north-south lanes on Kingshighway to remain open during the day, with limited lane closures overnight. The submerged east-west Forest Park Parkway lanes will be closed, with one lane in each direction remaining open on adjacent Forest Park Avenue.

Plans show a landscaped median on Forest Park both east and west of Kingshighway. A 20′ wide multi-use path within Forest Park passes under Forest Park Parkway, terminating at Laclede Avenue and Parkview Place. The underpass design mirrors that of the one at Hampton within the park. Initially the path may have little practical use, but it designed to incorporate a future multi-use path extension along Kingshighway. 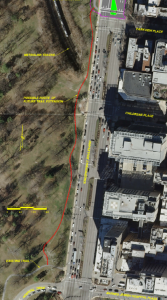 The transformation is part of the BJC Healthcare campus transformation project, a more than $1B investment in renovation and new construction on the expansive Central West End medical campus. Funding for the $10M project includes $5M from BJC, $2.5M from the Washington University School of Medicine. An additional $2.5M has been allocated via East-West Gateway and Surface Transportation Program (STP) and On-System Bridge Program (BRM) funds to replace the bridge carrying Forest Park Parkway over MetroLink tracks.

Final plan approval from the Forest Park Forever advisory board is expected later this month. Construction, including the closure of Forest Park Parkway could begin as early as July, with substantial completion and re-opened streets 12 months later in July of 2017.

While the restoration of a more traditional intersection will create better access once completed, the closure is sure to cause some headaches. Detour plans call for east-west traffic to be routed along Skinker Boulevard to I-64/40 and Boyle or Tower Grove access to the east. Many will likely use Lindell Boulevard instead.

Over the past decade, Lindell has seen increased traffic from the closure of Forest Park Parkway, and then I-64/40. The street was recently signed at 25MPH, reduced from 35MPH. Long-range plans call for a cycle track and lane reduction. Today, the design speed of Lindell is likely in excess of 35MPH.

The closure of Forest Park Parkway for the coming year is an opportunity to introduce traffic calming measures to Lindell. The changes also present an opportunity for residents of private Westmoreland and Portland place to utilize the existing signalized intersection at Westmoreland/Maryland to access their neighborhood. The additional three neighborhood gates appear functional as well.

Recently, as Kingshighway was closed for the replacement of a viaduct just south of I-44, although Vandeventer Avenue has been the main detour route, Tower Grove Avenue was expected to see increased traffic. Nascent plans for a bike lane on Tower Grove was smartly implemented prior to the Kingshighway closure. The change from four traffic lanes to two has effectively maintained Tower Grove as a neighborhood street.

The plan for the dramatic change at one of the city’s busiest intersections has proceeded without much information. There have been no public input meetings, no online comment forms, and limited communication with adjacent residents and businesses. As is often the case, when money is found for a project, things happen quickly.

The $7.5M investment by BJC and WUSM follows the cost sharing effort by MoDOT and BJC to fund a new I-64/40 interchange at Tower Grove Avenue. BJC contributed at least $8M to that $23M project completed in 2014. A new MetroLink station at Boyle Avenue in Cortex recently broke ground and is funded by a $10.3M federal TIGER grant.

In February of last year, a comprehensive bike share implementation study was completed for St. Louis. The study concluded that a two-phase implementation growing to 810 bikes and 90 stations would require $8.5-$10.5M in support beyond revenue to cover the first five years of operation. In Cincinnati, RedBike is sponsored by the UC Health, while the Kansas City’s B-Cycle, established in 2012, is supported by Blue Cross and Blue Shield. 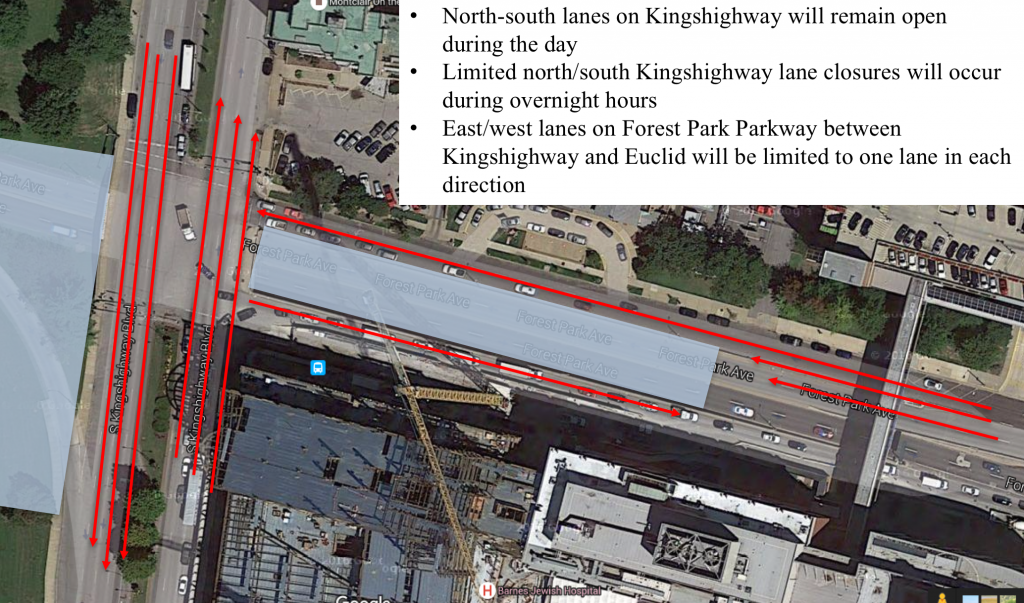 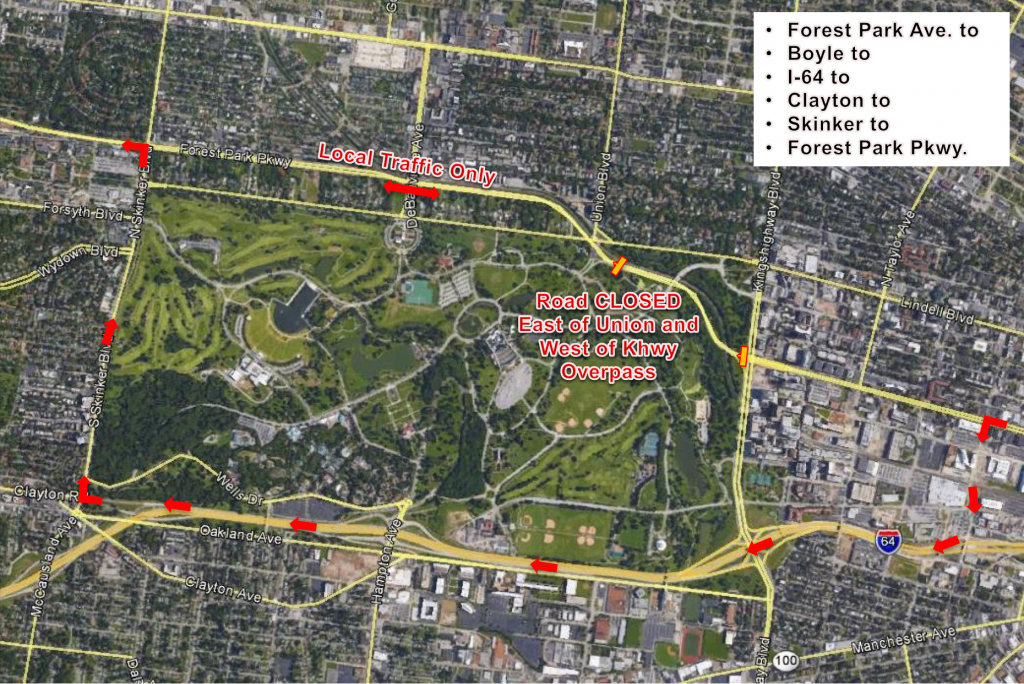 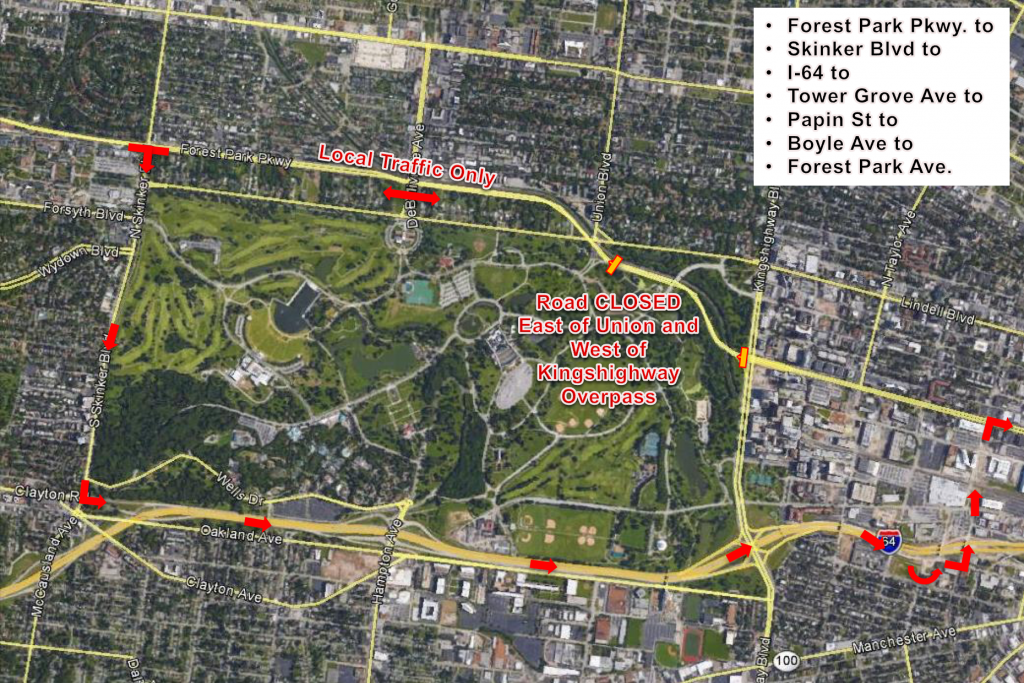