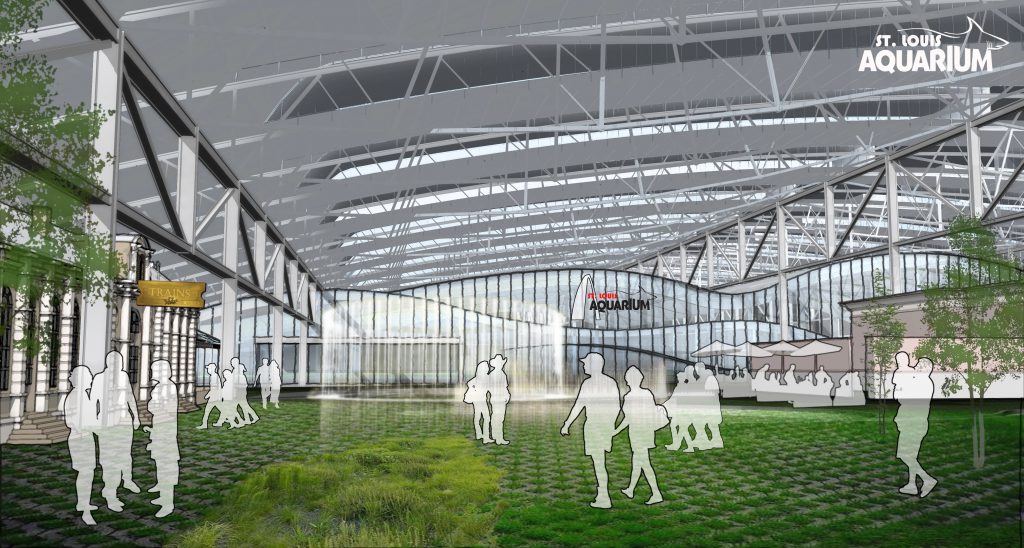 Union Station will soon be home to the St. Louis Aquarium. Lodging Hospitality Management, owner of the iconic train station will announce today that construction will begin soon and the approximately 80,000 sf, 1M gallon aquarium could open in 2018. The $45M project is in addition to plans to bring a 200ft Ferris Wheel to Union Station, and other projects.

While a final agreement with an operator has been made, the aquarium is likely be similar in size and features to the Sea Life aquariums in Kansas City, Orlando, and six other U.S. cities. Those aquariums, however, are smaller than plans in St. Louis with the $15M Kansas City attraction coming in at 260,000 gallons and 28,000sf, and Orlando at 25,000sf. A shark tank is planned as the St. Louis aquarium’s largest single attraction, and could top half a million gallons. An event space would be anchored by a view into the shark tank and be available for private events.

While the cultural attractions in the city’s Forest Park, with the St. Louis Zoo, Missouri History Museum, St. Louis Science Center, and St. Louis Art Museum, provide a full day or more visit for families, downtown is aiming for something similar. The aquarium will have an admission price and is not planned to be part of the St. Louis Zoo Museum District, which supports the above institutions as well as the Missouri Botanical Garden. With a newly expanded Jefferson National Expansion Memorial museum and arch grounds, new Kiener Plaza and City Garden sculpture park, and City Museum, there could be a critical mass of attractions.

Plans for a Fire & Light Show at a renovated lake under the train shed could open this year. A light show projected on the train shed panels will play every 30mins. Existing a restaurants are planned to remain, with a new boardwalk giving better access, and a cantilevered net providing a hammock space above the water. That part of the project is being designed by Groudswell Design, which completed the lauded Spruce Street Harbor Park in Philadelphia. 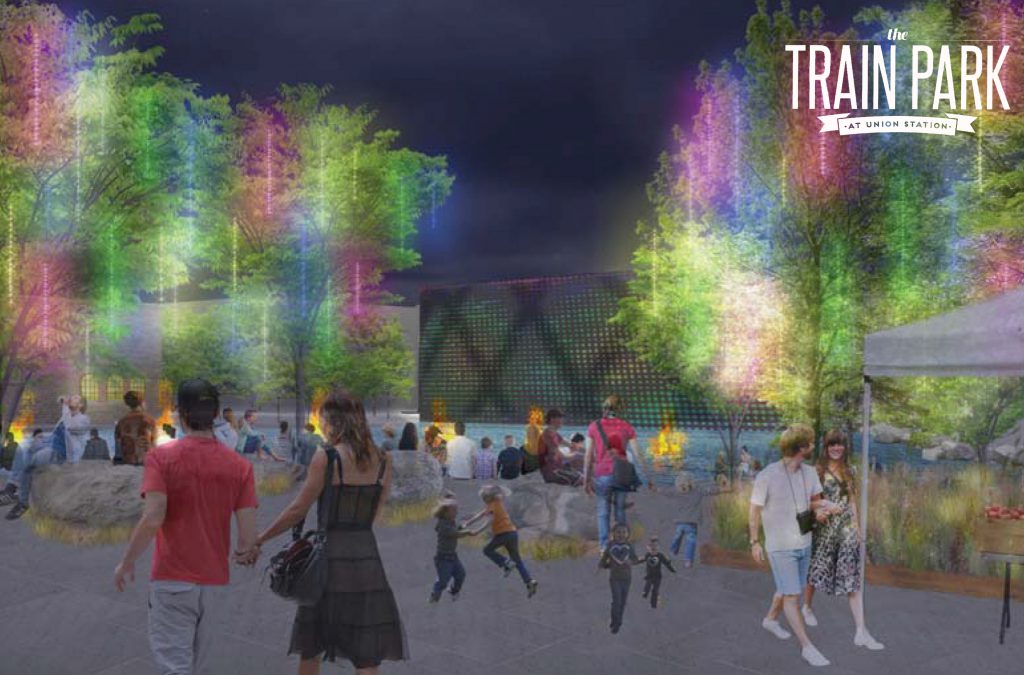 Changes are coming the Union Station Hotel as well, with 32 new rooms being added in the clock tower section of the building. That $5.5M project will increase the hotel’s total rooms to 571 and is planned to be completed late next year. Additional meeting rooms and event space will be added to the station’s Midway also.

Chicago of course is home to the largest aquarium in the Midwest, once the largest indoor aquarium in the world. Opening in 1930, Shedd Aquarium now has 5M gallons under its roof and is one of the most visited aquariums in the nation with approximately 2M annual visitors. The Georgia Aquarium (2005) is now the largest at ~8M gallons attracting ~2M visitors each year. 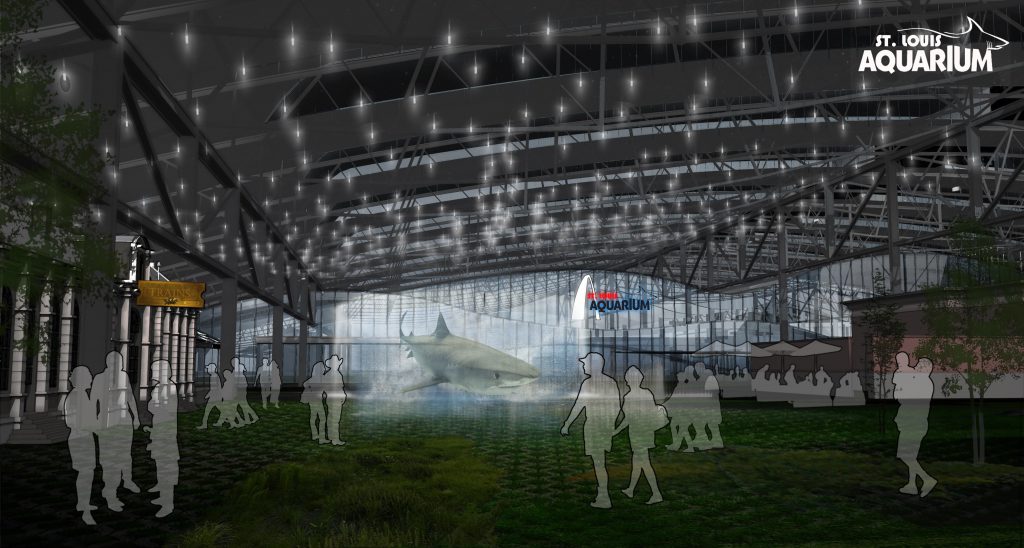 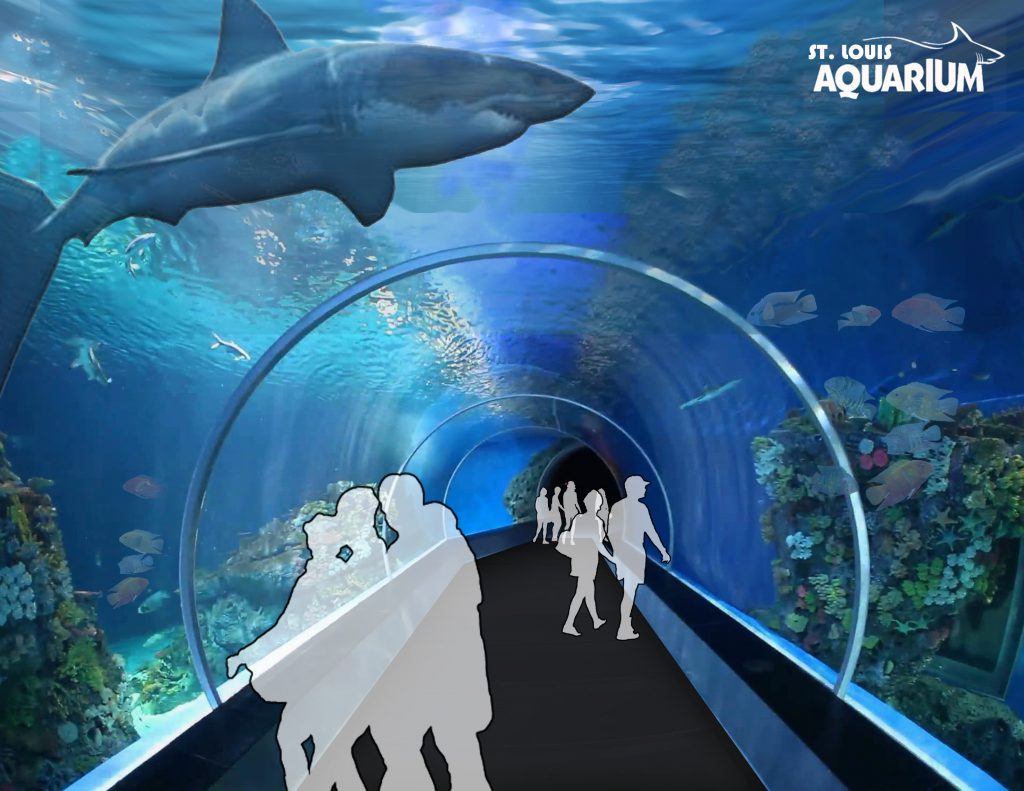 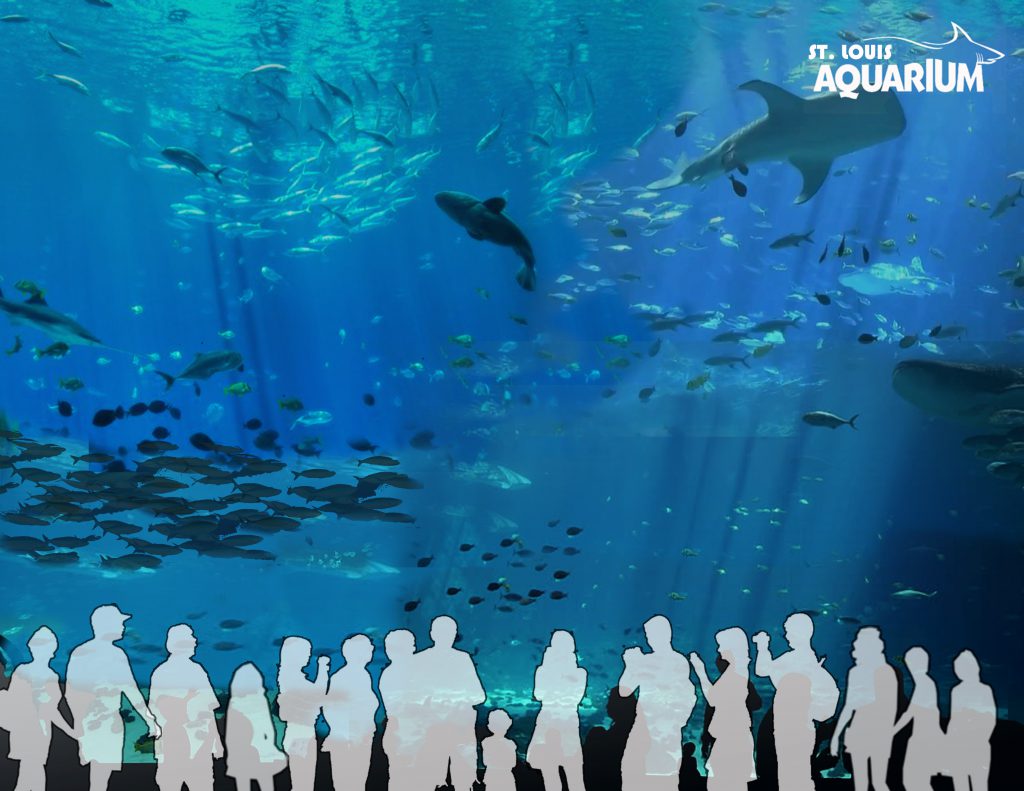 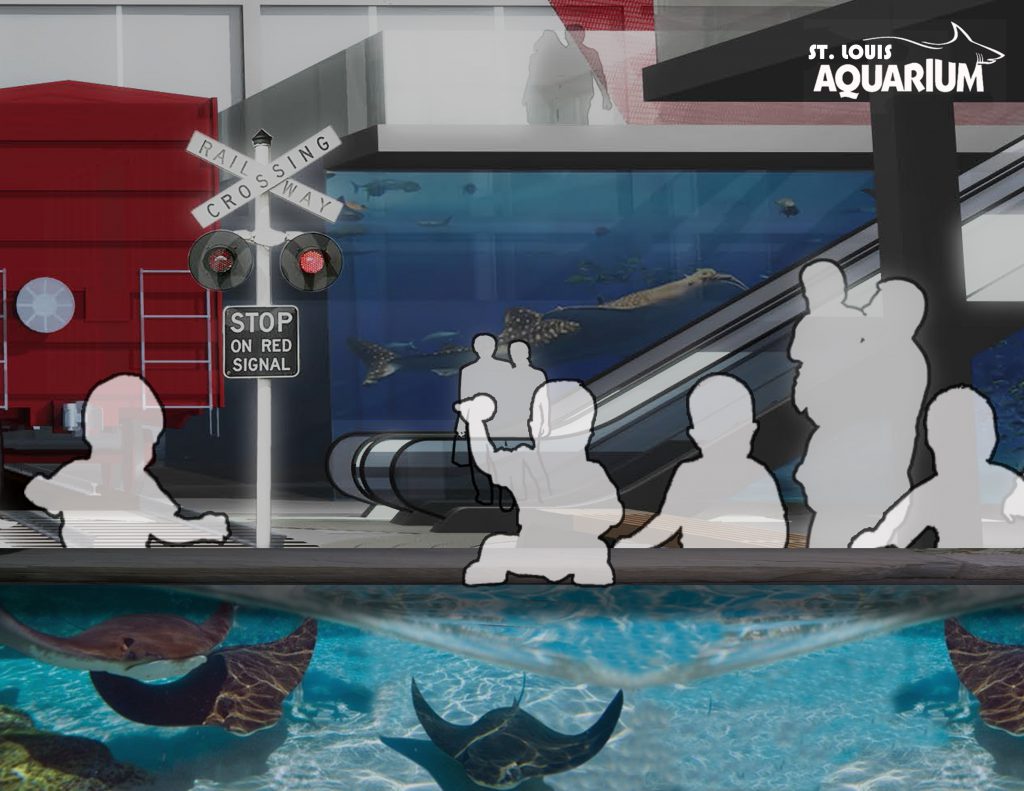 In January of last year, the St. Louis City Board of Aldermen gave support to $18.5M in Tax Increment Financing over 23 years for an “amusement park” at Union Station. The TIF Plan, TIF Agreement, and TIF Note were passed more than a year ago.

A 1985 remake of Union Station as a festival marketplace was a big success, but the site failed to evolve and adapt to changing shopping habits, and the loss of about 200,000 city residents, nearly 40% of the population since it opened. The new plans by LHM, which acquired the property in 2012 for $20M, is a big bet on tourism. 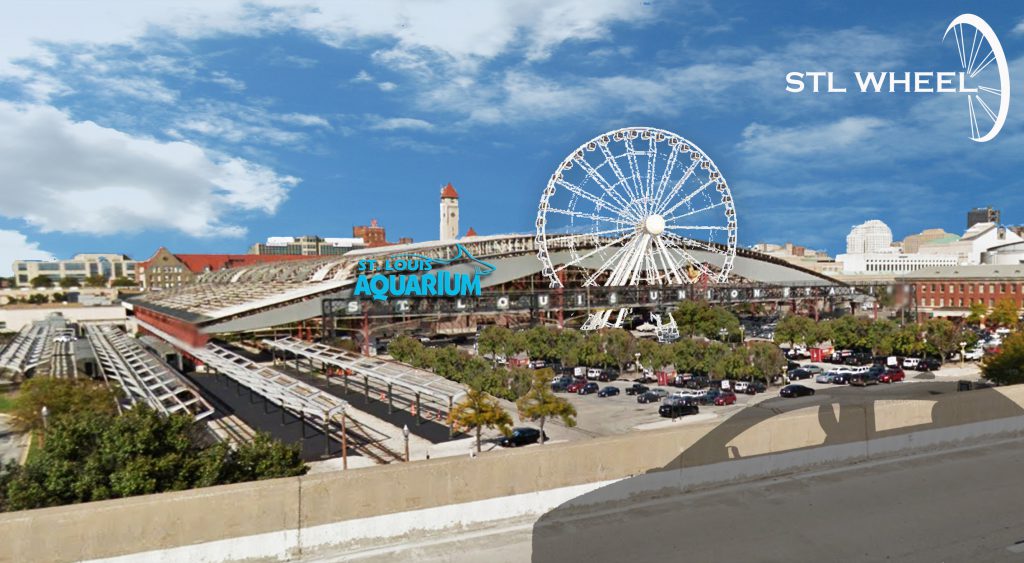 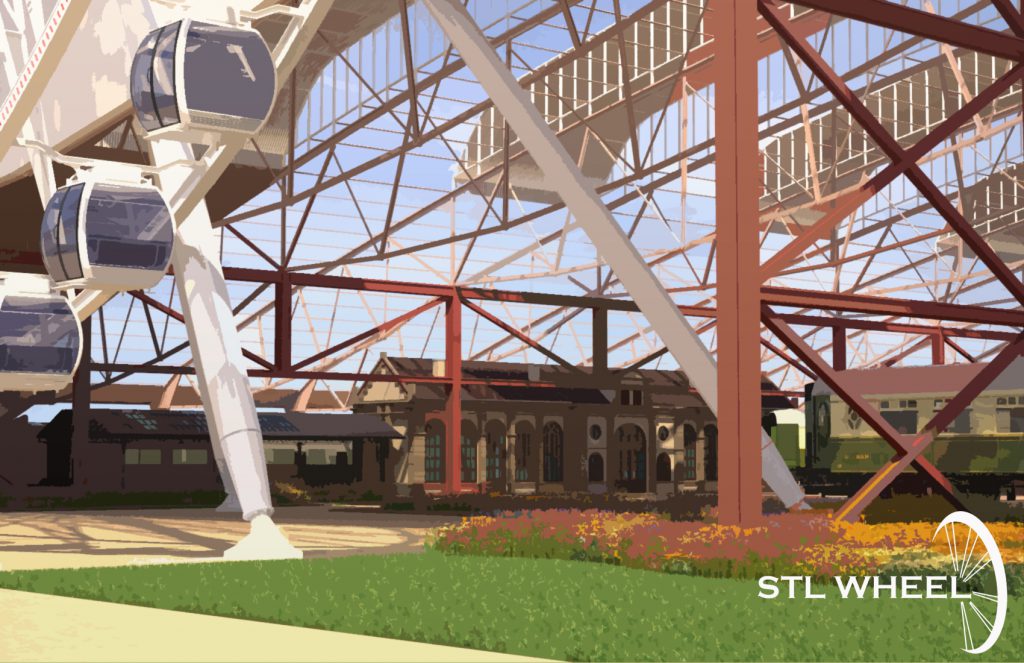 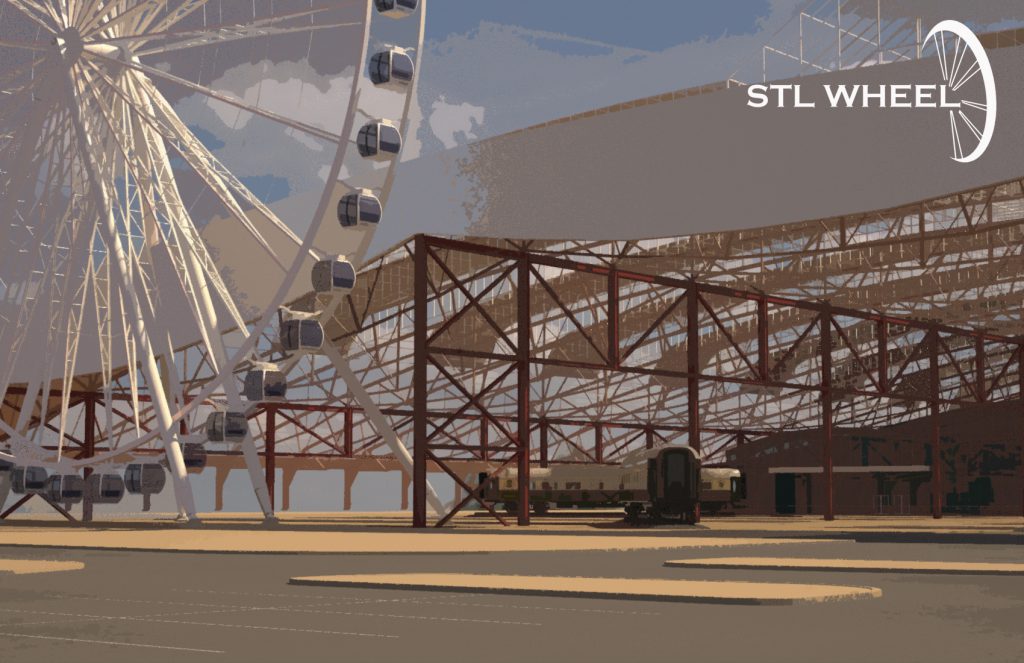 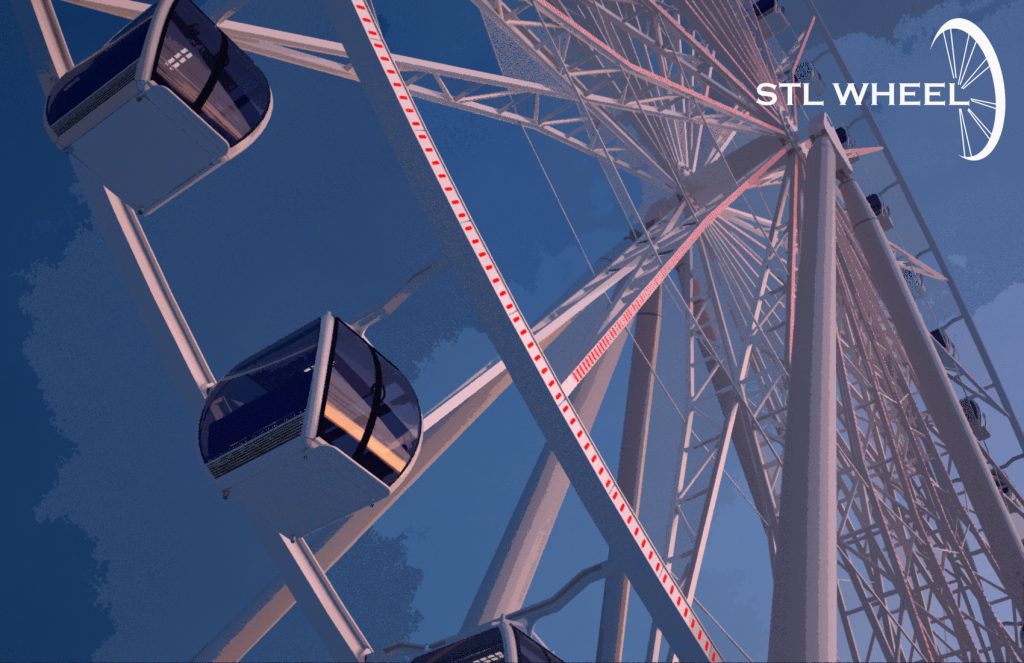 The next big redevelopment of St. Louis’s historic Union Station is set to break ground next month. Planned are more hotel rooms and more entertainment, including light shows, a fire show, and a 3D experience.

Past plans for a roller coaster are no more, but the 200-foot Ferris Wheel is still planned, and the historic train shed will see a full restoration. The total project is expected to be near $100M.

Recent investments at Union Station, such as the Grand Hall laser light show and specialty train excursions have proved popular and so the larger redevelopment plan was tweaked to capitalize. Most retail tenants, save a Cardinals shop and The Fudgery, are expected to go, again according to the Post-Dispatch.

The Ferris Wheel will be similar to SkyView Atlanta, which features 42 enclosed gondolas and rises 200 feet above Centennial Park. The Union Station Ferris Wheel is planned to open in 2018. Also planned are shipping containers converted to accommodate food venders and a new pedestrian entrance at Clark Avenue and 18th Street. 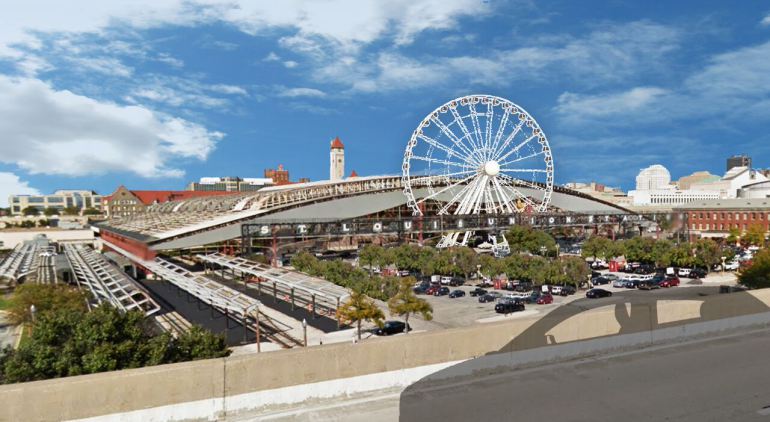 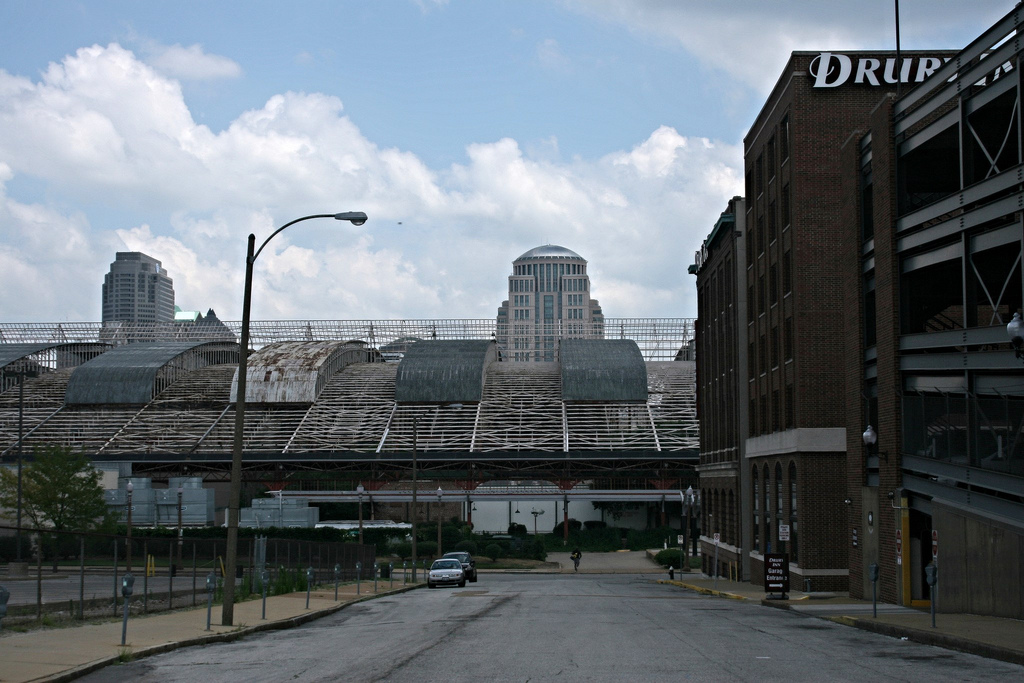 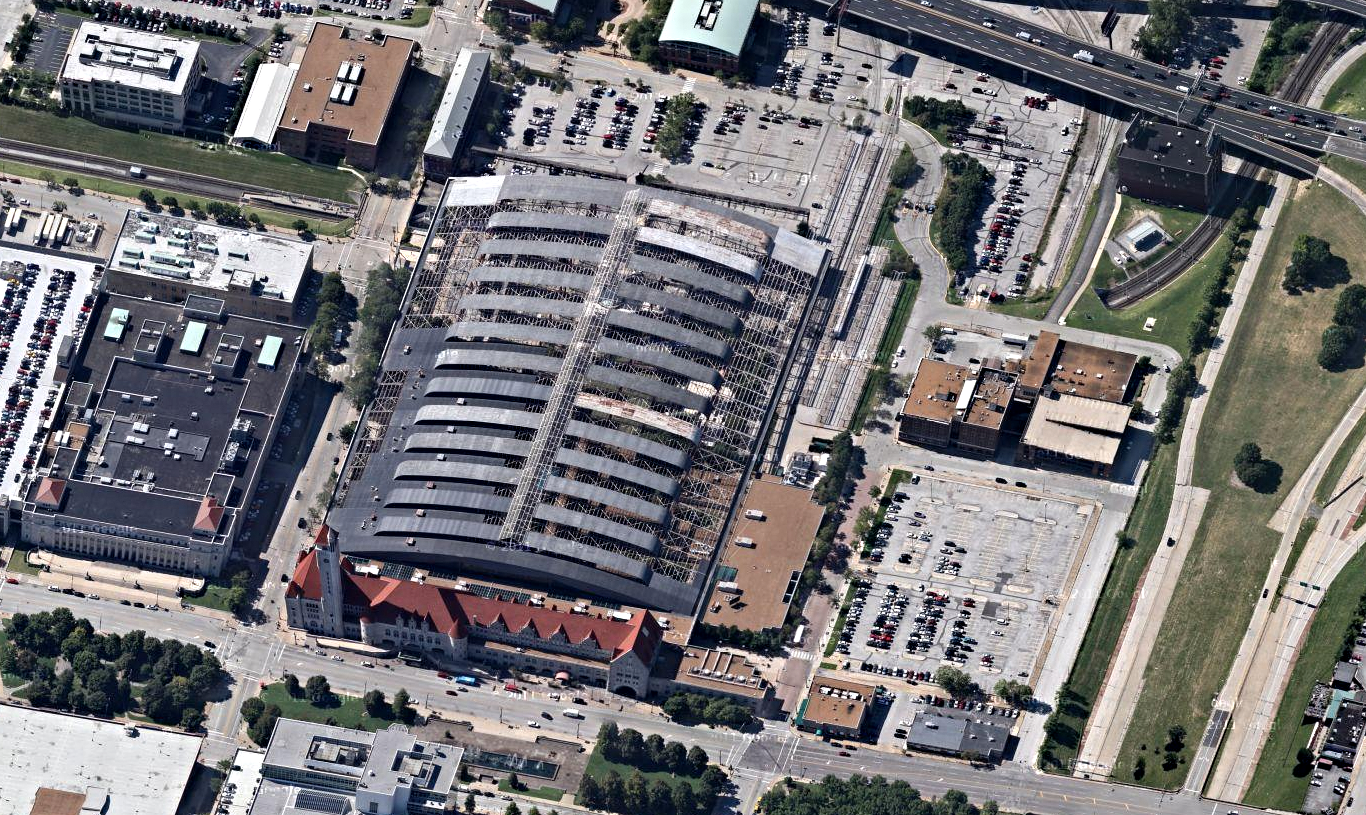 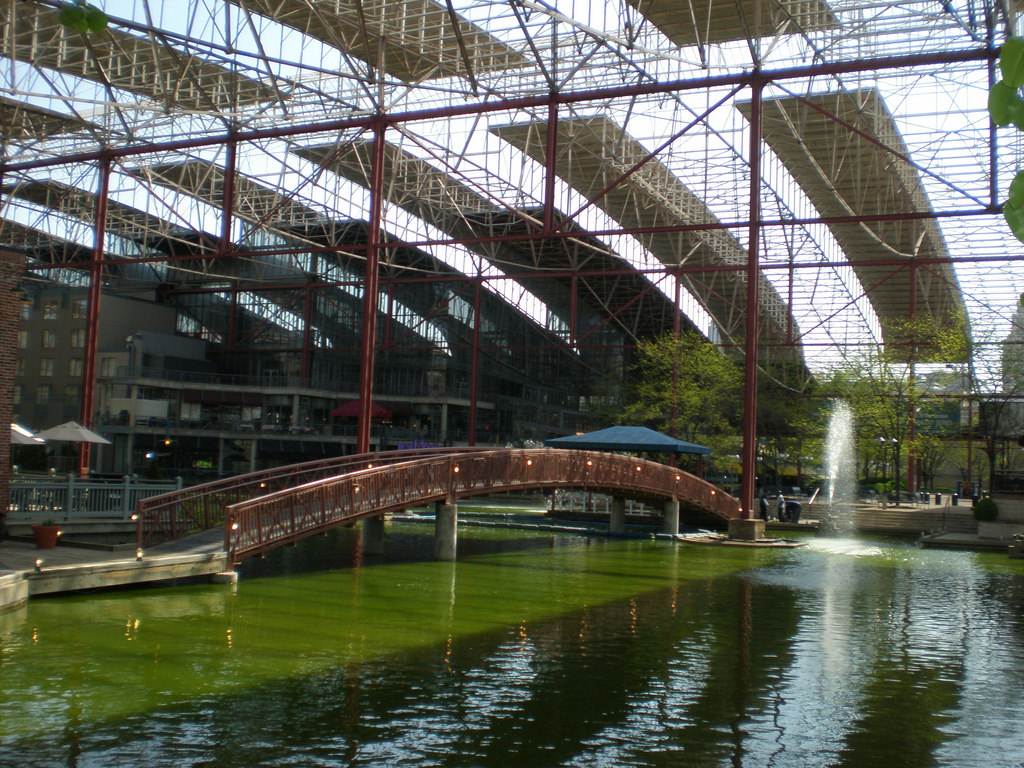 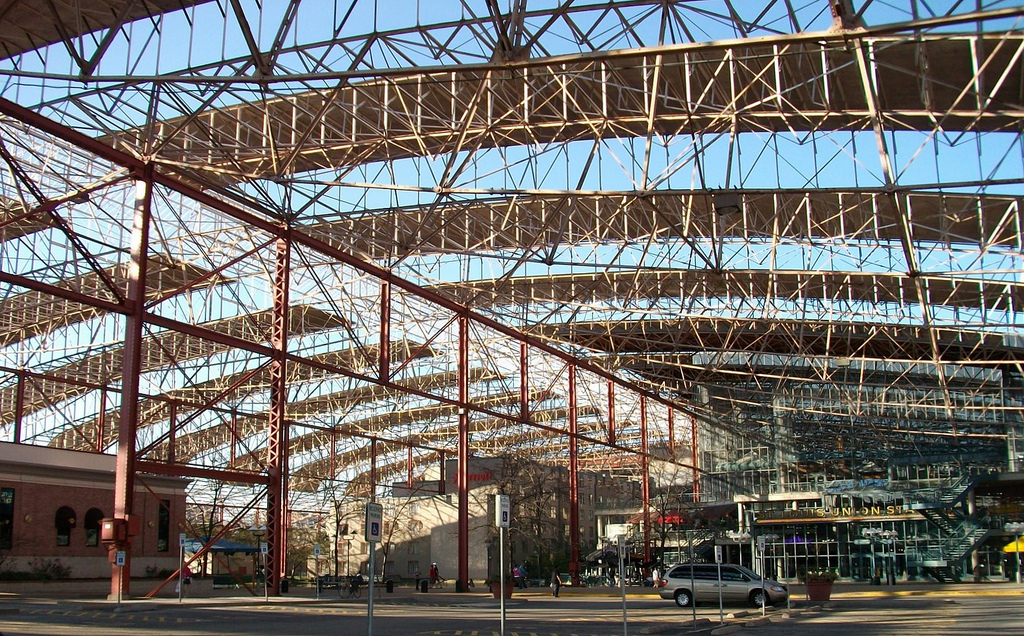 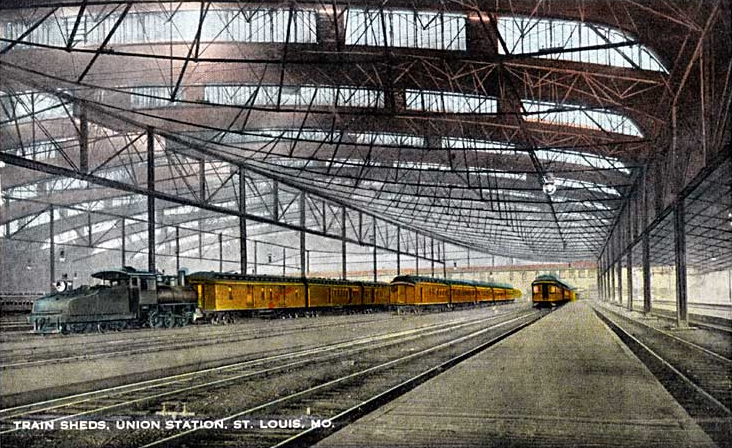 Construction is planned to begin in fall 2016 with an anticipated completion in fall 2018.

The 75,000-square-foot St. Louis Aquarium will be located in the former mall area within St. Louis Union Station. The $45 million attraction will feature one-of-a-kind exhibits and tanks with one million gallons of water housing thousands of aquatic species. A shark tank holding one of the largest collections of sharks in the Midwest will be a highlight of the new attraction. The exhibit will feature a Shark Bridge, a unique V-shaped rope bridge that will suspend visitors just inches above the 385,000-gallon shark-filled tank. For guests brave enough to walk across, the Shark Bridge will offer a thrilling vantage point above the sharks, stingrays and hundreds of fish.

The attraction will be open 365 days a year from 9 a.m. to 7 p.m. One million visitors are expected annually.

The St. Louis Aquarium will be an accredited member of the Association of Zoos and Aquariums (AZA) which holds members to the highest standards in animal care and exhibition. The facility will employ an animal husbandry team of marine biologists and aquarists responsible for the long-term care of the animals in the exhibit as well as overseeing water chemistry, animal nutrition, veterinary care, education, staffing and safety.

The aquarium will be an exceptional educational experience for school groups and an entertainment destination for local and out-of-town visitors. An 8,500-square-foot private event space will feature the Shark Tank as a backdrop for weddings, social events and corporate parties.

The St. Louis Aquarium will be part of a $70 million family entertainment complex located at St. Louis Union Station. Other components will include the previously announced St Louis Wheel, a 200-foot-high observation wheel with 30 fully enclosed, climate-controlled and ADA-compliant gondolas that seat up to six adults each. Wheel passengers will take three to four rotations high over the St. Louis skyline during the 10-to-12-minute ride. The St. Louis Wheel will be a new iconic attraction on the St. Louis skyline and will be operational every day of the year.

Other phases of the entertainment complex at St. Louis Union Station are underway in an area beneath the historic train shed that will be known as The Train Park. The Train Park will feature food and beverage concessions served out of train cars and shipping containers, the Fire & Light Show at the Lake, the St. Louis Wheel, the Hard Rock Café and Landry’s restaurants, and new retail and family attractions.

The first phase of development – the Fire & Light Show at the Lake – will open by November 2016. The show emanates from nine fire pods submerged in the watery pool. Tube lights, hung from trees in the Train Park, and a light show projected onto the ceiling panels of the train shed above the lake, will create a display synchronized to music on view every 30-minutes on the hour.

A new boardwalk around the lake will allow guests to stroll completely around the water and connect to both the Hard Rock Café and Landry’s restaurants. A cantilevered net lounge will be installed between the restaurants where guests can relax in a hammock-style lounge that hovers above the lake to view the Fire & Light Show.

The Train Park and Fire & Light Show are being created by Groundswell Design of Philadelphia. The company recently completed the popular Spruce Street Harbor Park in Philadelphia. That attraction was recently named in the national media as one of the best places to visit in Philadelphia and has become a popular gathering space for locals and visitors alike with floating gardens, colorful hammocks and food and drink from local restaurants. To learn more about Spruce Street Harbor Park, visit the website at www.delawareriverfront.com.

Enhancements also are continuing at the St. Louis Union Station Hotel which will add 32 new hotel rooms beneath the clock tower section on the Market Street side of the building’s northeast corner. Construction on the rooms will start in January 2017 with completion by fall 2017. The hotel currently offers 539 rooms and will increase to 571 rooms when the $5.5 million project is completed.

The hotel also will add 15,636 square feet of new meeting space by expanding the Midway east to 18th Street. Six new breakout rooms ranging from 1,600 to 2,835 square feet will be added along with another 8,700 square feet of flexible event space created with one of the shark tanks as a backdrop at the cost of $3.5 million. Construction on the meeting space will begin in January 2017 with completion by fall 2017.

The National Historic Landmark St. Louis Union Station at 1820 Market Street in downtown St. Louis opened to the public on September 1,1894 and was owned by the Terminal Railroad Association of St. Louis. Designed by Theodore Link, it included three main areas: the Headhouse, the Midway and the 11.5-acre train shed.

At its height, the station combined the St Louis passenger services of 22 railroads, the most of any single terminal in the world. It was the world’s largest and busiest railroad station when it opened in 1894 and its train shed was noted as the largest roof span in the world. In 1903, the station was expanded to accommodate visitors to the 1904 St Louis World’s Fair.

St. Louis Union Station is owned by Lodging Hospitality Management (LHM). The hotel has been named one of the world’s top railway themed hotels by Condé Nast. For information, visit www.stlouisunionstation.com/union-station-hotel/.

LHM has expanded its portfolio over the past 28 years to include 17 hotel properties including upscale, independent and brand-affiliated hotels, eight restaurants and two commercial properties. LHM has acquired and repositioned such iconic hotels and real estate as the Hilton at the Ballpark which features Three Sixty, one of the 10 Best Rooftop Bars in the World; Union Station which features a popular holiday train ride and the award-winning 3-D light show in the Grand Hall; and The Cheshire Hotel, which includes the new restaurant Boundary, as well as dining spots Basso, The Fox and Hounds Tavern and Starbucks.