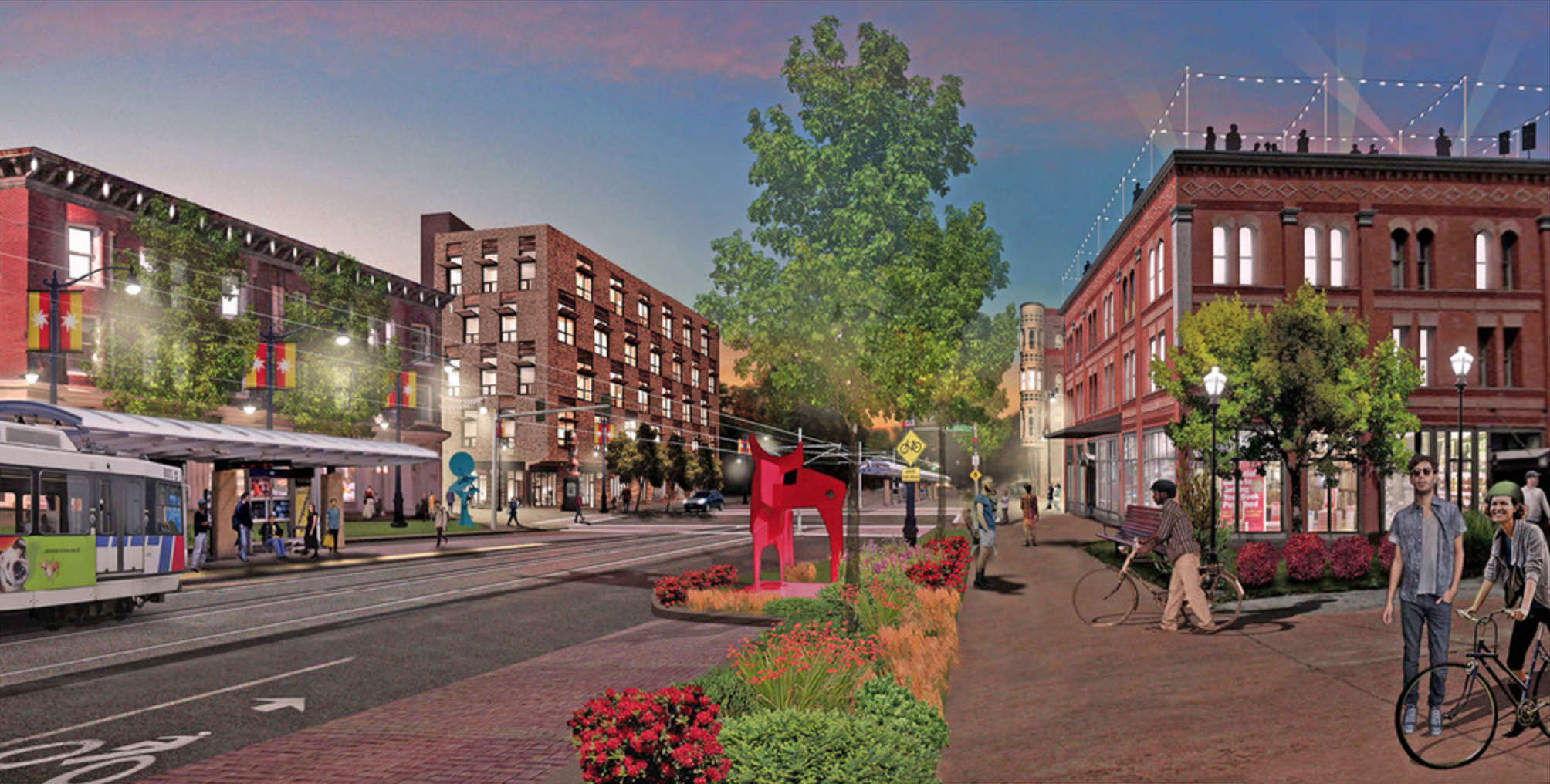 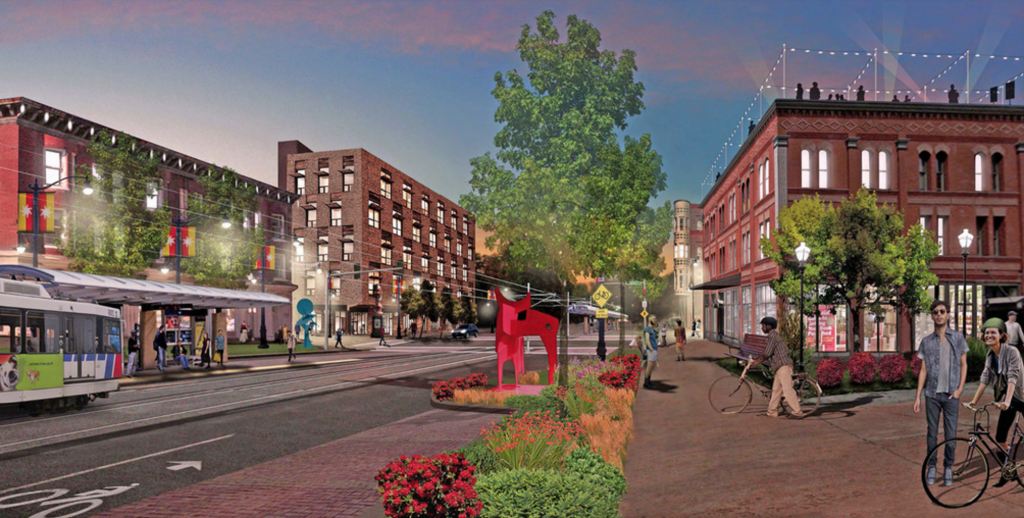 Fixating on the issue that a north-south line would likely use a different technology than existing heavy rail MetroLink, Stenger states, “Transportation should not divide us. A light rail decision that would further fragment our region is not in our best interests.” This is a logically torturous, myopic, and simply wrong view of the function of transit.

One of the more interesting moves by Mayor Slay in recent weeks has been his vocal support for a north-south running light rail line that would traverse the city and reach north and south St. Louis County.

The push seemed to dovetail with the National Geospatial Intelligence Agency’s selection of north St. Louis for its new $1.75B headquarters, and the mayor, who recently announced he will not run for a fifth term, appeared freed to push for a bigger vision.

Stenger supported the city’s NGA bid, over the St. Clair County, IL site, but also ahead of two sites in St. Louis County that had made the final cut of four considered locations. It appears that cooperation will only go so far.

It seems so basic as to be painful to state, but a transit system of varied modes and services is exactly what smart regions seek. It’s the network of varied busses, rail, bike lanes, and more that comprise a transit system. In Boston, the Silver Line hybrid BRT doesn’t run on “T” lines. Other buses can’t run on the Silver Line. The ferries in Boston Harbor can’t use bike lanes, and cyclists aren’t allowed to pedal on rails.

The assertion that a north-south rail line would act to divide the region is preposterous. Not only would the line connect the most densely populated and traveled parts of our region, it would catalyze more development than other options. One needs to only look at the car dealerships springing up adjacent to the $500M Blue Line to see the folly of rail expansion in St. Louis County.

So what in the hell is Stenger thinking? He’s playing the classic role of political “leader” in our fractured region. He hangs his argument on representing “more than one million citizens” and St. Louis County being the largest local funder of Bi-State. In short, it’s ours-ours-ours and who cares about what a transit system is, or how it could affect the region. In that respect, his opposition is somewhat predictable, and yet still absurd.

Leaving other arguments alone, a north-south rail line reaching, and likely extending into, north and south St. Louis County, is by far the wisest transit investment for the county. While central and west county are economically successful, increasing poverty, declining jobs (and so access to jobs) both north and south present massive challenges. Connecting these areas to jobs and education, preventing economic decline, is the challenge of the coming decade.

Slay and others are seeking a $500K grant to fund a Transit Oriented Development (TOD) study, an important step toward development of a full funding model for the project. Sen. Claire McCaskill and Sen. Roy Blunt sent supporting letters, and joining Slay in signing the regional letter of support to the Federal Transportation Administration (FTA), were the following:

In the decade since the 2006 opening of the Blue Line, the next rail extension has been widely studied, contemplated, and debated. The Loop Trolley not withstanding, the region is on the verge of a 20 year gap between light rail expansion, a time period that puts it well behind other places.

While MetroLink in the St. Louis region largely functions as commuter rail, the vision of a more urban rail line has received significant attention. Back in 2007, the East West Gateway Council of Governments, the region’s metropolitan planning organization (MPO) studied and selected a locally-preferred alternative for a future north-south rail line.

A potential route for the north-south rail line: 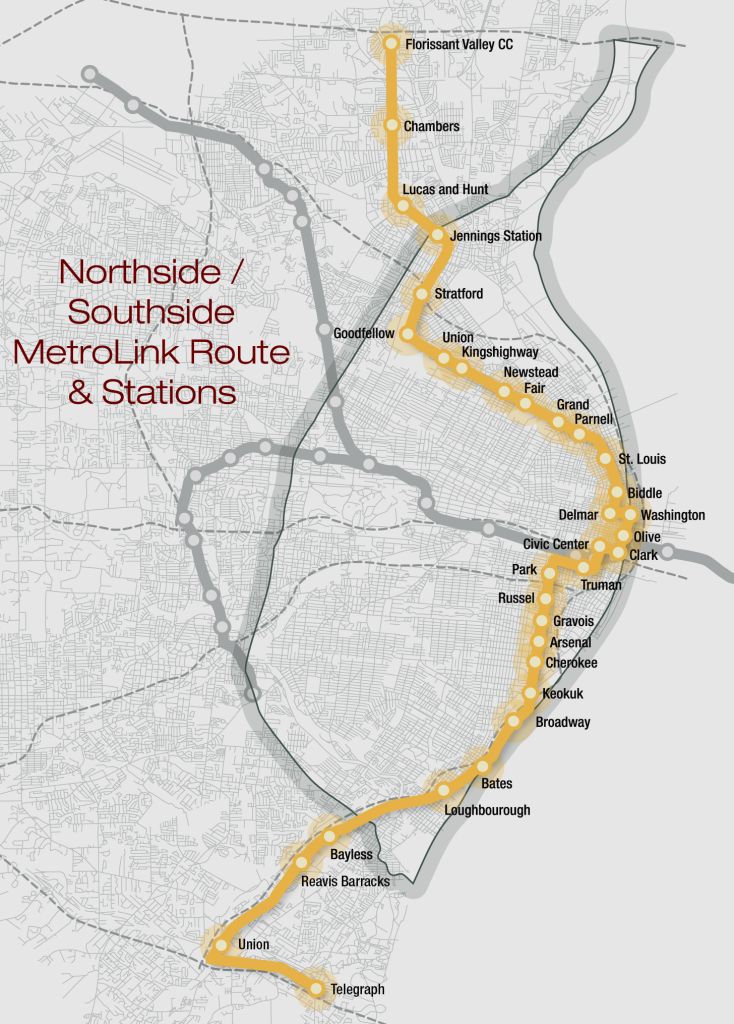 That study and any extension plans floundered for years. Then, in 2010, St. Louis County voters overwhelmingly approved a 0.5% sales tax increase to fund transit system operations and expansion. That vote put a 0.25% sales tax increase passed years ago by St. Louis City voters in effect as well. Stenger believes that because more local funding comes from the county, any light rail extension should be considered there first.

The issue of expanding light rail is quickly becoming the absolute essence of how St. Louis harms itself. What divides us is the lack of regional leadership, and its failure to understand none of us live within our municipal confines. The rest of the nation and world also do not care about our political divisions.

While not offering absolute opposition, Stenger is opposing the FTA grant application and other efforts, “until a thorough analysis of all possible routes is completed.” By this, he largely means a MetroLink extension to Westport.

Last year, Stenger announced that $1M from the county’s transit funding stream would be spent to study MetroLink expansion in St. Louis County. Officially, the routes to be studied include, Clayton to West Port, Lambert to Florissant in North County, and Shrewsbury to Butler Hill Road in South County. There has been no progress to date, and Stenger’s letter dated June 15, 2016 states the county “is about to proceed with feasibility studies.”

The north-south rail push by Slay, and Stenger’s opposition, would appear to be a blow against the St. Louis Streetcar effort, which studied an east-west line from the city’s Central West End to downtown.

In 2010, Metro engaged in Moving Transit Forward, a public planning exercise meant to gauge political and public opinion for transit expansion and lay the ground work for future work. That process identified the county lines Stenger says he will study, and the north-south line identified by East West Gateway as the locally preferred alternative in 2007.

In 2014, a preliminary Transportation Oriented Development study was completed for a possible north-south rail line. That study was funded by a grant as part of the OneSTL initiative. Now in 2016, we continue to argue about which lines could be further studied.

What Scott Ogilvie, 24th Ward Alderman for the City of St. Louis wrote on nextSTL at the end of 2014 remains true: “We’ve been here before – there were steeper hills to climb before the first MetroLink line was built. But 20 years from today, we’ll look at the Northside/Southside route as the most essential part of the system. It will be difficult to imagine St. Louis without it. Lets get started.” 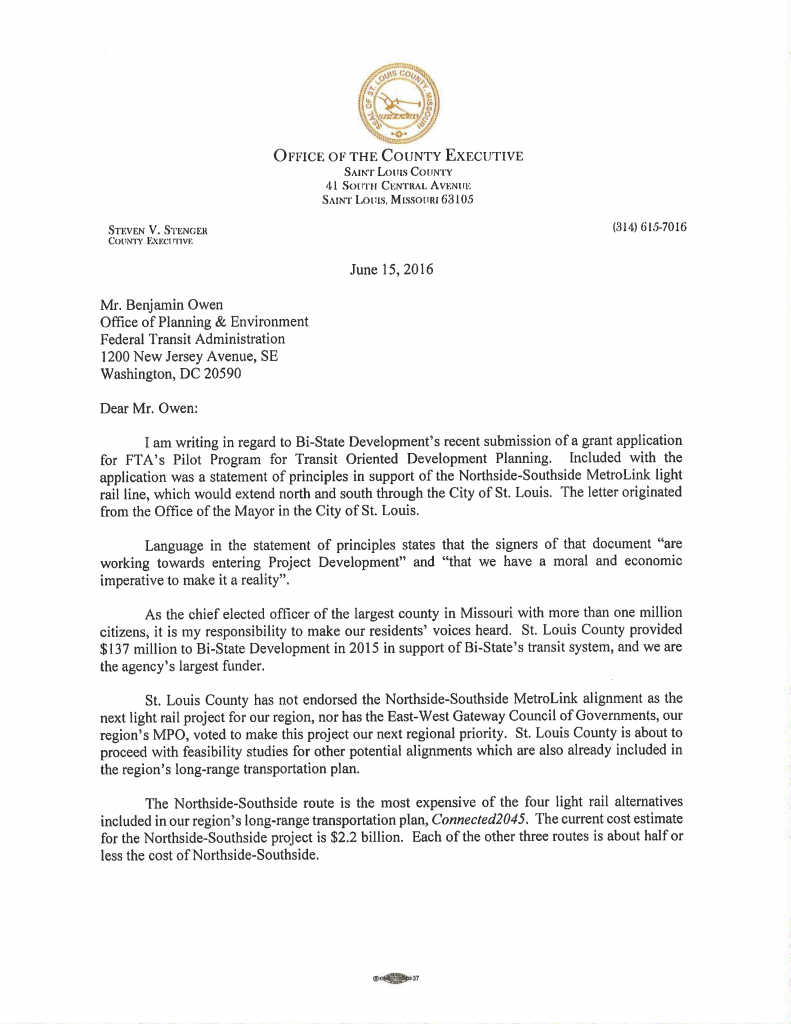 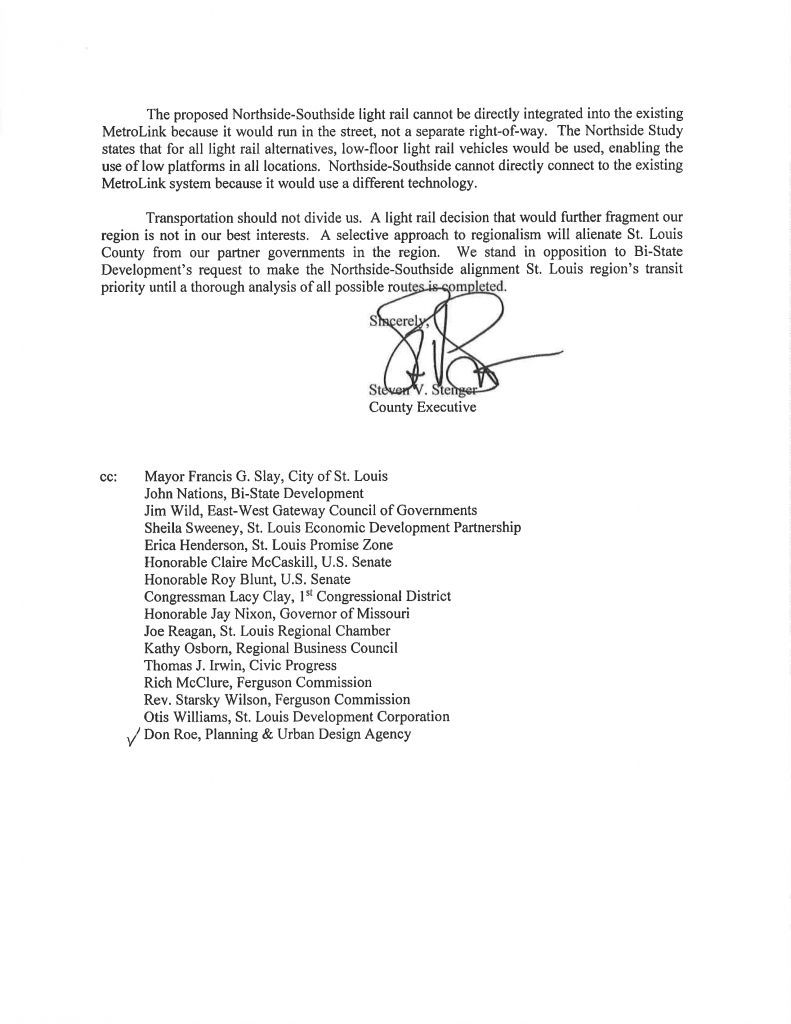 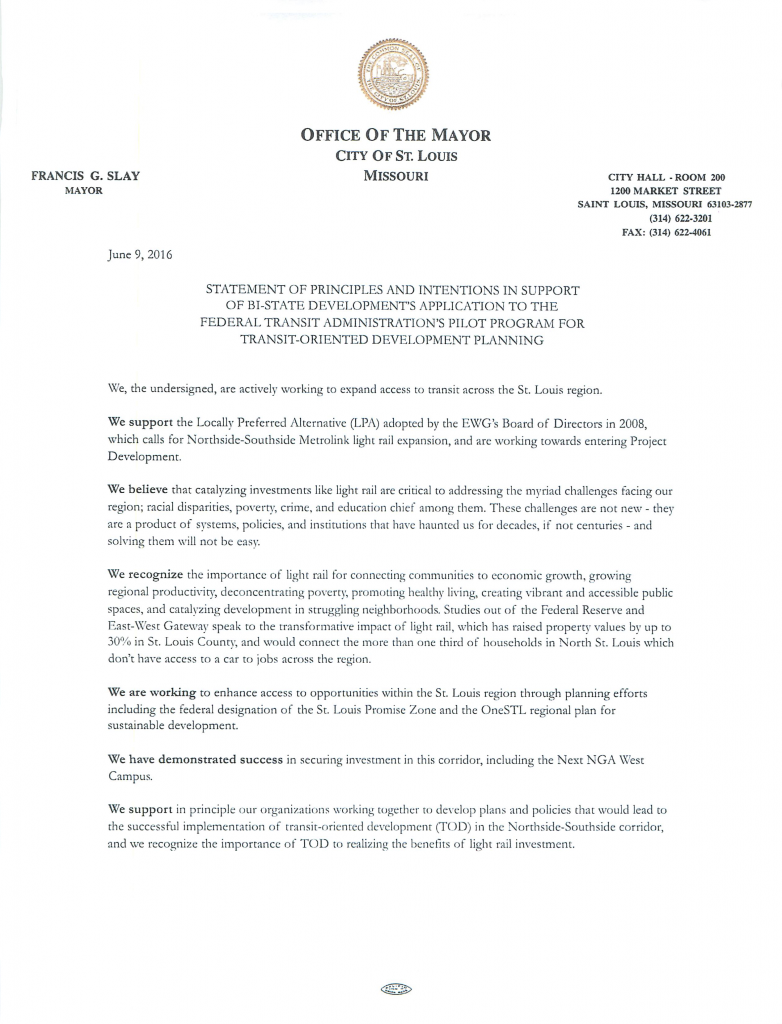 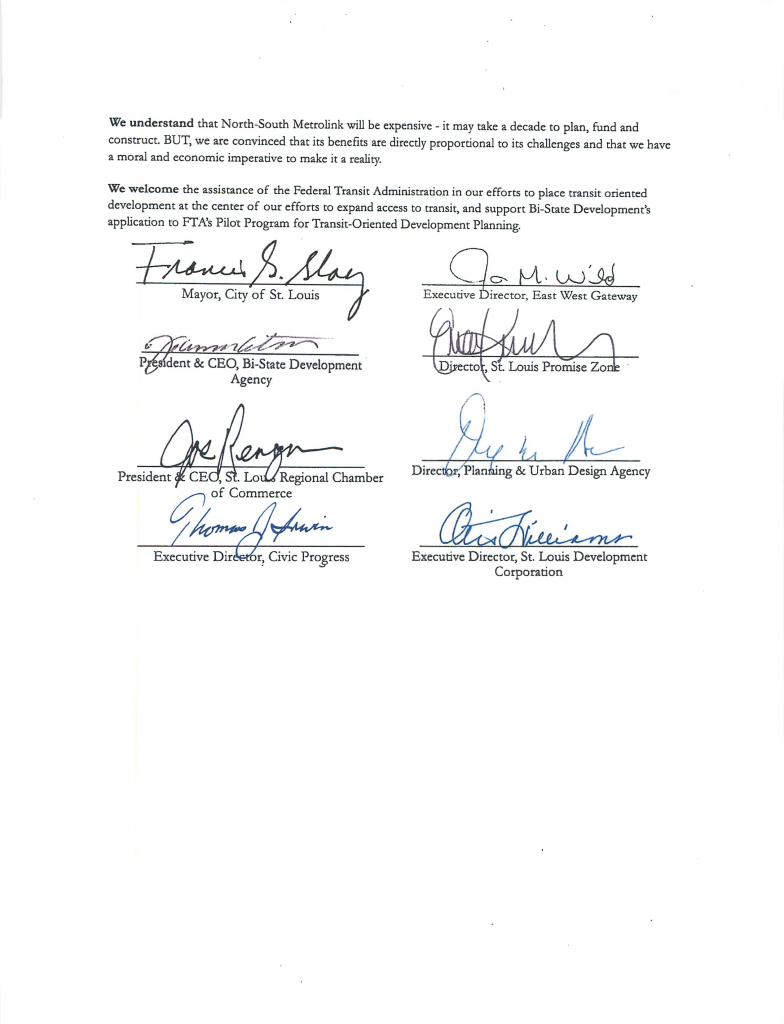 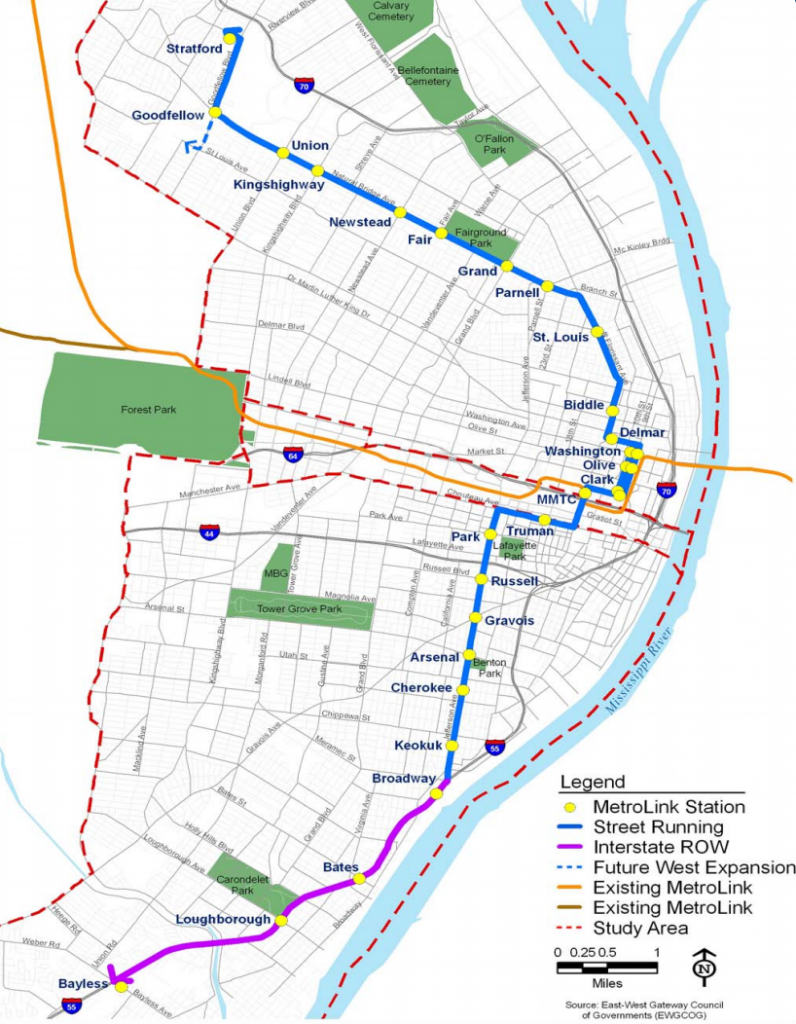 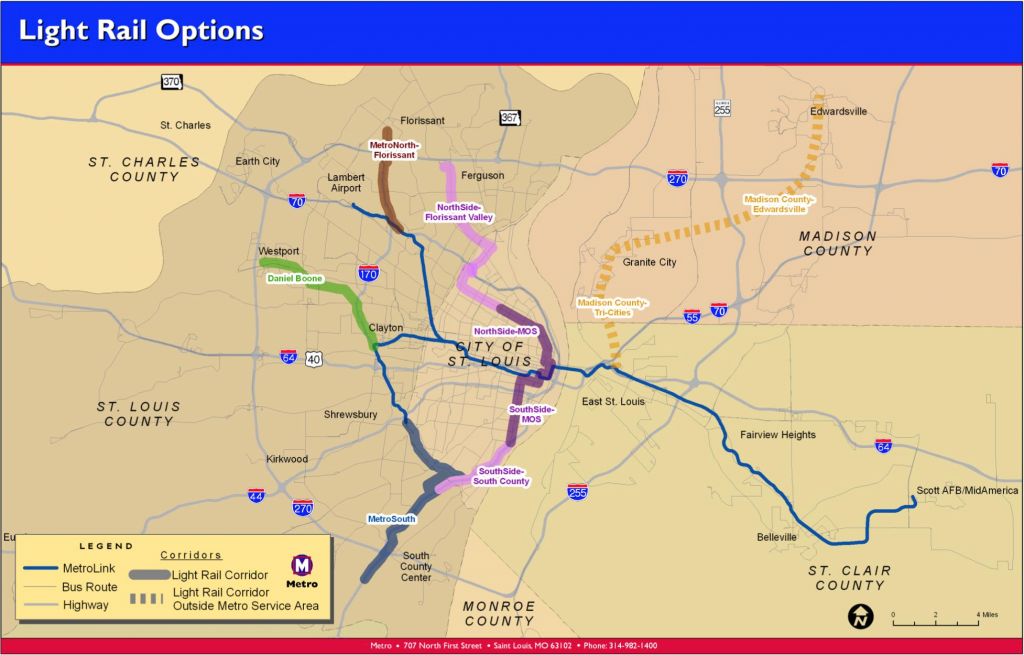 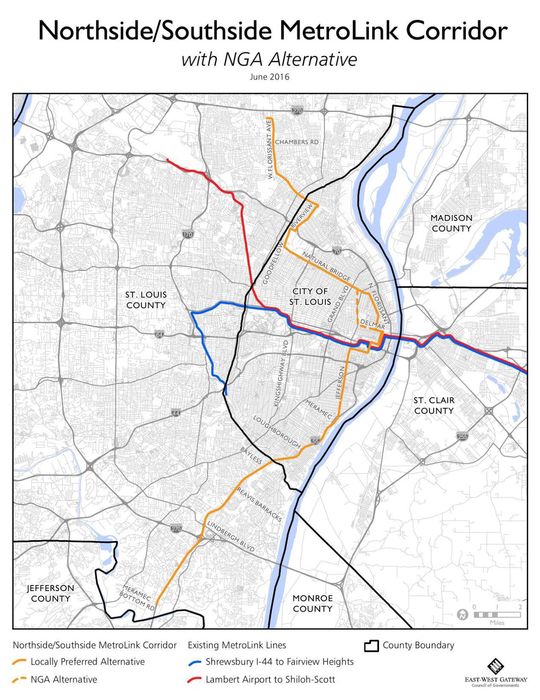