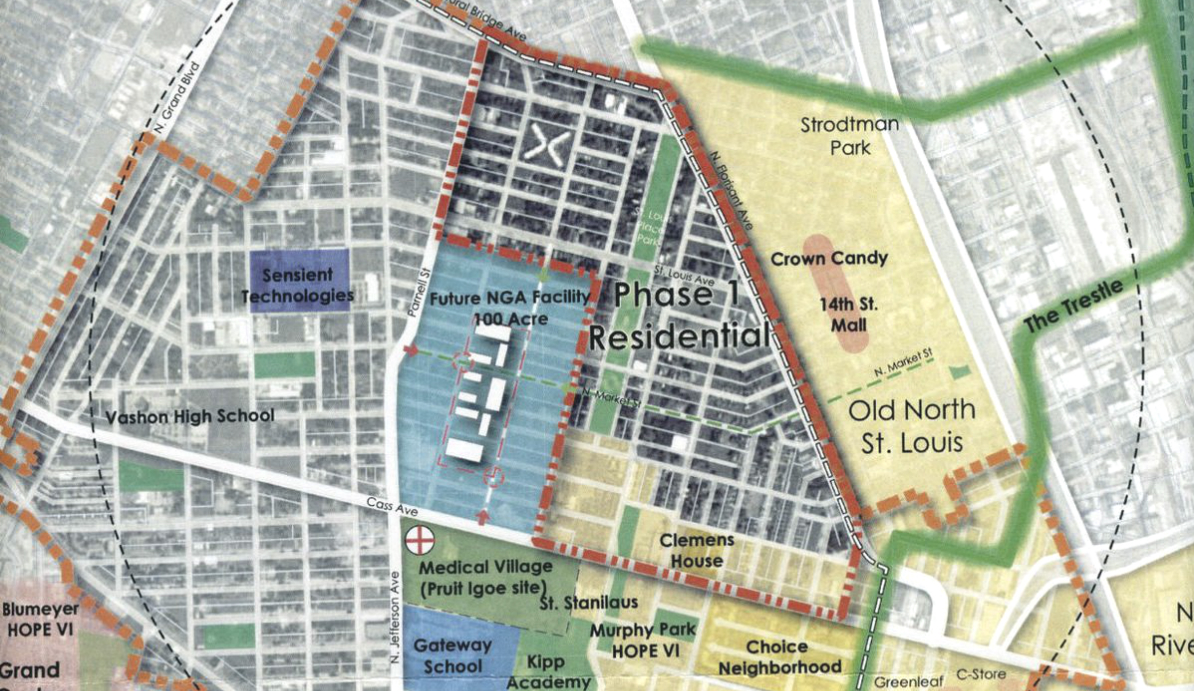 The dream of NorthSide is over. Let’s first admit that. The promises did not and will not come to pass. Perhaps the vision sold was always a bit of a stake in the ground, more aspirational than attainable. But that’s soon becoming beside the point.

The new news is that on the heels of the $1.75B NGA announcement, Paul McKee has announced the construction of 500 housing units. McKee will partner with Telesis Corp. of Washington D.C., Clayco Realty Group and the AFL-CIO Housing Investment Trust. According to NorthSide, Calthorpe Associates is also a project partner. Construction in the St. Louis Place neighborhood is said to begin next year and be completed by 2022. 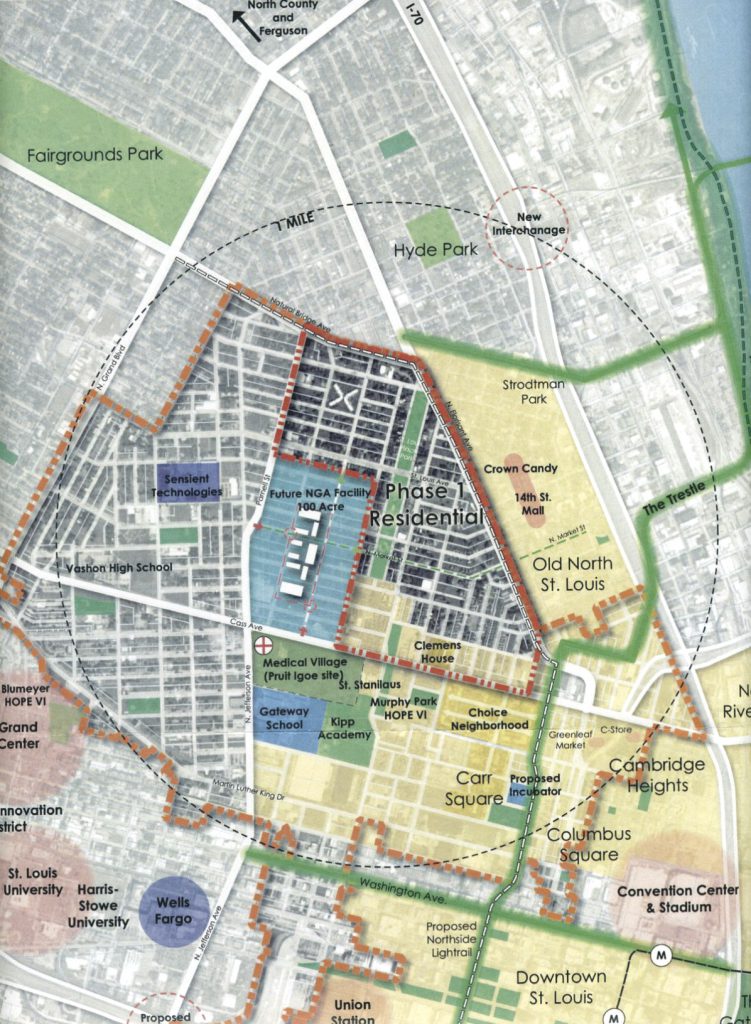 National AFL-CIO president Richard Trumpka endorsed the North St. Louis site back in August of 2015. At about that time, McKee stated he planned 235 homes east of the then proposed NGA site. That statement, following many others, was met largely with a shrug.

With Telisis, McKee may have finally found a partner willing and able to build. Working with the local knowledge of CRG, and the funding of the AFL-CIO, there are fewer reasons now than ever that this plan shouldn’t move forward. Still, it’s not possible to completely put away the skepticism. Fool me once, shame on me, fool me two dozen times, shame on NorthSide – or so we say in St. Louis.

Anyway, it’s not exactly clear when NorthSide died. It could have been when the Great Recession began in late 2007. It could have been sometime from 2009-2013 as a lawsuit against the almost $400M Tax Increment Financing (TIF) package wound its way through the courts (McKee would eventually prevail). It could have been when a Dollar General store couldn’t get off the ground, or when NorthSide refused to identify the “legacy” properties it was going to save, or when the roof of the chapel at the Clemens Mansion collapsed, or when The St. Louis Brewery passed on the area, or between one of the new logos and rebranding efforts, or when modest plans for the Bottle District came and went, or when McKee lost properties to creditors, or when a heavily subsidized suburban gas station and grocery were announced for Tucker at 13th Street, or even when the final final NGA announcement came just last week.

The phrase “the king is dead, long live the king” is meant to mark the transfer of sovereignty from one monarch to another. And so NorthSide as we knew it has passed and NorthSide as we will know it is alive and well.

It doesn’t serve any great purpose to dwell on unfulfilled promises, so I’ll be relatively brief: the 1,500-acre redevelopment area was to have three major employment hubs (each more dense than the NGA) totaling more than 4.5M sf of offices and 1M sf of retail and entertainment space. All that activity was to be centered on the vacant Pruitt-Igoe site.

More than 2,000 single-family homes, as many as 7,800 apartments were to be built, and 3,900 existing residential units were to be retained or renovated. A separate, green, water supply and sanitary system was envisioned, as well as sustainable energy sources such as wind and solar. There was to be a robust greenway network, bike lanes, pocket parks, and other transit – it was city-building at its finest. Total investment in the area was tagged at more than $8B. Oh, and the use of eminent domain was not to be allowed. But we knew and know that cities aren’t built that way, right?

Now we move on. NorthSide is very much alive.

At the time of the TIF application, fully 38% of the 1,500-acre redevelopment area was vacant land. Another 6% was comprised of vacant buildings. This is changing fast. The center of vacancy is to become the 99-acre NGA home. You can cross that off the official vacancy ledger.

The impact of the NGA’s $1.75B project is very real. And it’s beyond whatever a “normal” $1.75B investment would be. The NGA project is a 100-year investment. The agency won’t be acquired, or bought out. Its headquarters won’t move to Ireland to dodge taxes, or scoot to Chicago for better air connections. Its 3,000, or 4,000, or however many employees, will be well paid. They’ll be St. Louisans. The project should break ground next year and be completed by 2023.

Beyond the project itself, which again, is massive, the NGA puts an anchor, OK, some walls, up in north city, helping to define development districts. The announcement is likely to set other developments in motion. It’s big, and along with the NFL Rams leaving St. Louis, provides predictability, answering the two biggest St. Louis development questions of the decade.

We can’t and shouldn’t discuss this development without recognizing that eminent domain is being used. Homes are being taken away from owners. Others aren’t legally being forced out, but are selling under the threat of eminent domain. The scale of displacement is an order of magnitude less than St. Louis’s Urban Renewal past, but the trauma to the individuals is the same.

And so NorthSide is very much alive. The NGA announcement has clearly given St. Louis City Mayor Francis Slay the hook needed to aggressively push for a north-south light rail line in the city. Investment follows investment, and perhaps federal investment follows federal investment. The transit expansion has enjoyed local support for years. A corridor study has sat on the shelf for a full eight years. Perhaps the NGA tips the scales in its favor.

The NGA project itself is expected to create 15,000 temporary construction jobs. More construction should follow, keeping the various trades busy, and likely bringing new jobs to the city over a period of years. And a light rail line? That’s another couple thousand jobs. The construction jobs can’t continue indefinitely, but what if along the way a city is rebuilt? This is what again seems possible.

The good news is that now the development we had hoped for is here, we can argue about site plans, building design and subsidies. That’s not always a happy place to be, but it’s much better than having nothing of value to contest.

So what will we be arguing about? At the south end of NorthSide, the 22nd Street I-64/40 interchange will soon be remade, with infill development planned adjacent to Union Station. It will be good and bad, but mostly good. To the east, any news at the Bottle District awaits a reported $300M hoped for investment at the city’s convention center.

The NGA plan itself will come together and slowly be revealed. The impact of public input on the highly secure facility? Perhaps not much. Further study of the north-south rail line will take place and we’ll debate Florissant, Jefferson, Chouteau, and Gravois alignments.

Infill housing will, especially at first, be underwhelming, but still positive. The north side does already have some good modest infill with Habitat homes and others. We’ll celebrate some historic renovations and continue to wait for any news of Carr School and the Clemens Mansion.

The infill at Pruitt-Igoe won’t do the site justice, but construction at the site will be welcome. And we’ll wonder why Tucker, our city’s new front door, continues to be treated like a back door, like our city’s other front doors.

But these things are good, or at least better. NorthSide is dead, long live NorthSide.