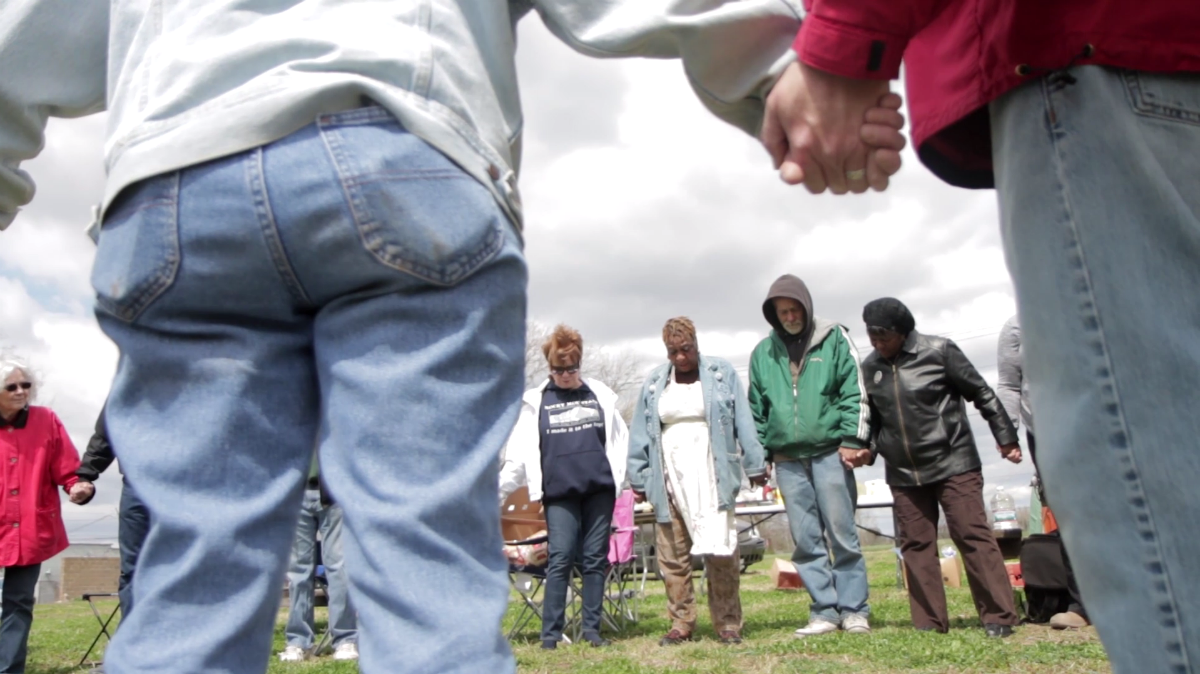 March 31 we learned that the National Geospatial Intelligence Agency had made the initial decision to build its new western headquarters in North St. Louis City. The final record of decision will come in early June. Despite continued protestations by supporters of a site in the Metro East, it is expected that the NGA will relocate from south St. Louis to the north city site. To assemble the 99-acre site, St. Louis is poised to use eminent domain to acquire the property of those who did not want to leave.

Exodus, a film by Jun Bae, a student of architecture and documentary filmmaking at Washington University in St. Louis, tells the story:

Read: Is There a City Without Empathy? by Michael Allen

More on the NGA, north city, and eminent domain:

The city puts its full weight and authority behind the effort to secure the $1.7B project, and the estimated 1,500 construction jobs and 3,100 permanent jobs. The 99-acre site north of the Pruitt-Igoe site, is comprised primarily of traditional narrow residential lots. In February, the city’s Board of Aldermen empowered the city’s Land Clearance Redevelopment Authority to employ eminent domain against as many of 160 parcels. Of those, 65 were categorized as vacant land, 41 as rental properties, and 57 as owner-occupied homes, churches, and businesses.

More than $1.6M was budgeted to compensate owners forced to relocated. With the power of eminent domain in hand, the city reach agreements with the majority of property owners. Following the statutory process, a circuit court judge appointed commissioners to arbitrate offers for 43 parcels. Offers range from $900 to $195,000.

The owner of the Buster Brown Blue Ribbon Shoe Factory was offered $810,000. Paul McKee had agreed to buy the building for $3.75M in 2011. The building’s owner is asking for $12M and wants the building moved across Jefferson Avenue and preserved. For Shiela Rendon, the final city offer was $133,000. The commissioners set the amount at $175,000. Rendon had reportedly asked for $500,000.

Select properties to be taken by eminent domain, and the commissioners offer: 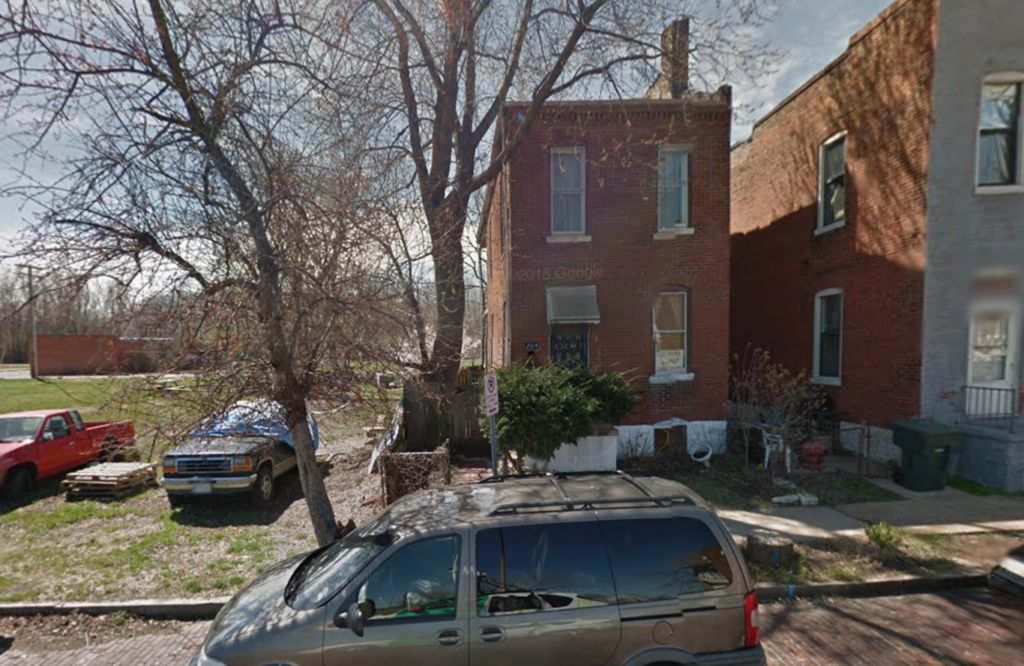 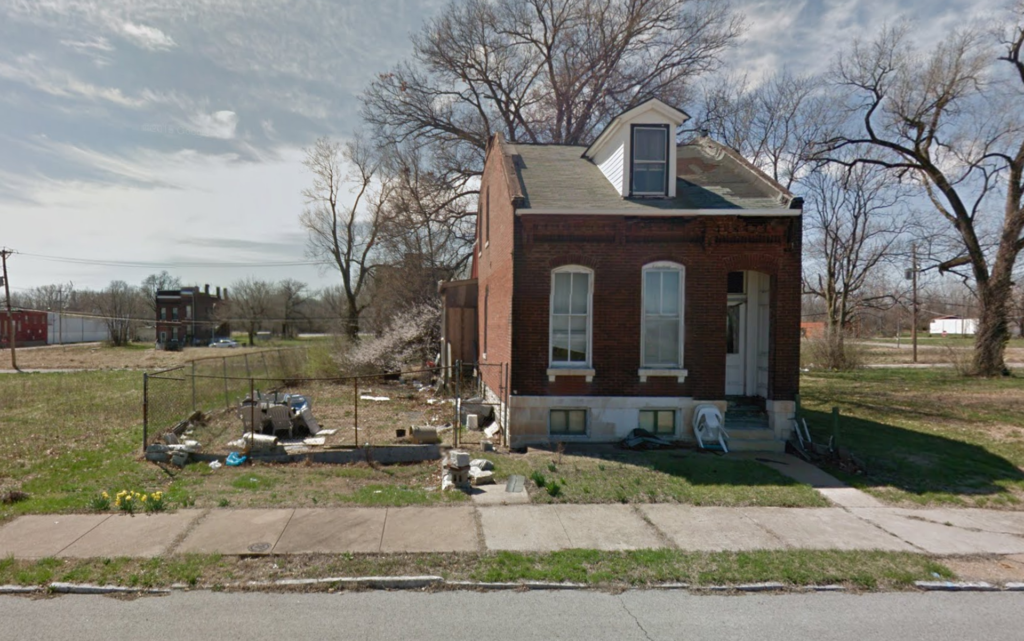 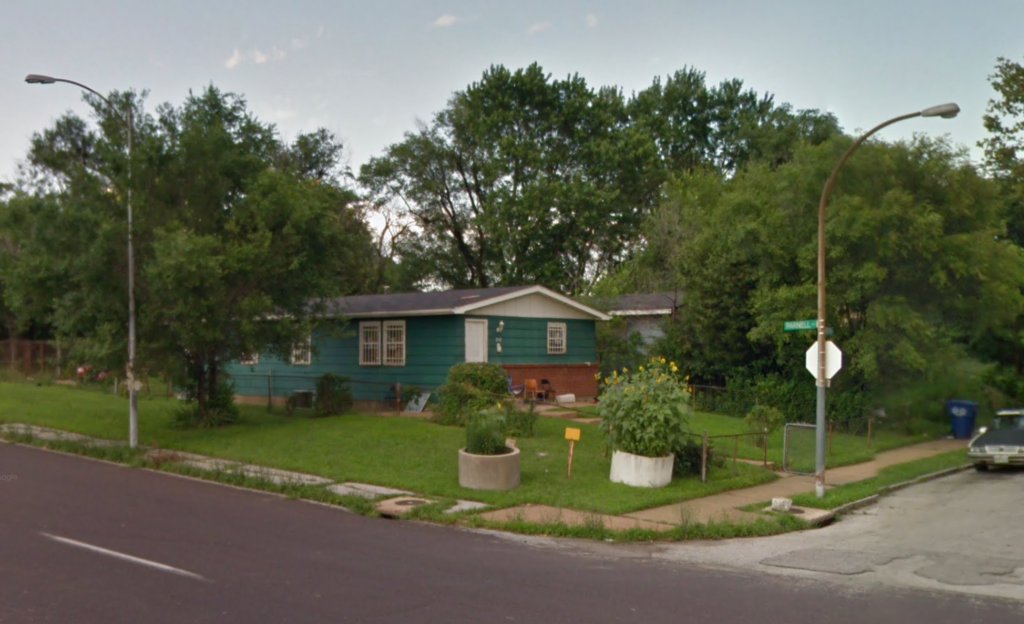 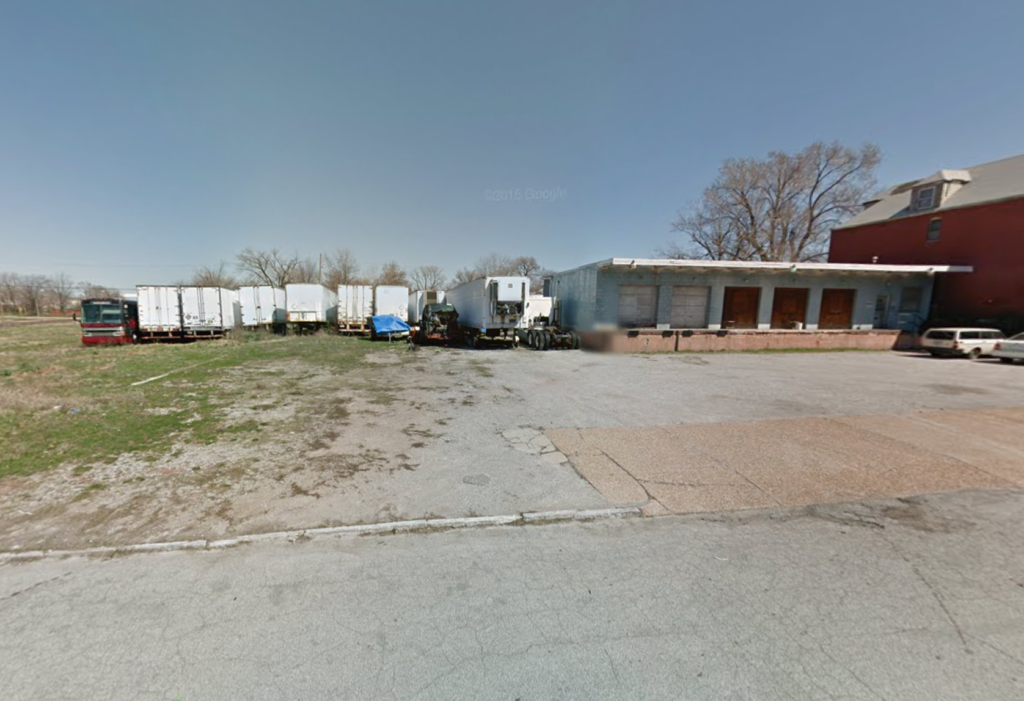 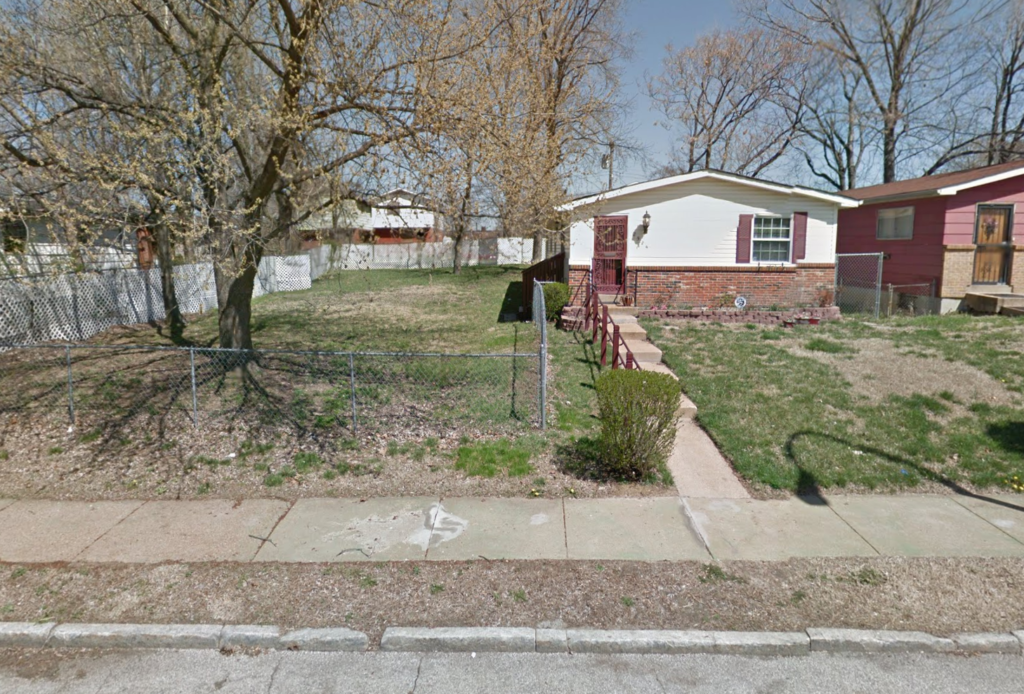 A vision of the planned NGA headquarters: 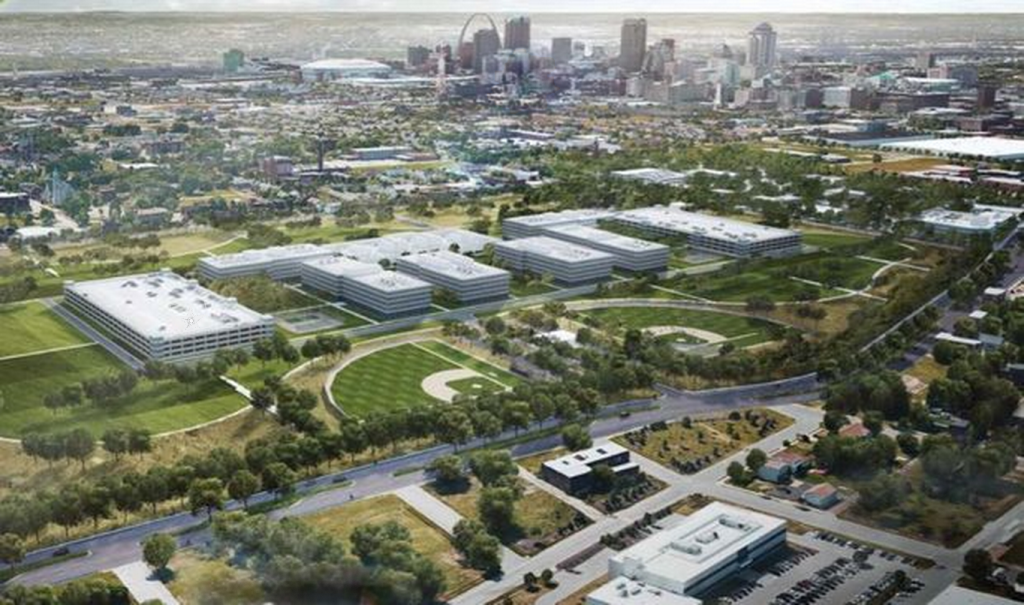 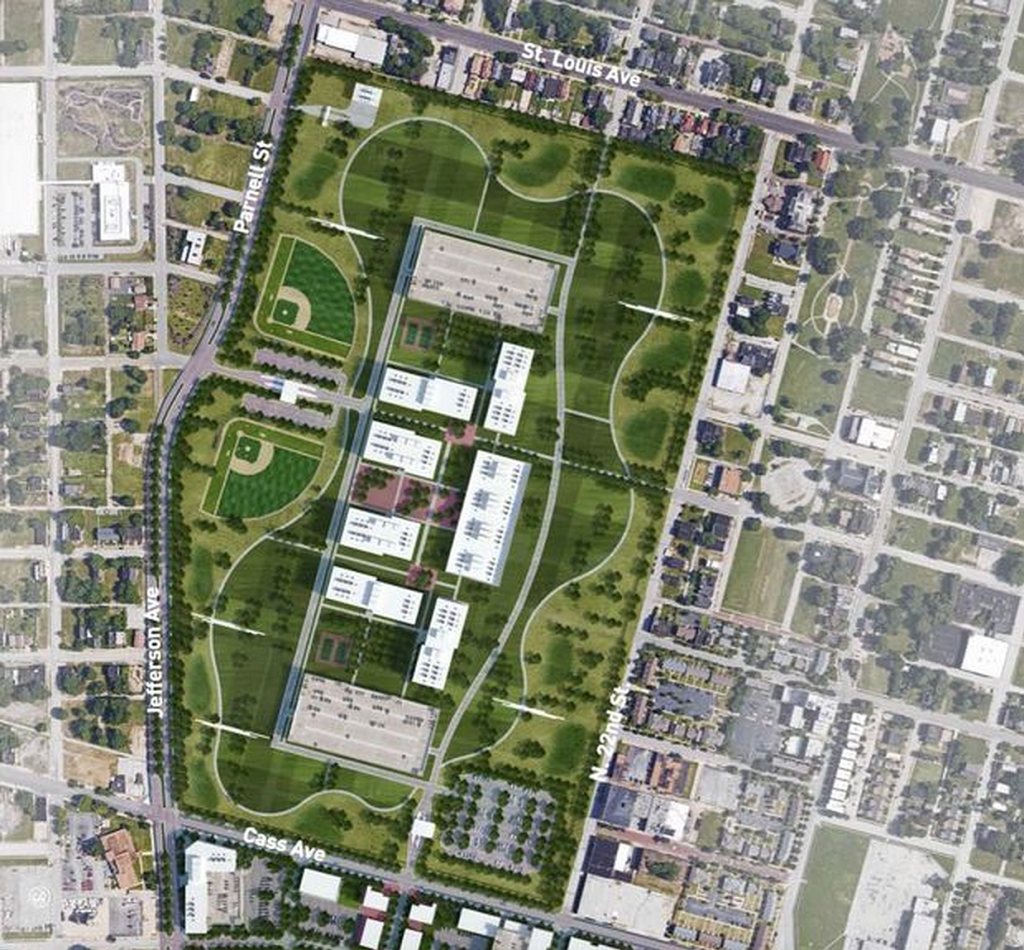 Excerpts from the Final NGA EIS:

In December 2015, Resolution Number 142-AA was passed to allow LCRA to acquire seven identified parcels through eminent domain if it is unable to reach an agreement of sale. The resolution also allows LCRA to acquire parcels through eminent domain that are currently under contract, if other circumstances delay purchase of a parcel. The resolution was passed in accordance with Section 8 of Ordinance 69977, which required that specific parcels be identified and approved by the Board of Alderman before LCRA took action.
….
As of December 2015, agreements of sale have been reached on 94 percent of the properties, with contracts signed on 30 percent of the properties (163 properties with 88 owners) and 64 percent pending signatures (351 properties with 3 owners) (Halliday, 2015d, pers. comm.). Of the remaining 6 percent of the properties where eminent domain is being considered, 1 percent have title issues (7 properties with 4 owners). The City is continuing negotiations with the remaining 5 percent of the property owners (30 properties with 15 owners) (Halliday, 2015d, pers. comm.).
….
This analysis finds that if the St. Louis City site is selected, the short-term impacts of relocation for residents and business would be borne by minority and low-income populations, but this impact is not high and adverse after considering several other factors, including the Missouri relocation statutes (Sections 523.200–215, RSMo, 2014), which also meet the requirements of the federal URA. Additionally, the Next NGA West Campus indirectly may provide a stabilizing effect and contribute some momentum toward enhancing the NorthSide community resources. These benefits may be realized by those being relocated, because the City’s intention is to relocate residents and businesses within the larger NorthSide Redevelopment Area, near other members of the community, business patrons, and within closer proximity of more abundant community services. Therefore, the NGA site alternative does not result in high and adverse effects on the health or environment that would be disproportionately borne by minority and low-income populations.