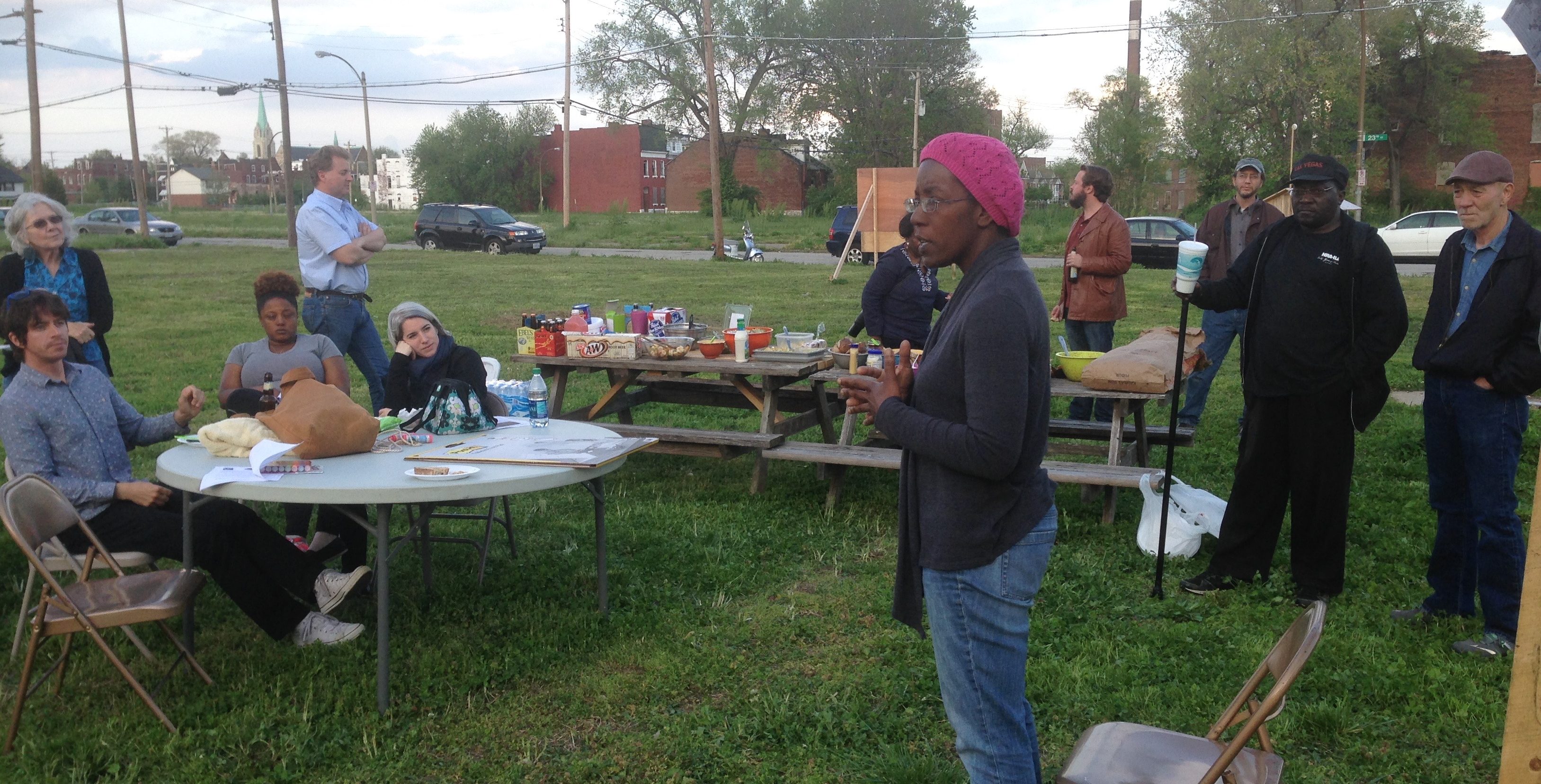 Late spring came to my front yard by drawing open the blooms of lilies, thriving with recent rain and heat. Early blossoms always inspire, although tinged with the likelihood of early exhaustion as well. Of course, lilies followed red buds, and after lilies come fruit like the apricots growing on trees across the street. Something is always presenting us with vivid change. The question is perception. Are we seeing the city – ecological, social, architectural? How are we looking? What are we looking at (or for)?

Emergent energy often assumes the form of confrontation, especially when its paths are blocked or its images are veiled. Such is the case with the people of Detroit, whose settlements and cultural images have been assiduously ignored and replaced in the feckless exhibition entitled “The Architectural Imagination” currently displayed within the U.S. Pavilion at the Venice Biennale. The exhibition is yet another constitution of the meme of the urban frontier – Detroit as cultural tabula rasa where only the agency of designers matters. Nevermind the dogged efforts of neighborhoods to persist through love and hope amid the bombardment of constantly-failing regimes of “emergency management.” Nevermind the political aspirations of the residents of Detroit. Nevermind hearts, minds, bodies and memories. The exhibition elevates the obtuse fantasies of people whose stakes in Detroit are subjective, identitarian and revanchist.

Contra the hackneyed Detropian display comes the digital occupation of the U.S. Pavilion by Detroit Resists. Acknowledging the primacy of perceptual space in the world of design, Detroit Resists has reclaimed the pavilion through a smartphone app and powerful catalog including writing from Grace Lee Boggs and other people long committed to nurturing Detroit. Through the app, the exclusionary politics of the exhibit are vanquished. Occupation is a street with multiple lanes, and no speed limit.

As Detroit Resists inspires us to acknowledge and cherish the people whose lives and deaths even allow designers to dream about a place called Detroit, St. Louis silently bears witness to the final strokes of evicting the residents of St. Louis Place for the putative new home of the National Geospatial Intelligence Agency’s St. Louis branch.

The calculus of expendability has long been exhausted here. St. Louis Place’s southwest quadrant has borne the stigmata of “ghetto,” “urban prairie,” “blighted” and other diminishing terms since the 1947 Comprehensive Plan deemed the area “blighted.” Of course, efforts to stabilize the culture of the neighborhood, protect the land ownership rights of owners and retain the area’s urban image were waged up until the point that the area became almost completely African-American. Then, each successive plan for the area has waged a tedious effort at complete erasure and expulsion of the residents. Acknowledging the racial dimension to the history is essential, because it fits St. Louis’ penchant for doing the same thing to city neighborhoods like Mill Creek Valley and Compton Hill and suburban neighborhoods like Kirkwood’s Meachum Park and Richmond Heights’ Hadley Township.

The narratives that advance clearance and eviction diverge but usually carry themes of economic emergency: tax dollars are at stake because land is not producing enough revenue; jobs need to be created; substandard housing is a burden to the state. Rarely do these narratives evoke any sense of the humanity of place, or of the value of indeterminacy in the urban form that gets lauded elsewhere (“keep it weird” counterculture, “innovation” districts, “do it yourself” rehab communities – sanctioned unruliness is recuperated into mainstream political consensus). St. Louis Place, with a population density greater than Ladue, is supposed to be “empty.”

The neighborhood’s residents, which include families who have paid taxes on the same houses for a half-century, are supposedly more prone to undesirable traits. The open land, where buildings once stood, is used to justify narratives of intervention against the narratives of “playful” experiments with vacant land elsewhere. Contradiction abounds, perhaps because politicians and officials cannot openly state that they don’t really care about the human rights of residents whose lives impede investment that serves agendas of statecraft, urban real estate capital absorption and nearly-theological belief that land has greater extramonetary value than people.

Of course, there are utilitarian counter-arguments that do make sense: this site does the least harm, if the NGA has to be located in the city; the city cannot afford to lose the earnings tax revenue of the employees; the NGA needs an urban location to lure hotshot millennial image analysts. These claims are sensible after certain unstated assumptions have been made. The first and central assumption is that a city can accept a hierarchy in valuing the housing and ownership rights of its citizens. Second is that a population that has been fed contradictory agendas for its land – some threatening, and some promising like Paul J. McKee Jr.’s 2009 master plan which did not threaten land rights here – has no right to redress.

News reports focus on the condemnation process and the value of land, but the missing reparation is compensation for extra-economic suffering. The residents of St. Louis Place have a temporal suffering borne by the failure of their own government to protect their rights to healthy lives, their rights to own the homes for which they pay land taxes, and their rights to know the fate of their own land. Too often we measure the worth of this city in money, when we know that the real value of a historic place comes through time. We only know cultural value in time. We only know human lives in time. Anxiety – the fear instilled by contradictory messages from the state – is temporal. Without time, neither St. Louis Place nor the Old Courthouse nor even the Gateway Arch has weighted cultural value.

At the conclusion of the well-respected documentary The Pruitt-Igoe Myth, the narrator intones: “The next time the city changes, remember Pruitt-Igoe.” St. Louisans should take heed. When elected officials offer the postulation that placing NGA in St. Louis Place is redress for the federal government’s handling of Pruitt-Igoe’s decline, they ignore the humanity of Pruitt-Igoe. What made Pruitt-Igoe a hellish experience was not the architecture, nor the feuds between levels of government, but the suffering of people. Forcing the suffering of more people, however supposedly low the number, perpetuates the raw legacy of Pruitt-Igoe – it does not repair.

By now, many households have left the land, and Grace Baptist Church on Cass Avenue is shuttered. The little church founded by Pruitt-Igoe resident Reverend Joel Kelly Davis was a last living link to significant urban history – and a gathering place in an urban area that lost so many others. Time provided value, since the church gathered faithful in the same place for fifty years. No jury-awarded money can compensate the loss of the church in that location. Perhaps it is only right that Reverend Davis passed away two weeks ago at the age of 101. The world that he loved is gone.

The world that Grace Baptist Church sustained was never visible in the aerial views that the St. Louis Post-Dispatch published to “show” readers where NGA was proposed. Again, the eyes of the city sometimes only see what they seek. Aerial views preclude empathy, which is essential to St. Louis’ future. Definitions of “empathy” often present the identification of the self in the other – a seeing that creates a oneness. That oneness is essential for love. If we don’t look into each other’s eyes, we avoid empathy. A city of disconnected people, who don’t see each other in each other, seems hardly a city at all. 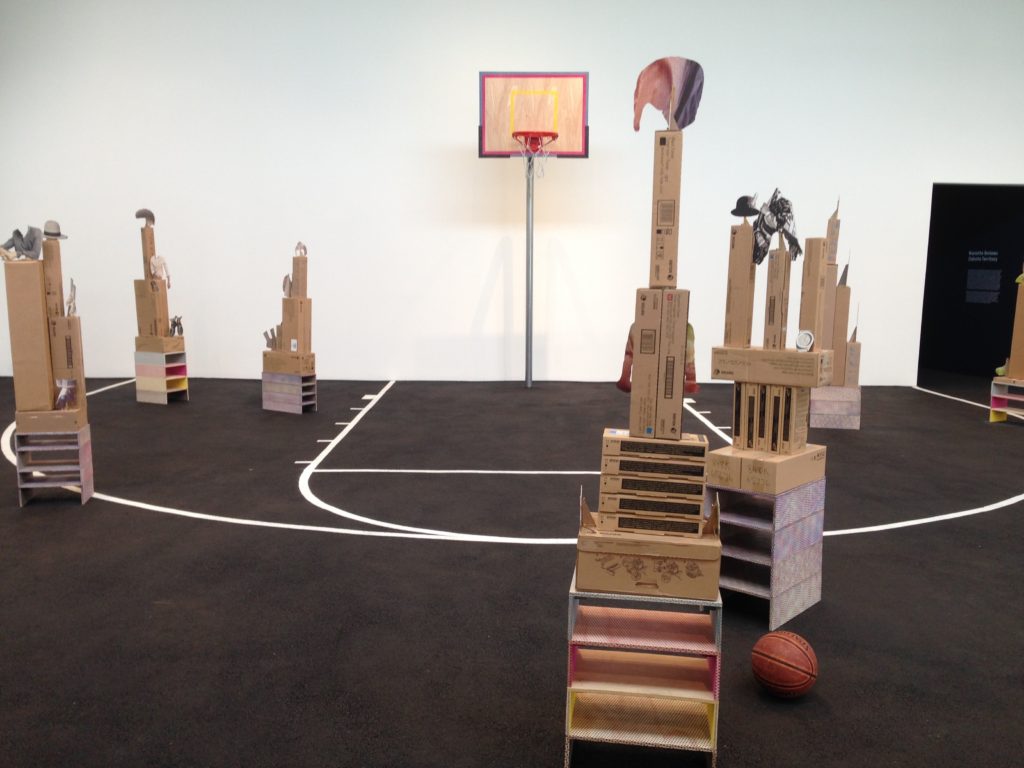 “Of Color” by artist Lyndon Barrois, Jr. explores the public space created by perception of difference

Visibility and identity are tautly explored by artist Lyndon Barrois, Jr. in his installation Of Color, currently at the Contemporary Art Museum in the Great Rivers Biennial. Barrois’ arresting basketball court, built with real asphalt, could well be the small court on Montgomery Street that the NGA plan will fall. The installation’s cardboard totems raise questions of the visible and the political implications of sight. Do we really not see people? What happens when what we profess to not see stands in plain sight? Recession is a matter of selection. St. Louis Place is only an unknown, strange land to anyone who has not walked its streets. Of Color has a timely presence in a city grappling with empathy.

Who knows where the residents of St. Louis Place will go. Each time the city has cleared a neighborhood before, it has lost residents. Literally, as St. Louis has cleared neighborhoods, it has lost more of itself. Residents threatened in time may end up feeling that the state has informed them that they do not belong in the city of shiny new projects, millennial tech whizzes and selectively-sanctioned “weirdness.” As artist Roberto Bedoya wrote, “before you have places of belonging, you must feel you belong.” Perhaps someday, we will find a way to “occupy” the NGA site and other lost neighborhoods, to assert that the people who made their lives there don’t just belong to St. Louis but are St. Louis.