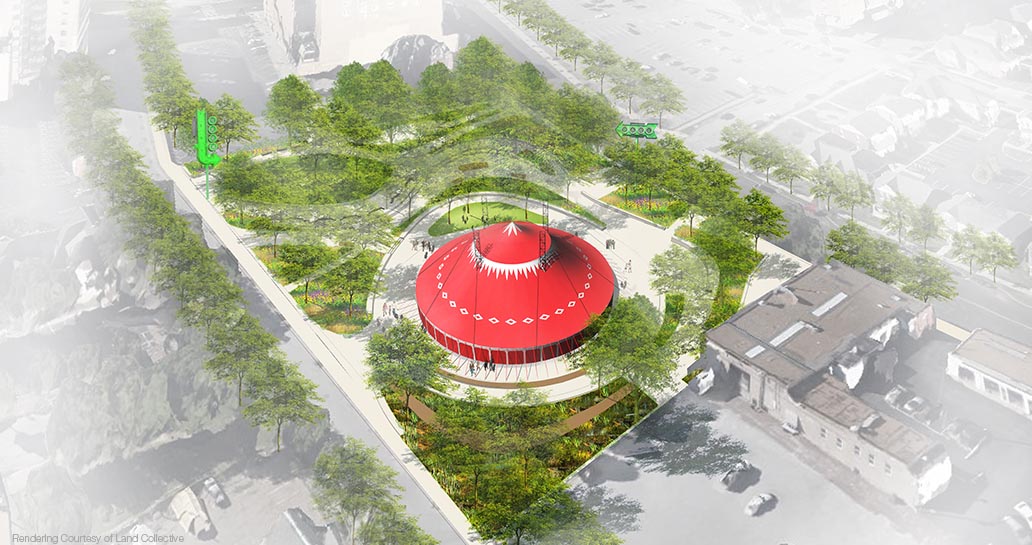 Circus Flora is raising its tent in Grand Center. Opening night is just 15 days away. When spectators enter the big top, they will be celebrating the 30th year of the production that aims to meld the traditional European circus with elements of contemporary entertainment.

The tent sits in the middle of a couple acres of asphalt. If all goes according to design, the annual production will soon have a permanent custom designed home. The Grand Center Performance Green by Forum Studio of St. Louis and LAND COLLECTIVE in Philadelphia would transform the surface parking lot into an outdoor home for arts and community events. 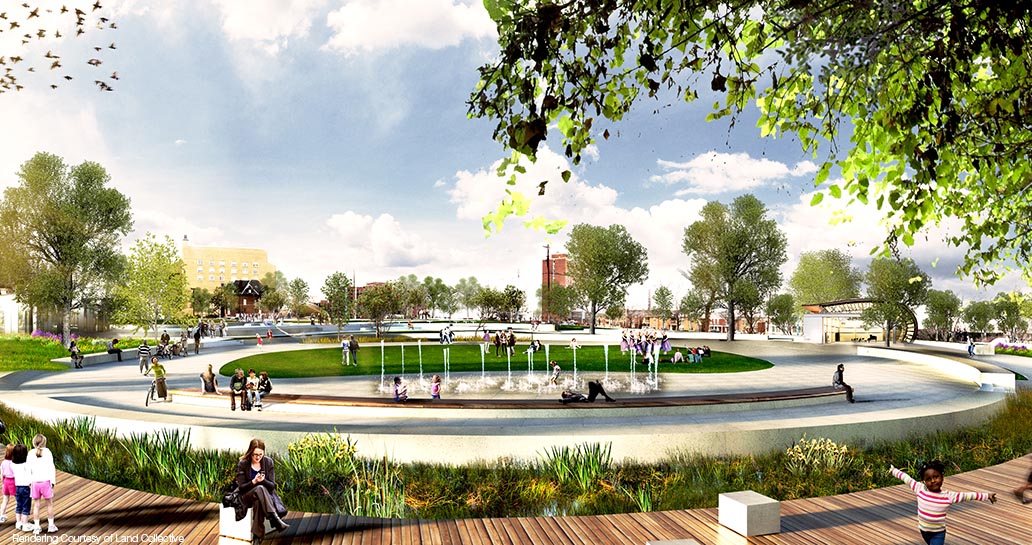 Specifically designed with providing infrastructure and a world-class setting for Circus Flora’s big top, the Performance Green will also accommodate other community and arts activities. It is conceived as a space for a farmer’s market, ice skating, a cafe, art festivals, and other creative endeavors.

The central green is measured to accommodate the big top for the one-ring circus. The tent holds seating 1,150 people, all seated less than 50 feet from the performance. Terraced seating, sweeping walkways, and sculpted entry paths create a true world-class setting for Circus Flora. 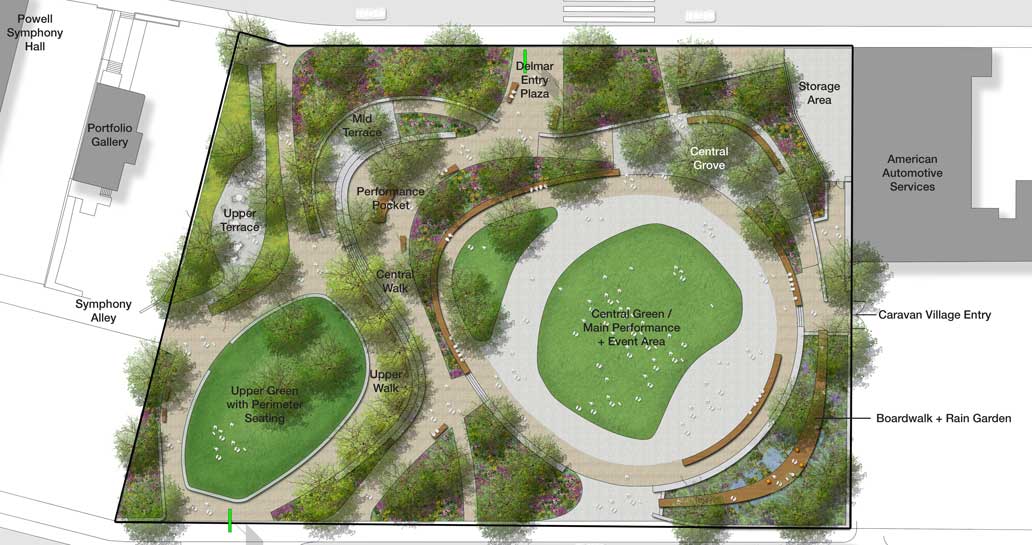 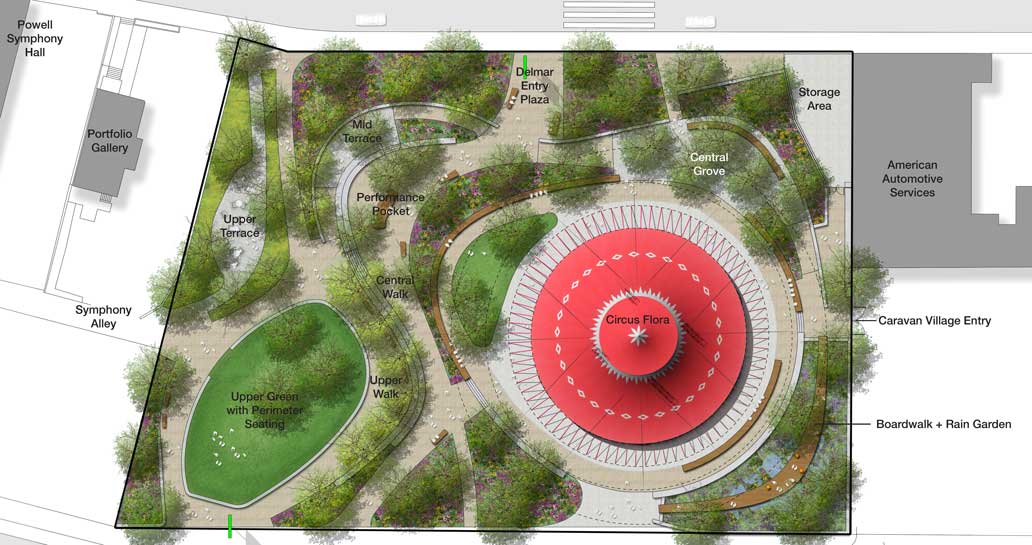 The details look great, but the one design element that is really brilliant and must make the final project cut is the repurposing of the garish, tired, and great Grand Center “PARK” signs. The repurposing and redefinition of these signs, long artfully highlighting where to put your car, is just perfect. 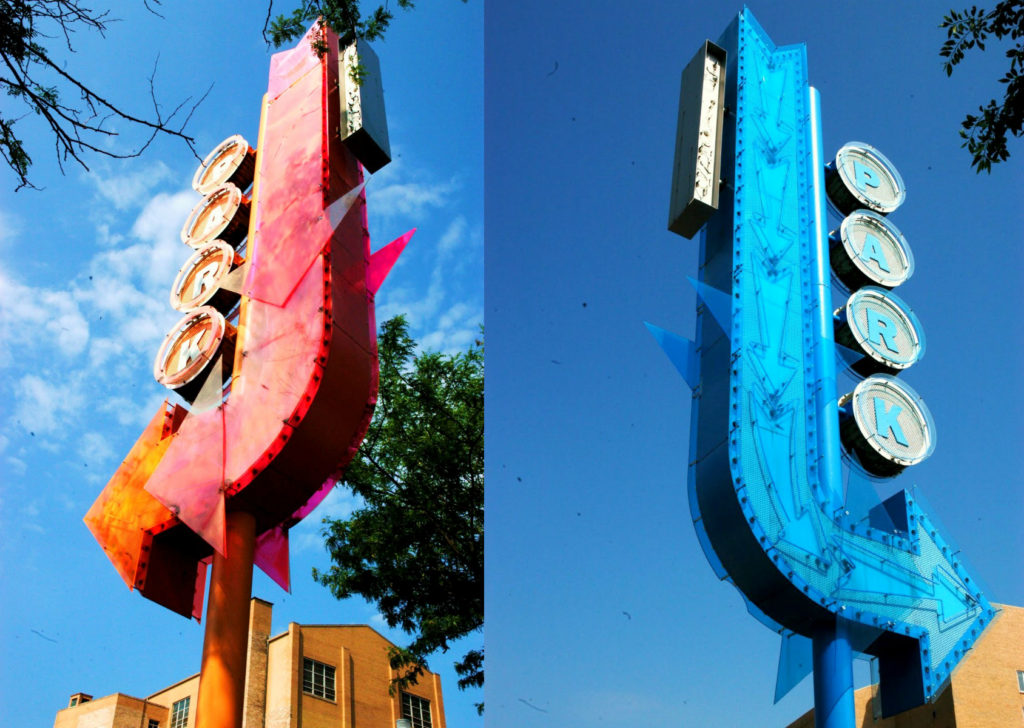 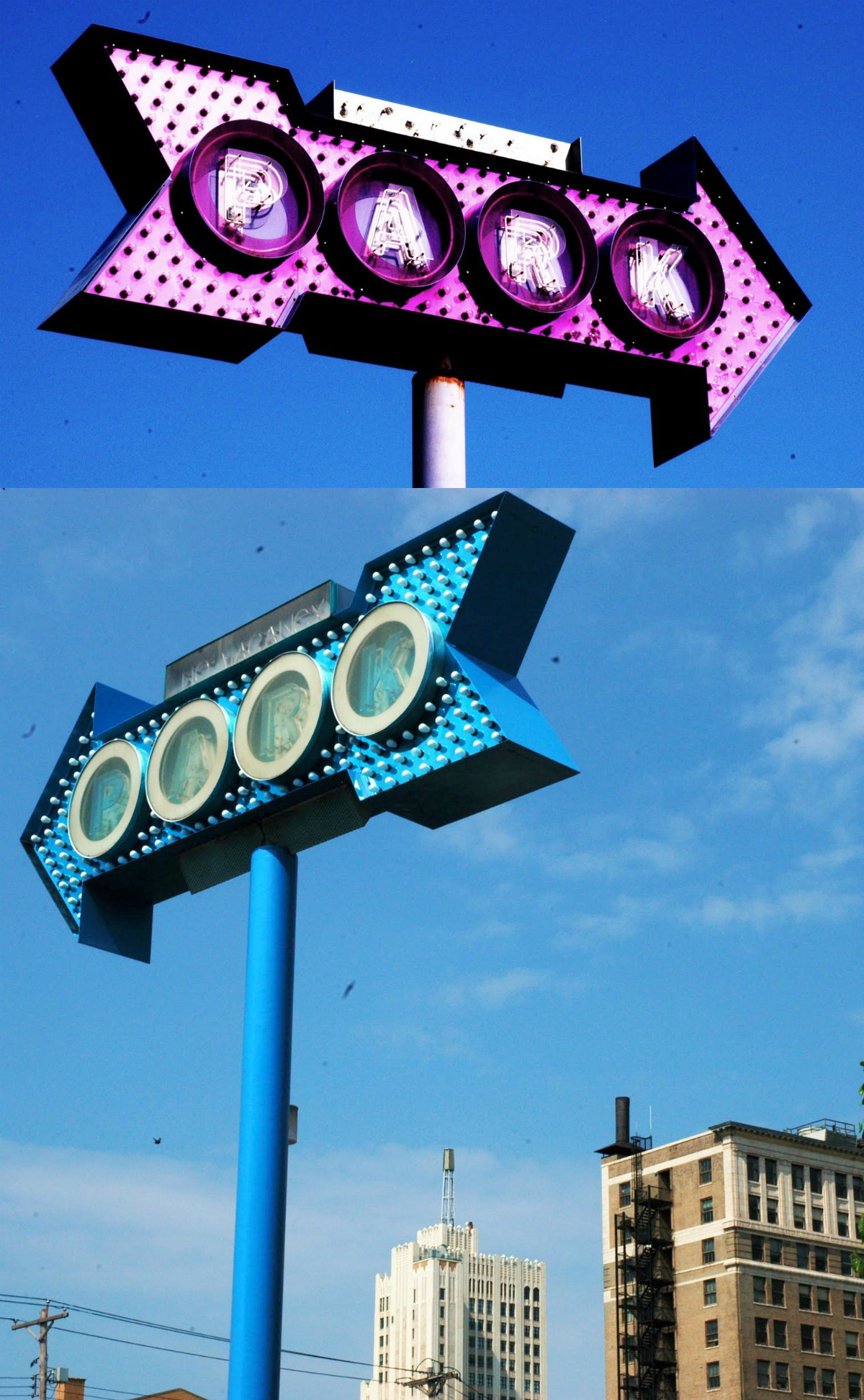 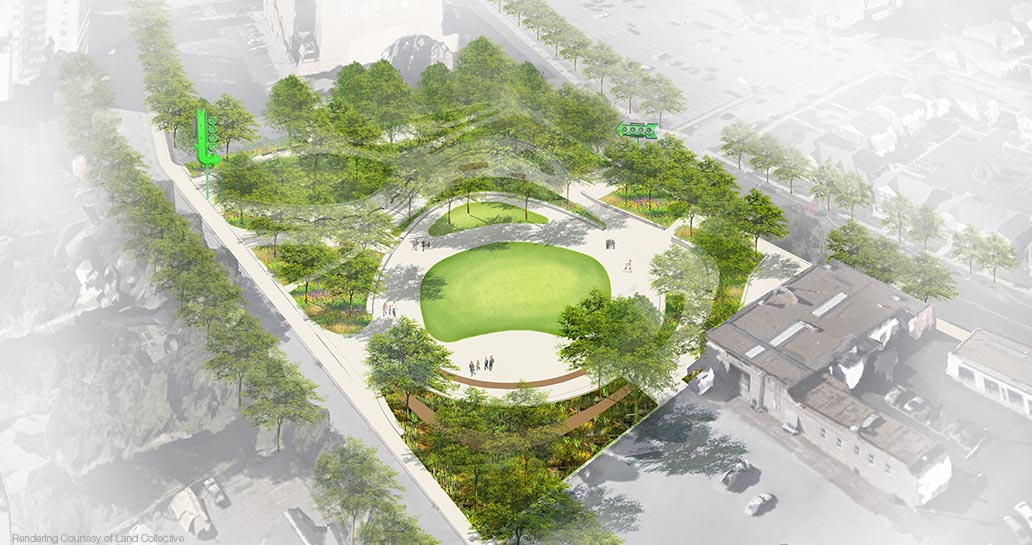 While some festivals and events will able use Strauss Park and other locations around Grand Center, or close streets, or occupy parking lots, the Performance Green will provide the purpose-built and design infrastructure to support more regular events. Perhaps the most analogous investment in the city’s seasonal art scene was the recent investment in permanent infrastructure to support the annual Shakespeare Festival at the Shakespeare Glen in Forest Park.

The Performance Green would add significantly to the planned investment in green space in Grand Center. Strauss Park, facing the Fox Theatre, was recently remade, and the Tilted Plane at Grand and Grandel will soon be transformed into Arts Academy Plaza. The investments set the stage for the area to support significant development and increased density. 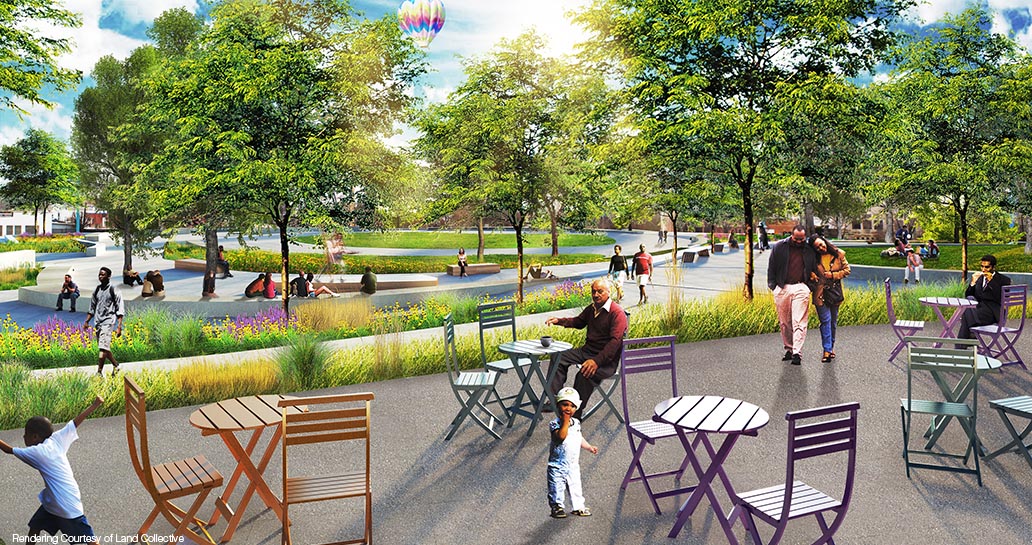 As with all spaces seeking to achieve the trendy goal of “activated green space”, the success of the park will be determined by programming. The space will provide Grand Center the opportunity to turn outward in a way that’s been attempted with only some success. Projects like the Pulitzer Foundation’s PXSTL have made use of outdoor space, but the venues and museums of Grand Center are quite cloistered.

Circus Flora hopes to attract 35,000 people to its production in Grand Center this year, but the organization is engaged year round in a variety of outreach and educational programs. In addition to its long-standing partnership with the St. Louis Symphony Orchestra, Circus Flora’s Clowns on Call program has visited more than 3,000 children at SSM Cardinal Glennon and Mercy Children’s hospitals.

The circus tent footprint can clearly be seen in aerial images. The second image was posted by the St. Louis Symphony Orchestra: 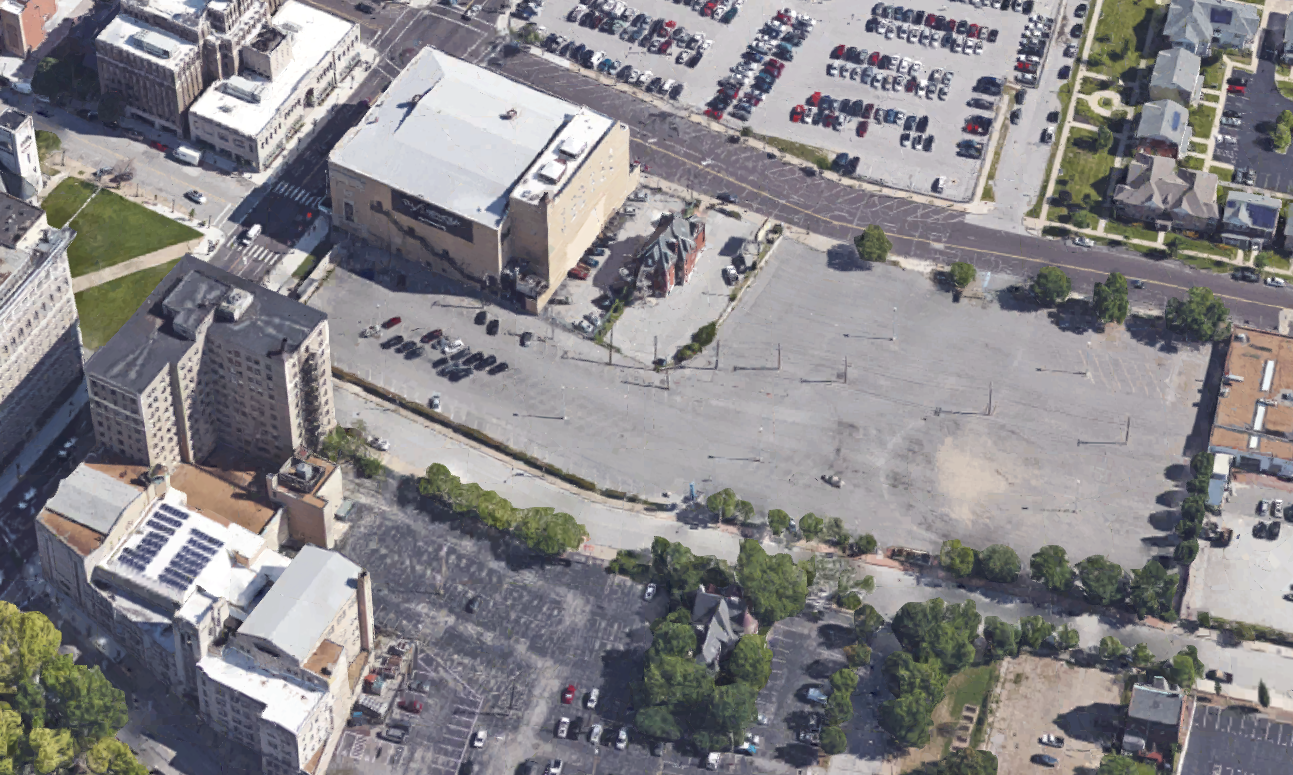 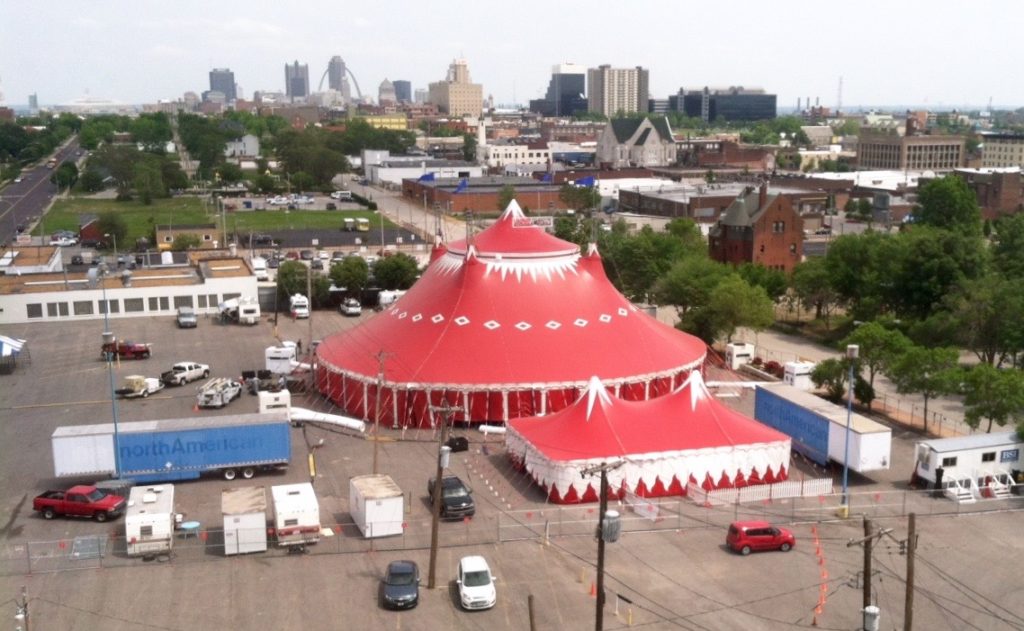 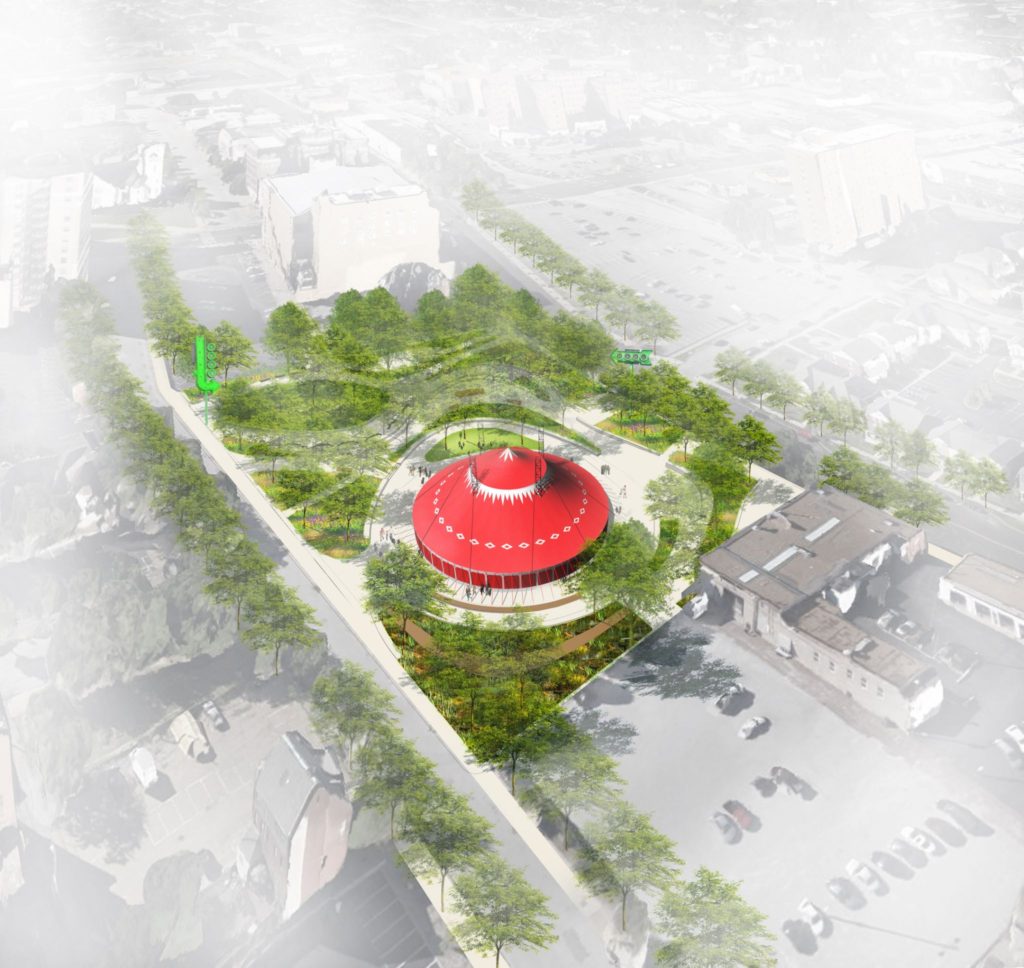 Commissioned by famed Italian composer Gian Carlo Menotti for the Spoleto Festival in 1986, Circus Flora immediately set about creating productions unlike most Americans had seen before – productions that melded the best elements of traditional European circus with modern theater techniques and sensibilities. From the very beginning, every Circus Flora production has been an original performance, its storyline often rooted in history or literature. Through the narrative, individual acts are woven into a cohesive story, further developed and enhanced by live music composed specifically for the productions. With its 30th anniversary around the corner, Circus Flora has become part of the cultural fabric of St. Louis—an anticipated event and harbinger of summer in the city.

Owing to its leading role in revitalizing circus as a professional performing art, Circus Flora has garnered national and international recognition, receiving many special performance invitations over its nearly three-decade history. In 1997, Circus Flora’s big top tent was the first ever to be erected at the Kennedy Center in Washington, D.C.; and in 2002, the tent was raised at The Lincoln Center Festival in New York City. Additionally, the Circus has made an unprecedented six appearances at the prestigious Spoleto Festival USA in Charleston, South Carolina, and five appearances on the Island of Nantucket.

Circus Flora showcases world-class talent by both new artists and venerable talent. Their performances represent the continuation and evolution of circus arts and ensure its future for generations to come.