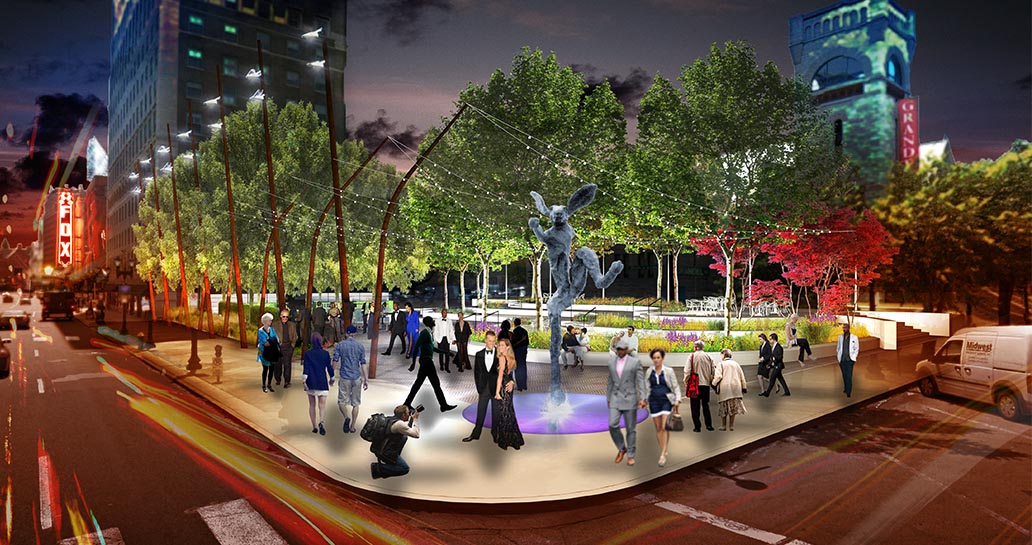 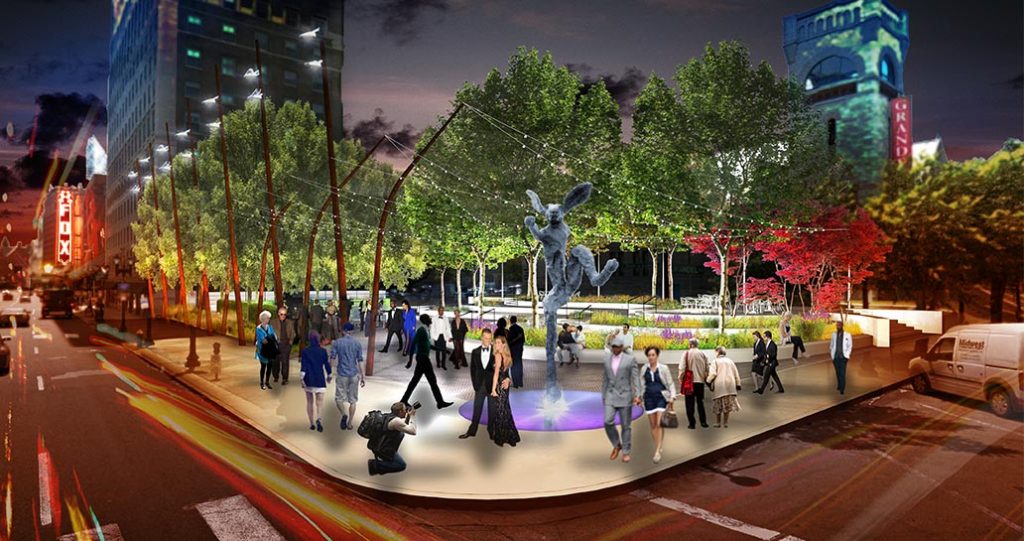 Grand Center is on the verge of something big. But first, the city’s arts district appears set to get its small spaces right. Announced this past week is a remake of the green space at the corner of Grand Boulevard and Grandel Square. Currently occupying the space is an earthen artwork entitled Tilted Plane.

That work, designed by artist James Turrell and completed in 1990, will make way for Arts Academy Plaza, and interactive urban park. Forum Studio led the 0.32 acre park design. The aesthetic aim is to redefine the historic Grand street face and present a high-profile and architecturally significant pocket park. 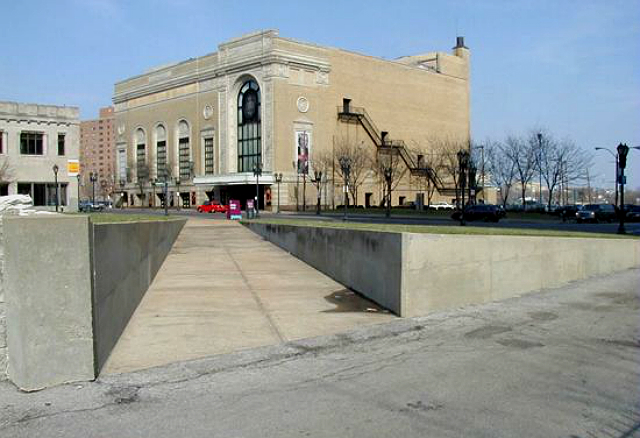 Grand Center doesn’t particularly lack green space or public plazas. Strauss Park, a half-block south of the Tilted Plane is a beautiful oasis accommodating varied uses, but is too often void of activity. The St. Louis University Art Museum outdoor space, the dog park and sculpture garden at Lindell, and the Nine Network/St. Louis Public Radio media commons are all quite nice, and also too often underpopulated.

What Grand Center has always lacked is daytime vitality. More green space won’t help this, but the pieces may be starting to align for larger development. The Tilted Plane lot is well placed to serve the Grand Center Arts Academy, symphony patrons, those attending events at a soon-to-be busy Grandel Theatre and residents and workers in planned adjacent development. 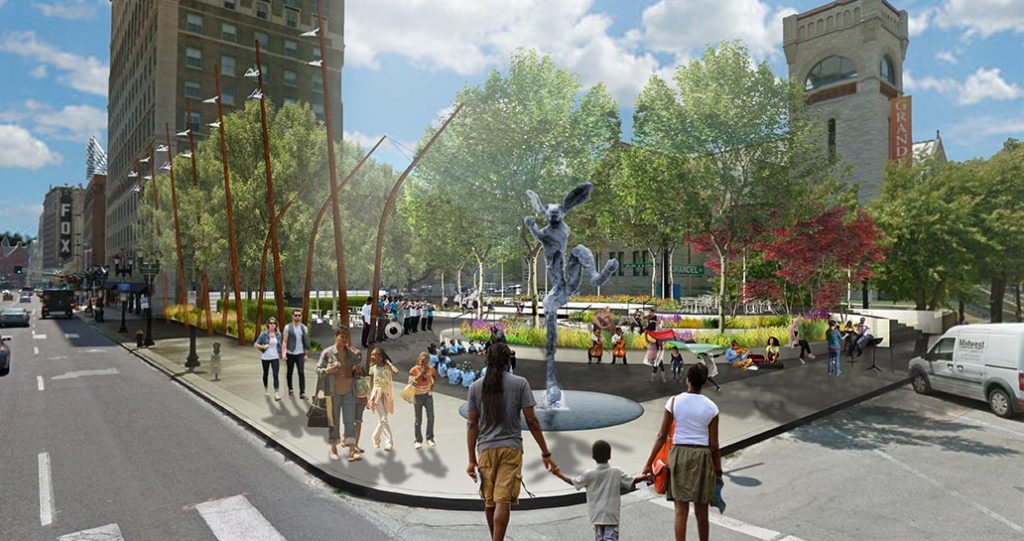 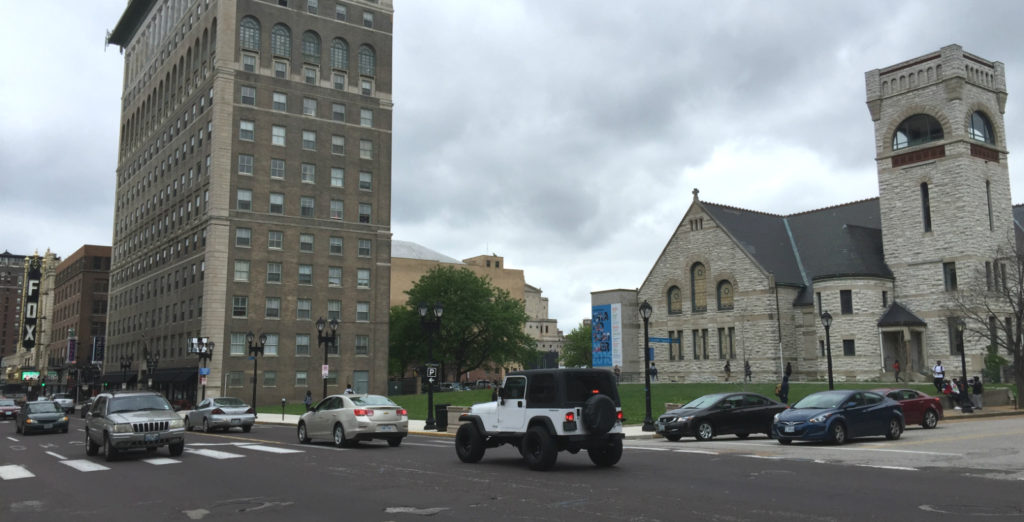 The plaza design itself appears engaging and bold. It’s very much a design to fit the times. It’s tempting to think Turrell’s work could persevere, especially as a muted space in the heart of a crowded 24/7 district, expectations change. The $1M remake is the kind of high-profile project that may catalyze addition private investment.

The plaza will feature seating terraces on three levels, a grove of trees, lighting strung across the park, architectural light poles along Grand, and the bronze sculpture titled Nijinski Hare (1996) by artist Barry Flanagan. The 17ft tall dancing hare is being relocated from its home across from Scottrade Center at the Metro transit station. Flanagan’s Thinker on a Rock (1997) is installed on the Washington University in St. Louis Danforth Campus. 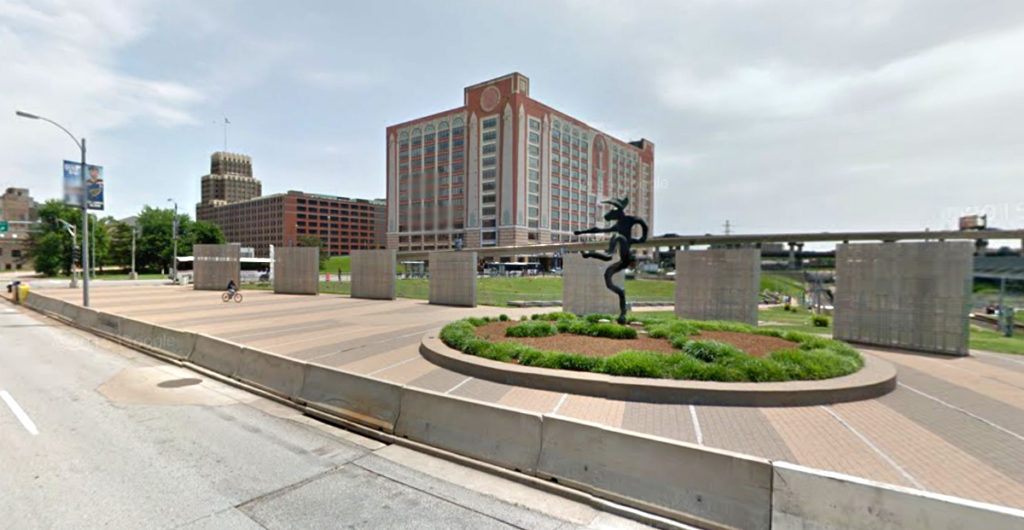 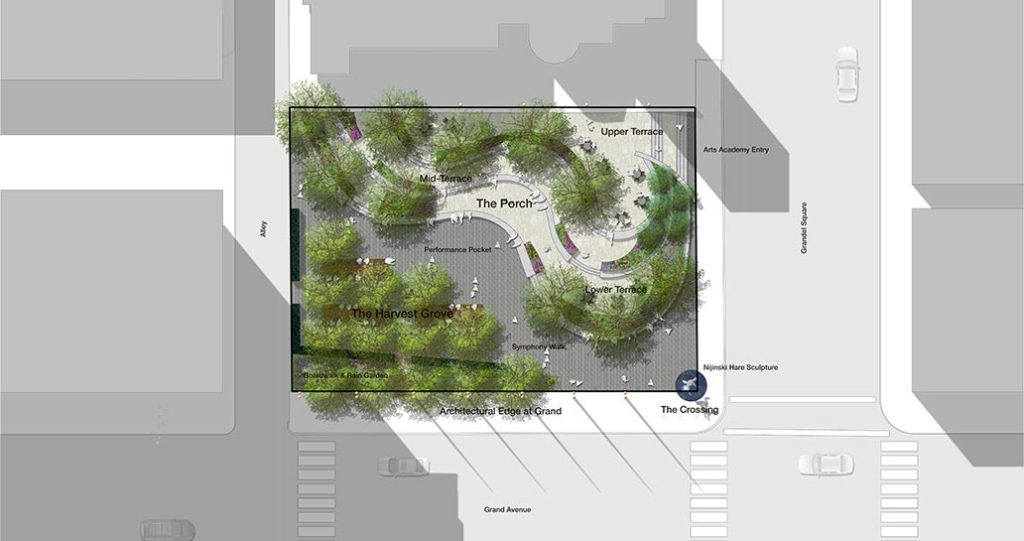 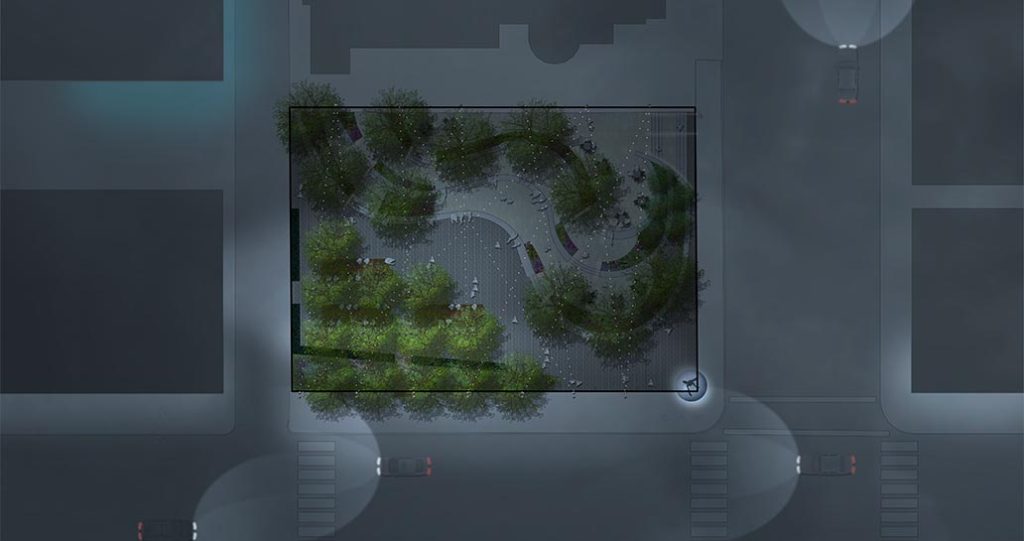 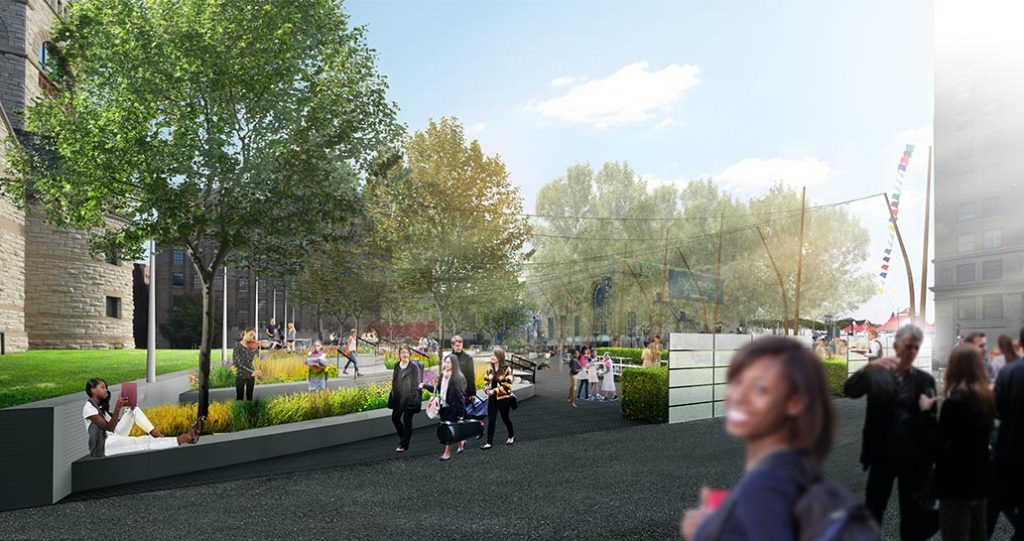 Grand Center, Inc. donated the park to the City of St. Louis. Construction of the plaza is planned to begin this summer and will funded by Metro Parks Sales Tax Fund and charitable contributions.

From the Forum Studio project page:

Arts Academy Plaza is one of the keystones of the Growing Grand Plan which strives to turn 30 acres in the heart of Saint Louis’ cultural neighborhood into a “special event district” and “an epicenter of creativity that serves the aesthetic and economic needs of artists, patrons, tourists and the entire St. Louis community.”

The design of Arts Academy Plaza will create an interactive environment, providing a variety of impromptu spaces for students, performers, and fans to engage throughout all hours of the day. A series of seating terraces help frame these spaces while mitigating the 4’ grade change that occurs from Grand Avenue to the Grandel Theatre. An amphitheater and series of harvest tables accommodate larger groups of patrons and provide outdoor dining space for the local eateries beneath the protection of the tree canopy.

The transformation of Arts Plaza will also help to reinforce the historic street edge of Grand Avenue. An extensive bioswale collects and treats site stormwater runoff and acts as a buffer from the street to ‘The Harvest Grove’. A series of architectural light poles will contribute to the artistic significance of Grande Ave and delicately string together the firefly-like catenary lights, providing a gentle ambience during evening events.