You may not have heard of the Olive Link yet, but you will. Today, Senn Bierwerks is announcing it will build a new taproom and brewery at Olive and North and South Boulevard in University City. The area has long been known for its international restaurants and markets.

The city has recently branded the area the Olive Link, divided into four districts running from “Interchange” at I-170, to “International”, then “Parkway” near Heman Park, and finally “Industrial” at the City of St. Louis border.

The brewery is scheduled to open in early 2017. On hand today for an 11am official announcement at the 7593 Olive site will be University City Mayor Shelley Welsch and City Council Members, and from Senn Bierwerks, Dustin Chalfant, President of Senn Bierwerks, James Hellmuth, Vice President, and Kristen Chalfant, Director of Marketing. 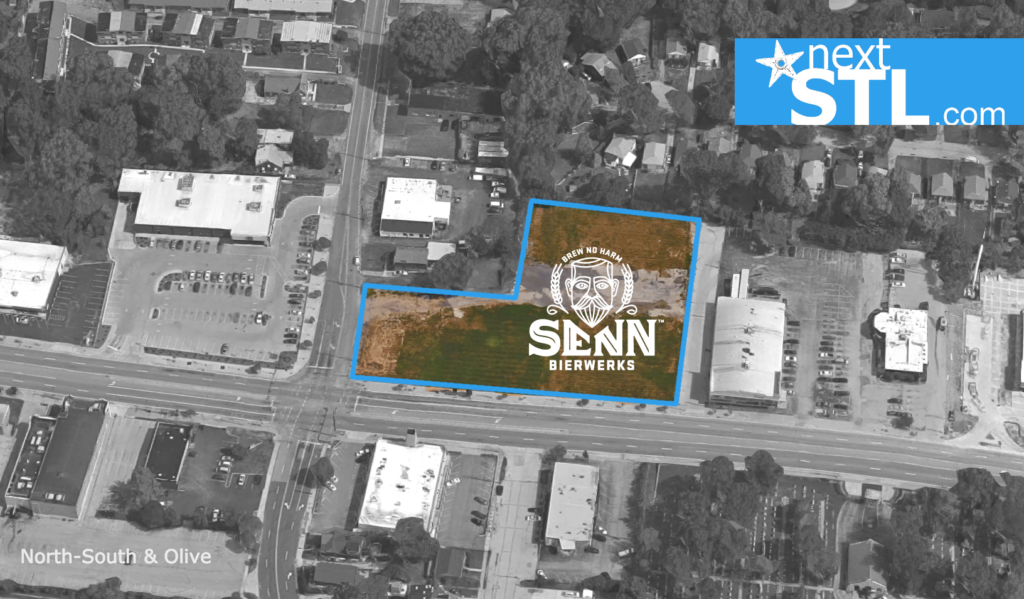 Founded by Dustin Chalfant, James Hellmuth, and Kristen Chalfant, Senn will build a 20-barrel production facility with a tasting room and beer garden on roughly 85,000 square feet on vacant land owned by University City. Senn will reportedly be the region’s first 100% aluminum packaging brewery. The brewery plans to distribute a variety of ales and lagers in 4-pack 16oz cans and 32oz crowlers (can growlers).

“We are not set on any one style of beer, and that affords us the flexibility to make whatever we feel like making,” said Kristen Chalfant when the brewery, but not the location, was announced just last month. “One thing we will stress amongst our employees is experimentation, and the opportunity to express their creativity through our pilot system. That said, we are planning to roll out with a malt forward, amber-style beer, a NWIPA, and a hop forward pilsner.”

The Senn Bierwerks mission is “Brew No Harm”, with the aim of being involved in the community, contribute to economic development, and of course brew good beer. It will be at least the fourth brewery to open in the St. Louis area in 2016.

Urban Chestnut Brewing Co. announced its Urban Research Brewery in January and the Rockwell Beer Company is set to announce a location in The Grove soon. Just west of The Grove, Modern Brewery opened last fall, Earthbound Beer announced its expansion on Cherokee Street, and Side Project Brewing is set to open in Maplewood this year. Further west in Maryland Heights, Six Mile Bridge opened, and the O’Fallon Brewery opened a new tasting room and restaurant last year. Schalfly, (AKA The St. Louis Brewery) announced it would significantly expand its brewing capacity at its Maplewood Bottleworks, perhaps delaying its search for the site of an all new brewing facility.

Where did the name come from for Senn Bierwerks? Frank Senn, Sr. was a prominent brewer in Louisville, KY. Mr. Senn was born in Germany and came to Louisville when he was just 15 years old to work at the Cooper’s Trade. He later learned the brewing business becoming interested in the old Boone Brewery. In 1874, he started a brewery of his own, Frank Senn Brewery. He eventually sold the brewery to his brothers, Martin & Casper, and in 1877 with Phillip Ackerman, organized the Senn & Ackerman Brewing Co., which later closed due to prohibition. Dustin Chalfant is the 4x great nephew of Frank Senn, Sr.