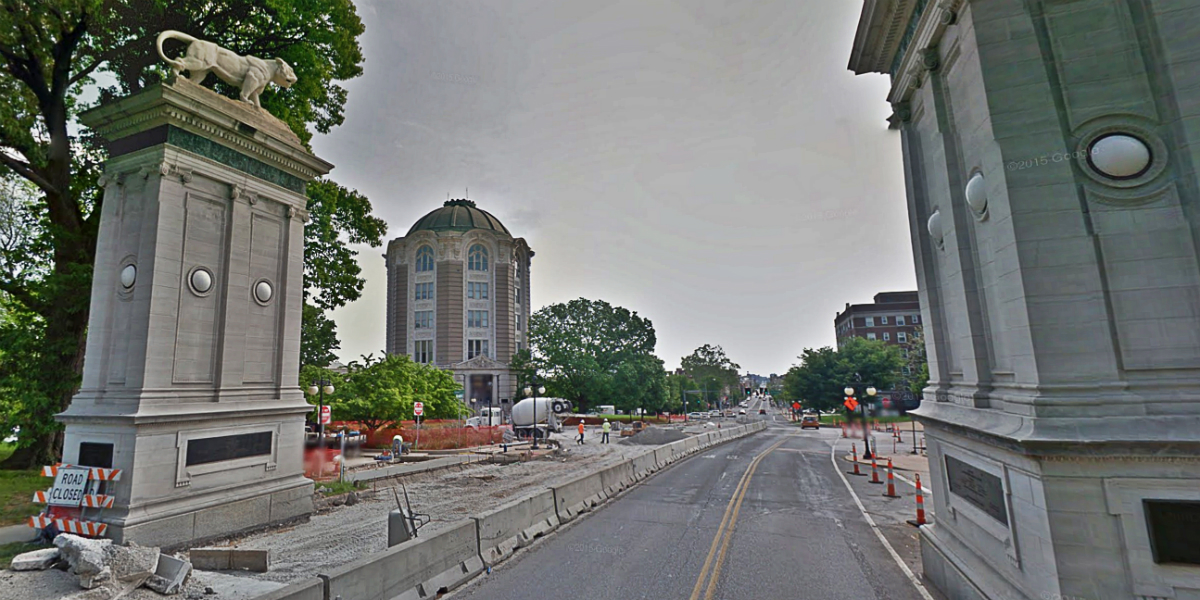 It’s not possible to cover all the issues on the ballot tomorrow across the St. Louis region (we wish we could). But some stand out more than others. For instance, we suggest a NO vote on both Prop S and Y. University City has its challenges, and while it’s not nearly as dysfunctional as some would like to betray, its ability to function politically is important as its 35,000 residents mark it as a major St. Louis County municipality. We urge a NO vote on Prop H.

The city is has recently debated fire and ambulance service, the Loop Trolley, development of city-subsidized free parking, and more. The city’s also seeing $800K+ single-family infill and moving forward with a plan to invest in Olive Boulevard. And despite perpetual concern about the The Loop being so crowded that no one goes there anymore, things are going well there.

Anyway, this success seems to have spurred preservation efforts, not just historic preservation, but the preservation of how things are, of the status quo. NIMBY isn’t the best term for what’s happening in U-City, but for lack of something more descriptive, we’ll use it here. Those who have invested in U-City, own an historic home, and consider it their town aren’t very excited about change.

The quick summary of real issues at play is as follows: a developer has envisioned a residential development for the long vacant Delmar Harvard school and adjacent parking lot. Some people think this is a terrible idea. The proposal we wrote of has seemingly gone nowhere, in part due to opposition from some neighbors. Also, the U-City city council just voted to build a new police station, vacating the historic and unsuitable 1938 City Hall annex.

So you lump the Trolley, other changes in U-City, a development proposal and people who don’t like seeing things change, and voila, Prop H. The purpose of Prop H is to prevent U-City from doing much of anything with the following buildings without requiring a popular vote: City Hall at 6801 Delmar Boulevard, the Annex (police station and old firehouse), Old Public Library at 630 Trinity Avenue, the University City Public Library at 6701 Delmar Boulevard, the Sutter-Meyer house at 6826 Chamberlain Court and, The Gates of Opportunity (Lion Gates).

What’s wrong with Prop H? The intent is to preserve select buildings and structures. If passed, Prop H would present an enormous impediment to reuse. Preservation requires reuse. Prop H would require an election for any lease or sale of the buildings listed above. Municipal elections are held every two years. Holding a special election at another time would be expensive. What tenant or developer would engage in work knowing a popular vote would delay and ultimately determine the project’s future?

What tenant would seek to lease a small office space in the Annex if it required a popular vote? At what point in lease negotiations would it be determined a vote were necessary? Not to mention, who is going to buy or lease the Lion Gates? Is there a threat of the city selling them?

According to U-City Mayor Shelley Welsch, there are no plans to either sell or demolish any of the buildings listed in Prop H. This doesn’t mean that concerned residents shouldn’t be vigilant, but does mean Prop H is a hurried, inarticulate solution that attempts to guess at a worst-case scenario possible future problem.

Some residents may not like every development in U-City, but there is a public process that is used and available to them. The U-City city council hasn’t been shown to be deaf to public input. No project has been pushed through without public input and extensive discussion. What Prop H would do is make a few people feel as though they’d preserved their U-City, while placing a burden on future development and the voices of residents.

Removing the word “lease” from Prop H would solve a significant flaw. The 138-year-old Sutter-Meyer House, the oldest in U-City, is currently leased to a non-profit dedicated to its preservation. The lease is for $1/yr for 25 years. Should such a lease be sent to residents for a vote? Still, even if only pertaining to the sale of buildings, Prop H should not be supported.

Prop H ignores the challenges of repurposing historic buildings. For the same reason the city chose to build a new police station, the future of these historic structures is uncertain. Reuse is expensive. What can be assumed is that these buildings are likely to need historic tax credits and other incentive only accessible to private developers to preserved long term. U-City itself cannot utilize tax credits, and will almost certainly not have need for more space for municipal functions.

The residents of U-City will always have the opportunity and right to weigh in on developments and changes in the community, and certainly any changes to historically important civic buildings. What Prop H would do is harm the future viability of these buildings and remove the opportunity for the city council and residents to fully consider future uses.

PROPOSITION H: Shall the City of University City amend Article XI Public Improvement Generally by adding a new section to be designated Section 97 stating that the following land and structures, to the extent now or hereafter owned by the City or any agency or instrumentality of the City, shall not be sold, leased, given away or otherwise disposed of unless such sale, lease, disposal or gift be approved by a majority of the qualified electors voting on an ordinance to be submitted by the council in the manner prescribed in Article XII, Section 122 of this Charter, (a) the land and buildings on the site described in the general warranty deed of May 15, 1930, deed book 1088, page 113, including City Hall at 6801 Delmar Boulevard, the Annex commonly known as the police station and old firehouse, and the Old Public Library at 630 Trinity Avenue, (b) the University City Public Library at 6701 Delmar Boulevard and the land described in the general warranty deed of June 20, 1968, deed book 6333, page 2313, (c) the Sutter-Meyer house at 6826 Chamberlain Court and the site described in the general warranty deed of October 22, 2003, deed book 15429, page 3043, (d) The Gates of Opportunity, commonly known as the Lion Gates monument on the public right-of-way near Delmar Boulevard and Trinity Avenue?