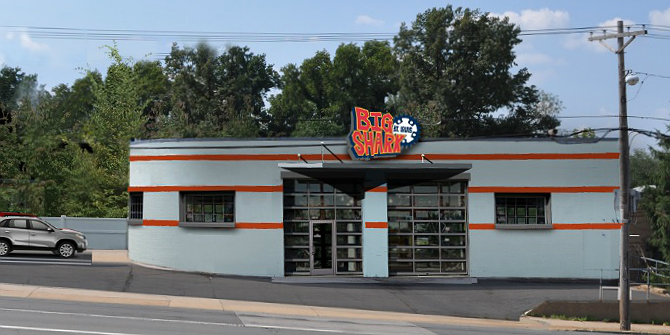 As we noted when initially reporting on the 14-story mixed-use building planned for The Loop, Big Shark Bicycle Company has been looking for a new tank. As caught by 40 South News, we’ve finally reeled in the exact location. The shop will occupy the former Hi-Fi Fo-Fum building at 1155 S. Big Bend Boulevard in Richmond Heights, with a some significant changes.

The shop will occupy the single-story garage on the north end of the site. The two-story building at the corner will be demolished, leaving approximately 7,000sf of retail space. According to Big Shark owner Mike Weiss, the corner building has been found to be structurally unsafe and could not be renovated. The single-story building will retain the glass block art deco windows on the north and west walls. The garage doors will be glassed in for an entrance and a functioning glass garage door will open to a patio area. The area to the south will become 22 parking spaces and landscaping.

The new location, just north of I-64 and across from the popular Fozzie’s Sandwich Emporium, has a nearly identical foot print to the current location at 6133 Delmar Boulevard. The Loop location is planned to remain open through mid-April with a transition to the new location taking just a few days.

Weiss recently told the Riverfront Times that the changing Loop prompted the move. “Parking is a problem because everyone else is so busy,” Weiss stated. “It seems like the Loop has become a destination for entertainment and dining at the expense of retail.”

Building owner and Loop developer Joe Edwards also has plans for the location, which will become a concert venue filling a size between the Pageant and Blueberry Hill’s Duck Room. Immediately east is planned a 14-story mixed-used development with 210 apartments. Edwards is the driving force behind the Loop Trolley project, which some believe will make Delmar less bike-friendly by introducing rails to the street. Echelon Constructors is renovating the building. The building’s owner, Hany Abounader co-developed the Del Taco/Naugles “Flying Saucer” building on Grand and Forest Park Avenue. The location has served as a supermarket and auto-repair shop. Hi-Fi Fo-Fum closed in early 2011 following the death of longtime owner Ron Bliffert. The building has been vacant since.

Big Shark opened in The Loop in 1993. Its first location was next to Vintage Vinyl, then across the street, then east to its current location. Big Shark also operates a downtown location next to the Downtown Bike Station, and a third location in Chesterfield, where it operates its Pedal Hard training facility.

Big Shark has appeared annually on Bicycle Retailer’s Top 100 bike shop list and has been recognized by several publications as a top bicycle shop in the nation. The shop and owner Mike Weiss, run events from UCI internationally sanctioned cyclocross races, to the Gateway Cup criterium series, and triathlon events. He was also instrumental in bringing the Tour of Missouri to the state for its three-year run.