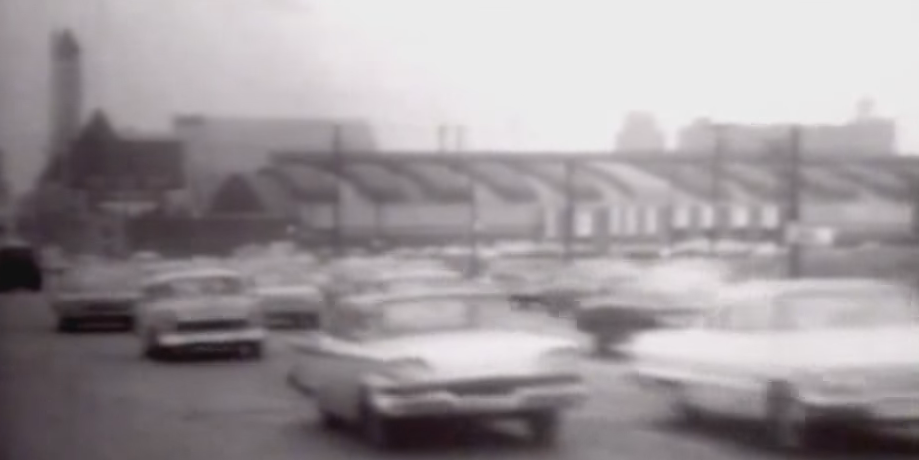 On average, the St. Louis commuter today moves quickly. We also move farther. In 2010 St. Louis ranked 3rd of 31 metro areas of 1-3M residents, with congestion during the peak period adding just 12% more time to the average St. Louisan’s commute. And congestion improved year-over-year in the 2000s. However, as congestion has declined in St. Louis, commute times grew.

Peak hour commuters spent an average of 289 hours behind the wheel in 2009, 36 hours more than in 1999 when congestion was significantly worse. The reason for longer commutes, even if that time is spent moving faster? Between 1950 and 2000, St. Louis’s urban population grew 48% while urban (developed) land area grew by more than 260%. Sprawl has meant longer transit trips as well. In 2008, MetroLink riders travelled an average of 7.3 miles per trip, 6th most in the country amongst light rail and metro rail transit systems (APTA).

At its worst, accidents, flooding, (a little rain, the sun in driver’s eyes, a hill) etc., can slow traffic to a crawl. More than a century ago, the horse car, the city’s first public transit vehicle, could average six miles an hour. An hour commute from downtown Kirkwood to downtown St. Louis would be an average of about 15 MPH. Today, the rush hour commute can often be about 40 minutes, or roughly 23 MPH.

It’s perhaps instructive to understand how many, if not most, people would call for more and bigger roads after spending an hour day-after-day in their cars from Kirkwood to downtown St. Louis. Fast forward to today and as much as any American city  St. Louis has solved the congestion problem. The solution has created other problems of course. But perhaps we should formally declare victory, pat ourselves on the back, then commit to building a more sustainable, equitable system.

[Narrator]
Judy Garland once sang a trolley car song that had its background in St. Louis from the days of the great World’s Fair. Many people even today have a sentimental regard for the old trolley lines of St. Louis.

But this was not our first form of city transit, not by about forty years. The first real transit vehicle to operate on the streets of St. Louis was a horse car. If there weren’t too many stops along the way, a horse car could negotiate the flat stretches of the North Broadway line at an average speed of six miles an hour.

On the average, most of us undoubtedly make better time going home of an evening then did our ancestors of the horse cart era a century ago, but the point is that we don’t do very much better. In great-great-great grandfather’s day a man could drive his own horse and buggy along a suburban highway at an average speed of 15 miles an hour.

It’s interesting to compare this with the modern commuter’s average speed during the evening rush hour between St. Louis and, oh say, Kirkwood or Richmond Heights. What we find is that over the past hundred years we have done a little better, but very little better than simply hold our own.

Nowadays the jet traveler no longer bothers to tell his friends that it took him longer to get his car off the lot and drive to the airport than it did to fly to Chicago. This sort of thing has come to be an accepted fact of travel life in the 1960’s, too commonplace to be worth talking about.

But so is the rush hour traffic jam, the bumper-to-bumper accumulation of stopped or slow
moving motor vehicles on Grand at Arsenal, or on the Veterans Bridge, or on the Daniel Boone highway at Skinker.

This too is a part of life in the twentieth century, and in his sacred heart every motorist who’s driving home alone in a one-and-a-half ton, 18-foot, two-hundred-and-fifty horsepower automobile knows what’s really at the root of the whole frustrating problem. It’s not his fault that traffic’s jammed, it’s simply that there are too many other automobiles on the street. 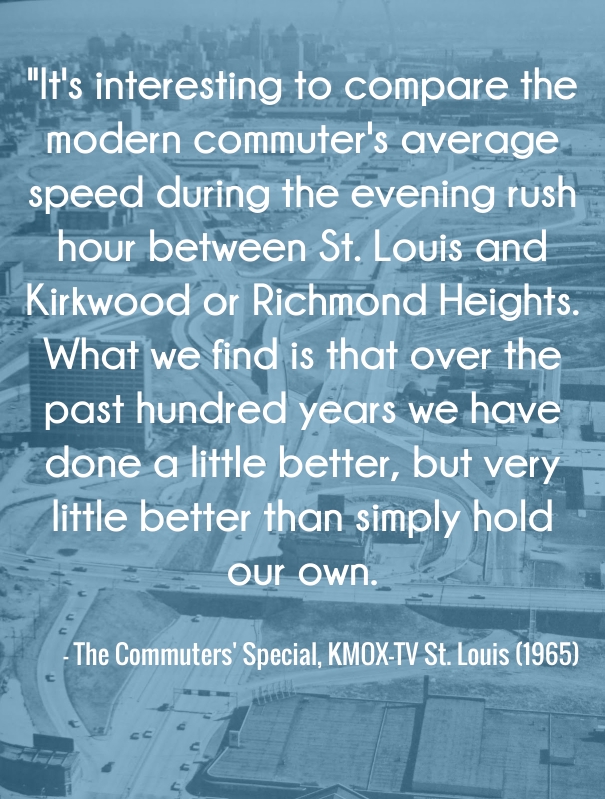