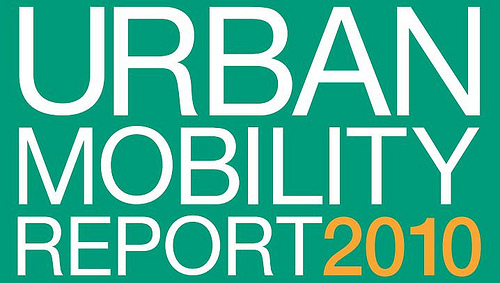 Good news for St. Louis commuters. According to the 2010 Urban Mobility Report published last week by the Texas Transportation Institute at Texas A&M University, St. Louis is one of the least congested cities in the US. Amongst the 31 metro areas with populations between 1 and 3 million, St. Louis ranks 3rd best with congestion during the peak period only adding 12% more time to the average St. Louisan’s commute. In fact, since 2000, the roads in St. Louis have become steadily less congested almost every year. In addition, congestion cost the average St. Louis commuter 31 hours and $772 in wasted time and fuel in 2009, a marked improvement from the 44 hours and $1,062 in 1999.

Unfortunately, a closer look at the data in the Urban Mobility Report reveals a puzzling fact: despite reduced congestion on the region’s roads, commutes in St. Louis are getting longer than ever before. Peak hour commuters spent an average of 289 hours behind the wheel in 2009, 36 hours more than in 1999 when congestion was significantly worse. In fact, according to the UMR report, St. Louis has the 5th longest commutes among metro areas over 1 million population (Los Angeles and New York, bafflingly, are ranked 22nd and 33rd, respectively). How is it that that commuting times get longer as congestion decreases?

The answer to the puzzle, of course, lies in the sprawling nature of St. Louis’s suburbs. Between 1950 and 2000, St. Louis’s urban population grew 48% while urban land area grew over 260%.

St. Louis’s extensive highway network may be partially to blame for the region’s sprawl, enabling people to live far away from their jobs and…everywhere. As pointed out on the Urbanophile site, St. Louis has the 3rd most freeway lane miles per capita amongst metro areas over 1 million in population. First place goes to cross-state neighbor Kansas City.

Sprawl has meant that even trips via MetroLink are lengthy: in 2008, MetroLink riders travelled an average of 7.3 miles per trip, 6th most in the country amongst light rail and metro rail transit systems (APTA).

Ultimately, the Urban Mobility Report’s narrow focus on congestion has drawn critics to demand changes to way we analyze and build our cities. The excellent Greater Greater Washington blog had a good explanation the matter.

The TTI report narrowly looks at only one factor: how fast traffic moves. Consider two hypothetical cities. In Denseopolis, people live within 2 miles of work on average, but the roads are fairly clogged and drivers can only go about 20 miles per hour. However, it only takes an average of 6 minutes to get to work, which isn’t bad.

On the other hand, in Sprawlville, people live about 30 miles from work on average, but there are lots and lots of fast-moving freeways, so people can drive 60 mph. That means it takes 30 minutes to get to work.

Which city is more congested? By TTI’s methods, it’s Denseopolis. But it’s the people of Sprawlville who spend more time commuting, and thus have less time to be with their families and for recreation.

MoDOT continues to build new highways such as MO-141 and MO-364 and expand existing ones such as I-64 and I-70, enabling people to live further and further from their jobs and… everything. The highways are, also, of dubious economic value to the region. Perhaps it’s time for the region to refocus it’s infrastructure priorities on the region inside I-270? Afterall, Generation Y may just demand it.