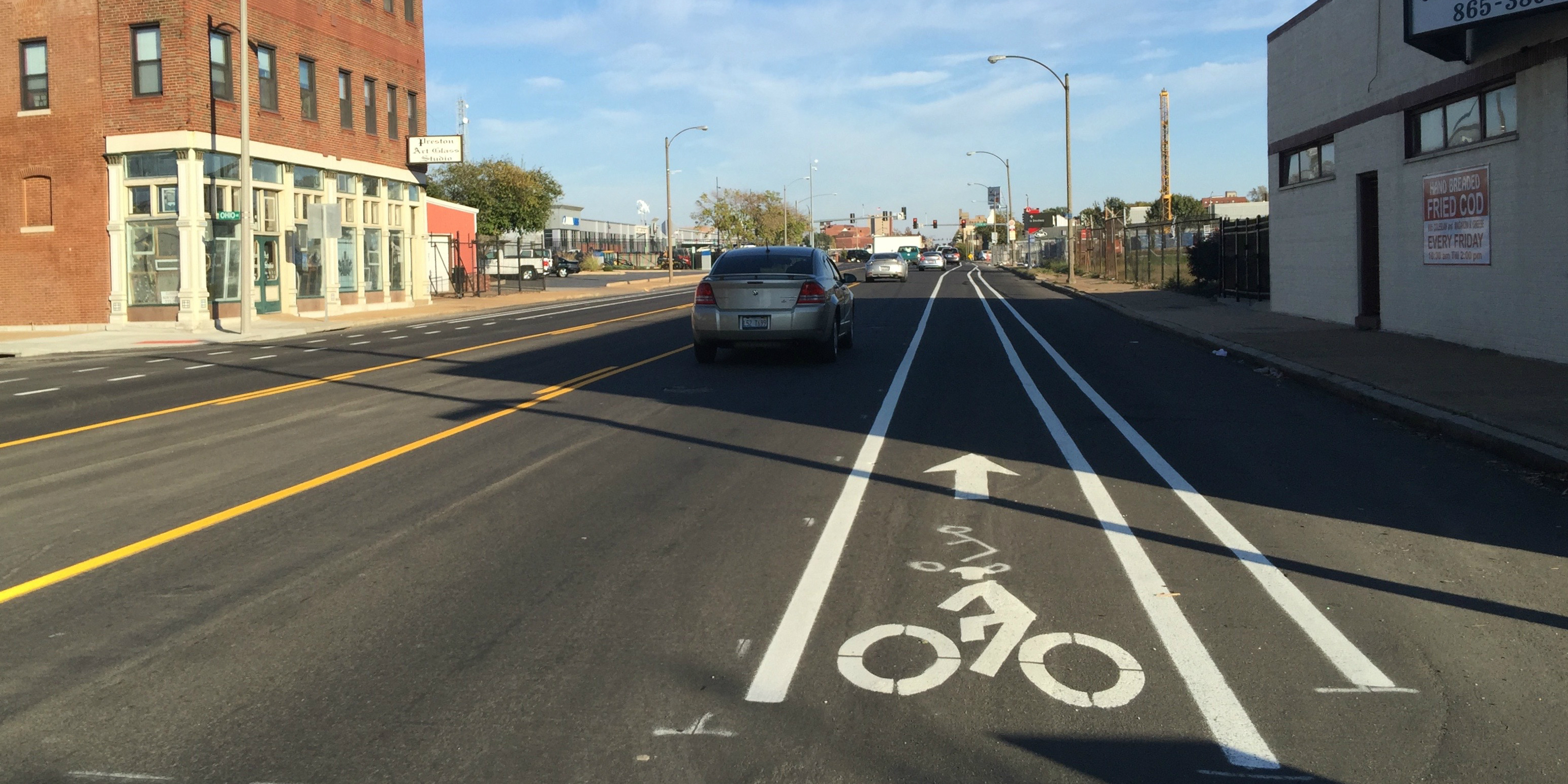 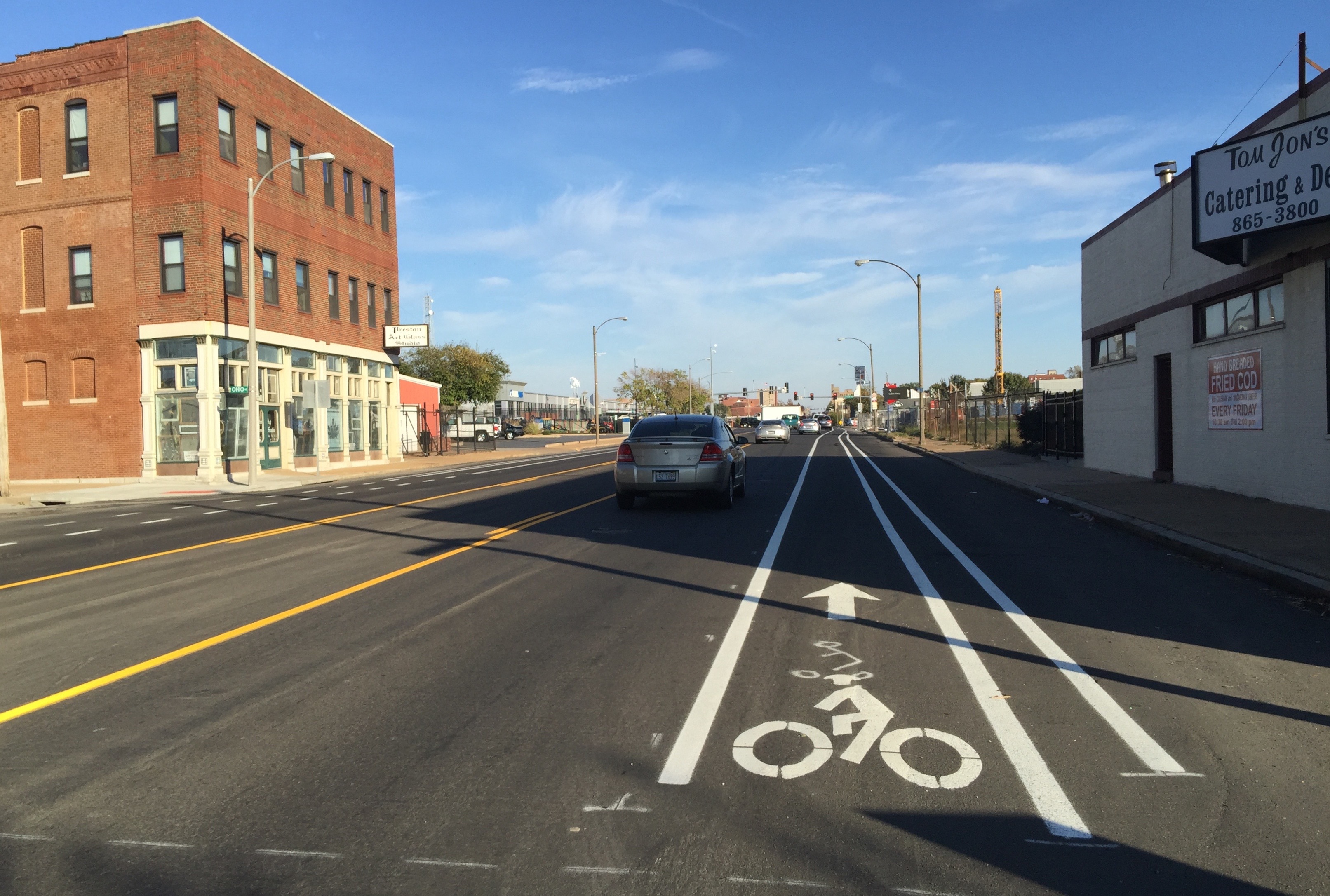 The Chouteau Avenue bike lanes in St. Louis have been something of a mystery. Really. It first appeared on a Bike St. Louis map as far back as 2009. Three miles of painted bike lanes from Vandeventer Avenue at The Grove, to Broadway at the foot of Soulard. The thing is, they didn’t exist, until this month.

It appears to be city policy to paint bike lanes as part of larger resurfacing efforts. This is smart in one way, but also means that we may wait years before lanes are painted. And if a repaving project is delayed, so is the bike lane. Once paved and painted, there’s no established timeline for repainting.

This process precludes any planned, coherent, strategic development of cycling routes and bike lanes in the city. The city continues to paint bike lanes where it’s cheap and convenient, and without significant public feedback. And the lanes continue to fill with debris and be practically unusable. 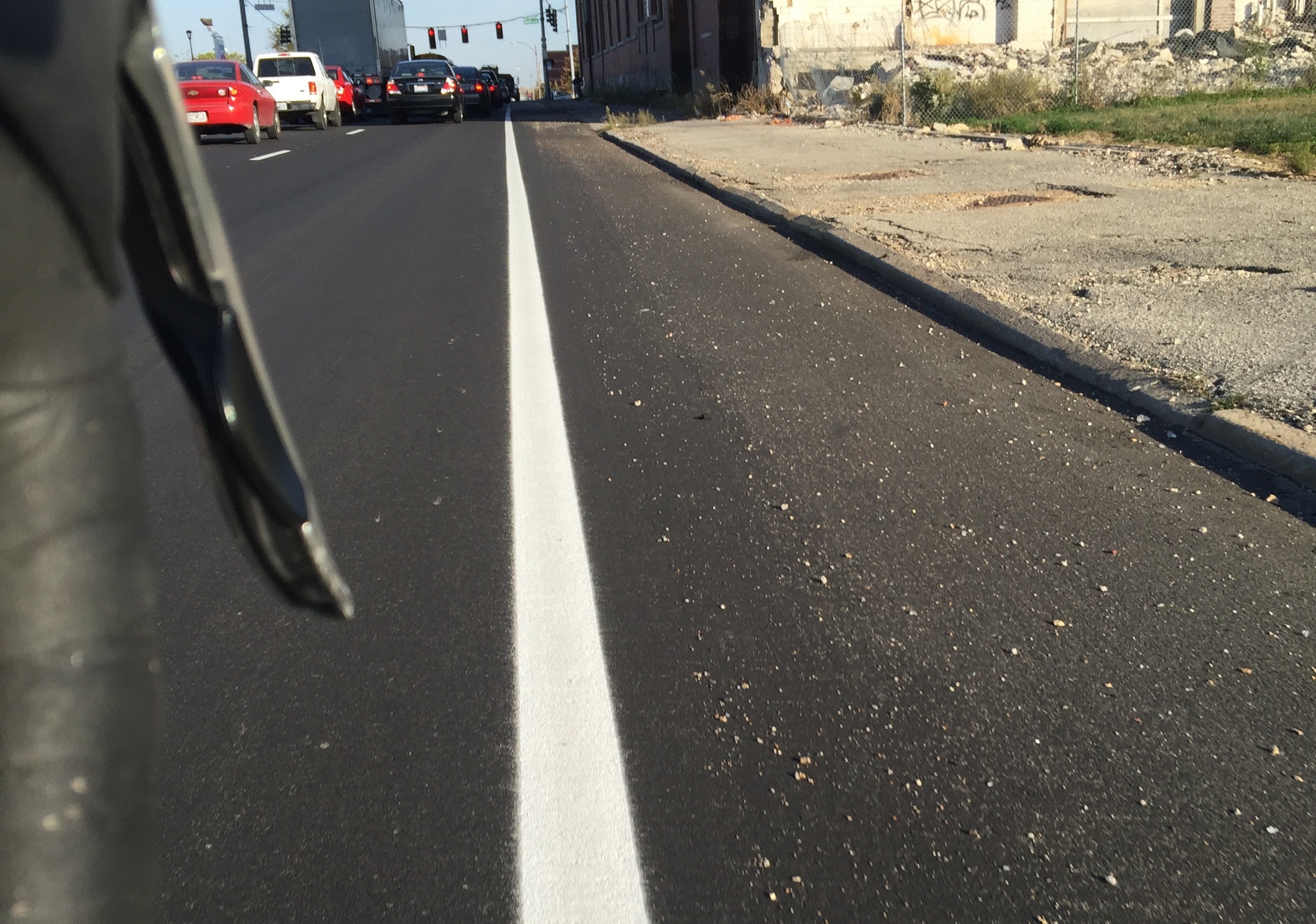 And so the Chouteau bike lanes appeared this month. They represent another good addition to cycling infrastructure in the city, and another missed opportunity. When asked for details of the bike lanes via Twitter before painting, MoDOT St. Louis simply replied that nothing was available to share. Neither the city, nor Trailnet, nor Great Rivers Greenway were able to provide the plan. Chouteau Avenue is also Missouri State Route 100, meaning it’s managed by the state’s DOT.

We were left to guess as to the coming configuration, and put together this image (above) of what to expect. While intersection treatment varies, and four traffic lanes persist past major intersections before being reduced to two, this is basically what was painted.

A much better solution would have been to create a two-way cycle track on the north side of Chouteau as a number of superblocks provide many fewer intersections that would be expected. And although the road diet has reduced traffic lanes, Chouteau remains an open asphalt expanse and drivers treat it as such. Traffic moves fast. On arterial roads like this, cyclists are better served by separated infrastructure. 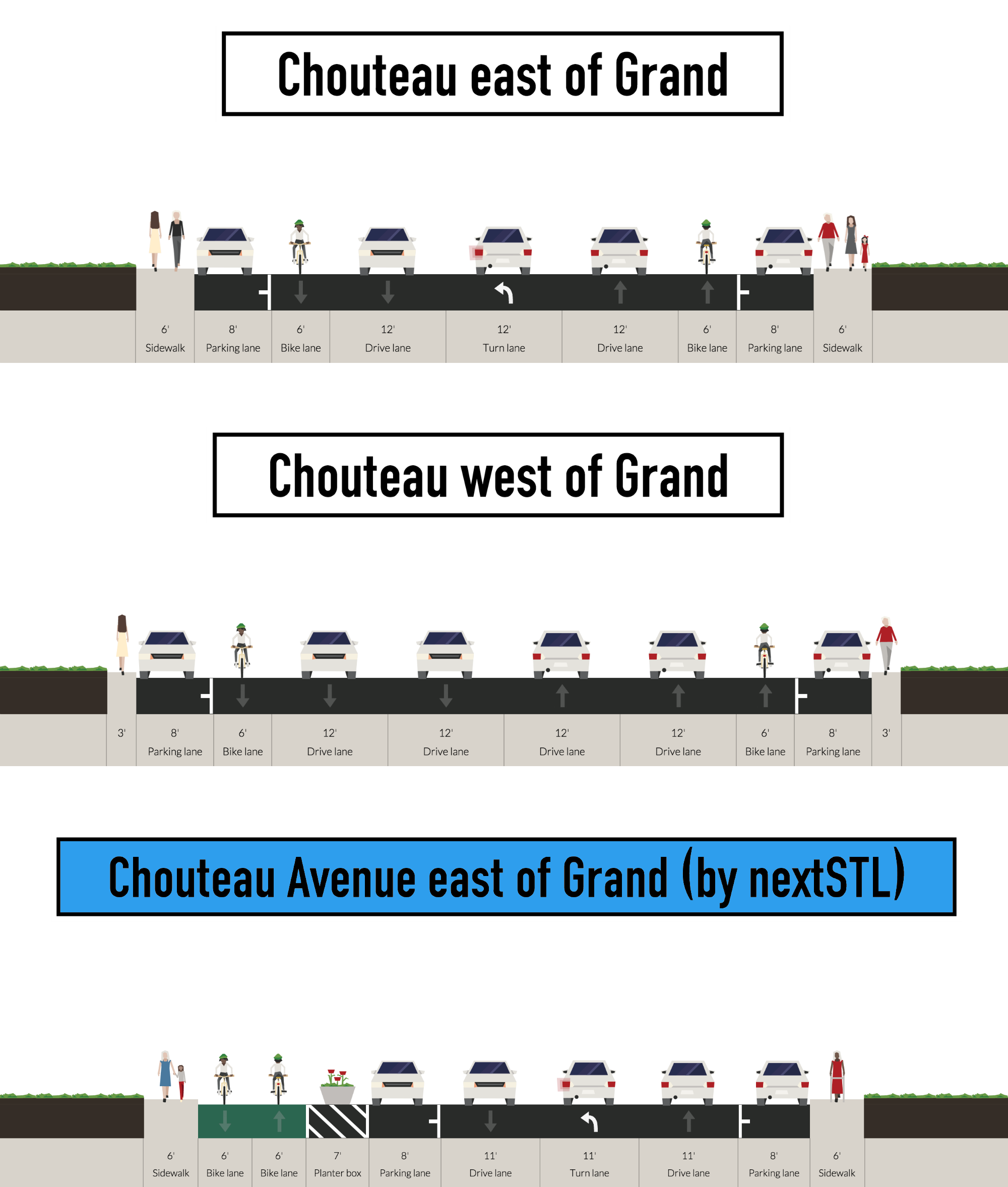 On Chouteau, the solution could have even been a mixed-use path serving both pedestrians and cyclists. The same treatment would be welcome on Jefferson Avenue where an unprotected sidewalk provides pedestrians with an unwelcoming space, and a minimum width bike lane fails to provide a safe place for cyclists. Combining the sidewalk and bike lane into one protected surface would have offered a safe travel zone.

While street parking is maintained along the length of Chouteau east of Grand, on any given day there are close to zero cars parked along long stretches. This adds to the effective street width and encourages faster driving, now with adjacent bike lanes. If nothing else, a little more paint emphasizing the new arrangement would be welcome. (Jefferson Avenue on left)

St. Louis City desperately needs a better infrastructure plan for all users. With a traffic engineer responsible for bicycle and pedestrian planning now on board, this is more possible than ever. Bike St. Louis isn’t working. A joint partnership between Great Rivers Greenway and the cities of St. Louis, Clayton, Maplewood and Kirkwood.

Collaboration is good, but the reality of Bike St. Louis is that it’s not really a thing. It suffers greatly from having no group or entity assert ownership. Incorrect and incomplete information abounds on Bike St. Louis material. From the Chouteau bike lanes, to Phase III maps and information not mentioning any plans for the Chestnut Street protected bike lane, which was installed in July, the Bike St. Louis effort isn’t a reliable or useful resource. BikeStLouis.org currently redirects to a Great Rivers Greenway page titled “Learn Stuff”, about basic skills and safety. 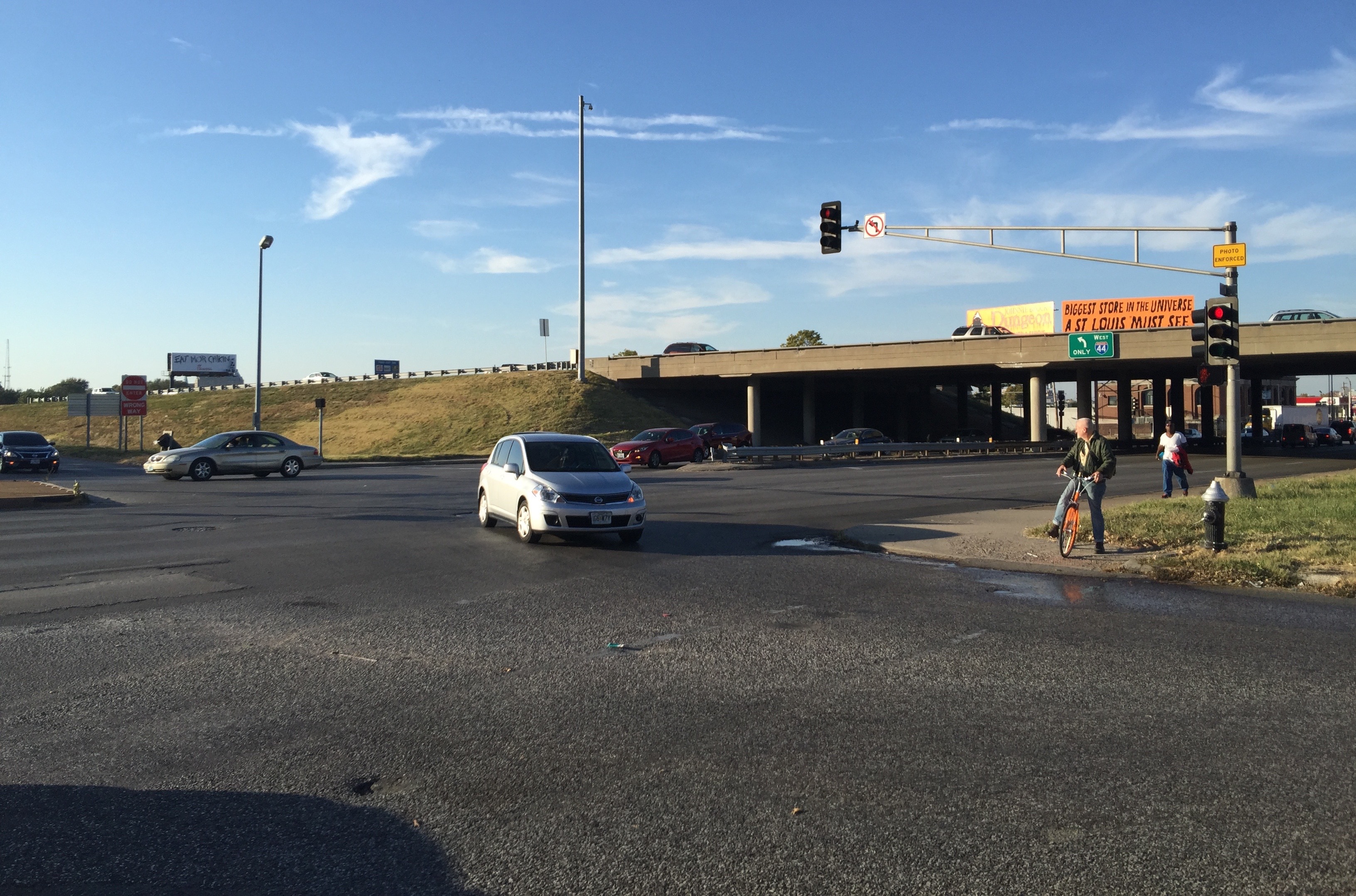 Ultimately, the bike lanes will be as useful as their connections. To get places, a cyclist doesn’t just cruise along straight stretches of streets, but traverses intersections, weaves through neighborhoods and finds a route to avoid highways, rail yards, etc. Many using the Chouteau bike lanes will also ride Jefferson Avenue (at I-44 above).

And Chouteau has the potential to be a high-traffic cycling corridor as it links The Grove/Forest Park and points west to the Saint Louis University Medical Campus, Grand Avenue – north to the main SLU Campus and Grand Center arts district – south to South Grand and Tower Grove Park, The Gate District, Lafayette Square, Downtown and Downtown West, and Soulard.

For Chouteau, the west end works alright. Once one crosses Vandeventer, The Grove is an easy place to ride. Manchester can be busy, but the design slows traffic to a reasonable speed. Further east, Jefferson is a mess, with a badly faded and uninviting bike lane north, and six lanes of traffic south. I wouldn’t blame anyone for not riding (or walking) due to the horrible experience here, but people chose (and have to) do it daily. They deserve more. 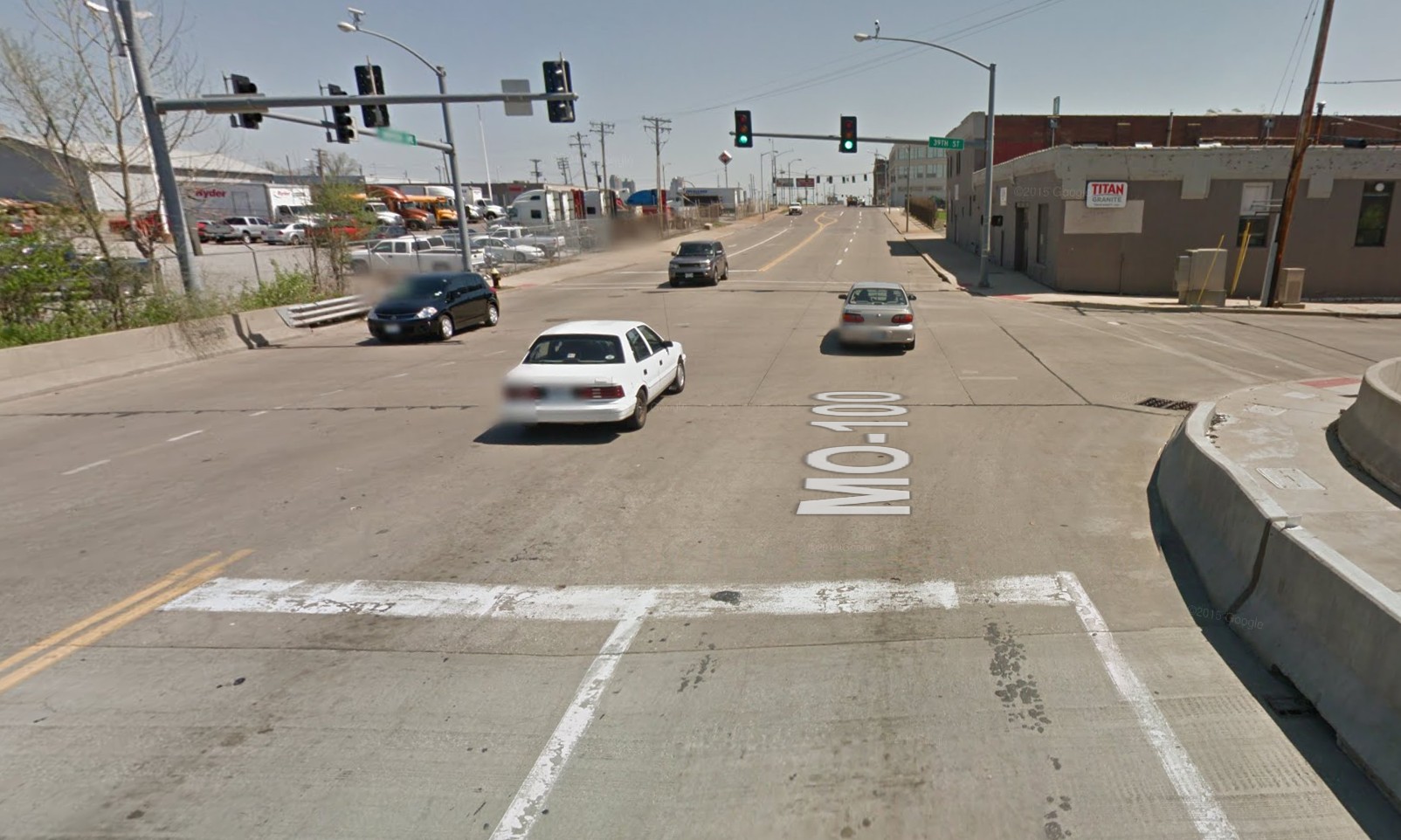 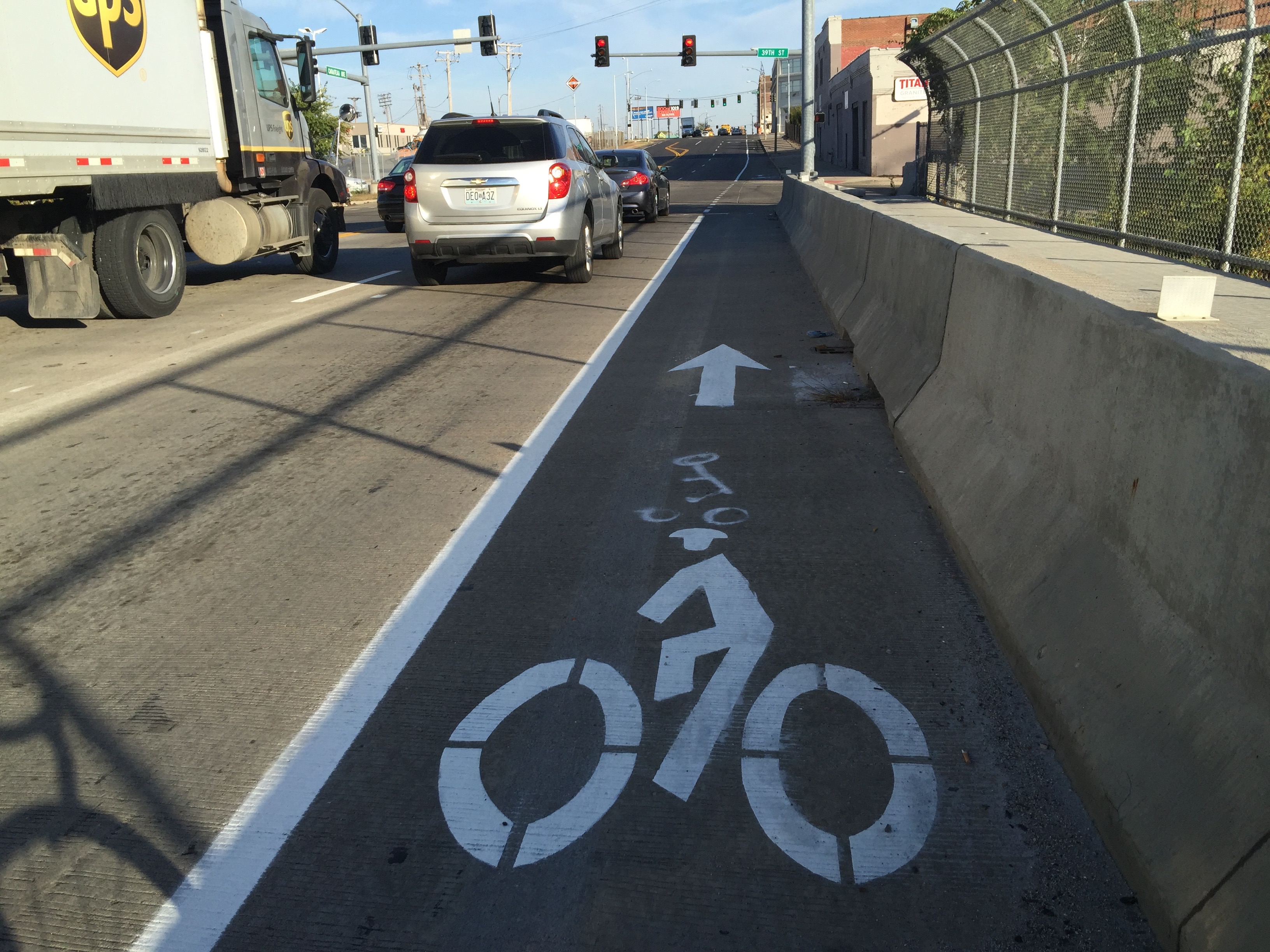 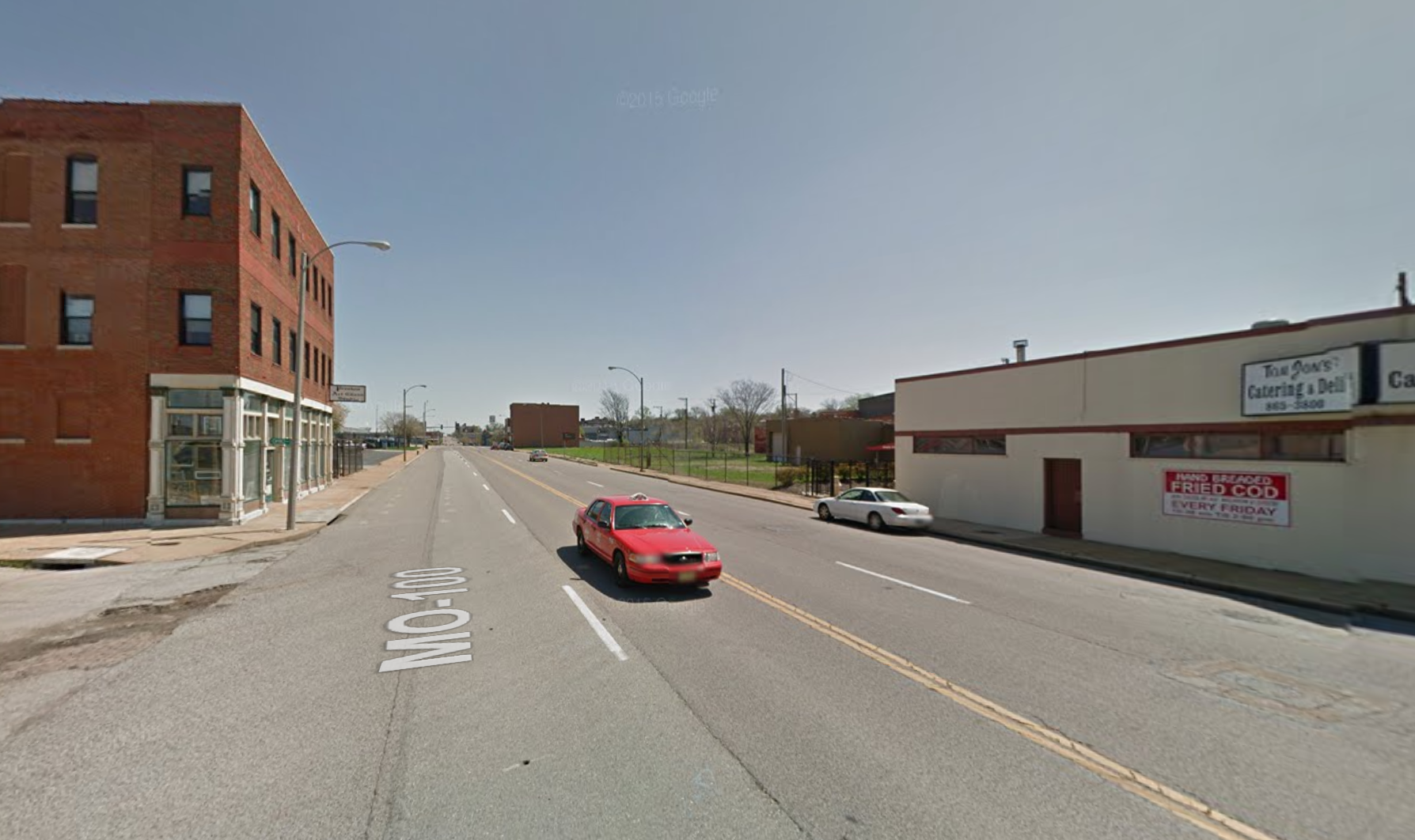