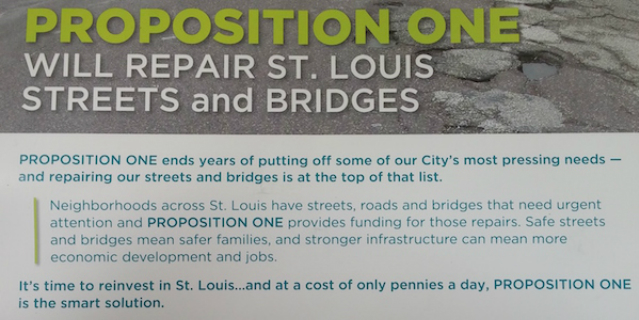 Trust. It is the single most important component of a successful democracy. People must have trust that government is working for the people and by the people in order for a true democracy to function. In St. Louis, we’ve shown we rarely work for the people and mostly are not representative of the people.

Trust, or lack-thereof, is a theme we have heard on a recurring basis over the last year. Most of the local and national dialogue has been about a lack of trust between police, the law enforcement arm of government, and the communities they serve. However, what the failure of Prop 1, the $180 million bond initiative in St. Louis, shows is a larger problem with a lack of trust in our entire governmental system. Those of us in elected office must acknowledge that we have been put on notice. On August 4th, the people of St. Louis came out and said ENOUGH!

I don’t take offense to the lack of trust. We in government have certainly have done little to build the faith of the citizens of the City of St. Louis that government is really working for the people, and not for special interests and the 1%.

We Need to Do Better.
Just in the last couple months, we have mortgaged two city buildings to the tune of $20 million to give profits to a developer with a lack-luster record while refusing to have the political courage to raise the minimum wage for the working poor in the City of St. Louis.

We have circumvented the people by securing private grant funding to implement the Real Time Intelligence Center without having a community conversation about its impact on civil liberties or the development of a comprehensive public safety plan with community input. At the same time, our murder rate continues to climb.

We continue to hand out tax abatement after tax abatement to major companies and developers who are not doing work in blighted areas while cheating the city of we-don’t-know-how-much-because-it’s-not-tracked tax dollars.

We have ruled that the proposed new stadium is “adjacent enough” to the current stadium that the bonds for the stadium we are still currently paying on can be extended without a vote of the people.

We hold a special election, which are historically low-voter-turnout elections, in hopes of passing a bond issue without informing the people (other than through vague mailers with platitudes and stock photos) of what is really in it.

At the same time, study after study has been released about the fact that 40% of children in the City of St. Louis live in poverty, and we are in the top five cities in the nation with the worst income disparity between African Americans and Caucausians. Day after day for nearly a year our most disenfranchised have taken to the streets asking government to work FOR them. We have ignored the requests.

It’s not surprising that the bond would fail too. After all, how we can expect the community to have our backs if time and again we show that we do not have theirs?

A Path Forward.
So what’s next? Where do we go from here?

First, admit the err of our ways. We need to admit our failures as a government and make a genuine commitment to change. We need to acknowledge that we have not been working for all members of our community, especailly those with the least access to a seat at the table.

Second, increase transparency. We need to be more transparent in our decision making. We need the voting history of all members of the Board of Alderman published on-line within 48 hours of each vote.

Third, increase fiscal accountability. We need to scrub our city budget, identify inefficiencies, and develop mechanisms for streamlining duplicative services. We need to increase coordination between city departments and become proactive rather than reactive in our delivery of services. We need to include fiscal notes with all legislation passed by the Board of Alderman. We need a comprehensive accounting of all the tax revenue we are foregoing as a result of abatements and incentives and set caps in non-blighted areas.

Fifth, develop a GO Bond that will pass. We need to acknowledge that we do have significant capital needs that need to be met. We need to pass a bond, so we need to go back to the drawing board. We need to develop a bond measure with a complete public accounting of all expenditures. No pork. No possibility of McKee profiting. No possibility of stadium funding. No vague “technology upgrades” for police. Nothing that is going to continue to strain the relationship between government and the people we are elected to serve. We need areal, transparent bond measure that shows a commitment that government is working for the people.

We need to live by our commitments. Nothing less.

*this item first appeared at medium.com and reposted with the author’s permission

Megan-Ellyia Green is the 15th Ward Alderwoman for the City of St. Louis. A past Coro Fellow, she earned a Master’s Degree in Educational Leadership from St. Louis University and is in the final stage of completing her PhD in Education Policy. She was elected to office in a special election in October 2014 and later re-elected in March 2016. She is currently running for President of the Board of Alderman.