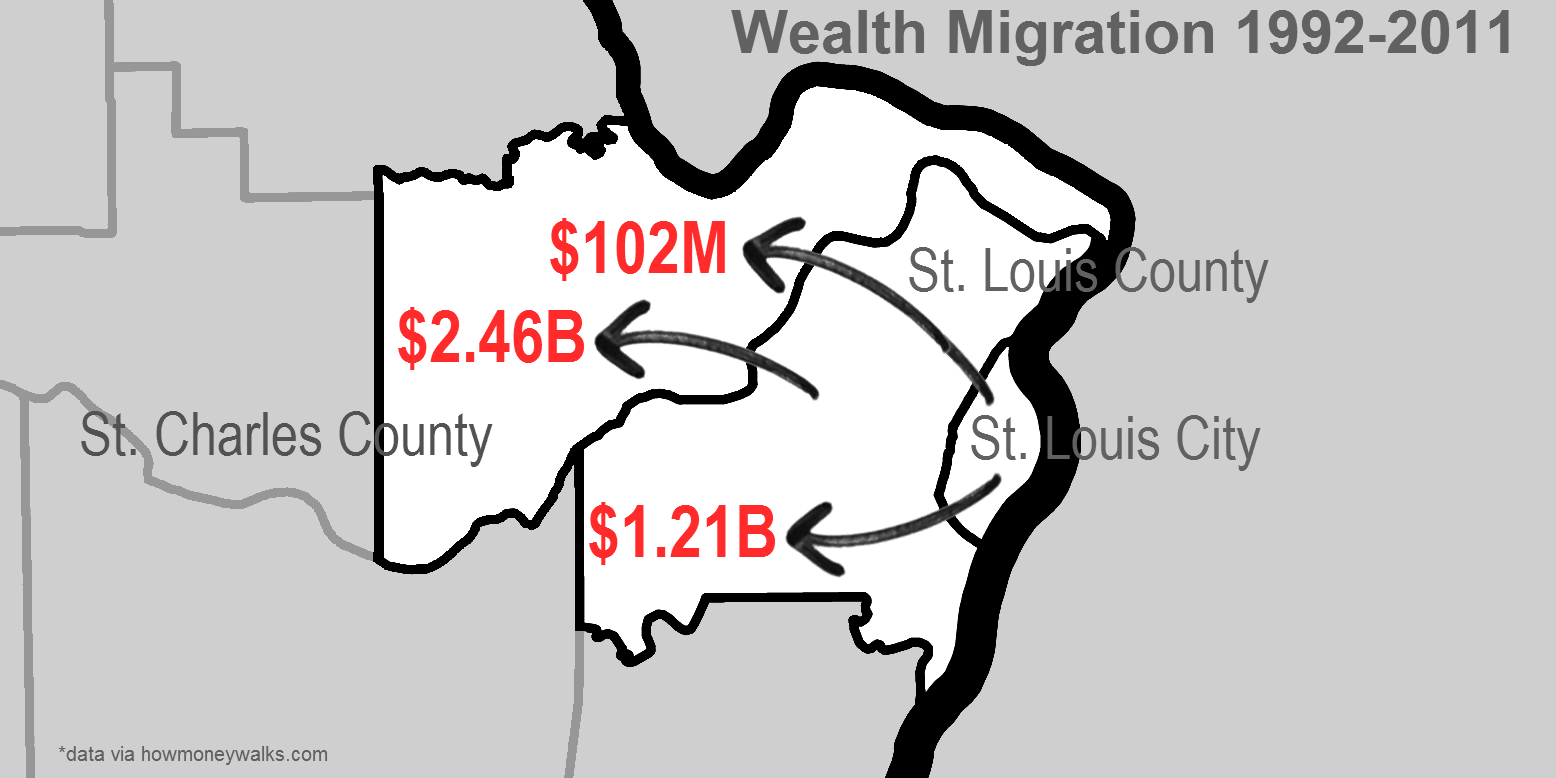 Many towns in St. Louis County are stagnating. Their fragile auto-oriented built environments are under constant pressure from the rip tide of sprawl fueled by infrastructure subsidies on the edges of the metro area. The sprawl ball keeps on bouncing, landing in St. Louis County for most of the last century making it easy to celebrate the new, often at the expense of the separate city, and ignoring mounting liabilities (Metropolitan Sewer District $4.7B, water $680M, etc).

Over the last few decades increasingly that “growth” has occurred outside St. Louis County. Since 1970, the county has seen little population growth. As population and wealth leave the county, we see more and more signs of desperation. Many towns have plugged budget holes by raising sales taxes and using Tax Increment Financing to lure the next big box away from another town. Reliance on sales taxes has been a poor bet. 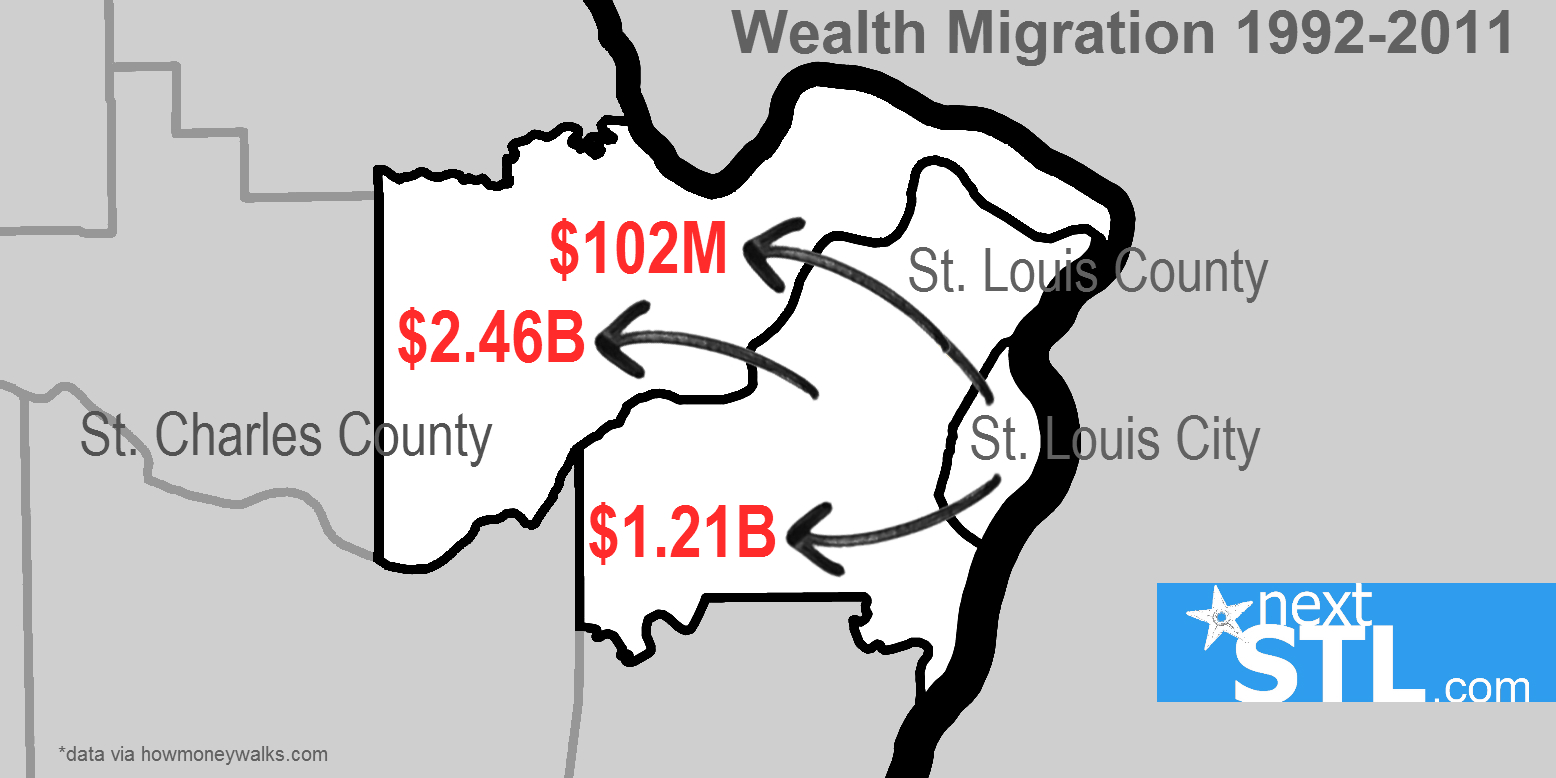 Municipalities that have lost the TIF wars or who can’t play altogether refuse to give up. They found a way – extract revenues via court fines and fees. Rev B. T. Rice has been sounding the alarm for years. Arch City Defenders, in response to its work helping people deal with municipal courts, has published a report focusing on three St. Louis County municipalities: Bel-Ridge, Ferguson, and Florissant. The report was nearly complete before August 9th and released it just as protests ignited after the police shooting of Michael Brown in Ferguson.

The picture became clearer as to how the frustration among protesters goes beyond the latest shooting. Arch Defenders is now suing the village of Bel-Ridge, claiming it lost jurisdiction over traffic offenses because it didn’t submit financial reports to the Missouri auditor’s office on time. Radley Balko of the Washington Post penned a devastating indictment of the system in September and followed-up last week in reaction to criminal defense attorney David Menschel’s live-tweeting from two of the municipal courts. Both are must reads. The Making of Ferguson by Richard Rothstein and the book Mapping Decline by Colin Gordon chronicle how government housing, land-use, and transportation policies shaped St. Louis and contributed to present-day circumstances.

The local group Better Together recently examined all municipal courts in St. Louis City and County. It found the county’s 90 municipalities, despite being home to just 11% of Missouri’s population, took in 34% of all court fines and fees in the state in 2013. Better Together also showed that in Ferguson, as assessed property values plummeted during the recession, court fines and fees skyrocketed, up 84% 2010-2013. 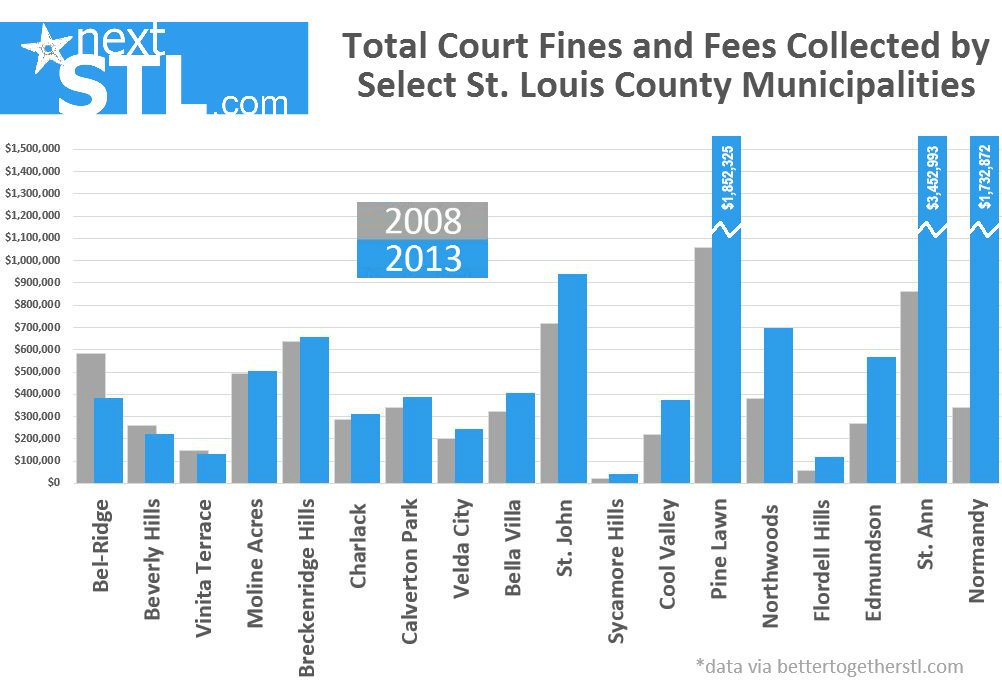 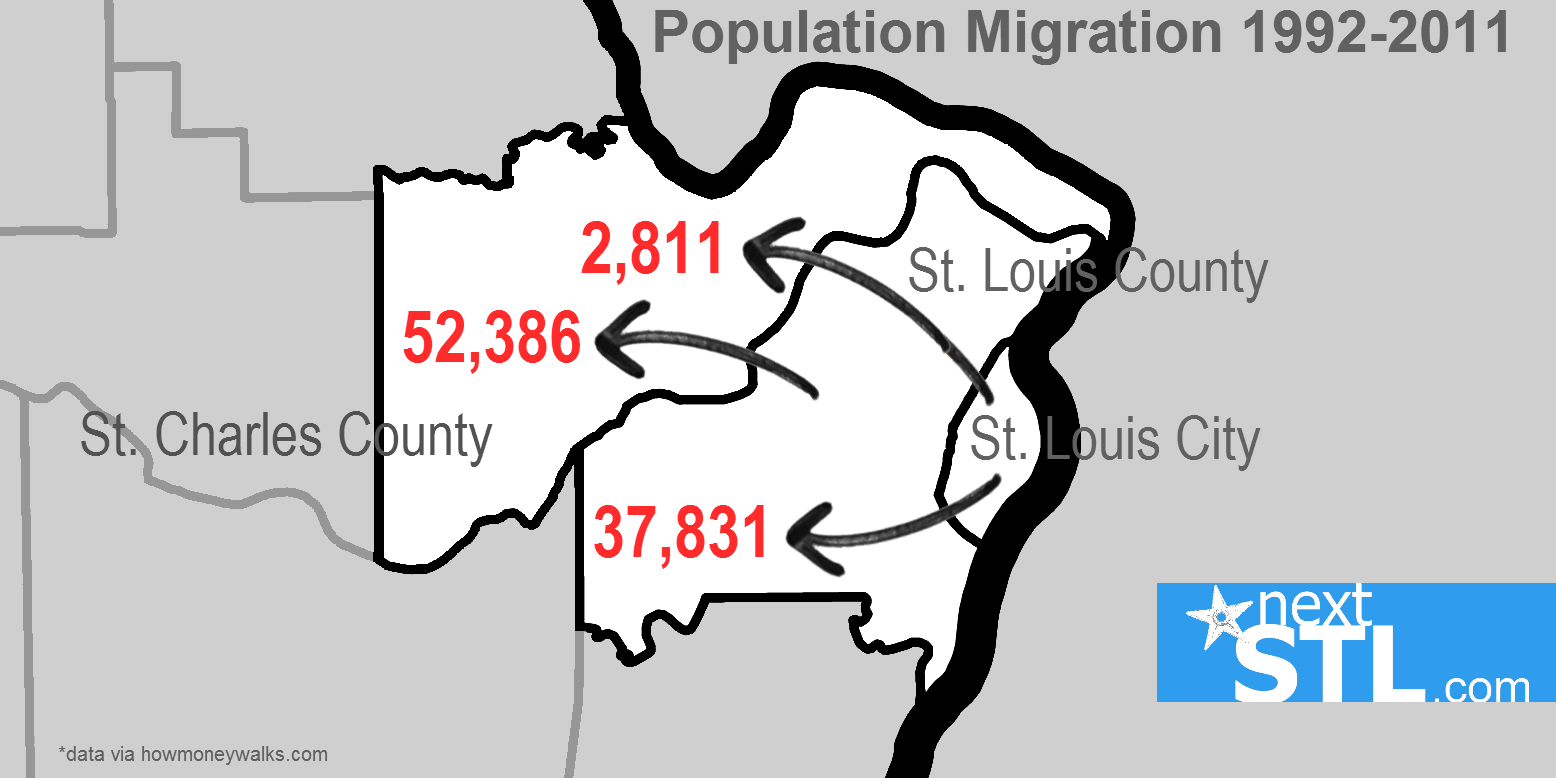 {wealth migration is one outcome of population migration}

Tax increases require a public vote due to Missouri’s Hancock Amendment, which imposes limits on revenue increases. A tax increase is politically tough, let alone asking for additional taxes when it’s clear previous taxes have not been enough. Court fines and fees do not face the same limitations. They can keep going up and up. This allowed some towns to survive the recession. What will they do to survive the next one?

Where will the next revenue stream for these struggling municipalities be found? Sales tax revenue is down, and places like Chesterfield, where two massive outlet malls were recently built, are fighting to hoard every bit for themselves. Court fees and fines cannot continue to grow as population and wealth flee. Property taxes are being decimated as well. Earnings taxes are banned by statute. 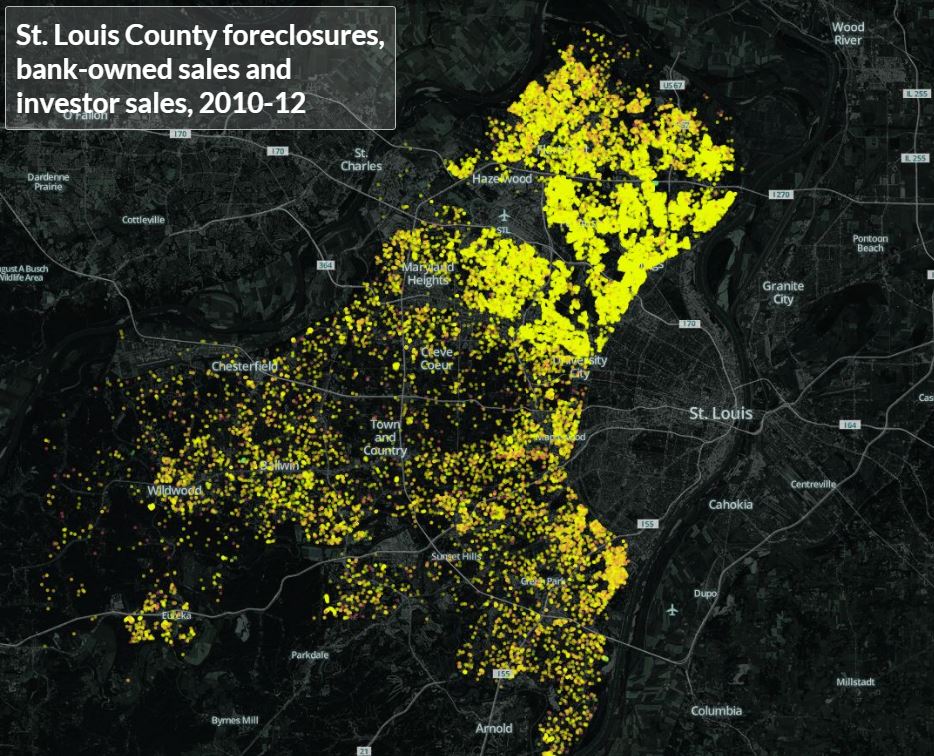 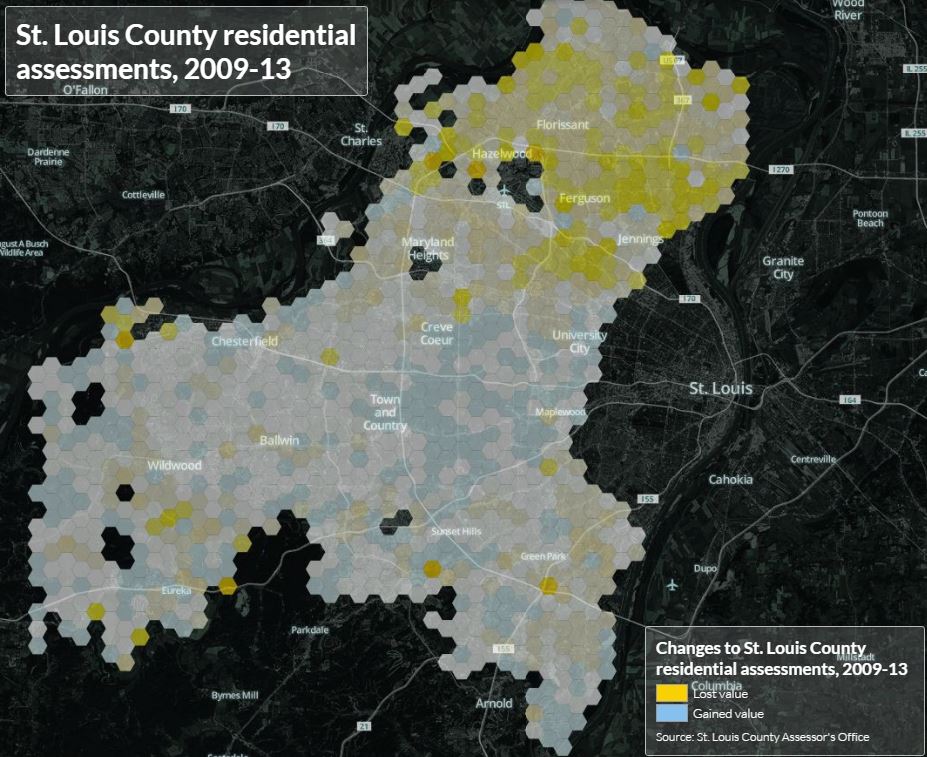 The built environment of our suburban landscape requires increasingly massive reinvestment. Some places appear able to pay these balloon payments on aging roads, bridges, water pipes, and more. Other places continue to see disinvestment. The St. Louis region is too diffuse for public transit to effectively serve areas such as North County. Areas of growing poverty are car-dependent, an expense that perpetuates economic hardship.

{Lindbergh and Page. Drive or take the bus? From Google Streetview}

Some cities are coping poorly with overwhelming challenges, with few options to confront them. Rather than giving up, they turned to the most tyrannical and dysfunctional way imaginable to shore up finances. Perhaps court fines and fees should be pooled. Or fines derived from violations on state roads should go to cash-strapped MoDOT to maintain them. Or maybe, just maybe, some of these towns should merge or disincorporate. 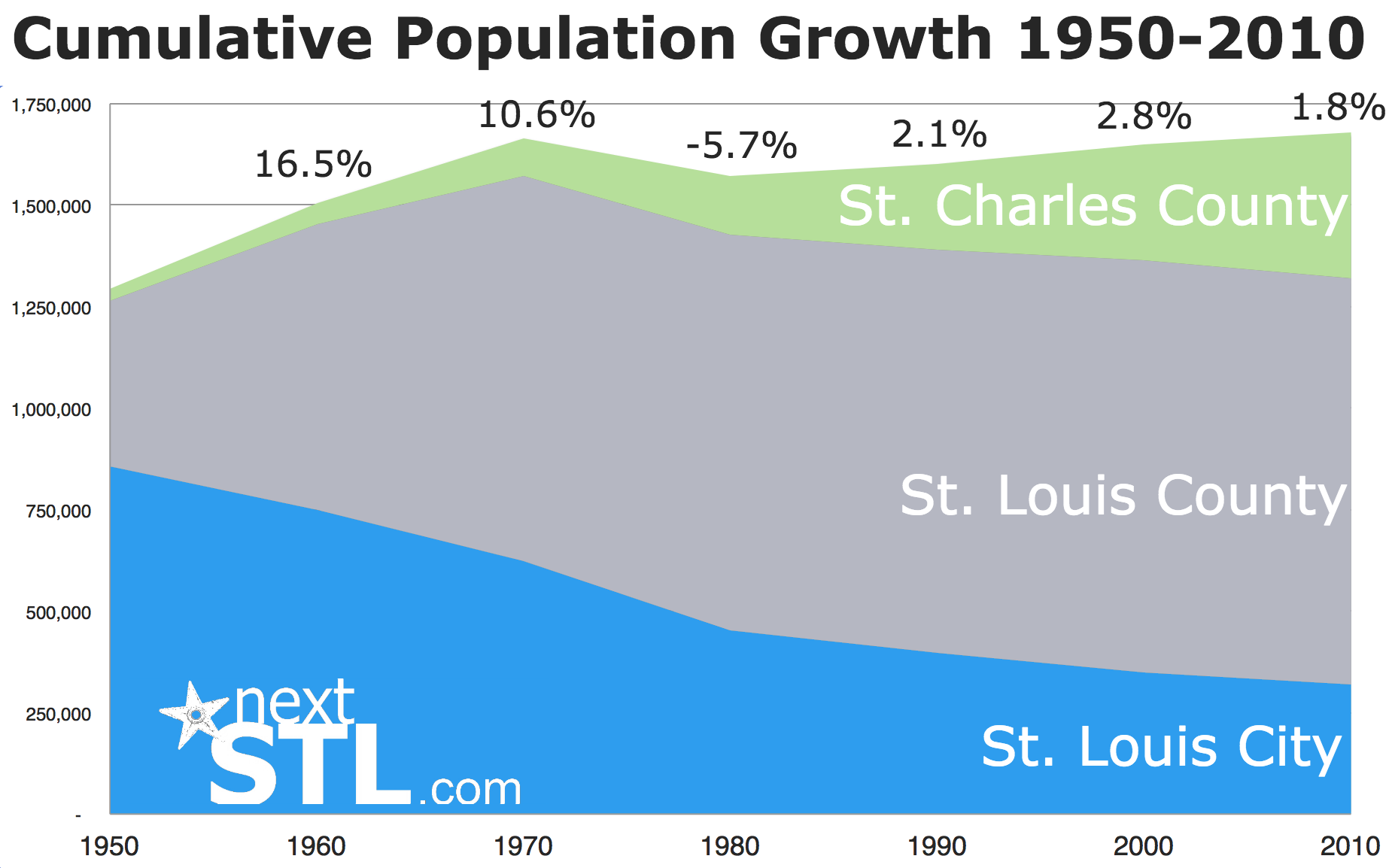