Many of the municipalities in the region are failing or stagnating. The failing ones are easy to spot. They can’t feed their prisoners. The mayor is caught embezzling. They use speeding tickets to fill budgets. Their population is dropping. Wealth is fleeing. Empty housing, retail, offices, and factories dominate. These are the apparent signs.

What is less obvious are the ones stagnating. Their populations aren’t growing, their land is built-out, their housing stock and population are aging. A mall dying, a big box leaving, or a declining school district could send them into a downward spiral. Popular perception may be a healthy one, but let’s look closer.

I’m using numbers from Ellisville, not to pick on them, they are heroes in my book for fighting the temptation of a TIF, but because they share useful data. A pitfall of transparency, I suppose. 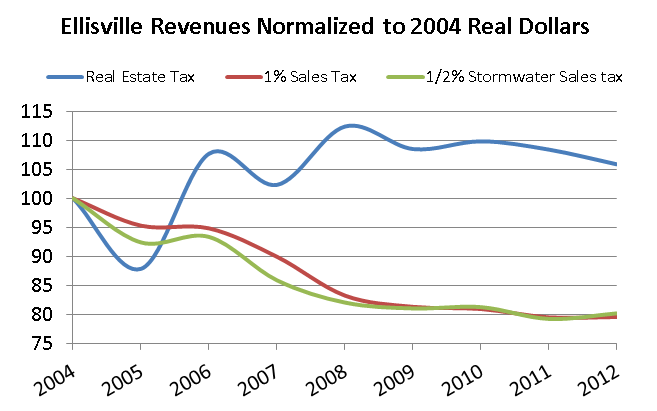 Property taxes have been volatile, but have beaten inflation. Sales tax collections have fallen precipitously. In addition to the two sales taxes displayed, Ellisville now has a 1/2% Capital Improvements Sales Tax (added in 2011) and a 1/4% Parks Sales Tax (added in 2007). These four together raise 53.8% of Ellisville’s revenue. Had they kept up with inflation, they would have raised 20% more in 2012. No wonder they’ve added two new taxes recently. The prices of things have kept up by definition, but the total amount sold in Ellisville has not.

This reveals how the reliance on sales taxes has left Ellisville vulnerable, and why a new Walmart was attractive to many, no matter the subsidy offered. Vulnerable to Internet sales, vulnerable to shifting consumer habits, vulnerable to the TIF wars, vulnerable to the transportation and housing subsidized hyper-horizontal development pattern. I suspect a similar story could be written for many of our cities (Sales taxes are 44% of Crestwood’s revenues down from 56% in 2006, down 33% in real terms or $2.9M). They are in a much weaker position to deal with municipal challenges, let alone meet the usual delivery of basic city services. For example how can a city bond out a project backed by general revenues if there is risk that a big box closing puts a huge hole in receipts?

What to do? The Super Mega Merger may not be the answer, but neither is the status quo. I encourage municipalities like Ellisville to examine their revenues similarly and promote local, regional, and state development and taxing policies that would render them more resilient, instead of hanging on the whim of a national retailer, or slowly sliding into financial crisis.

A Strong Towns post The Problem with Sales Tax