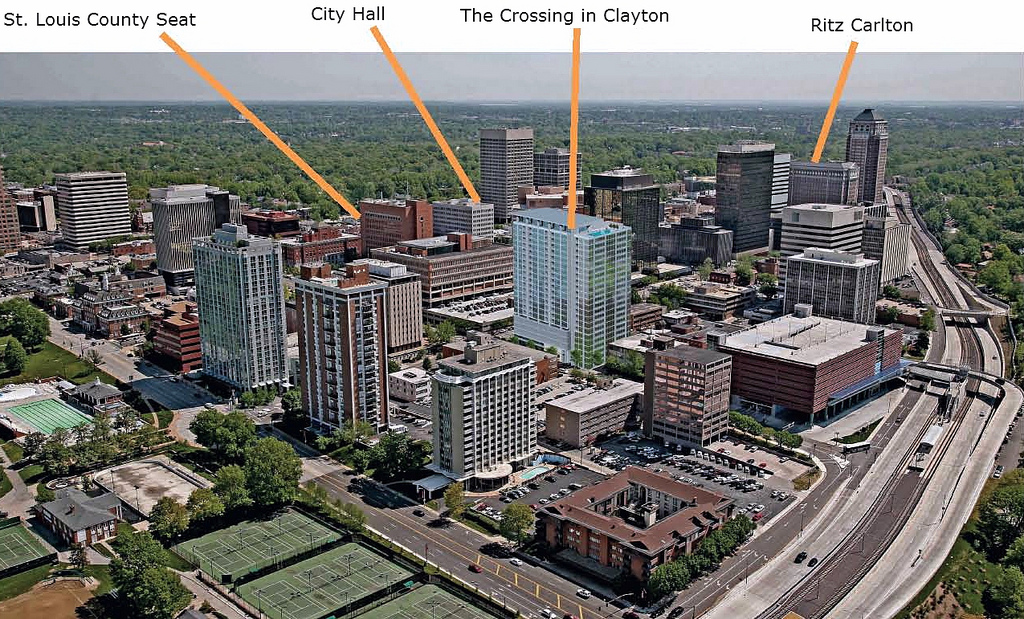 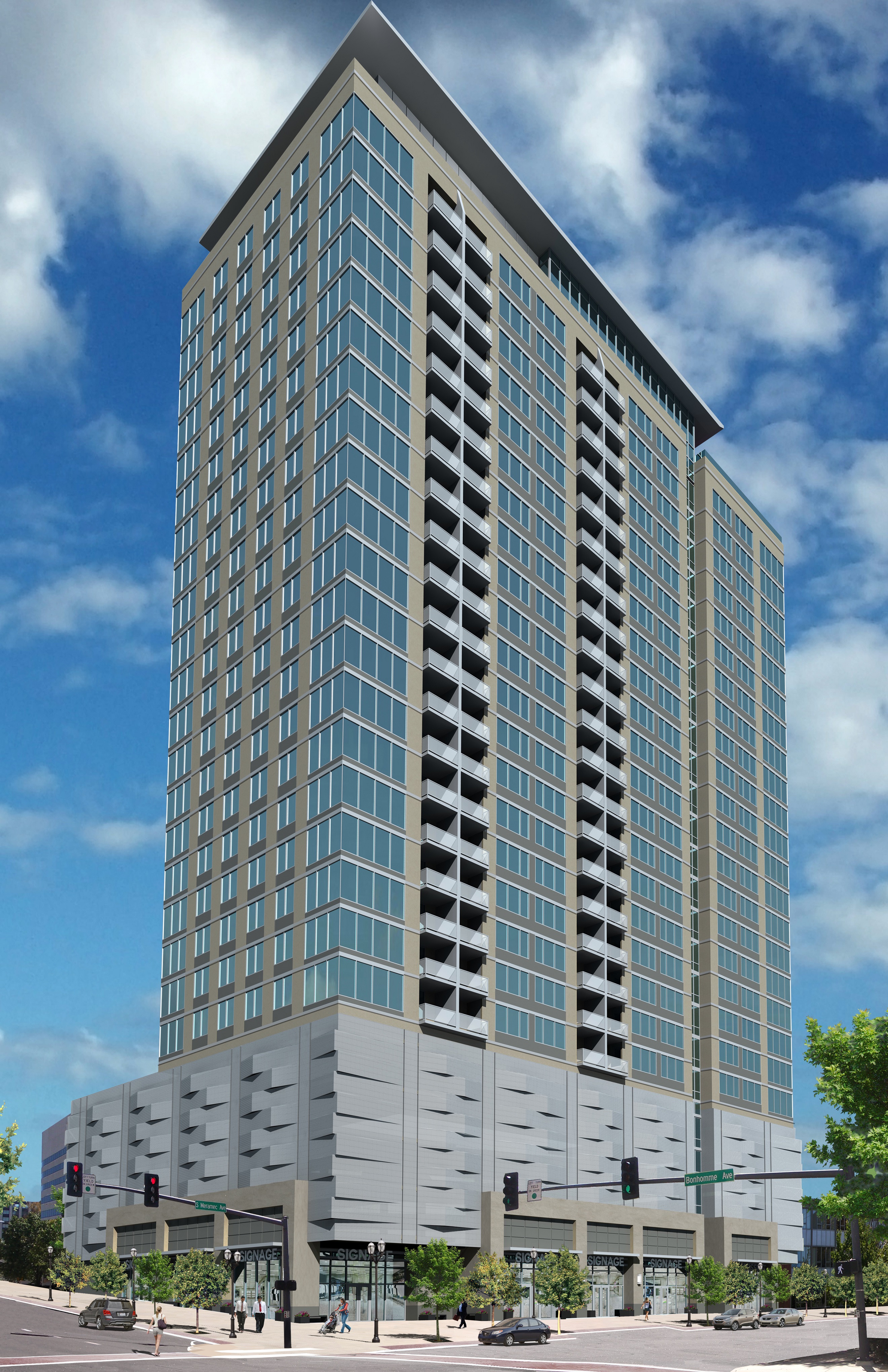 It’s good to have a debate at tax incentives in St. Louis. This, however, isn’t what we have. In Clayton, a developer has dotted its “i’s”, crossed its “t’s”, been subject to no fewer than three levels of municipal review, been presented at numerous public meetings, and received near unanimous approval for a project. But now a small band of opponents and the St. Louis Post-Dispatch have decided it’s time to show up to the conversation. Both groups misunderstand the issues and positions at play.

The Post-Dispatch became interested when tax abatement was approved by the Clayton city council for the 26-story, $72M project known as The Crossing on the southeast corner of Bonhomme and Meramec Avenues. While tax incentives, particularly Tax Increment Financing for suburban retail development, need more scrutiny, the paper seems to gleefully focus on high-rise residential infill and tax abatement in that easy foil of Clayton.

The paper’s most recent piece is its eighth story, and second editorial on the issue. Yet, they still get a lot wrong. “They gave in to a prospective developer who wants taxpayers to help finance a $72 million, 26-story luxury retail and residential tower.” This is simply wrong. Tax abatement does not equal taxpayer financing. But one needs to examine the details of a project to understand this.

The Post-Dispatch states that tax abatement isn’t necessary because “a variety of upscale residential buildings have been built in the city without help from the taxpayers.” The last significant residential development built in Clayton was Maryland Walk, which opened in 2006 and after a fast start, saw sales of the up to $1.4M units stall at the start of the Great Recession. A handful of units remained unsold for years. Other proposals, such as Trianon, have come and gone.

The paper contorts itself to justify the $22M tax abatement provided to Centene. “Jobs were at stake”! That abatement is nearly three times what has been approved for The Crossing. And it’s less than clear that an office building, parking garage and restaurants benefit Clayton more than adding ~400 residents to its downtown. While it may be easy to point and say there’s a market for development in Clayton, there are acres of vacant land, surface parking lots, and dozens of empty store fronts that tell a different story.

Opponents question weather the development will be successful. Who would live in a relatively small, expensive apartment near the MetroLink line (the project would include the relatively small number of 212 parking spaces)? It all seems rather un-Claytonlike, they think. NIMBYs like to play developer. Developments and developers do fail, but that does not equal a failure for the city. The Roberts Tower in downtown St. Louis is just one such example. The Roberts brothers lots millions on that building. It’s sat vacant for years. It’s also a significant asset for downtown.

The paper notes that the project has “drawn fire” from nearby residents. If you’re interested in the NIMBY (Not In My Back Yard) phenomenon, tune it. Those gathering signatures and trying to stop this development, while threatening to vote the mayor and others out of office, include in their complaints that the new development would change the view from their luxury abodes, and that there will be more cars on Clayton streets. They also falsely present themselves as defenders of the sacrosanct Clayton schools.

The Post-Dispatch also repeatedly states that the Clayton School Board opposes the approved tax abatement. The paper either didn’t read the School District of Clayton’s remarks, or is willfully ignoring a much more nuanced position. The school district adopted an official position on economic development incentives (EDIs) in 2008. It states that EDIs shouldn’t be used for residential development. That seems clear, but read the statement submitted by the district, and you better understand its position on this development.

The school district’s submitted remarks state the official position while qualifying that it supports the Clayton master plan, that each EDI decision should be considered individually, that tough decisions are sometimes required, and that whatever the outcome of this particular tax abatement, it understands that the issue has been thoroughly vetted and discussed. The district even offers several of its own recent difficult decisions that it highlights were unpopular to some (putting the Maryland School on the market, and building a new middle school on a small site). The School District of Clayton may have restated its official position, but it’s disingenuous to present it as an opponent that wants to see the tax abatement fail. The school district is saying, “our policy says X, but we understand if you go against this.”

The premise of a school district opposing EDIs for residential development is that new students could be added to the district without a like increase in tax revenues. The 250 residential units here, mostly 1-2BR, would likely add few students to the school system. At the same time, the project would generate an estimated $16M in property tax revenue over the first 20 years. According to projections, after abatement the school system would receive $4.1M over 20 years, or $3.1M more than without new development. The Post-Dispatch not only doesn’t offer these numbers for consideration, it only mentions that “supporters” say there will be increased revenue.

The pertinent question here is whether the new tax revenue would cover any new students. Regardless of any other ancillary economic benefit, and other entities (the city, state, sewer district, library, zoo, etc. would receive more revenue as well). This appears very likely to be the case. In total, after abatement the project is projected to produce $8.6M in property tax revenue over 20 years, as opposed to $1.4M over the same period from the current tax base.

As we begin to recognize some of the significant problems with the way EDIs are thrown around the St. Louis region, it matters that we understand the differences among the many incentives, and projects. Clayton finalized a master development plan in 2010 that called for increasing residential and retail density in the city’s central business district. Both residential and retail would help Clayton be more economically sustainable. It’s not clear that this master plan can be effected without EDIs.

The Crossing would be the first significant new construction apartment project in Clayton in decades, and as such represents an important first step in diversifying housing options in the city. Clayton needs more people, more residents, more businesses, and more variety in each. It’s negligent to only view Clayton through the metric of median income, or third grade test scores. Communities don’t stand still.

This development will continue to add wealth well beyond the 20 year abatement period. This is more true of residential development than either retail or office, which are more likely to turn over and ask for additional subsidy as soon as the first subsidy expires. We need to stop subsidizing the never-ending next development at the expense of the previous subsidized development.

In the end, this project should be considered for its economic impact, and not its impact on someone’s view, or through the lens of the economic development incentive boogeyman. What is the cost of added infrastructure around The Crossing development? Virtually zero. Does is take advantage of existing investment such as streets and transit? Yes. The question that matters is whether wealth is being added to the community.

Here, the pace of development matters greatly. If tax abatement would have meant the Trianon condos and associated retail would have filled the grass field next to the $10M Forsyth MetroLink station more than five years ago, can we say it wouldn’t have been worth it? With five years gone, and increased tax revenue in hand, that project would be a significant positive over the annual Christmas tree lot, the only retail activity that takes place on the site next to the Ritz Carlton hotel. Using basic math, a %50 tax abated development today is equal to a non-abated development 10 years from now. Considering the catalyzing affect of development means that the real number may be 7 years or fewer. Opponents of the tax abatement can say that it’s hard to imagine this land going underutilized for long, but the reality is Clayton shows otherwise.

It’s difficult to develop in Clayton. Premium prices are demanded for vacant lots (why many sit vacant for years). Traffic studies are required for everything (even for a grocery story filling a long vacant former grocery store). The Architectural Review Board requests tweaks to this and that. It’s an onerous process. It’s also a very public process, and one that The Crossing has navigated successfully.

At this late stage, opponents have gathered signatures in an attempt to force a public vote to repeal the approved tax abatement. It appears that the issue will not go to a vote, as the city is interpreting the passage of the incentive to be exempt from this process.

The reality? Clayton isn’t a first tier market for developers. If the city is dedicated to its progressive master plan, some incentives will be necessary. The broad ideological anti-incentive brush must consider what type of places we want to build, and what builds sustainable wealth in a community. The Crossing would bring young professionals to Clayton, living adjacent to the region’s $500M light rail investment. This is what we want and need. Residents of Clayton need to recognize that all is not well, that vacant lots and empty buildings are an economic drag, that Clayton can’t be filled with $1M condos, and that the city’s status as the wealthy St. Louis suburb isn’t guaranteed.

More on Clayton: “What’s Wrong With Clayton? That’s Easy, but Does Clayton Care?” 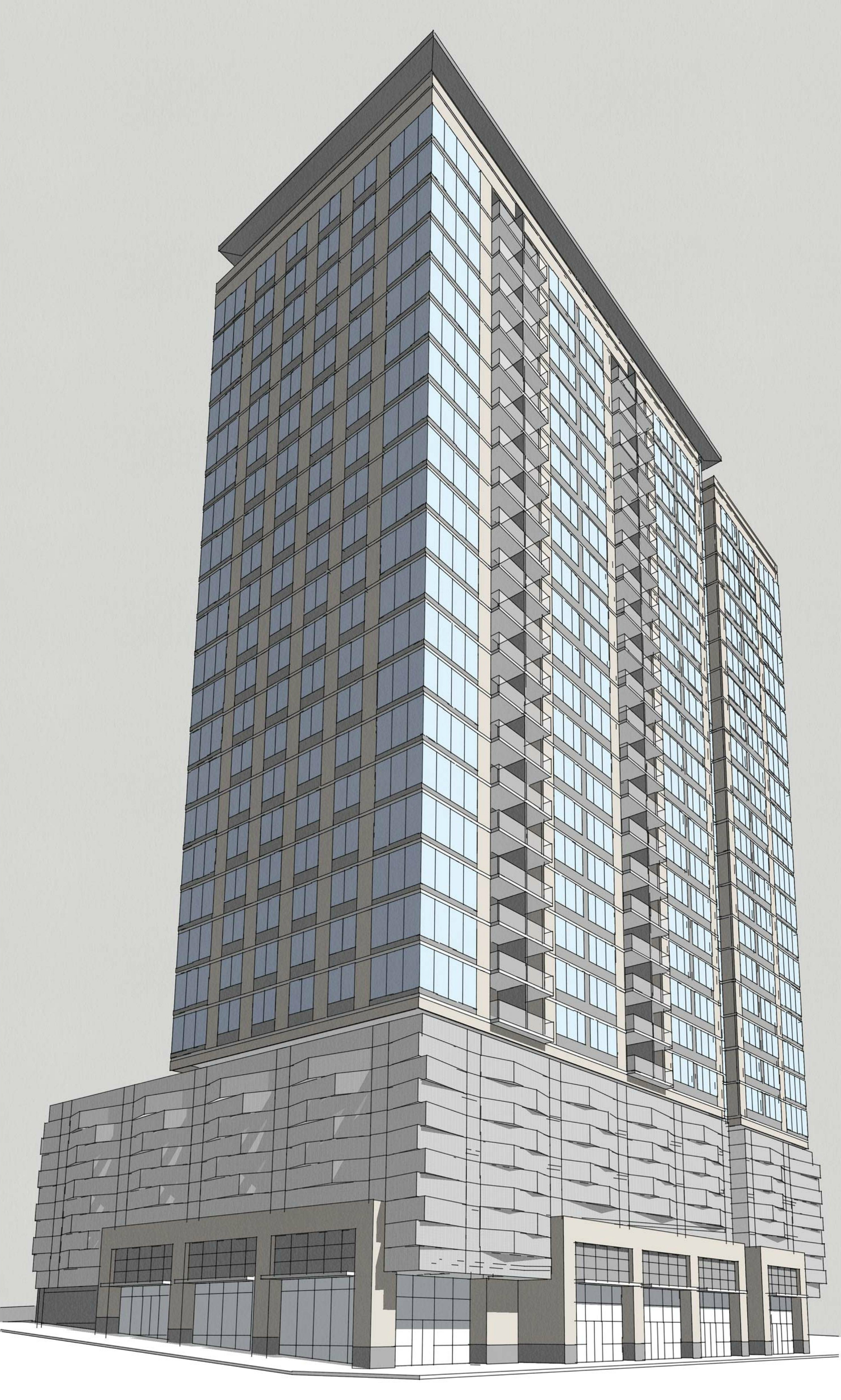 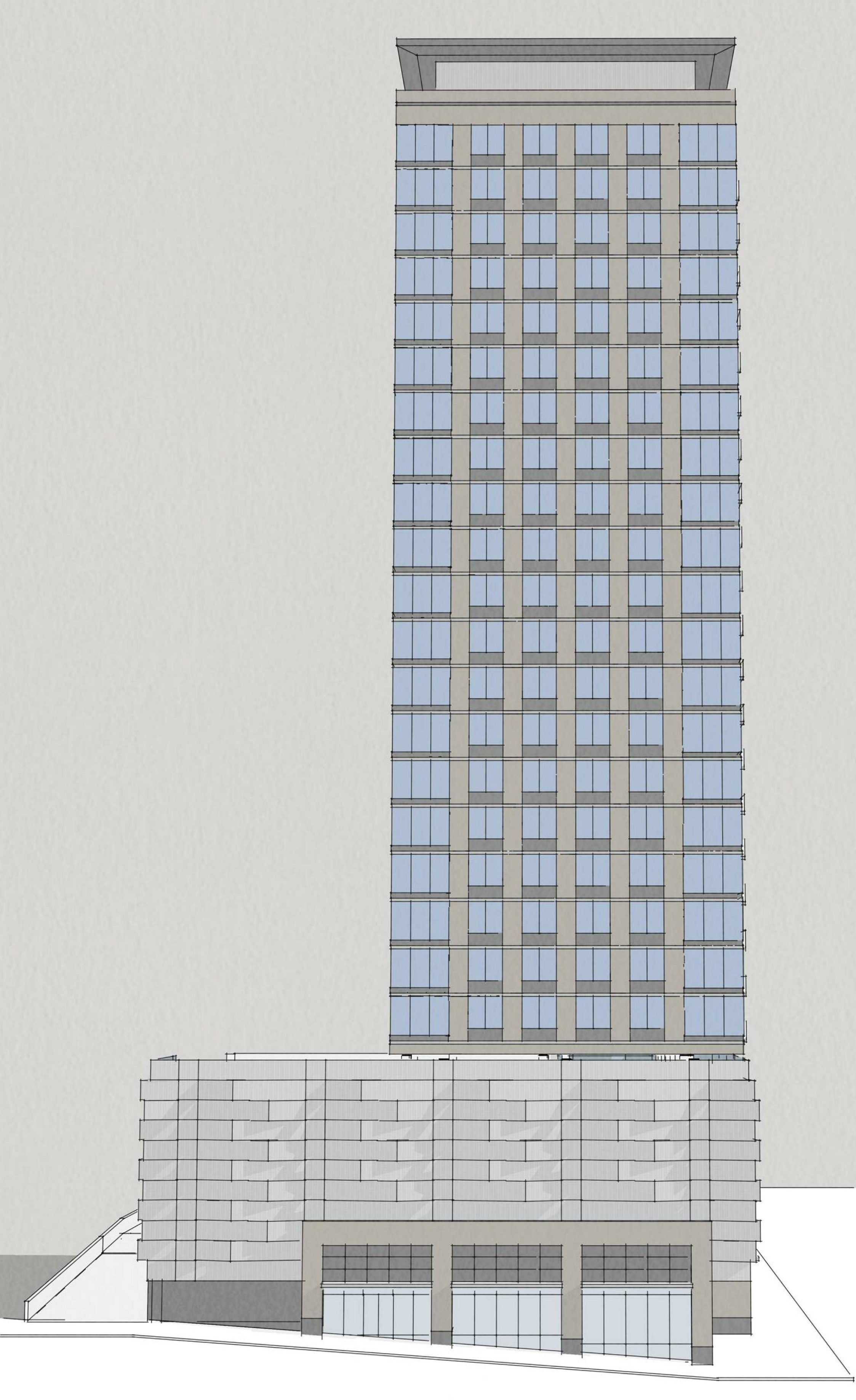 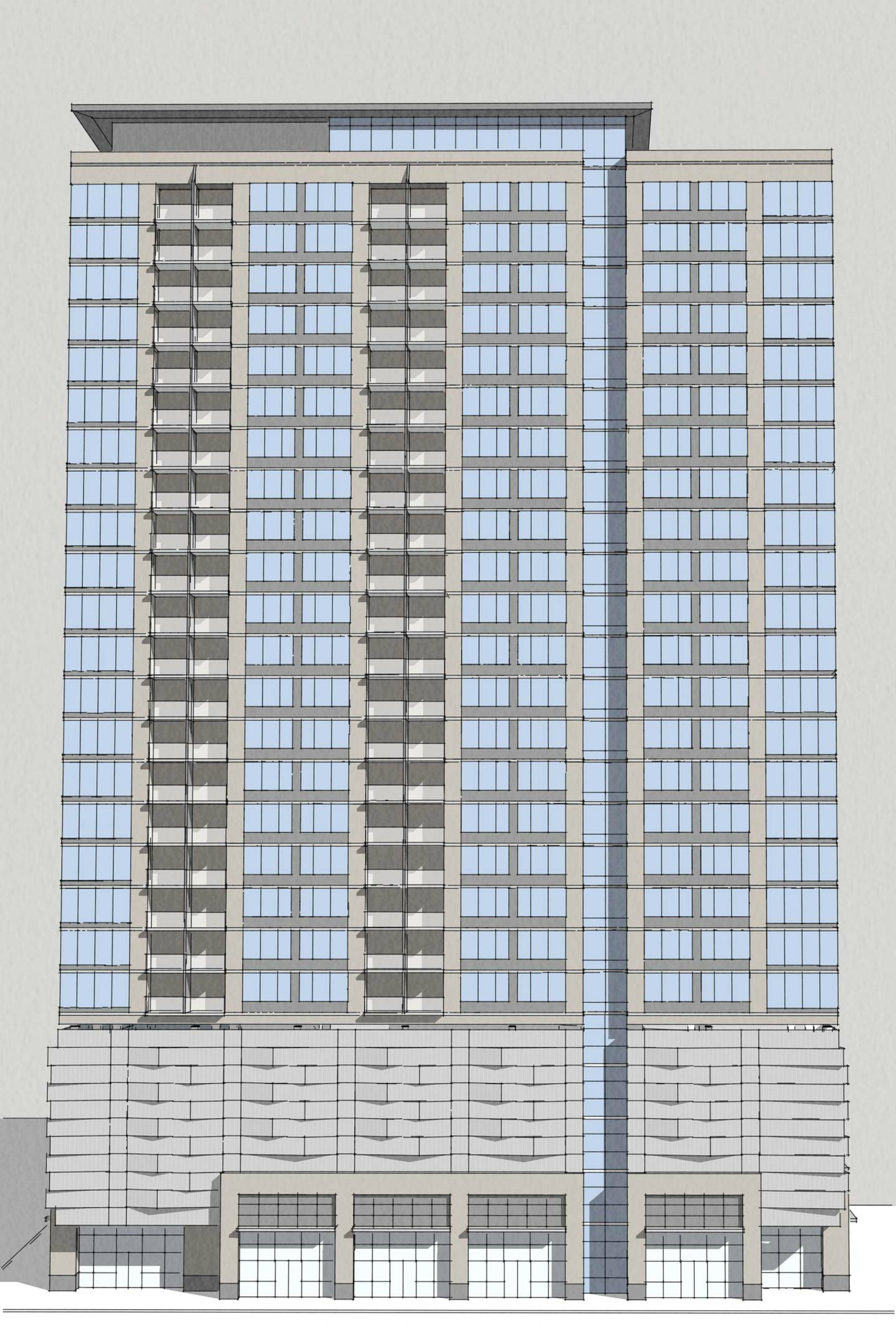 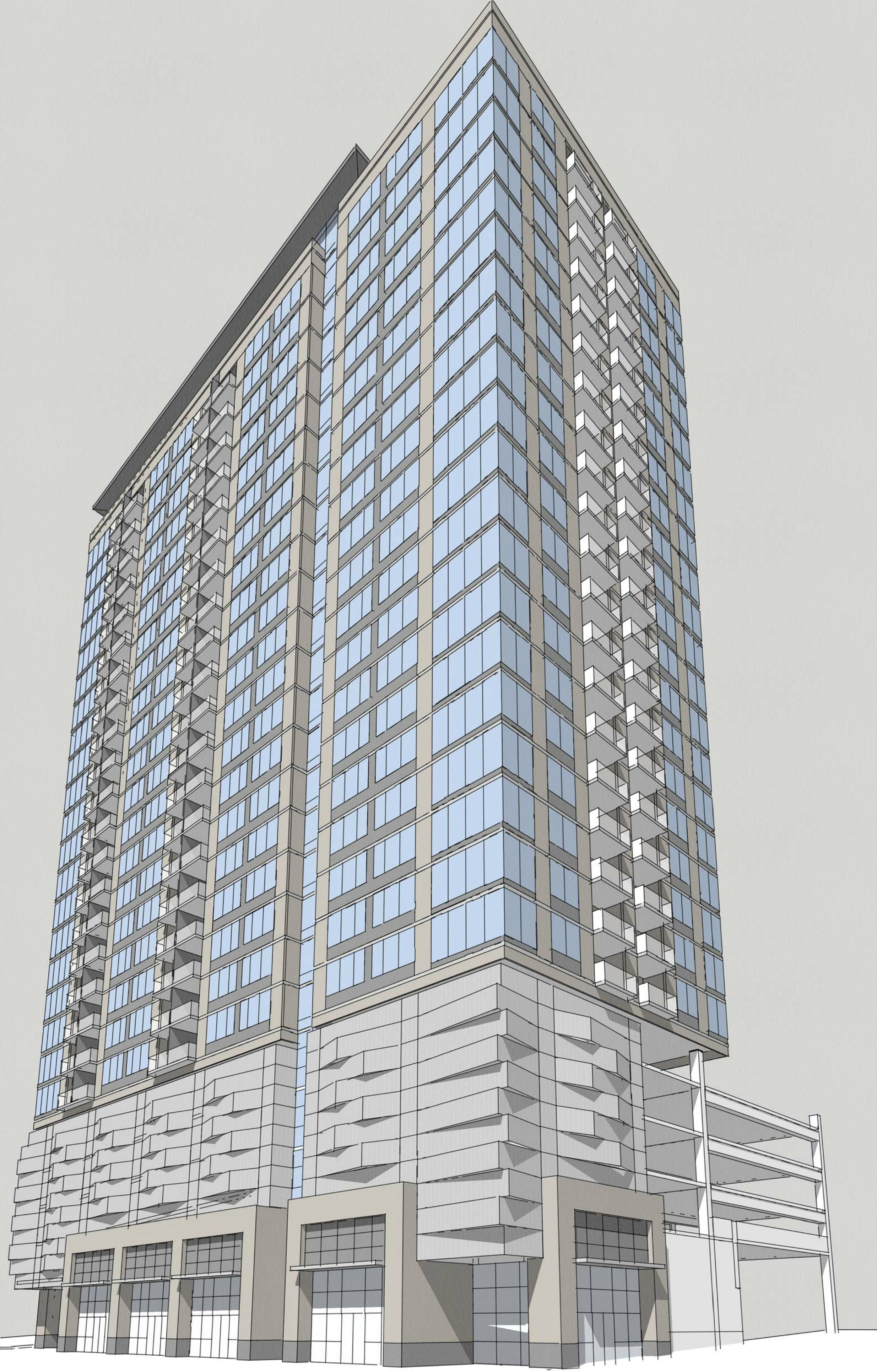