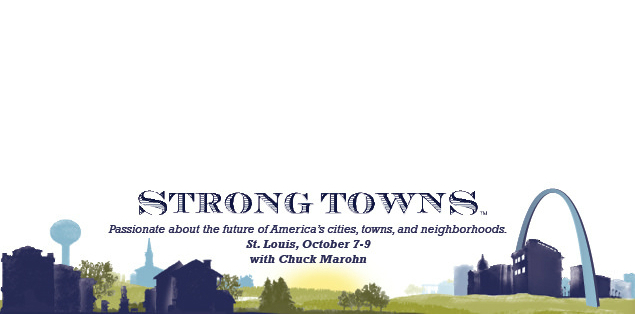 We are excited to announce that Chuck Marohn, president of Strong Towns, is coming to St. Louis! The mission of Strong Towns is “to support a model for growth that allows America’s towns to become financially strong and resilient.” Presented by nextSTL, and made possible with generous support from ISSUES Magazine at Washington University in St. Louis, Better Together STL, Citizens for Modern Transit, and the Urban Land Institute St. Louis, Chuck will be in St. Louis October 7-9.

Transportation in the Next American City
Oct 9 7:30 am Breakfast at the Missouri Athletic Club – Hosted by CMT (Tickets $15 members/$25 non-members) We’re bringing Chuck Marohn and the Strong Towns message to St. Louis because we need to change how we build our places and the policies, incentives, and subsidies that lead to the development patterns we see here and around the country.

Cities grow up, more intense, and out. Since World War II we have incentivized, both intentionally and unintentionally, growing out. We see that through the build-abandon-build-abandon pattern of development in St. Louis. Chuck will show us why this is fundamentally flawed and leaves our communicates vulnerable through mounting liabilities (like overbuilt infrastructure) or putting our eggs into one basket (like malls that die). With the failure of Amendment 7 and as we discuss the way forward, Chuck’s message will be especially prescient.

For millennia our ancestors had to build financially resilient places. If they weren’t resilient, they went away. These places were built on the human scale. It turns out building that way created places that we appreciate today. By building new areas and retrofitting our old ones following a horizontal development pattern, we are digging ourselves a hole we can’t get out of. In Chuck’s presentation, the Curbside Chat, he will walk us through all this with a dash of “Minnesota Nice.” Anyone who cares about their community’s future, no matter where you land on the political spectrum, will enjoy hearing Chuck’s take on how to build resilient communities.

Please check out the Strong Towns website, mark your calenders, and help us spread the word!

A great write-up about Strong Towns and Chuck Marohn on Time.com. And Chuck recently weighed in on Ferguson in a post titled “Stroad Nation,” and on Minnesota Public Radio

My posts on what to do with Crestwood Mall, the cost of parking on Pershing, the slow death by sales taxes, and how our infrastructure investments have made us poorer incorporated Strong Towns thinking.

Bio
Chuck Marohn, PE, AICP, is the President and Co-Founder of the non-profit, Strong Towns. His background as an engineer and planner working as a consultant for dozens of cities and towns across Minnesota gives him an intimate understanding of how land use and infrastructure projects get designed, funded and built. This unique insight across traditional silos is what led him to start Strong Towns in the wake of the national financial crisis that left so many local governments reeling from the sudden halt in development. A nationally sought after speaker, Chuck has given over 200 presentations to public officials, staff professionals and local citizens in the last five years to help them find a new pathway forward.

Chuck and his wife live with their two daughters and two Samoyeds just north of Baxter, Minnesota.