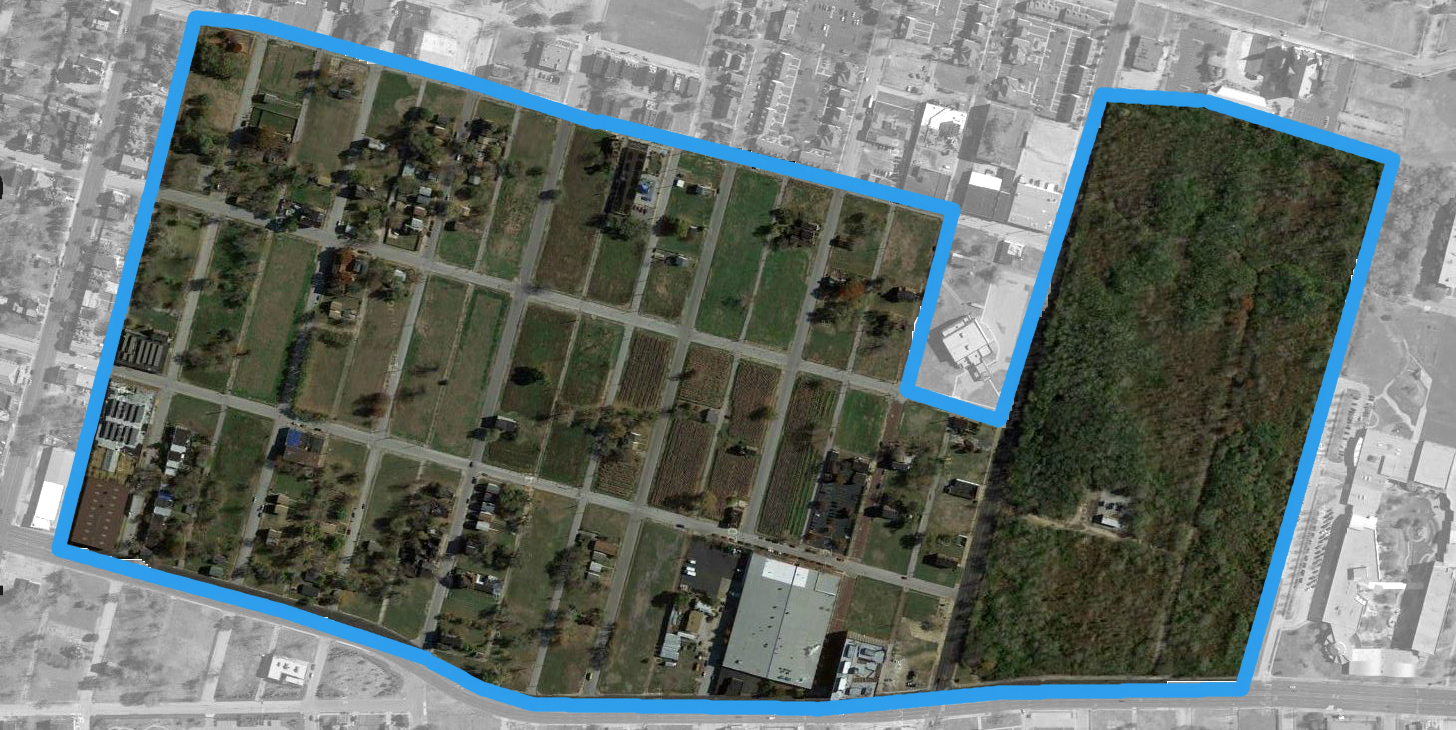 When nextSTL learned that Pruitt-Igoe was one of six sites in the St. Louis area being considered for building a new National Geospatial-Intelligence Agency it kind of made sense. The 34-acre site has been vacant for decades and is much larger than the current NGA home at the historic arsenal on the south riverfront.

The idea that the federal government would redevelop the site that has been synonymous with failed federal government housing policy for half a century even has some almost poetic appeal. But publicly, the NGA has stated that they’re seeking 50 unencumbered acres, 35 buildable acres, and a minimum 500ft setback.

This seemed to rule out Pruitt-Igoe, or at least make it a long shot, requiring the NGA to compromise on its wishlist. Even adding some adjacent land within the NorthSide Regeneration footprint, it seemed a challenge to get to 50 acres and accommodate a significant setback.

As nextSTL noted, the effort by the Mayor’s office to insert $25M into a possible city bond issue for infrastructure improvements near the site was targeted at keeping the NGA jobs in the city. A Post-Dispatch editorial (Pruitt-Igoe is the only site for geospatial agency relocation) went heavy for the idea.

That editorial read in part: “The jobs can’t leave the city of St. Louis. The Pruitt-Igoe site, in the center of the NorthSide Regeneration project that is the dream of developer Paul McKee, is the only choice. “We have to make it really hard for them to go someplace else,” said Mayor Francis Slay this week, in a meeting with the Post-Dispatch editorial board.” The paper’s support appears premised, in various ways, on the idea that 3,000 NGA jobs staying in the city is what’s best for St. Louis and the region.

This still didn’t seem to altogether make sense, until nextSTL learned the extent of the site the city is willing to offer the NGA. The proposed site plan obtained by this site shows approximately 22 city blocks, or 88 acres added to the existing 34 acres at Pruitt-Igoe. 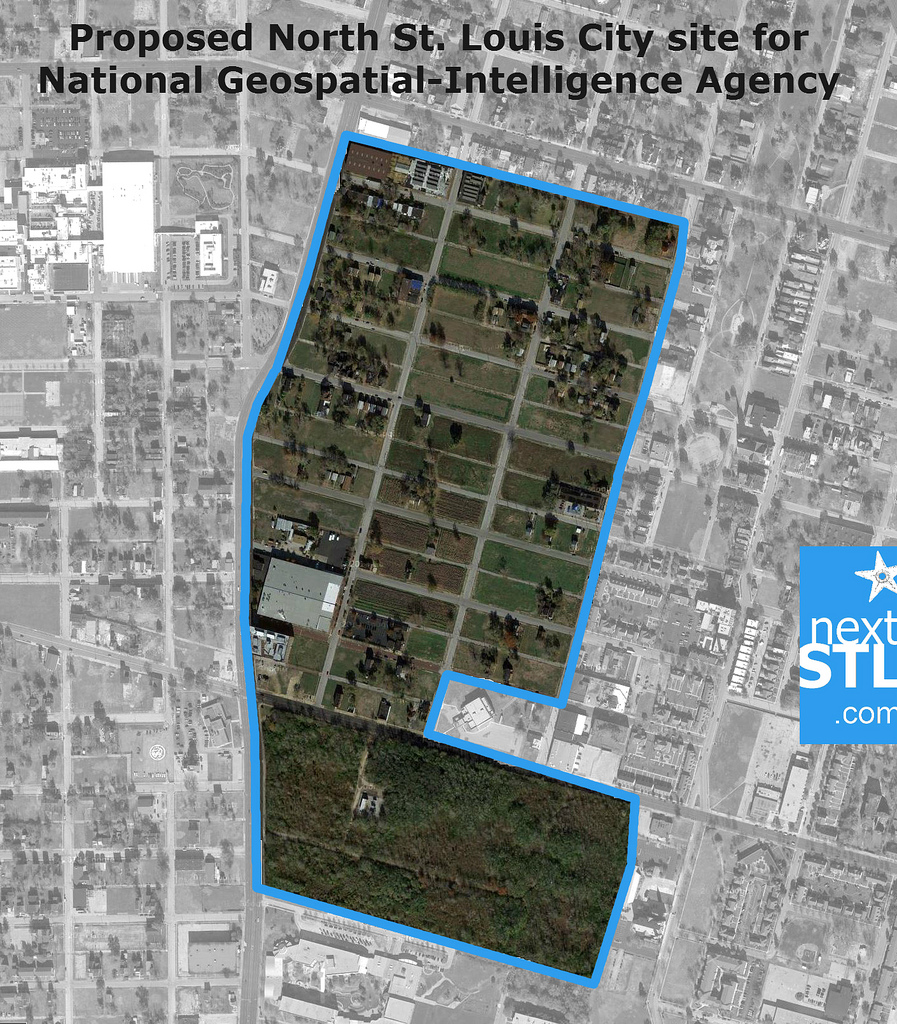 The additional land is north of the Pruitt-Igoe site and bordered by Jefferson, Parnell, the alley just south of St. Louis Avenue, and 22nd Street. Clearly the 122-acre site could easily accommodate the NGA and its requirements. For reference, the St. Louis University Frost Campus bounded by Vandeventer, Forest Park, Lindell and Compton is approximately the same size. It’s unclear if Cass Avenue adjacent to the Pruitt-Igoe site would remain open, but it is obvious that many city streets would be removed. The secure site would be ringed with a substantial security fence and 24-hour high level security.

In a city built prior to the arrival of the automobile, such a project would erase the past and present an entirely new development pattern, one nearly four times larger than Pruitt-Igoe itself, the failure of which has been often cited as being too monolithic. While covering perhaps the most vacant portion of NorthSide, images show a couple dozen homes, and several businesses currently occupy the site. Developer Paul Mckee (NorthSide) owns the majority of parcels needed for the project, but not all.

Returning to the P-D editorial, “The implosion of the Pruitt-Igoe experiment more than 40 years ago was due in part to a failure of local, state and federal officials to develop sound policy that worked together, in terms of community building and serving the poor. Today more than ever, the mostly poor, mostly African-American north side of St. Louis needs investment more than any other area of the St. Louis region. More than Fenton. More than Scott. More than the central corridor.”

Tough questions remain, and a discussion about not just Pruitt-Igoe and its many faceted economic and cultural legacies, but of larger city development, is just beginning. How hard should the city fight to keep the 3,000 NGA jobs within the city limits? At what cost? Will eminent domain be used? Is the proposed site plan an appropriate development for the city? How would the NGA project affect development across the remainder of the NorthSide project? 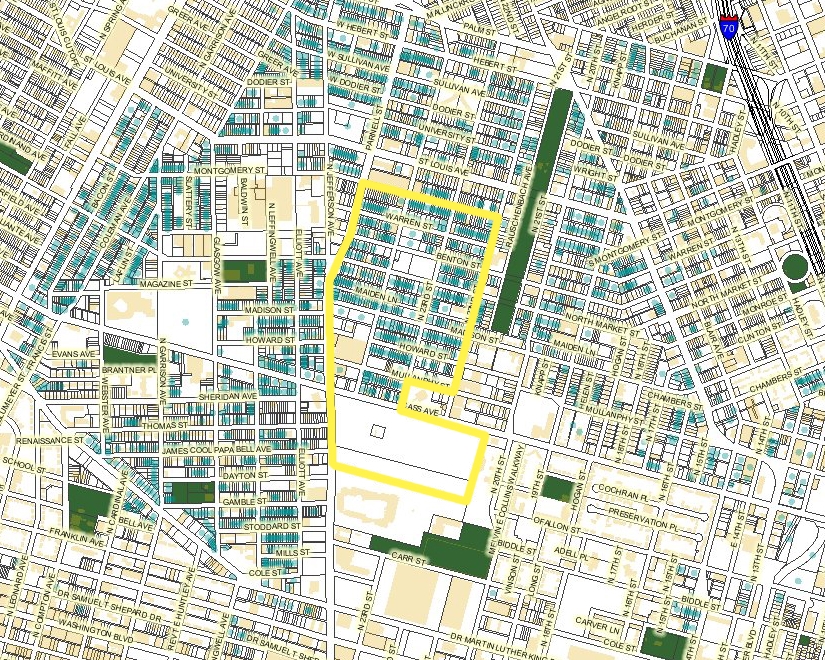 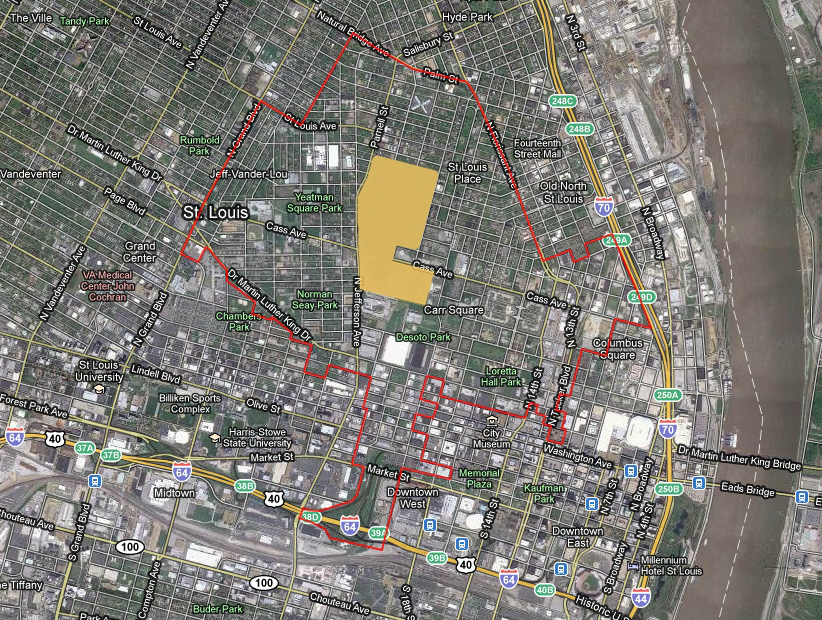 {the NGA site (in yellow) would occupy a large central portion of the 1,500-acre NorthSide Regeneration development area (in red)}

About the NGA: “NGA provides timely, relevant, and accurate geospatial intelligence in support of national security,” says the agency’s website. This is the group that tracked Osama bin Laden to a home in Pakistan. They do a thousand other things as well: track missile launches, ship movements, and much more. Currently housed in several buildings at the site of the Historic St. Louis arsenal, the agency is seeking space to build new, farther from the river and railroad tracks.