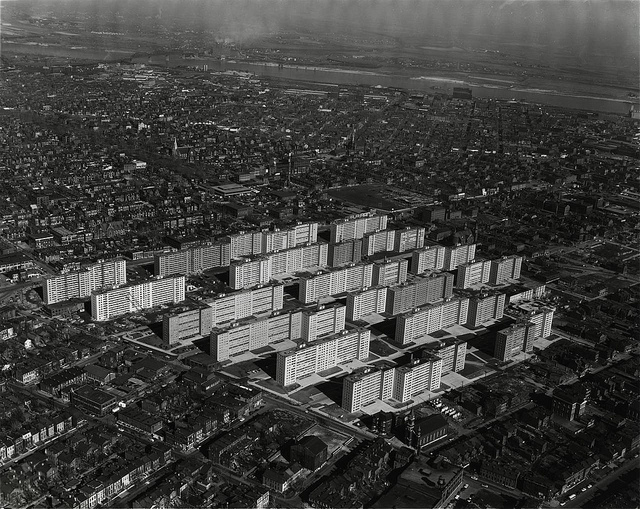 As the National Geospatial-Intelligence Agency begins its search for a new location for 3,000 jobs in the St. Louis area, nextSTL has learned that the City of St. Louis is pushing hard for a new facility to be built at the long vacant 34-acre Pruitt-Igoe site on the near north side.

Though not mentioned by name at the time, the recent city Board of Alderman marathon Ways & Means Committee alluded to the effort. According to nextSTL sources, the $25M sought by the Mayor’s office as part of that process was meant to complete neglected infrastructure such as sidewalks, streets, sewer, and electric work at and around the site in an attempt to keep the federal jobs in the city.

That allocation was the most contested issue at the recent committee meeting that stretched throughout an entire day. Depicted as a handout to McKee by some, others see the expenditure as a necessary investment in the Pruitt-Igoe site, and city even if the NGA passes on the site. The bill approved by committee reduced the amount for “Economic Development, Land Acquisition & Site Development” (the Pruitt-Igoe project) to $15M.

The federal government has reportedly shown an interest in the Pruitt-Igoe site, which has long been emblematic of failed federal housing policy. The vacant 34 acres would provide enough room to construct a secure facility for the organization that famously coordinated the search for Osama bin Laden and continues critical intelligence gathering work.

“The federal government created Pruitt Igoe,” Jeff Rainford, Mayor Francis Slay’s chief of staff, told the Post-Dispatch. “This would be an elegant way for them to solve it.” The Pruitt-Igoe site is the only option being considered that would keep the 3,000 jobs in the City of St. Louis.

Developer Paul McKee, who owns nearly 2,000 parcels of land in the city, holds an option on the Pruitt-Igoe site. The city recently extended the option another year at no cost. The original option was for $100,000 and two years, with a final purchase price of $2,000,000 if a buyer could be found. That deal was part of the city’s sale of 132 total acres, and approximately 1,000 parcels to McKee in early 2012. While not completely clear, it appears that the bond issue would help pay for purchasing the site from McKee.

Also being considered is Scott Air Force base in the metro east in Illinois, seemingly a natural fit for the agency. The NGA will reportedly choose between six potential sites: Fenton Chrysler plant, Weldon Spring at I-64, Mehlville Met Life, Northpark in north St. Louis County, Scott AFB, and Pruitt-Igoe. Not timetable has been given for a decision, but it is expected to take up to two years. The south riverfront facility is scheduled to close no earlier than 2019.

The NGA is currently located on the south riverfront in the city’s Kosciusko neighborhood. The site has been a federal government installation as the federal arsenal was located here (hence Arsenal Street) at the outbreak of the Civil War. Nathaniel Lyons is credited with preventing a Confederate militia supported by then Missouri Governor Claiborne Jackson from seizing the site. Adjacent Lyons Park was named in 1868, just seven years after his death, and is one of the oldest city parks.