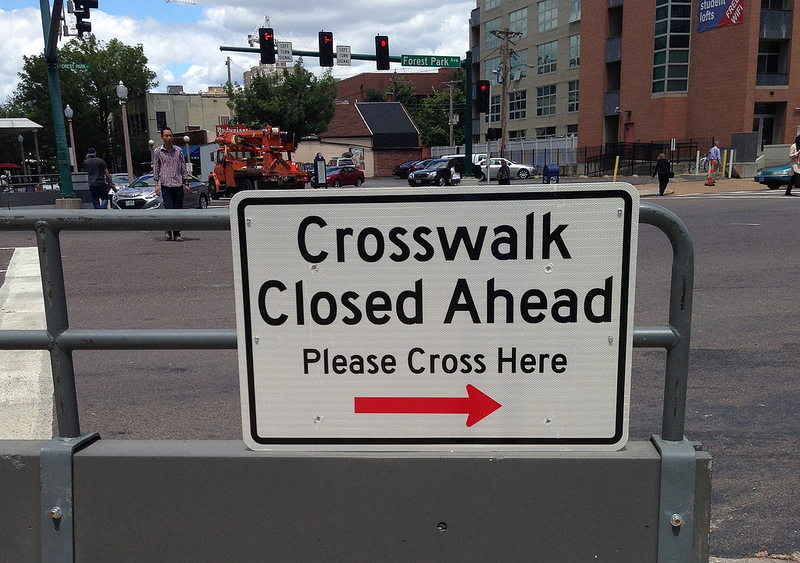 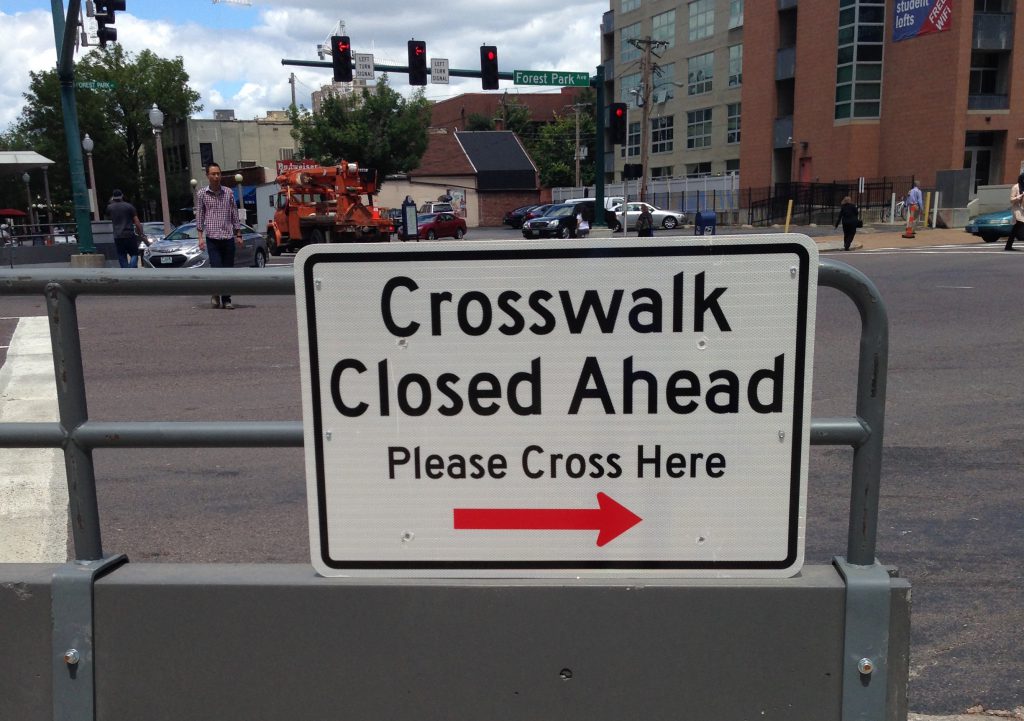 At what is likely one of the very busiest pedestrian crossings in the City of St. Louis, the city’s Streets Department at the request of BJC Healthcare recently removed a painted crosswalk and erected barricades to prevent people from crossing. Of course people still cross the street here, thought it’s more dangerous than ever.

The barricades often aren’t enough of a deterrent, and so a police officer is often stationed here to offer a brief and pointed admonishment – though this author has watched more than a few pedestrians cross under the watchful eye of an officer where the crosswalk no longer exists without a peep. Sure law enforcement sees this as a silly exercise.

We asked via Twitter if the crosswalk is being improved for pedestrians or removed. We asked a second time if the crosswalk was being removed, then asked again if either the Streets Department or BJC Healthcare could confirm. The Streets Department obfuscated in their reply: “BJC doing traffic changes in conjunction with new bldg, new crosswalk to be installed soon.” Turns out “soon” means different things to different people.

A further inquiry to June Fowler, BJC Healthcare VP-Corporate and Public Communications informed us that the crosswalk has been removed for at least two years “in conjunction with construction on the north end of the medical center campus”. This should not be an acceptable status for the intersection for the next two years. Institutions and cities can sometimes take the long view, while residents and users are forced to live in a city day-to-day. 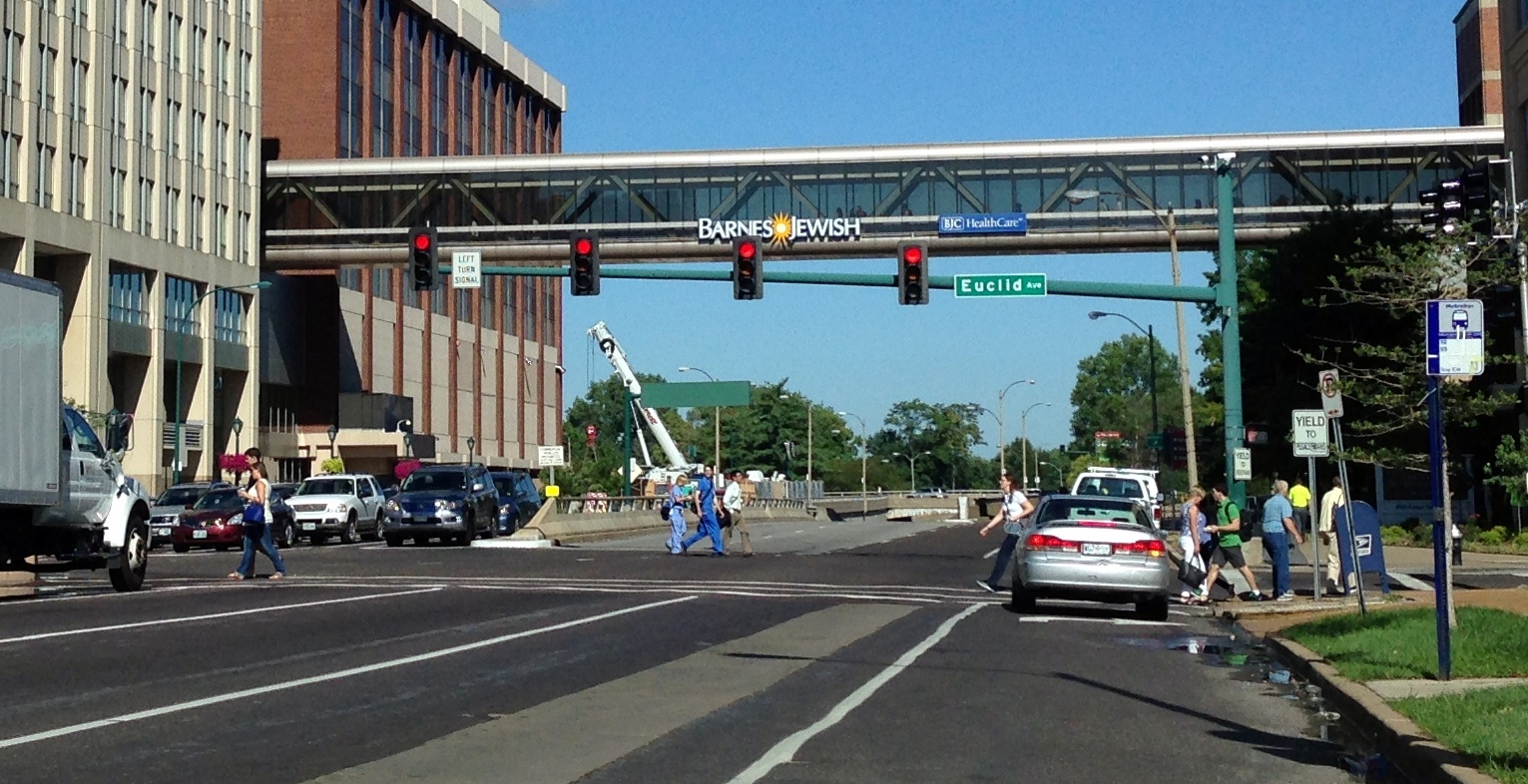 {regardless of barricades, pedestrians will continue to cross on the west side} 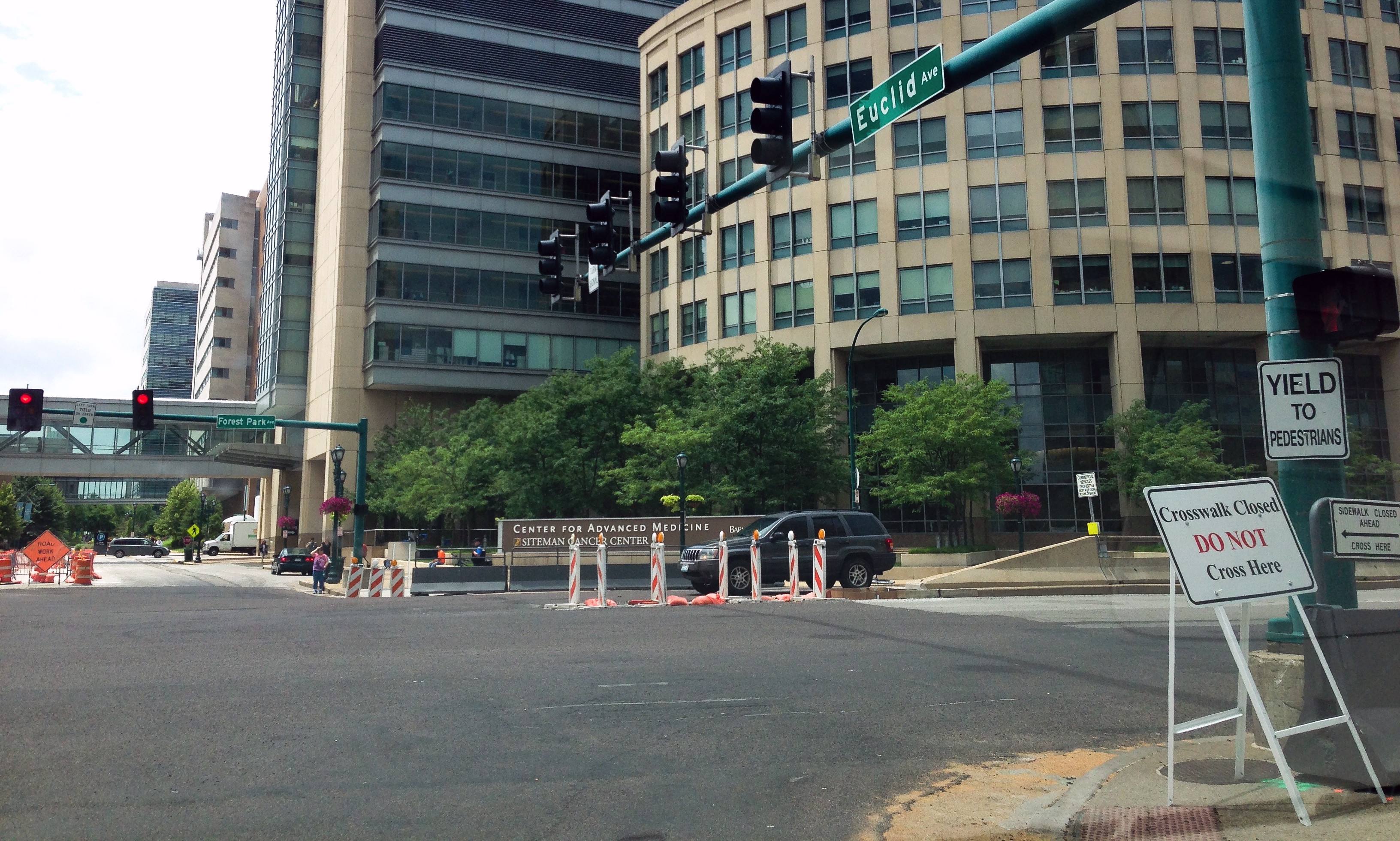 {conflicting signs, but a clear message – west side crosswalk being removed}

We’re petitioning for the crosswalk to be returned immediately, a pedestrian study to be conducted, and added pedestrian infrastructure to be added to this intersection. Input from those using the intersection should be considered and their voices included in future planning, as well as interim solutions. For some reason, “temporarily” inconveniencing pedestrians for two years while ensuring a clear path for cars appears to be the perfectly acceptable default.

Even before the change, the intersection did its best to repel pedestrians. Some refer to the harried crossing as the “Barnes Dance”, a reference to Barnes-Jewish Hospital. The pedestrian signal crossing Euclid is on a 2m45sec cycle. The Forest Park pedestrian signal is on a 3m cycle. This means that with the west side crossing removed, a person wishing to travel from the northwest to southwest corner will spend 8m30sec to cross. Eight minutes and thirty seconds to navigate a city street intersection at a busy pedestrian crossing. 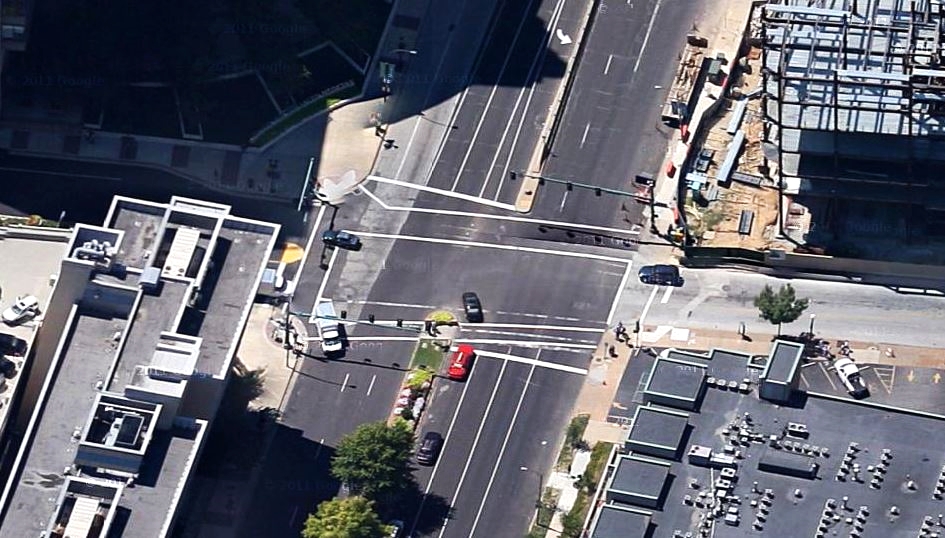 Forest Park Avenue carries nine traffic lanes on the east and west sides of the intersection. The problem here is in no way that cars lack space, or that pedestrians occlude traffic, but that clear, basic, functional infrastructure for anyone not in a car is ignored. “Improvements” like this demonstrate that neither the city, nor the entities at the medical campus really care about pedestrians and the urban environment.

If you don’t know the context, on the south side of the Forest Park Avenue at this intersection is the Washington University, BJC Healthcare medical campus, which also contains the St. Louis College of Pharmacy, the new Shriners Hospital, and much more. Approximately 15,000 people work on the campus. To the north along Euclid Avenue is the city’s most pedestrian oriented commercial corridor. This is where many of those employees and students eat, drink, and live.

Perhaps this shouldn’t be a shock. Relative to the number of pedestrians navigating the medical campus and surrounding neighborhoods, Washington University and BJC Healthcare continue to be surprisingly unfriendly to those not in a car. A couple years ago, a small pedestrian refuge was added to the east side of Euclid at Forest Park, giving pedestrians a place to hide if they get caught in the middle of the nine traffic lanes while crossing. The medical campus also spends millions to build elevated walkways so that their employees and visitors don’t have to be street level pedestrians.

Undoubtedly, it’s a significant challenge to move employees, visitors and patients around the campus – most of whom do arrive by car (and then become pedestrians). Comically narrow sidewalks, massive parking garages fronting city streets, investing in highway infrastructure before transit, and so on show the medical campus isn’t serious about plight of pedestrians.

The mistake continuing here and across the city and metro area is to build car infrastructure to serve peak traffic. The nine traffic lanes on Forest Park Avenue at Euclid are meant to accommodate the relatively high traffic of morning and evening commutes. This effort is detrimental to all other purposes city streets are meant to serve.

Want to create a place where people want to be, where restaurants and retail can thrive and a sustainable community take root? Add mid-block pedestrian crosswalks (as we want to see on Lindell Boulevard to the north) along the 1,000+ft Forest Park Avenue blocks, make the Forest Park/Euclid intersection a pedestrian scramble, build a protected bike lane on Forest Park Avenue, reduce the number of traffic lanes. And don’t worry, cars will continue to thrive in this environment. We know how to do these things, it’s a matter of priorities.

Changes like this happen quite frequently in St. Louis. A corporation or institution (or several residents) makes a request to close a street, put up a stop sign, remove a crosswalk, often “temporarily”, and voila, it’s done. These decisions deserve and require scrutiny. To that end, we have started a petition asking that BJC Healthcare and the City of St. Louis return the removed crosswalk, study options and invest in additional pedestrian amenities at this intersection. 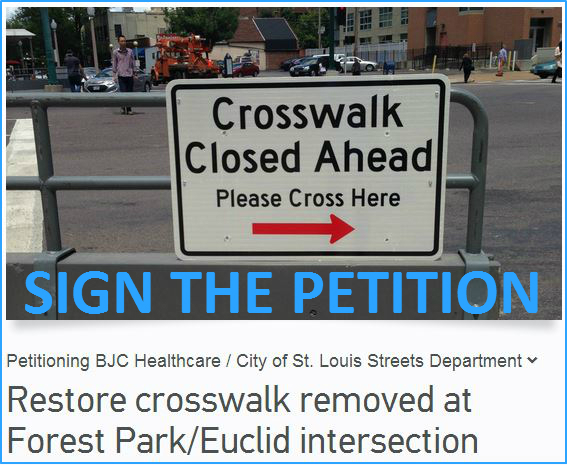