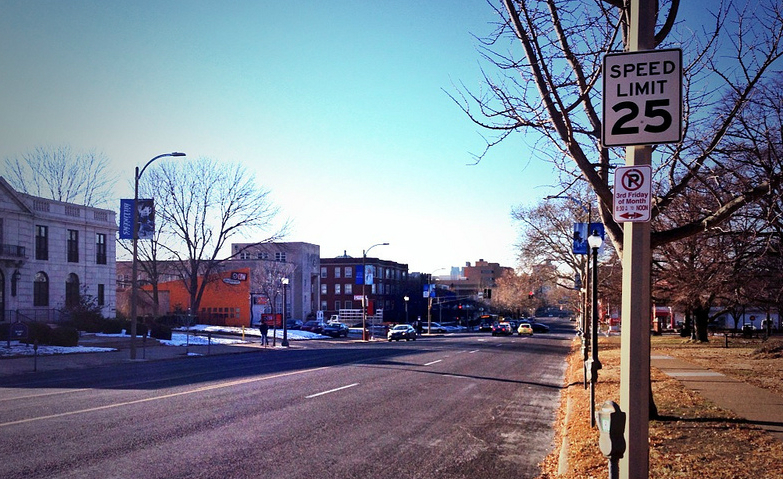 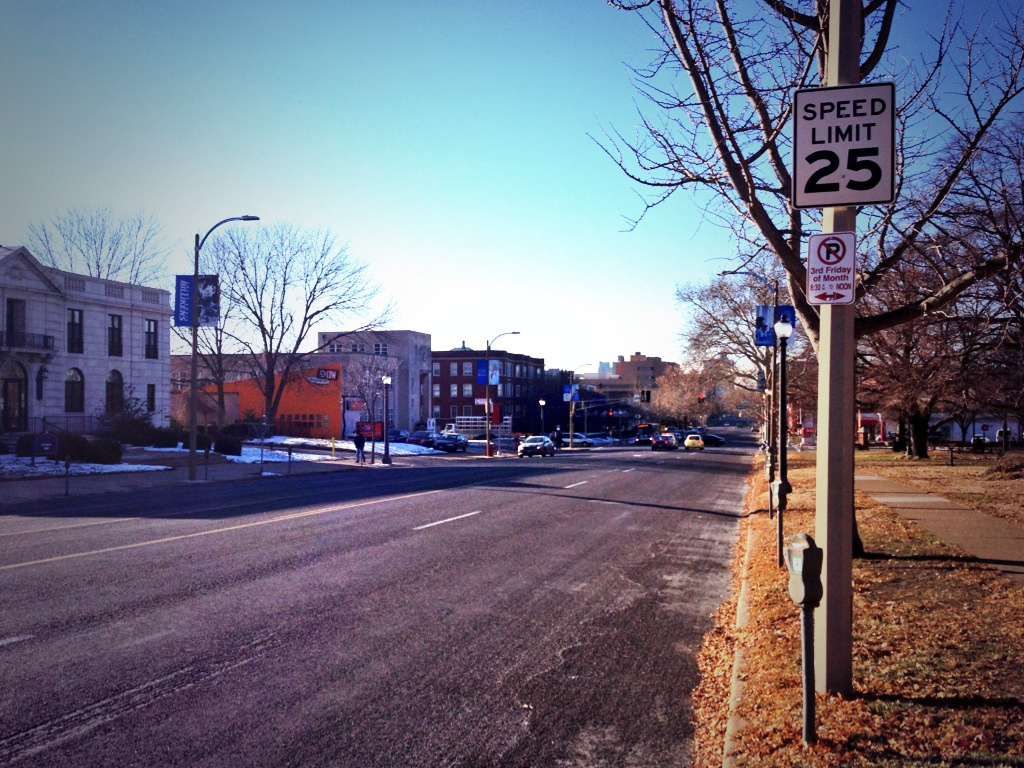 The Five on Your Side team at KSDK visited Carondelet Boulevard in South St. Louis City at the behest of a longtime resident who complained of fast traffic. She moved to her home in 1957 and has seen several “improvements” to her street. In 1957 there were approximately 800,000 residents in the city, roughly 150% more than today. How can traffic be worse? We have created dysfunctional infrastructure. The city has too often prioritized passing through the city rather than capturing value and serving residents.

Streets have been widened, in some places on-street parking has been eliminated. Streets have been closed, funneling traffic onto an ever decreasing number of “arterial streets”. This creates the illusion of increased overall traffic because it pushes more people into less space. When this happens, people complain and lanes are added and obstructions are removed.

What does that look like (image above Lindell east of Vandeventer)? Added center turn lanes – meant to keep more cars moving faster. “No left turn” signs insuring that at peak driving times, more cars are moving faster. Limited hours for on-street parking, longer green lights for through traffic, standard (very narrow) unprotected sidewalks next to six lanes of traffic… all of these “improvements” are the opposite for anyone not in a car. They are also bad for local businesses, and thus the local economy.

Our transportation planning in St. Louis is tragically limited to decreasing or eliminating traffic congestion. The premise of planning, and thus our hundreds of millions of dollars in spending is that “congestion relief” is the overriding goal of improved level-of-service, and “getting cars off the road” with transit.

We often misunderstand traffic congestion as an unmitigated drag on the economy. Departments of transportation tout studies showing how much time, gas, and money is wasted in traffic each year. The premise seeming to be that if we could just eliminate congestion that our economy would be humming along efficiently. What we must understand is that not all traffic is equal. As we’ve widened city streets into roads (and stroads) and closed residential streets throughout the city, we have left ourselves with city problems without a city economy. 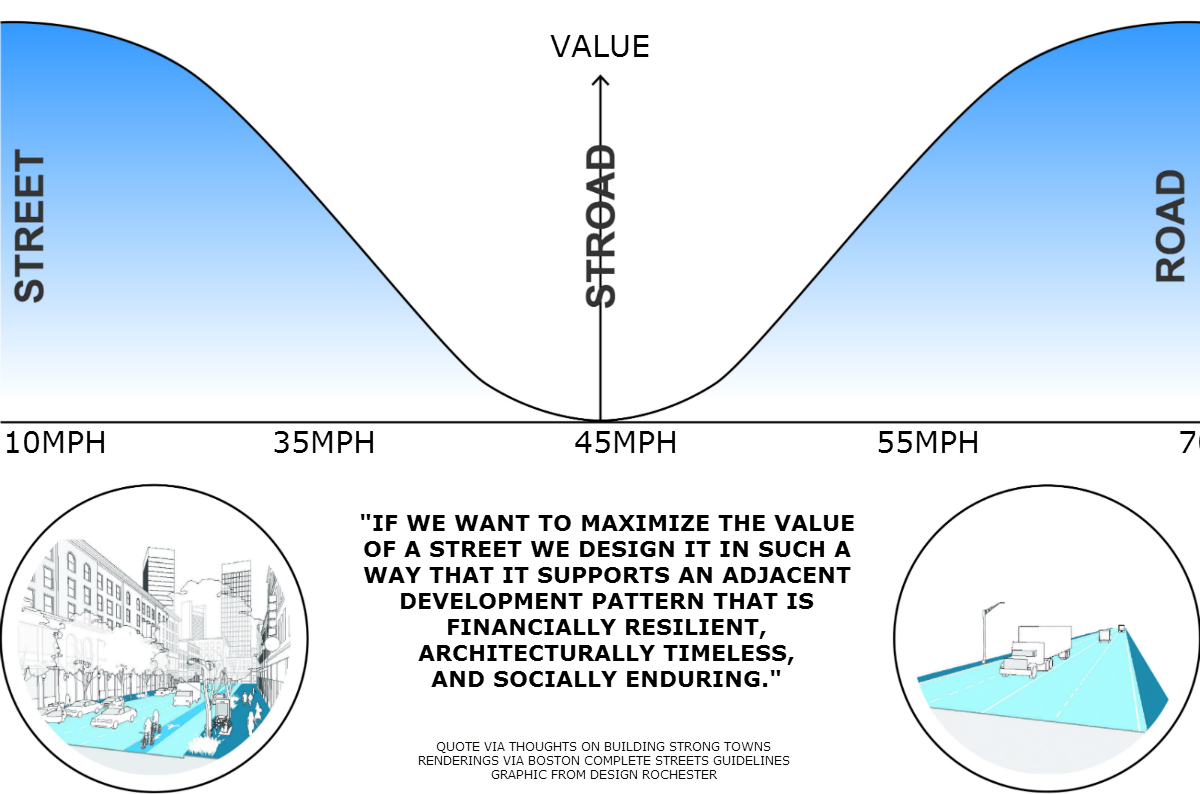 What does this mean? It means that our streets no longer function as they did and should. We innately understand this. We want people to travel more slowly along our city’s commercial corridors. On Lindell, the relatively narrow nine-foot traffic lanes, along with recently lowered speed limit, help, but we must do more than painting narrow lanes and lowering the number on a sign everyone ignores. The sign may read “SPEED LIMIT 25”, but the street tells drivers 35.

With parking lanes, the spaces rarely appear used for some reason, four lanes of traffic, and a center turn lane, Lindell Boulevard along Saint Louis University, Grand Center, and the Central West End, is a stroad – too wide for a street, too many lights for a road. It simply doesn’t function well. Lindell doesn’t serve pedestrians well (you know, everyone, even those who park and then walk), and doesn’t support dense economic use.

And this is to say nothing of basic pedestrian safety issues. As anyone who regularly travels along this stretch, one constant are pedestrians standing in the center turn lane, unsure of when and where to cross. It’s simply only a matter of time until a tragic accident here takes a line. Not only do pedestrians have to navigate seven lanes for cars, the blocks, which exceed 1,400 feet in length, offer zero mid-block crosswalks. The street tells pedestrians they’re not welcome, and drivers to not expect anything other than a clear road.

The urban blocks of Salt Lake City, UT are notoriously long. From a visit there, I can tell you that the restaurant just a couple blocks away is deceptive. It’s like a you’re a miniature pedestrian. Those blocks are 660 feet square, and have presented a challenge to developing a more urban environment there. The 1,400 feet here is astounding, and nearly four times the length of north-south blocks. Even the Kingshighway to Euclid block, which doesn’t feel overly long in its context is 900 feet.

More amazingly, it is 2,130 feet from Grand Avenue to the next signalized crosswalk at Compton to the east. From there, it’s 2,162 feet to the next crosswalk at Leffingwell. So who belongs here? People? Walkers? People on a stroll? Anything other than the most car-oriented businesses? And this a block from the burgeoning Locust Street corridor, some great bars and restaurants, and two well trafficked universities. It’s also where the historic Castle Ballroom appears to be coming down after failing to find a savior. It’s insanity.

So what to do? There are published guidelines on mid block crosswalks by the Federal Highway Administration, the DOTs of Virginia and Florida, hundreds of images and examples from around the country. We have the tools to do better. Salt Lake uses mid-block crosswalks, even adding flags in places. Cincinnati’s downtown has many mid-block crosswalks on it’s a ~460-foot grid. Lighted, signed, flagged mid-block crosswalks should be introduced on Lindell from Kingshighway to Grand, and further east on Olive. Medians, pedestrian refuges, and bulb-outs could also be explored.

The 25MPH signs are nice, and show we understand there’s a problem, but do nothing to help anyone not in a car navigate this part of the city. Lindell should stitch together the neighborhoods, arts and commercial districts, universities, and employment centers along its length, not serve as a barrier to avoid. The next time you’re sprinting across Lindell after exiting the Chase Theater (or the Moolah), standing in a turn lane nervously eyeing traffic, trying to catch a bus across from the grocery, or simply out for a walk and choose to avoid Lindell, take a moment and let those who can do something about it know it’s time for a change.

Tell them the Stroad sent you: