According to multiple sources with knowledge of the deal, Sweetie Pie’s, the soul-food restaurant made famous by the reality TV show Welcome to Sweetie Pies on the Oprah Winfrey Network, will soon have another big name on board. The three-location restaurant is close to finalizing a deal with Matthew Knowles, father of international recording superstar and actress Beyoncé.

Knowles, based in Houston, has recently been spotted around St. Louis at several eateries. The deal is expected to close in early April. His Music World Entertainment, Inc. has sold more than 300 million records. Additionally, Knowles Music World Properties has real estate holdings across the country.

Sweetie Pie’s was founded by Robbie Montgomery and her son Tim Norman in 1996 in the north St. Louis suburban community of Dellwood. A second location in The Grove neighborhood of central St. Louis City opened in 2006.  Both were immediately popular. With this success and hundreds of thousands in state Brownfield Redevelopment Incentives, Montgomery was able to fulfill her lifelong dream of opening a restaurant, banquet hall, cooking school and performing arts space in a single location. In 2012 she opened Sweetie Pie’s $4 million The Upper Crust location on Delmar in the city’s Grand Center arts and entertainment district.

The extent of the plans Knowles may have for the popular eatery that regularly sees lines out the door and around the block, is unclear, but the possibilities are extensive. Montgomery has been quoted as saying, “I think closing West Florissant (Dellwood) and Mangrove (in The Grove) would be a great business decision,” Neither location is lucrative enough according to Montgomery. She has also expressed an interest in putting her full effort into the Grand Center location. In the past, rumors of a location closure have gained a lot of attention, but were temporary and apparently the result of poor communication by the restaurant.

Knowles has the capital and connections to take the Sweetie Pies name national if he so chooses. It’s expected that Montgomery and Norman will continue to be involved in the operation of at least the Grand Center location. A thread running through the TV show, set to begin its fourth season on March 15, is the stress created by the family running three locations. Clearly, any further expansion would require external resources. Tellingly, the first three episodes of the season are titled “Houston’s Calling”, “Shifting Priorities”, and “Negotiating a Dream”. The synopses mention a new restaurant location in Houston, the first outside St. Louis.

Locally, Sweetie Pies Upper Crust was also notable for its location. The massive makeover of an unremarkable building on the edge of Grand Center was news in itself, but all the more so because it happened in the shadow of the John Cochran Veteran’s Administration Hospital. Significant demolition made way for the hospital, and since the 1940s its desire to expand has been well documented. According to the Post-Dispatch, $44M was appropriated by Congress in 2009 as seed money for a 262K ft hospital expansion. Fox2 reported in 2012 that Sweetie Pies might be forced out by the VA expansion. 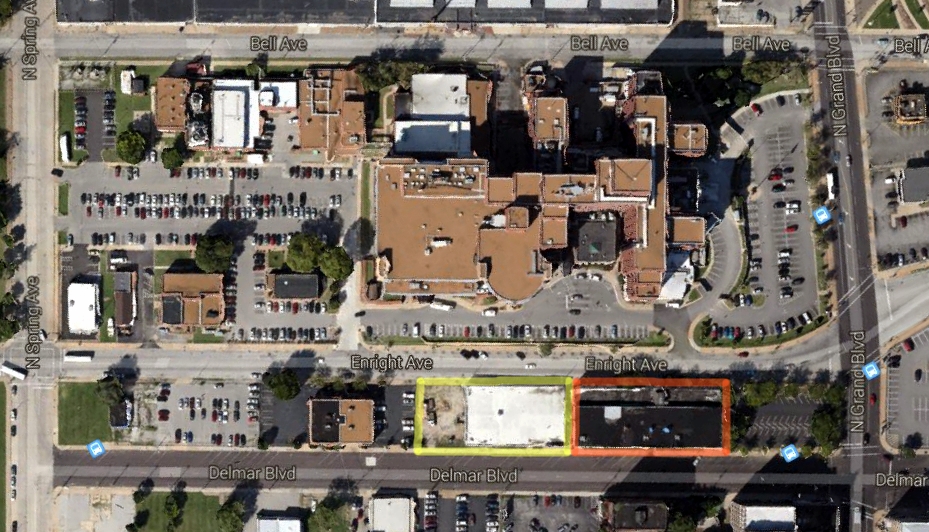 {Sweetie Pies Upper Crust in yellow, The Palladium/Club Plantation in orange, VA above}

In 2010 Missouri Governor Jay Nixon happily announced $424, 227 in Brownfield Redevelopment Incentives for the Sweetie Pies Upper Crust location in Grand Center. The announcement was made at the restaurant’s location in The Grove. The Governor was quoted at the time as saying, “Economic incentives like the Brownfield program are essential to spurring growth and allowing Sweetie Pie’s and other businesses to hire hard-working Missourians. These resources will turn an abandoned building into a new restaurant for a unique St. Louis business which has developed a large, loyal and diverse customer base, while creating jobs and boosting our economy.” 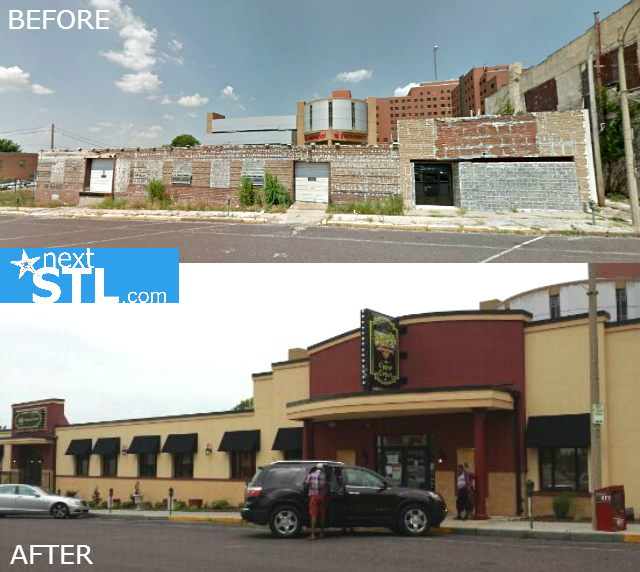 Additionally, adjacent to Sweetie Pies sits the Palladium Building, once home to the Club Plantation. The musical history of the building is remarkable. It has sat vacant for some time and has been excluded from the extensive master planning effort underway in the district. The opening and instant popularity of Sweetie Pies made a VA takeover seem less likely. The city and VA watched as Montgomery’s dream came to fruition.

Yet Montgomery doesn’t appear stuck on the location, once telling the St. Louis American, “I’m prepared to be a good citizen and make room for the Veterans Hospital – if that happens. If they prepare for me to go someplace else I’ll move on. I listen to God, so wherever he leads me I will follow.” A recent St. Louis Public Radio commentary by musician Pokey Lafarge (recently performing on the Late Show with David Letterman) has raised the profile of the preservation effort. It’s expected that the VA will finalize expansion plans in the near future.

Montgomery grew up in the former Pruitt-Igoe housing project. She first became widely noticed as a member of the Ike and Tina Turner Revue backing group, the Ikettes, during the 1960s. Before retiring from singing in 1980 following a collapsed lung, she also worked with Dr. John, Stevie Wonder, Marvin Gaye, Pink Floyd, Van Morrison, and The Rolling Stones among many others. The reality television series is produced for the Oprah Winfrey Network by local firm Coolfire Studios. An attempt to reach Montgomery for this story was unsuccessful.

Geoff often scoops the mainstream media regarding major development projects across the St. Louis region. He's written for nextSTL.com since 2012. Alex is the owner and editor of nextSTL.com. He can be found on Twitter @alexihnen and reached at [email protected]

View all post by Geoff Whittington and Alex Ihnen