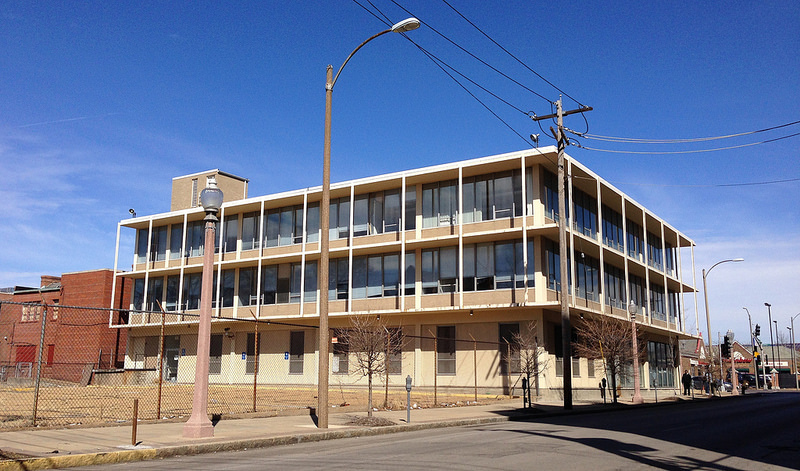 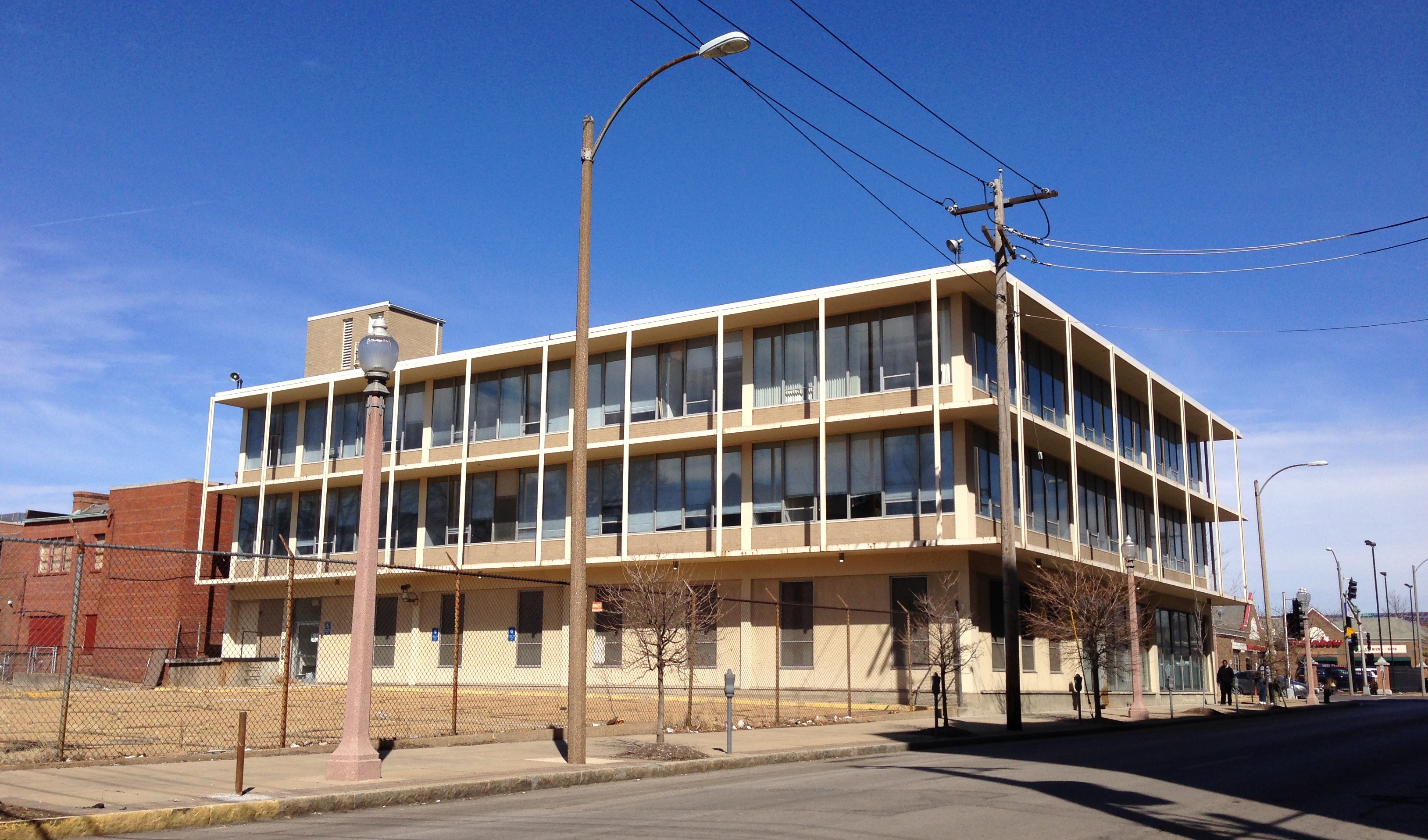 The Remington Rand Building, most recently home to the St. Louis Housing Authority Headquarters located at 4100 Lindell in the Central West End may soon be redeveloped into 16 apartments with a bank occupying the first floor. The Lawrence Group will present its $5.35 million rehab proposal to the Central West End Development Committee meeting on Tuesday, March 11

The proposal calls for the rehab of the Mid-Century Modern 25,500sf building into eight market-rate apartments on each the second and third floors. Apartments would carry the Mid-Century Modern aesthetic to the interior design. Eagle Bank as the primary tenant on the ground floor, will occupy 4,000sf, of the 6,700sf floor plate. 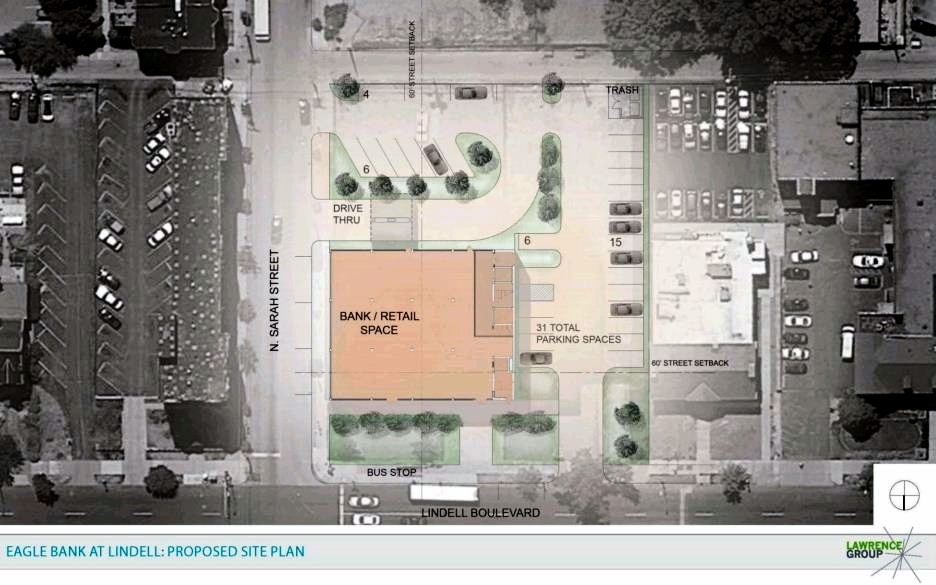 The rehab proposal also calls for the demolition of the adjacent 4108 Lindell building to the west for a surface parking lot. The existing parking lot located south of 4100 Lindell that formerly served the Housing Authority would be partially converted into a drive-through for the bank. There would be 31 parking spaces for the site in all.

If approved, construction would start in July 2014 and would finish in Spring of 2015. The developer is requesting a 10-year tax abatement. According the agenda notes, Park Central supports the request with the conditions that 4108 Lindell be rehabbed or replaced with another building, and that all curb cuts are removed from Lindell and placed on Sarah Street and the alley behind Lindell. 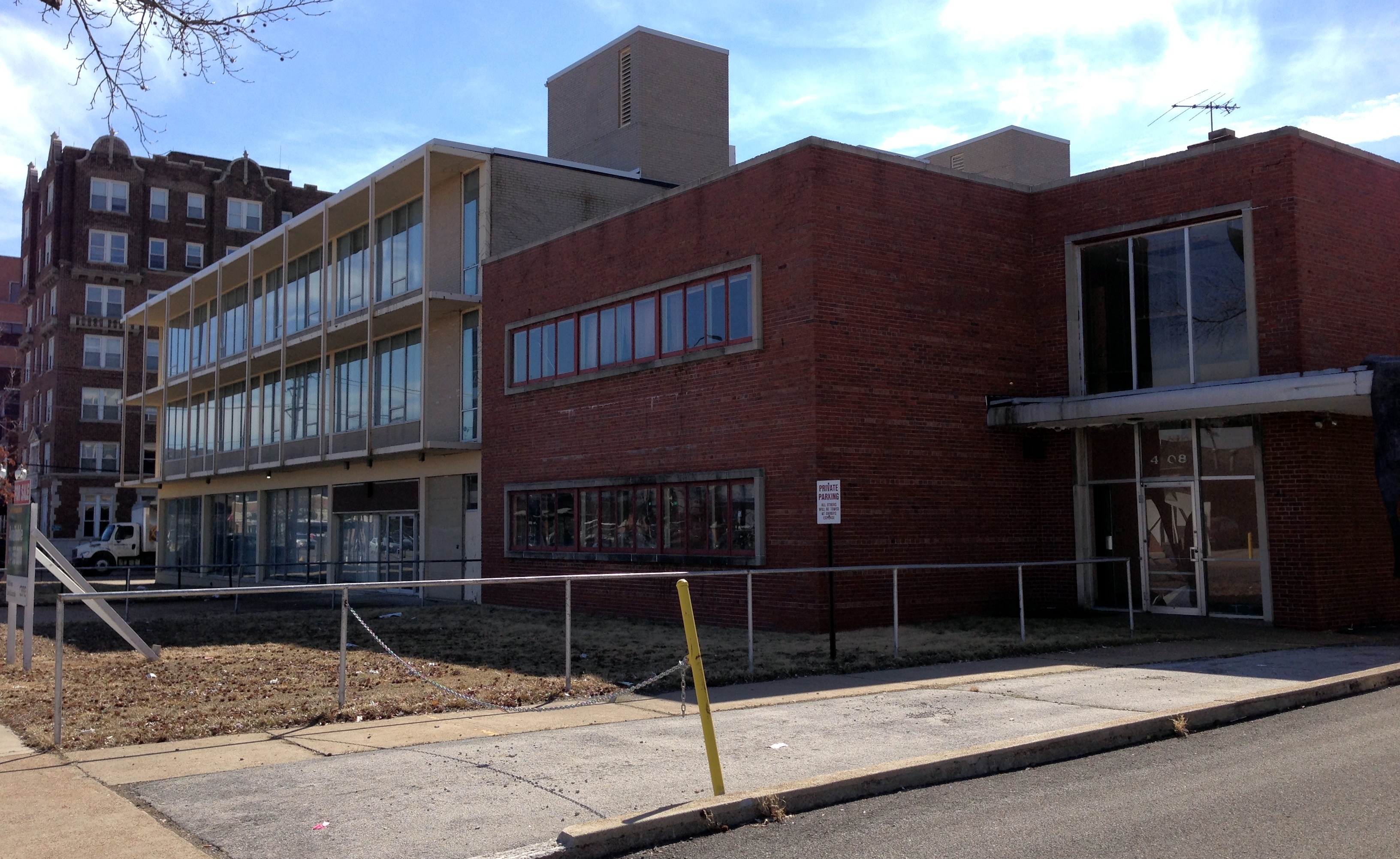 The building has been the target of controversial development plans before. The St. Louis Housing Authority vacated the building in 2009, moving into a new building housing a PNC Bank branch and Chronicle Coffee near Grand Center and the mixed income Renaissance Place at Grand housing development.

The building has been seen as a challenge to redevelop, with the most serious plan previously presented being for the building’s demolition and replacement with a CVS pharmacy. That plan’s rejection was attributed to “recently arrived neighbors passionate about urban design.” Since that proposal died in 2009, the building has remained vacant. CVS eventually built a new story a couple blocks east. There, a battle to save the elliptical AAA building successfully pushed CVS to alter its design plan.

The proposal by the Lawrence Group goes before the Park Central Development Corporation’s Development Committee tomorrow. The form based code overlay recently implemented for this part of the Central West End should preclude demolition for a surface parking lot facing Lindell, no matter what landscaping or urban camouflage is employed. However, it’s still unclear if the code meant to encourage density and retail corridors has teeth. A recent proposal called the West Pine Lofts, just a block south on Sarah, is being allowed to forgo code required street level retail.

The case will likely be made by the developer that one building must be sacrificed to save the other. Located a short distance from Saint Louis University, the Cortex innovation district, Washington University Medical School and the many institutions of the medical campus, as well as being along the proposed Lindell Streetcar line, the project could be ideal for car-optional residents. Marketing it as such would be a big step forward for St. Louis, and likely prevent the demolition of another building along Lindell. 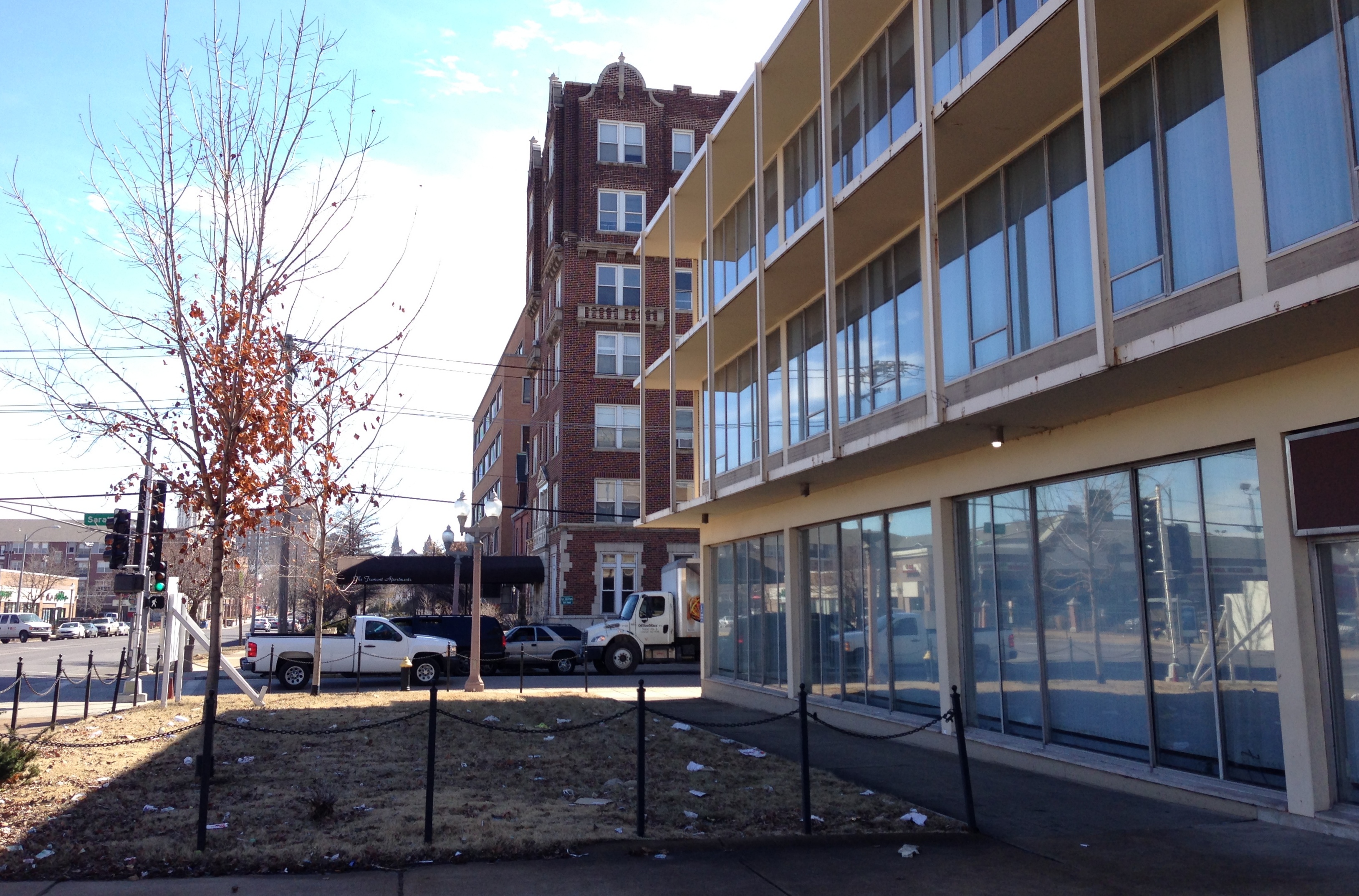 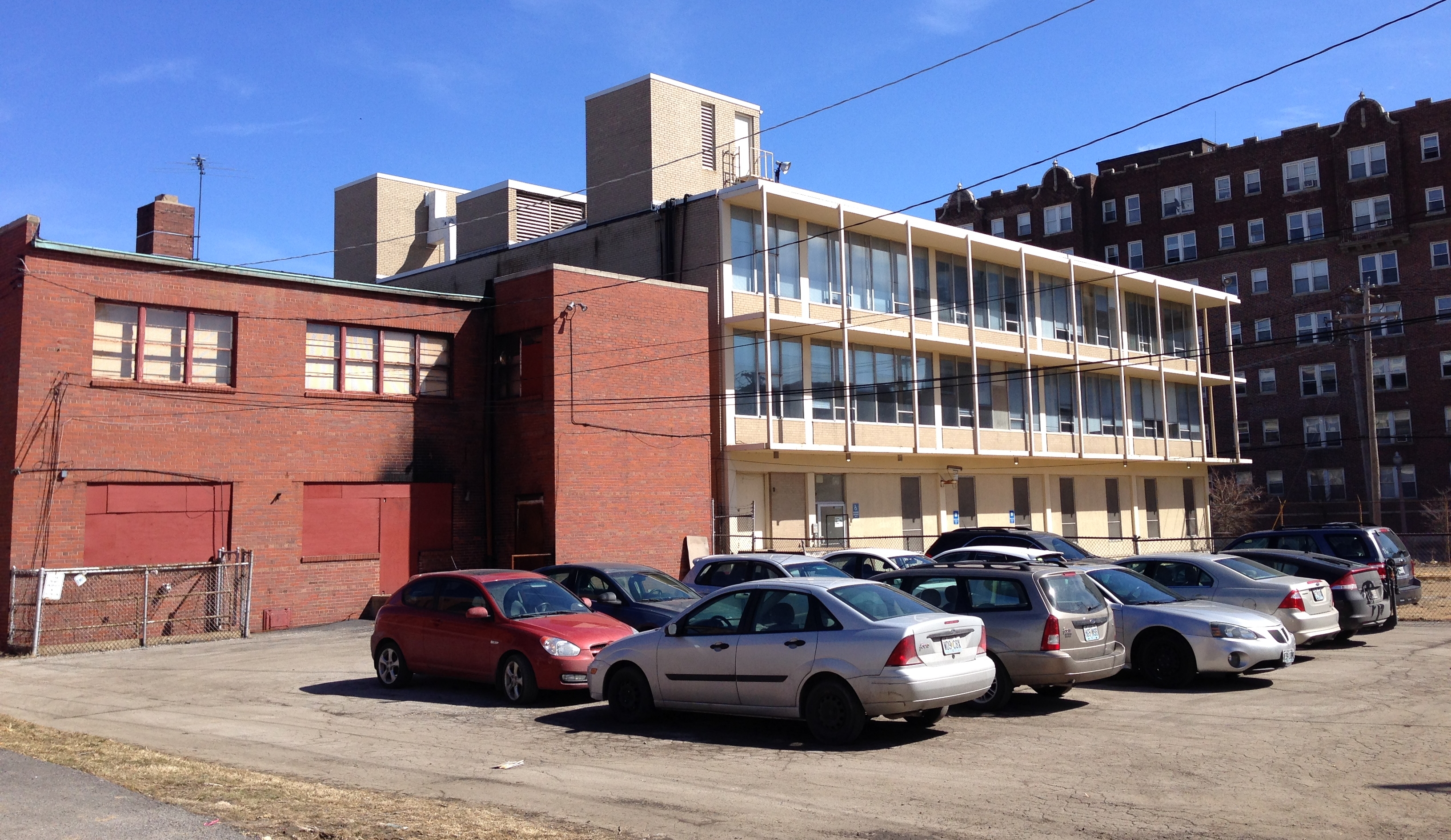 At its meeting last night, the Park Central Development Corporation’s Central West End-Midtown Development Committee endorsed the Lawrence Group plan outlined above. The endorsement clears the way for the demolition of 4108 Lindell, contravening the neighborhood’s form based code. That code is meant to increase density, especially along major corridors, and prohibits surface parking on Lindell. 4108 Lindell would be replaced by 11 parking spaces. The Development Committee also endorsed three years of 100% tax abatement and 2 additional years of 50% tax abatement for 4100 Lindell.