In part one of this three-part series we looked at the state’s infrastructure and decided to build a high speed rail line between Kansas City and St. Louis. Let’s continue.

Now that we have funded the track, let’s talk about operating the trains: Could a high speed train be operated and maintained profitably? There are two possibilities: Amtrak could buy and operate HSR trains, or the State of Missouri could issue an RFP for a private company to operate the trains on their track. This model is already being used in Europe and Asia. Private operators pay a user fee to operate their trains on government-built tracks.

But for now, let’s put Amtrak in charge and do a little math.

The state of Missouri would grant Amtrak the usage of their high speed track at the cost of maintenance; initially $100,000 per mile per year, which would add up to a $25 million annual user fee for the entire track.

[This is half the European average of ~$200,000 per mile per year, but the tracks there are being much more heavily used with up to 15 trains an hour.]

Missouri has now secured the upkeep of the track for the duration of the contract – say, 30 years – at no cost to the tax payer. [Compare this to a highway.] 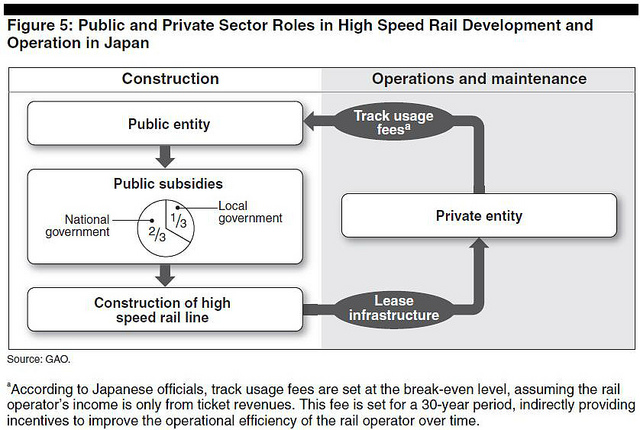 In the northeast corridor, Amtrak has a ridership of 11.5 million per year in a catchment area of 44 million. 1 out of 4 takes the train once a year. By using the same ratio for our KC-STL line – with its catchment area of 5 million – we project 1.25 million yearly or 3,400 daily passengers; enough to warrant 12 one-way or 6 roundtrips. Such a schedule could be operated by two (400-seat) train sets, each making 3 round-trips.

What this means is that based on the projected initial ridership the trains could be operated at the break-even point with ticket prices at a level comparable to that in Europe. Once ridership exceeds the initial projections, operating the line would become profitable.

The next question we’ll have to answer is: Can HSR compete with airplanes and cars?

We’ve already established that highways don’t pay for themselves. Now let’s take a look at commercial aviation. The Airport and Airway Trust Fund supporting the nation’s aviation system currently receives about 35% of its funding from the U.S. Treasury. [It also faces a yearly shortfall of about $16 billion for the foreseeable future.]

Despite the airline system being hugely subsidized, you’ve probably heard this perennial joke: “You want to become a millionaire? Start an airline as a billionaire.” Airlines don’t make money. They make money when times are good; they lose money when times are bad. Every major U.S. airline (except Southwest) has filed for bankruptcy over the last decade; some more than once, and many have not survived.

Going back to Missouri, let’s compare the time and cost of making the trip from downtown St. Louis to downtown Kansas City by different modes of transportation:

Airplane:15-minute drive to the airport; at airport one hour before flight; one hour flight, gate-to-gate; 45 minutes from gate to downtown by taxi. Ticket prices are based on the cheapest non-stop air fare and walk-up fares found on Southwest.com. [We did not consider a ~$50 one-way taxi fare from airport to downtown.]

Car:Trip from home to downtown at maximum highway speed. Cost based on IRS standard of $0.50 per mile, including gas and wear.

HSR train:A 15-minute drive/walk to the train station; at station 15 minutes before departure. Ticket prices are based on operational cost per passenger mile.

The conclusion has to be that an HSR train between Kansas City and St. Louis would be competitive. It would be the fastest- and by far the most economical option.

Based on the initial projected ridership it would also remove some 1,400 cars per day from I-70; the bulk of that number during rush hours. 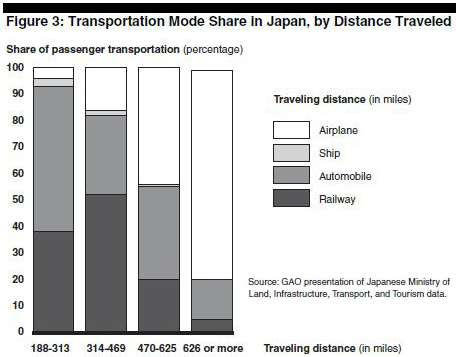 The 248-mile distance between Kansas City and St. Louis happens to be in the sweet spot for high speed rail. This is the range wherein fast trains beat out both airplanes and cars.

In part three we will attempt to answer what the economic, environmental, and safety advantages would be, and how many jobs would be created by HSR in Missouri.