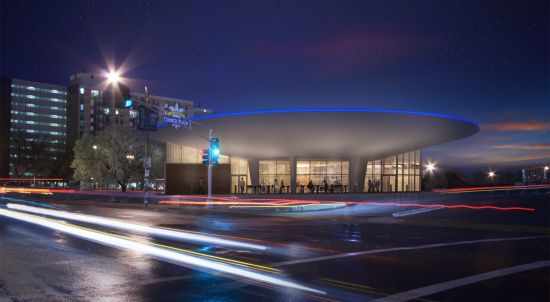 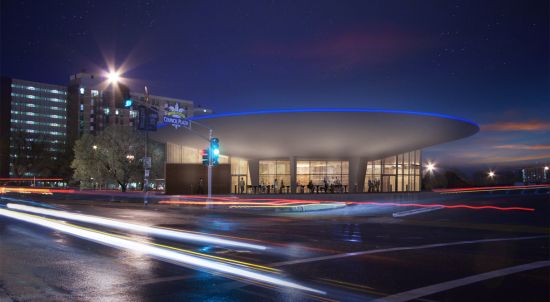 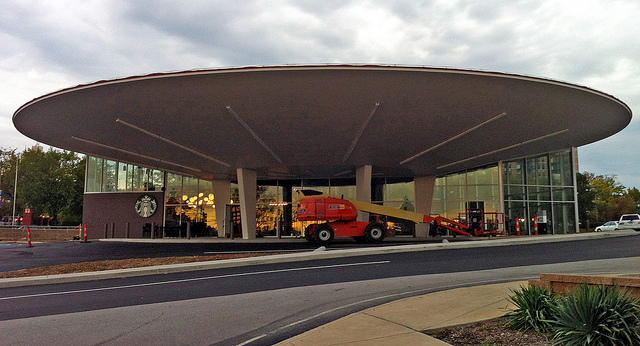 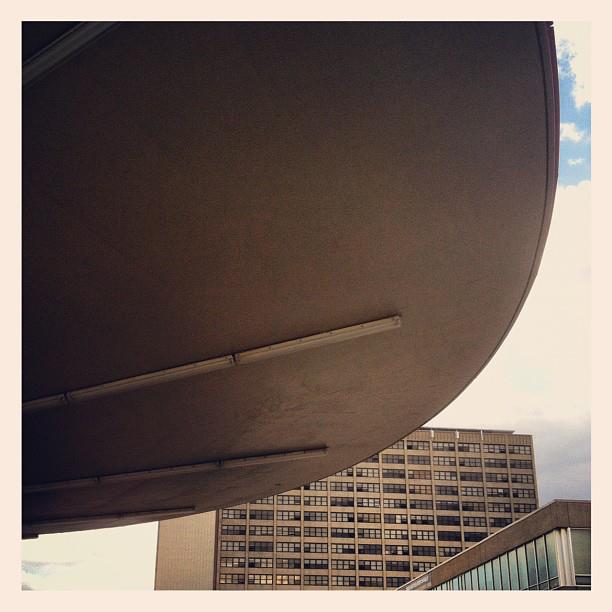 It’s been a while since the Phillips 66/Del Taco saucer at Grand and Forest Park Avenue has been in the news. Rumors have heated up recently about two future tenants set to occupy to landmark building once threatened with demolition. Owner Rick Yackey argued last June at a Board of Aldermen hearing that while the Council Towers complex was historic and justified in its listing on the National Register of Historic Places, the former gas station, turn burrito stand, was only listed by geographical happenstance. Yackey, and 19th Ward Alderwoman Marlene Davis, argued that the building was a blight on the area, a magnet for crime, and that demolition and a new building should be an option for the developer. Having space for multiple tenants was stated as a necessity to maximize profit.

A grassroots effort to opposed the demolition drew widespread attention and very quickly became the highest profile effort to save a mid-century modern building in St. Louis. That effort was successful, City of St. Louis mayor Francis Slay weighed in and the potential demolition was delayed long enough to locate new viable tenants. The building is planned to be expanded to the east, retaining its iconic form, but allowing room for two commercial tenants. With St. Louis University surrounding the location and high traffic counts on adjacent streets, there is no doubt that both Starbucks and Chipotle will be successful and the iconic saucer gets a new life. No new renderings have been made available at this time.

The saucer was the subject of a What Should Be post, envisioning a new life for the building as a transit hub and civic living room. The local pizza juggernaut Pi suggested a new “Pi Burger” concept for the space as well as a reconstructed at-grade Grand/FP Avenue intersection. The combined creative outflow clearly had an effect. In addition to the ultimately successful effort to reuse the building, the City of St. Louis is exploring an reconstructed at-grade intersection to better tie the site to the city and SLU campus.

Update from St. Louis Post-Dispatch 4/13: The developers will preserve the round concrete roof and erect a mostly glass addition on the east side of the building to house Chipotle. Starbucks will use much of the original building, which will get new glass walls to reproduce the structure’s original see-through appearance. The businesses will seat about 100 people combined, plus 50 more on a patio beneath the saucer’s broad overhang. Starbucks will have a drive-thru window.

Yackey said the $2.5 million development will produce a 4,400-square-foot building half the size of the commercial structure he had initially proposed for the site. State historic preservation tax credits will help fund the saucer project but the trick was finding suitable tenants, he said. 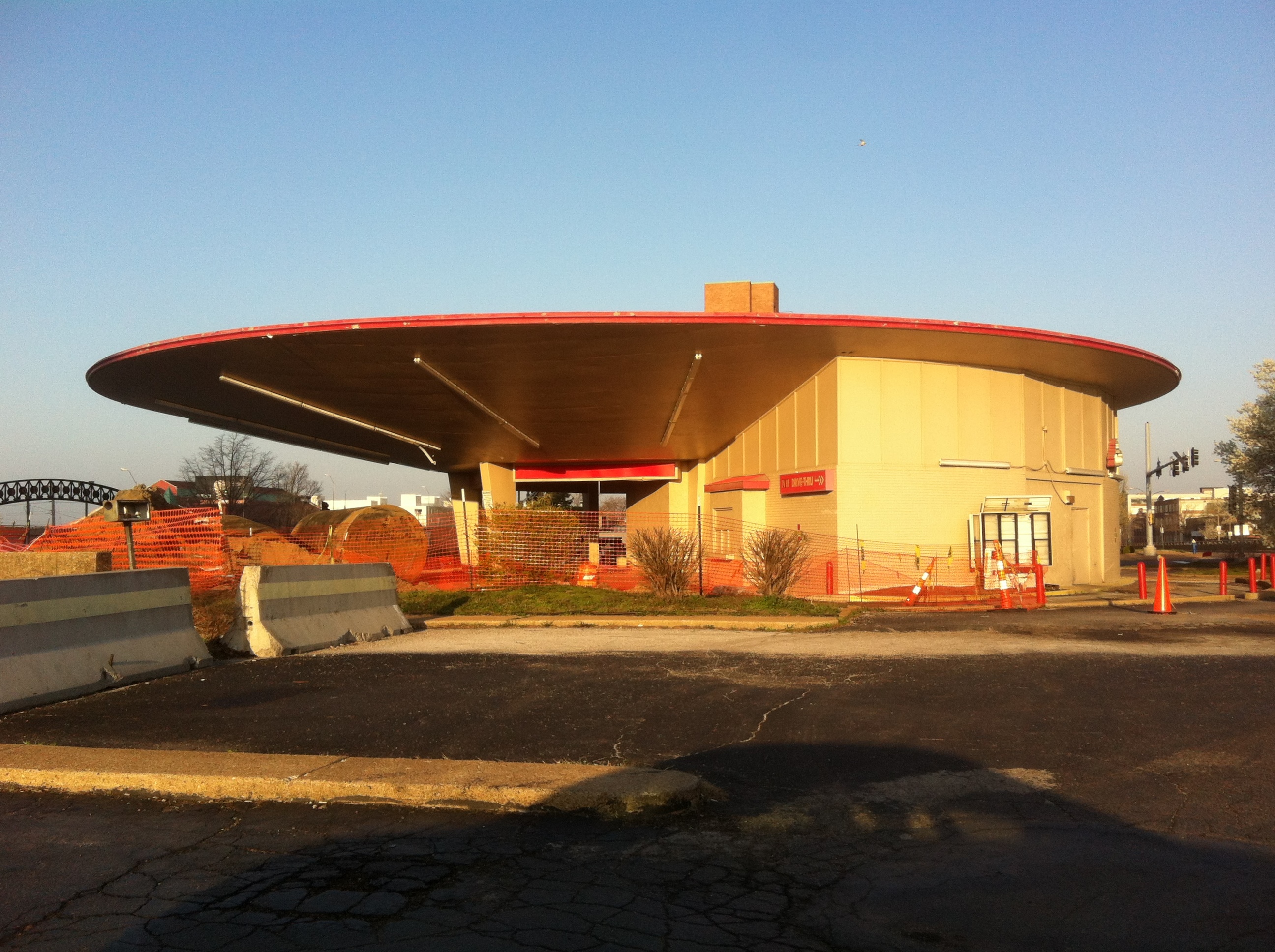 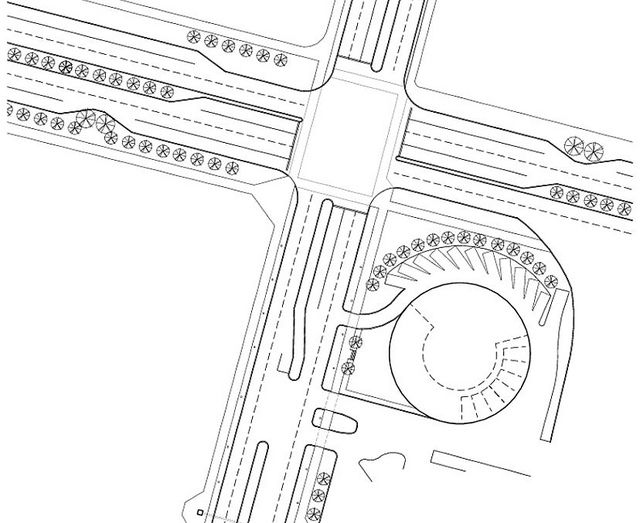 Del Taco saucer is a time machine for me – Bill McClellan, Post-Dispatch
While Alderman Phyllis Young droned on about a grocery store, I spoke with Alex Ihnen. He is one of the leaders in the effort to save the flying saucer-shaped Del Taco building. He is the co-owner and editor of nextstl.com.

Perhaps you are wondering what nextstl.com is. I don’t know. Ihnen’s business card says: “Be informed. Be engaged. Be part of what’s next.”

Be part of what’s next? It is hard enough for me to stay in the present. I keep slipping into the past.

The Del Taco Kerfuffle – Urban Hoedown
As I said on Twitter yesterday, doing development ward by ward is like doing non-smoking in a restaurant table by table. Because each individual unit is connected in a million different ways, and the geographic differences are pretty much arbitrary, it just doesn’t make sense (unless you’re the King of that particular kingdom) to do anything that way. Ward competing against ward, no overall governing policy or vision or goals…hm, sounds like a miniature of what’s going on in St. Louis County between all those municipalities!

As NextSTL pointed out, the real issue seemed to be the disconnect between the elected officials and their constituents – they didn’t get what the issue was. And you have to love the condescension implied when an elected official assures the other elected officials that the people would support the bill if they just understood it.

Aldermen slow down Del Taco demolition – St. Louis Post-Dispatch
But preservationists now say that they don’t believe the verbal commitments of Yackey and Davis. And the very intervention by city leaders, they said, highlights concerns that the city lacks a watertight process to guarantee historic buildings get thorough reviews before demolition.

“Frankly, there’s very little trust in the process,” said Alex Ihnen, co-owner and editor of nextSTL.com, the urbanist blog and message board. “Those of us who don’t like the process aren’t going to take them at their word, and are just going to go with what’s in the bill.”

Aldermen advance blighting, and tax abatement, of Del Taco – St. Louis Beacon
“The (historic) district would not have been listed without this (Del Taco) building,” said Lindsey Derrington, a specialist in historic preservation. Derrington. Derrington, as well as a few aldermen and many audience members, encouraged the board to remove any phrasing with the word “demolition” from the bill.

“If we were to demolish every building that at one time had a bad tenant, at this point in 2011, we would have zero buildings left,” he said, to applause from the audience. Ogilvie later said to his fellow board members to “face the facts” they what they were approving was sending the building down the road to demolition.