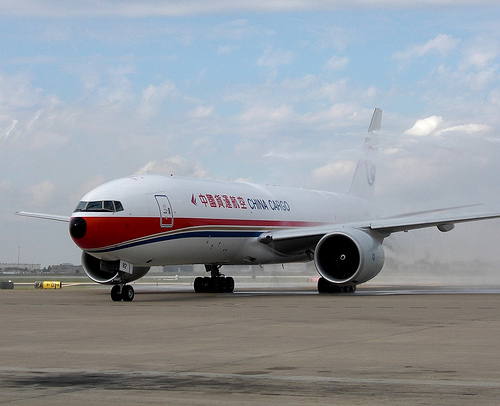 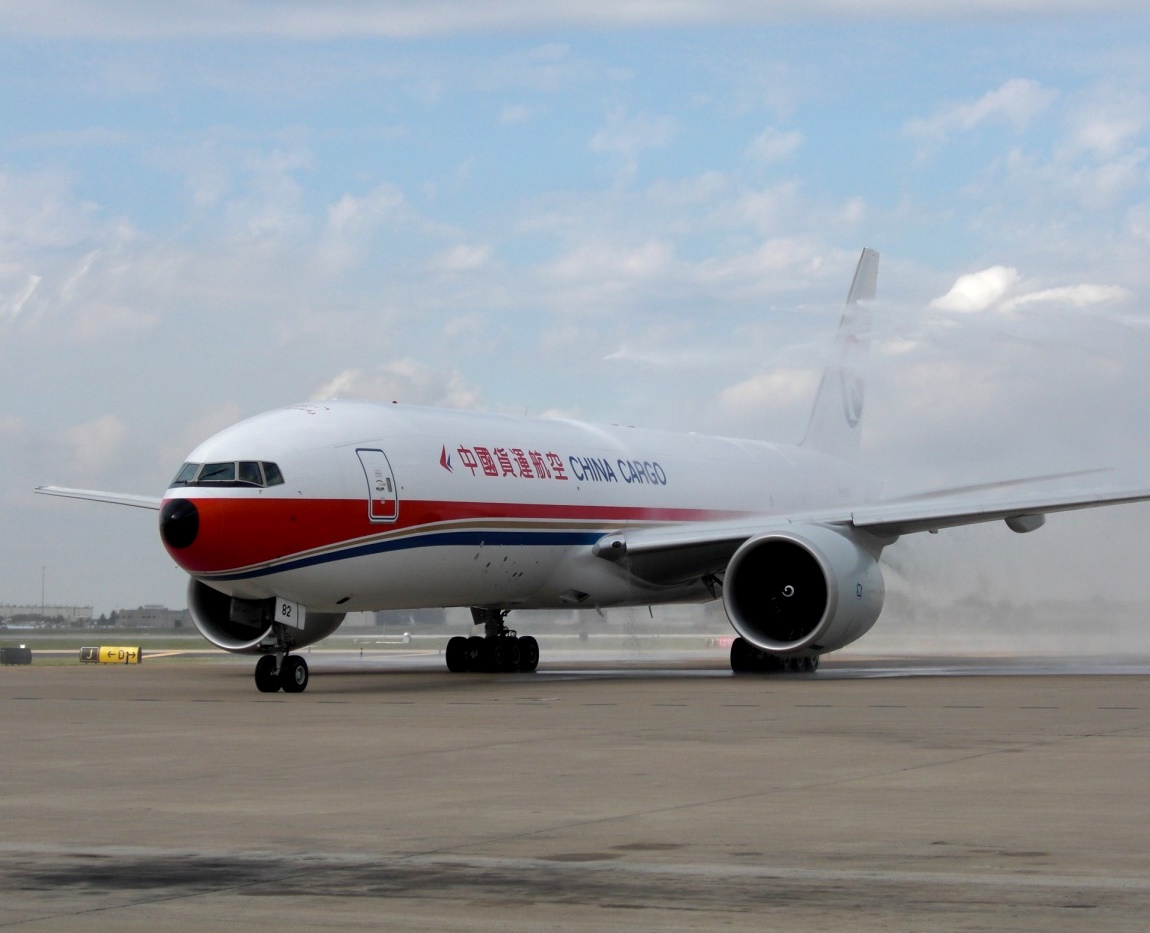 After four years of negotiation between politicians and business leaders from St. Louis, Shanghai, and between the US and China in general, a Shanghai-Pudong (PVG) based Boeing 777F landed at Lambert yesterday at 3:50 PM. After a fifteen and a half hour flight, bridging 7197 miles a tired crew was welcomed with flowers and the traditional inaugural welcome spray from Lambert's Aircraft Rescue & Fire Unit.

The local delegation present consisted of politicians, headed by Mayor Slay and County Executive Dooley; business leaders were represented by the RCGA’s Fleming and the World Trade Center’s Nowak, among many others. The Chinese had sent Consul General Yang Guoqiang and Counselor of the Chinese Embassy He Xiandong. Assistant Secretary Kurland represented the U.S. department of transportation. 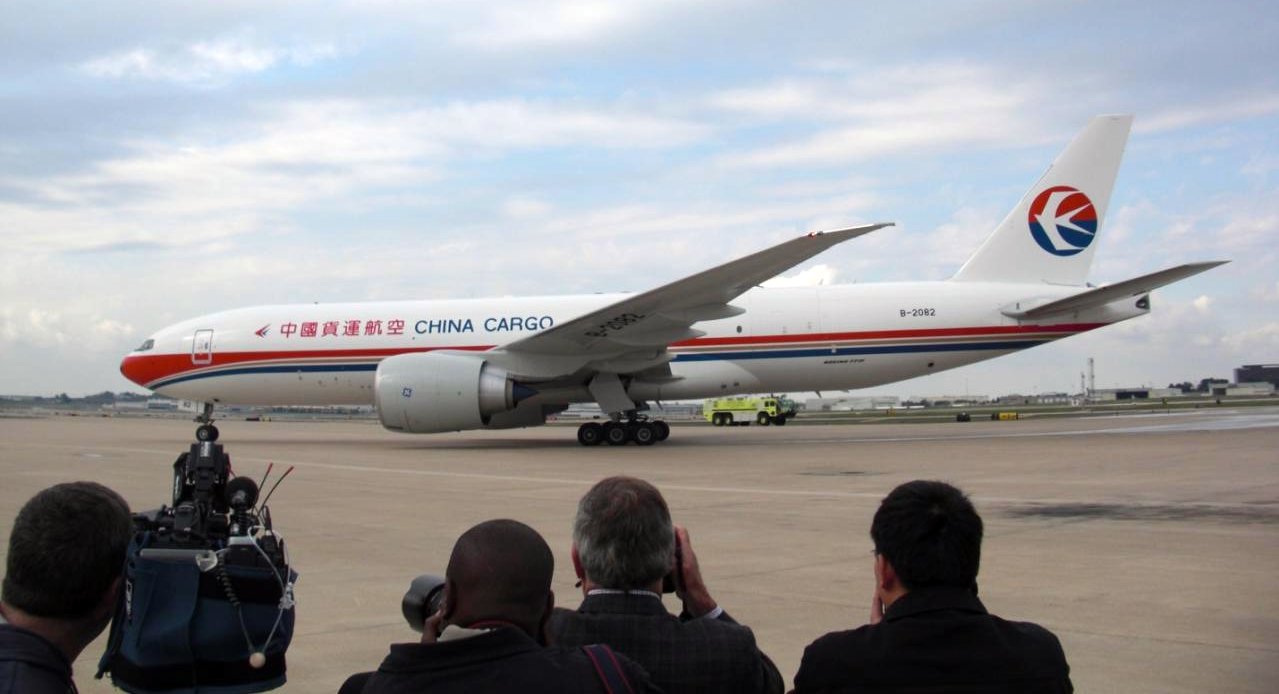 {China Cargo B777F, laden with 120,000 Pounds of electronics from Shanghai taxiing to the ramp}

Consul general Guoqiang made it clear in his speech: the Chinese want to be here. An excerpt of what he said: Trade between the US and China is growing fast. China is getting wealthier. There is no room for the Chinese to set up their own hub at any of the large existing hub airports like Chicago, Los Angeles or Dallas. The Chinese want to build their hub and network in the US and Lambert is well-positioned to make that happen.

He was also very clear when he stated that if Ohio, Illinois or Colorado presented them with a tax incentives package and Missouri fails to do so they will move on. He said: It’s business and it’s everybody’s world.

Interesting to note is that none of the competing airports are big hubs. In Illinois, Rockford is mentioned, Wilmington in Ohio is on the list and Denver, Colorado is angling for this deal. Denver is a large passenger hub but it’s not a major cargo center. Their weakness is their remote location. Wilmington and Rockford should be considered serious competition. 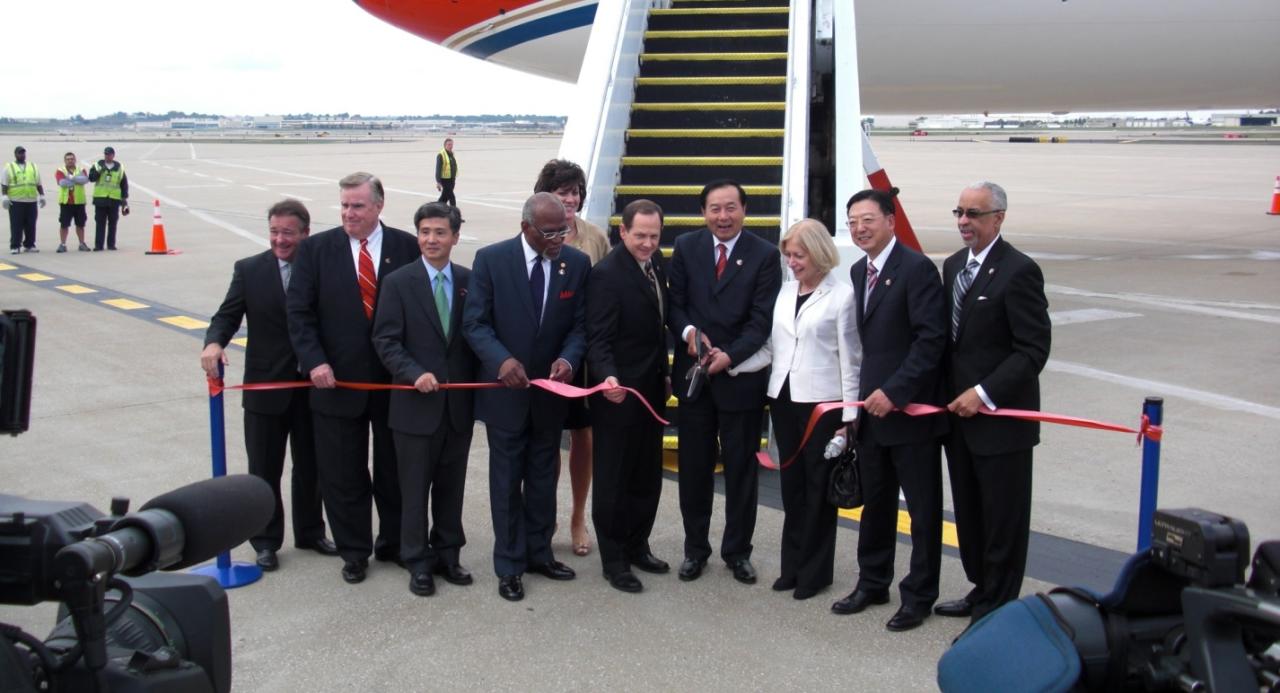 {Ribbon-cutting by Slay and He Xiandong. General Consul Yang Guoqiang is second from right}

As I’ve written in previous articles, cargo consultants who’ve said that St. Louis has no chance of making this hub happen because it has no network had it completely wrong. The Chinese are looking for just that: an airport without a network to be able to build their own.  They could never do this in Chicago or Dallas. Either these consultants simply didn’t understand this concept or they might have had ulterior motives. We’ll probably never know.

What we do know is that the Chinese just landed a 250 million dollar, American-built Boeing 777F at Lambert. This is the start of a once- a-week schedule, soon to be increased to thrice weekly. Crews will be staying at local hotels, spending money in local restaurants. Cargo will be off-loaded by ground handlers and distributed by local trucking companies and freight forwarders. Freight from regional manufacturers will be brought to the airport to be flown back to China. Jobs are being created as we speak.

Every time this airplane departs Lambert for Shanghai it will take in about 43,000 US Gallons of jet fuel at a cost of $5.00 per gallon. The Chinese will be buying roughly $215,000 worth fuel from Lambert every week. And this is just for one single flight. If the hub effort is successful Lambert could see tens of flights each week.

{A warm welcome and flowers for a tired crew after their 7197 mile, 15 hour flight}

Chicago’s O’Hare airport is currently working on a $15 billion dollar (with a B) expansion plan. Not all is well though. Illinois is broke and major users United and American are balking at the cost, which they (in part) will have to bear. In the meantime, the Missouri General Assembly has been stalling tax incentives that will give the state a dollar for dollar return on investment. The credits amount to $ 24 million per year, or $ 360 million over 15 years, less than 2.5% of the cost of O’Hare’s plan. If we let this opportunity, to do direct business with one of the world's largest economies, slip away to other states we will yet again be left behind where others progress. And that’s exactly why Chicago is Chicago and St. Louis is St. Louis.