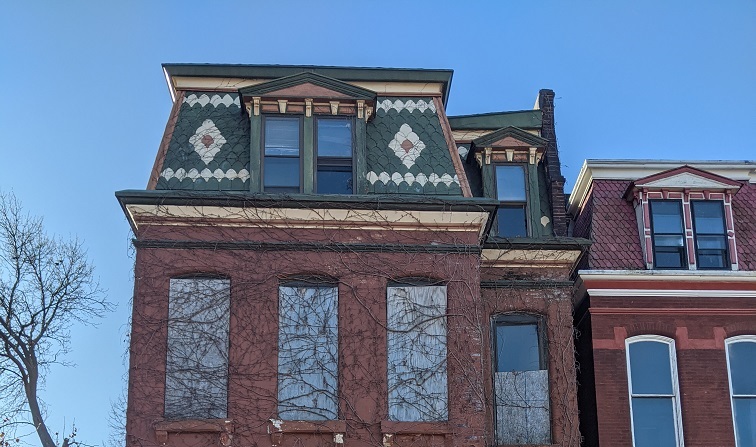 Update – The description for the demo permit according to the city’s property lookup webpage now says “chimney only.” Though the chimney is on the ground already. Unless it’s for another chimney.

A demolition permit application was been submitted August 22, 2022 for 1000 Morrison built in 1886 in the LaSalle Park neighborhood. It appears to be a demolition by neglect situation for the three story apartments-above-corner-retail building by owners Marie Veal Fultz and Jessica Fultz Moore. Veal took ownership of the building from a relative in 2005. According to a neighbor it hasn’t been occupied since the 2000s. The neighbor also says the rehabber who fixed up 1004 Morrison next door, which is for sale, and someone living across 10th inquired about purchasing it, but were ignored.

An $8,500 building permit application was submitted in August of 2020 for “repair bricks (side) per plans.” It was never issued. Scaffolding was erected and dismantled without repairs done. You can see the brick collapse between and above the second floor windows near the rear as well as deterioration well underway below the left chimney.

Water was at work chipping away at the bricks. This might have been a case to try to use the demolition by neglect ordinance to either make repairs and bill the owner, or spur the owner to make repairs or make a sale to someone who would make them. So far the city has never attempted to use the ordinance since it took effect in 2014. The Post Dispatch wrote about the process earlier this year.

A chimney collapsed a few days ago after exterior bricks had given way below it a few months ago, which was the nail in the coffin for the owner leading to the submission of the demolition permit.

The National Register of Historic Places nomination form describes 1000 Morrison as “Good restoration, maintaining corner storefront and ploychrome patterned slate mansard. Fine original cast iron storefront.” Since it is in a historic district, it should go to the Cultural Resources Office for review and perhaps before the Preservation Board. That is unless the owner secures an emergency demolition permit.

Another concern for demolition is a lead and/or asbestos cloud dispersing nearby if proper and statutorily required techniques aren’t followed. Given the neglect, a shoddy demo would fit the pattern of behavior.

The Grim Reaper is coming for this one. Let’s hope it doesn’t meet the wrecking ball.