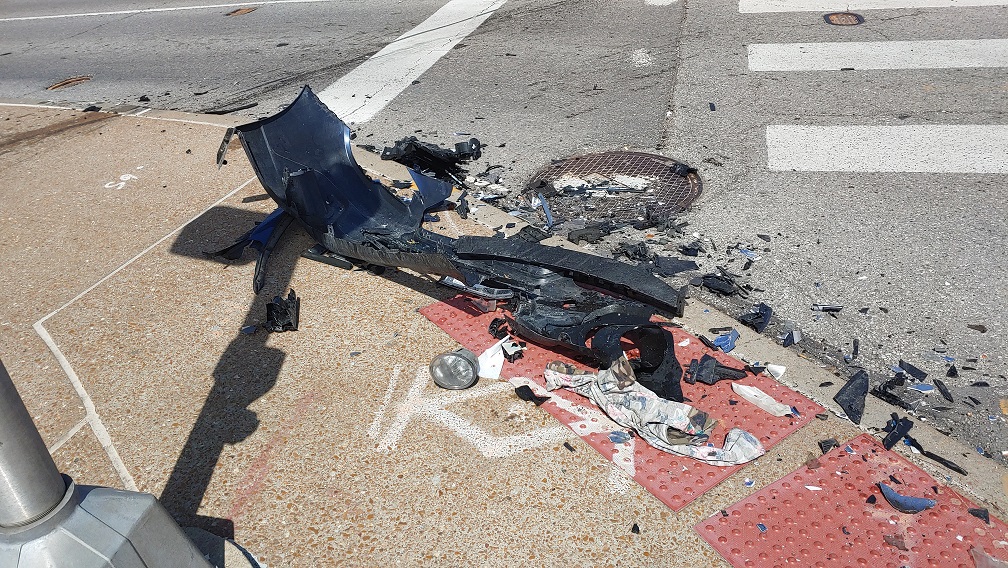 It’s time for bollards at Skinker and Forest Park Parkway. Jaydrivers simply cannot keep their vehicles between the curbs. I’ve seen car debris on all four corners of the intersection. The street lights and utility bits have done their best to blunt them, but something stronger is needed. Certainly there are numerous similar intersections in the region that could use them and other safety measures too; it’s just that I have photos of the carnage here.

The sort of traffic calming infrastructure we’ve discussed before like street diets, narrower lanes, speed humps, raised crosswalks, pedestrian refuges, raised intersections, curb bump outs are probably non-starters here. The surrounding area lacks connections so traffic is funneled onto them, so significant volumes of both local and longer trips pass through each. Bigger picture things that might help like rolling back driving and car ownership subsidies, lighter, better designed cars, speed governors, automated vehicles, built environments that don’t coerce as much and as fast driving, eliminating parking minimums, etc are mostly out of the reach for the local government/community to address, a ways off, and/or would take a while to bend the curve.

Skinker and FPP are designed for volume and speed. FPP is marked 40 mph, and Skinker is 35 mph. I wouldn’t say either is emblematic of a stroad. Skinker doesn’t have as many entrances to adjacent land uses that a stroad would have and those adjacent land uses are not the typical low-productivity auto-oriented ones. It’s not a perfect street by any stretch though with its 60 foot width, center turn lane, and high traffic volumes making it unpleasant and dangerous for anyone outside of a car. FPP is trying to be a road- connecting productive places with few access points, but of course there are conflict points like this intersection.

The intersection has a lot of pedestrian and bicycle traffic too due to the proximity of residences, Washington University, Forest Park, the Delmar Loop, the Metrolink station below (one can cross under the intersection northeast-southwest thanks to the station, albiet circuitous), bus stops on Skinker, and the same funneling effect due to lack of connections nearby. There’s no street parking at the intersection to put some space and obstructions between travel lanes and the curbs. It’s only a matter of time before someone standing at a corner is killed. Let’s do something before that happens this time. Bollards are way cheaper than someone’s life cut short. I hope Washington University would bring resources to the table given that many people crossing here are a part of the WashU community.

With no options in the micro here to slow and reduce traffic, protecting people on the corners from the dangerous conditions demonstrated time and time again by car crashes, it’s time to install bollards.

The World Bollard Association chronicles bollards in action saving lives and property around the world.

Stifel Nicolaus at Washington and Broadway. The St. Louis Federal Reserve Bank has them all around their building.

There are some along Compton north of Park by the Urban League’s Head Start Center.