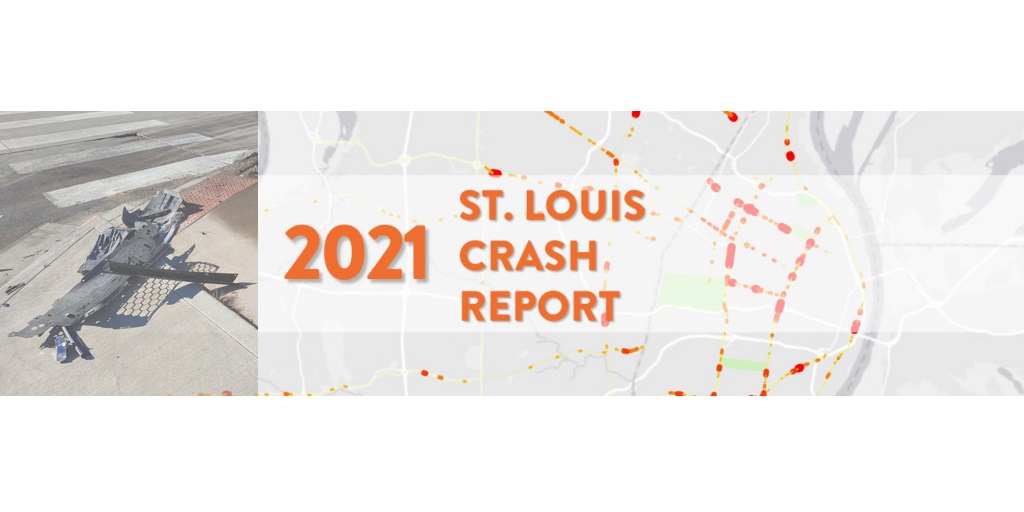 178 people have died as a result of traffic violence in 2021. For the 4th year in a row pedestrian fatalities have risen in the City of St. Louis and for the first time, total traffic fatalities eclipsed 100 in St. Louis County. Trailnet, a local walking and biking advocacy non-profit, believes that all traffic crashes are unacceptable and completely preventable. Trailnet’s 2021 St. Louis City and County Crash Report investigates the trends, characteristics, and provides solutions on how to improve safety for people walking, biking, and using transit

From Trailnet’s Crash Reports, we know where bike, pedestrian, and fatal car crashes happen. Many of these crashes occurred on roads that Trailnet calls the High Crash Corridors. These High Crash Corridors are often characteristically similar. Dangerously wide streets with a posted speed limit of 35 MH or higher prioritize moving cars over the safety of people who walk, bike, and use transit. Over the last 5 years in the City of St. Louis, 9 roads, which account for 1.5% of the City’s total lane miles are responsible for 40% of pedestrian crashes and 46% of pedestrian fatalities. In St. Louis County, 8 roads account for 34% of pedestrian crashes and 45% of pedestrian fatalities.

Despite some successes, much of the year was marked by a continuation of the status quo. The region lacks a unified, focused, or appropriately-funded approach to making streets safer. Across the region, all levels of government should re-evaluate how they approach the life-shattering problem of crashes and not accept them as routine accidents.

An alternative to the status quo is an approach that is both comprehensive in its scope and based on need. At Trailnet we see this approach as driven by data – as we have collected here – but also informed by the needs expressed below:

These strategies are not the only actions that need to be taken in order to reduce traffic violence on St. Louis roads. In the 2020 Trailnet Crash Report, we also highlighted several other solutions that should be addressed alongside the solutions mentioned in the 2021 report. Those solutions include a greater number of pedestrian enhancements along major roads, neighborhood traffic calming projects, distracted driving legislation for the State of Missouri, mandatory roadway education, and an increased number of protected bike lanes.

Our goal should be ZERO traffic fatalities on our roadways, any number higher than that is a sign of collective failure and disregard for the safety of the people living in the St. Louis region.

Sam is a passionate transportation advocate that works for the active transportation non-profit Trailnet. There he works within neighborhoods to plan and implement safety improvements for people who walk, bike, and use transit.