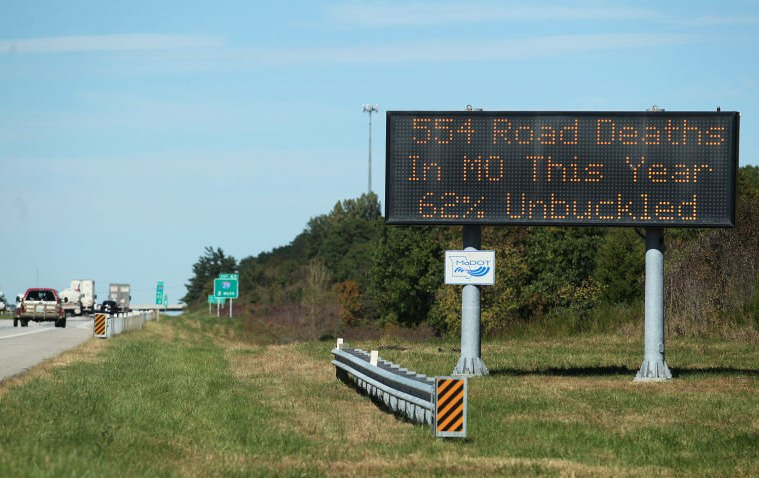 Every two years the League of American Bicyclists releases the Bicycle Friendly State Ranking and corresponding report cards for each state. The League determines its rankings from 1) statewide transportation departments (such as the Missouri Department of Transportation/ MODOT) and statewide advocates, and 2) federal data indicators on bike safety, use, and funding used for walking and biking. From this information, grades are given for 5 categories: Infrastructure & Funding, Education & Encouragement, Traffic Laws & Practices, Policies & Programs, and Evaluation & Planning.

Missouri’s 2022 ranking from the League landed at 45th out of 50, the lowest ranking for Missouri since the League began ranking states. The drop into the bottom 5 has been coming for years now, in fact, Missouri’s ranking has been steadily dropping since the state’s highest ranking of 17th back in 2009. While other states have taken steps to improve statewide policy and planning efforts for people who walk and bike, the Show-Me-State is losing ground.

Passing distracted driving legislation is by far the easiest and most impactful step Missouri could take to improve its ranking and generally make our roads safer to travel on for all users. Along with Montana, Missouri is one of two states in the US or US territories, that doesn’t have any limits on distracted driving for adults or any form of distracted driving legislation for adults. According to the Missouri Coalition for Roadway Safety, from 2016 to 2020, 407 people have died in traffic crashes involving a distracted driver. Over the same amount of time, cell-phone-related crashes have increased by 30%, with nearly 2,500 crashes (involving a distracted party) in 2019 alone. While these numbers are staggering, Missouri State Highway Patrol officers believe the real numbers are actually much higher than what is reported, because most drivers typically do not admit to using their cell phones in crashes. But there is light at the end of the tunnel.

Last year, distracted driving legislation was introduced in the Missouri Senate and House of Representatives, the legislation would restrict people from using devices like cell phones and other electronic devices while driving. However, many of the bills have exceptions for using electronic devices if 1) they can be used without being held 2) they can be used with the push of a single button, and 3) they don’t take the driver’s attention away from the road. In March 2022, a Senate bill passed through the Missouri Senate’s Transportation, Infrastructure, and Public Safety Committee and moved on to the full Missouri Senate for debate and vote. Unfortunately, the legislative session ended before the bill was voted on. Most likely the bill will be reintroduced and voted on in the next legislative session and will then be passed along to the Missouri House of Representatives.

Passing distracted driving legislation into law would be a big (and somewhat overdue) step for the State of Missouri. Specifically in St. Louis where traffic violence is on the rise, simple solutions like passing common-sense legislation will have positive impacts on the lives of residents in the region. If you’d like to get involved in the fight for pushing forward this legislation, visit this link for more information.

The disproportionate allocation of funds for bike/ped/transit projects is one of the main reasons the United States, and the majority of cities and states, like Missouri, often lack proper infrastructure and programs that prioritize people who walk, bike, and take transit. A classic example of the disproportionate allocation of federal transportation dollars is the Katy Freeway expansion. The State of Texas was awarded $1.42 billion by the federal government to widen a 12-mile stretch of interstate in Houston to a total of more than 15 total travel lanes. In comparison, the total amount of funding allocated for bicycle and pedestrian projects in the entire United States for 2020 was $1.027 billion.

The lack of proper bicycle and pedestrian funding is inherently a federal issue, but states also have discretion on how they choose to spend federal funding. The Bike League has recommendations for how much each state should allocate and recommends that states allocate 2% or more of federal transportation funds to bicycle and pedestrian projects. In the past, Missouri met the 2% mark, but for the most recent League Report Card, Missouri did not meet this threshold. The Missouri Department of Transportation (MODOT) has a web page dedicated to informing the public on how money is spent on projects across the state. From the numerous documents and graphics, one thing that is evident: roadway safety and multi-modal projects receive the lowest amount of funding. In 2021, MODOT invested $1.718 billion on state roads and bridges, the lowest expenditure for that funding was for “highway safety” with $18 million in funds allocated (a little over 1%). While vehicle and pedestrian fatalities have been rising across Missouri, the amount of funding dedicated to “highway safety” has remained around $16-$19 million since 2016.

Multimodal projects, specifically transit and commuter rail projects, also lack funding compared to other maintenance and roadway projects. Of the $3 billion in total revenue taken in last year by MODOT, $92 million went towards funding “multimodal” projects, the lowest of the five expenditures noted by MODOT. Within that multimodal category, transit and commuter rail was budgeted $38 million, the lowest amount of funding transit and rail projects have received, per public MODOT records which go back to 2016.

By looking at these numbers, it’s clear that not enough money is being allocated to improve the safety of roadway users, particularly those who walk, bike, and take public transportation. Roadway fatalities have increased three years in a row and pedestrian fatalities across the state are on an upward trend. Increased funding for bicycle, pedestrian, and roadway safety projects would help reverse this trend. An impactful step for the State to take would be to not only return to the recommended 2% allocation of federal funds, but become a national leader in funding bicycle, pedestrian, and other roadway safety projects. Setting aside 5%-10% of the federal funding for bicycle and pedestrian safety projects, specifically for improving Missouri’s most dangerous roads, would drastically improve safety for all roadway users and set an example for other states to follow. Increasing the amount of funds Missouri dedicates to “highway safety” and “multimodal” categories are also needed. A slight increase in the “highway safety” project budget from 1% to 5% ($18 million to $56 million) would allow the State to implement additional roadway safety projects like the Natural Bridge ($5.4 million) project, which have the potential to save lives along Missouri’s most dangerous roads.

Distracted driving legislation is not the only metric where the State of Missouri is lacking behind the pack. According to the League of American Bicyclists, Missouri is one of eight states that has NEVER adopted a statewide Bike or Active Transportation plan. The definition of a statewide Bike plan is simple: “a blueprint for safe bicycling networks in the state that lays out the funding needs of building those networks”. These plans are essential for identifying key bike connections, identifying potential funding mechanisms, and developing supporting programs and policies like children’s bicycle education, Complete Street Policies, and Safe Passing Laws that build a culture of biking and walking in states.

Bike plans from states like Massachusetts, Maryland, and Minnesota are extremely thorough in how they are planning for the future of biking in their respective states. In Massachusetts (the top-ranked state for 2021) and Minnesota, the State DOTs are prioritizing complete biking facilities (separated bike lanes and side paths) that are safe for people of all ages and abilities. In Maryland, state leaders are looking at how walking and biking can be leveraged to revitalize communities and spark tourism opportunities across the state.

What these states are doing is not particularly new in the world of walking and biking. Building out protected biking infrastructure, developing education and encouragement programs, and other basic principles are things that most cities and states have been doing for years. Missouri needs to start taking the concerns of people who walk and bike seriously, and a good place to start is developing a Statewide Bike Plan.

The State of Missouri is at a crossroads. In less than 5 years, we could be the only state in the country without distracted driving legislation, the only state without a bike plan addressing the needs of people who bike, and sooner or later, we could be considered the least friendly state to ride a bike in. But it doesn’t have to be this way. There is distracted driving legislation drafted, we just need brave elected officials to pass it. We have the funding for transportation projects, now we need our local and statewide leaders to allocate more of those funds to improve the safety of people who walk, bike, and take transit. The tools are there for Missouri to become a better place to walk and bike, now we need action.

Sam is a passionate transportation advocate that works for the active transportation non-profit Trailnet. There he works within neighborhoods to plan and implement safety improvements for people who walk, bike, and use transit.