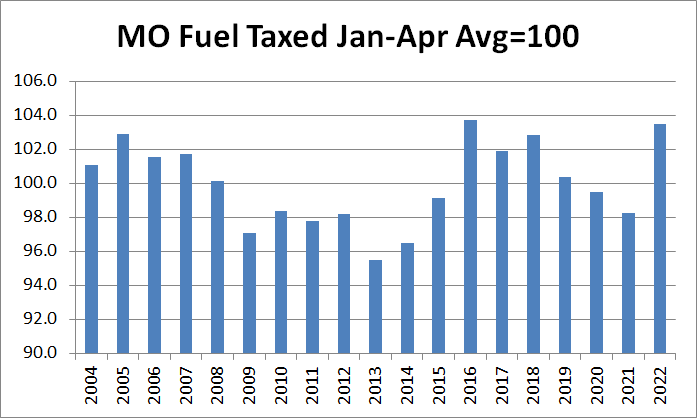 Last month we saw how fuel sales in Missouri have remained robust despite rising prices nearing record highs. It appeared that fuel demand was very inelastic, that Missourians are captive—in the face of price increases, Missourians for the most part have no practical substitutes. For a state which produces almost no oil and has no oil refineries, the captivity is a detriment to Missouri’s economy, its communities, and households since most of the wealth spent on gasoline leaves the neighborhoods, towns, and state as a whole. One thing is for sure, complaining about gas prices is highly elastic. We’ve seen a steady stream of “pain at the pump” stories for months featuring drivers fed up with the “high” prices.

The Missouri Department of Revenue recently released statistics for April. Gas prices remained high that month, about 50% higher than a year ago and pulling back a little bit from March highs.

Fuel sales were 3.5% higher than the average over the last 19 years.

So what’s going on? Is fuel as inelastic as one would imagine insulin is? No matter the price we’ve got to pay up because there is little to no freedom to choose something else? In a paper published in 2006 linked below, the authors found the short-term elasticity of fuel demand to range from -0.01 and -0.04, meaning for a 1% increase in price demand would fall 0.01% to 0.04%. That feels sensible. In the short term, not many people are going to make changes to avoid high fuel costs like buying a different vehicle, moving closer to their jobs, moving to places where other modes of transportation are practical, making other transportation modes more practical where they live through infrastructure and land-use changes, etc.

Evidence of a Shift in the Short-run Price Elasticity of Gasoline Demand – Hughes, Knittel, Sperling – National Bureau of Economic Research

More recent research using new estimation methods and new data published in 2017 puts the short-term elasticity at -0.37. We’re certainly not seeing that in Missouri. For a 50% increase that elasticity factor would mean an 18.5% decrease in demand. Tough to fathom phenomenon like Illinoisans coming over to buy gas making up for that. See the links below for more on resent research.

What else? More employment and thus people driving to work? No, non-farm payrolls in Missouri are still below pre-pandemic levels and down a little in April from March.

Planetizen – Are Gas Prices Too High?

Work from home employees returning to driving into the office? Pent up demand to travel from the pandemic? The Federal Highway Administration reported that national Vehicle Miles Traveled (VMT) in March was a record high. Maybe these prices really aren’t that high, that they are at a fraction of income that is not compelling enough for many to change behavior, especially when practical substitutes aren’t available to most. Of course the fraction of income depends on your income, and the percentage of income spent on energy is higher for lower-income households. For families with little discretionary spending and driving, higher fuel prices crowd out other necessities.

If you are someone hurting due to high fuel prices driven by those who care little about the “high” price and find you are trapped with no practical options to consume less, be sure to ask your elected officials what they are doing to reduce your captivity.