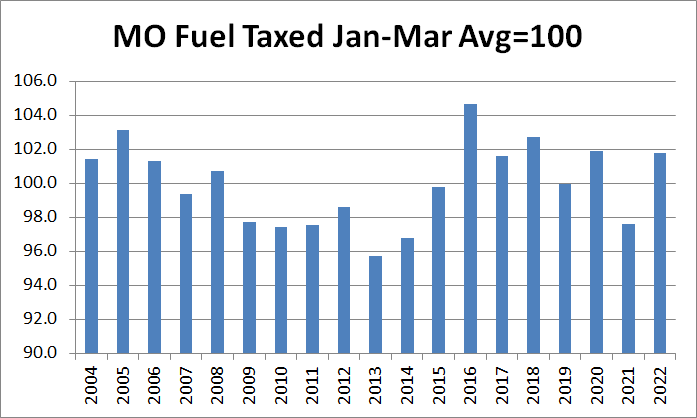 I’ve been curious to see how the rapid rise in gas prices the last few months has affected fuel sales. The Missouri Department of Revenue publishes the Motor Monthly Highway Report as a part of its Public Information Reports. Note, it reports the number of gallons taxed, not exactly the same as gallons sold.

Gas prices have risen nearly 200% from the pandemic bottom in 2020 in Missouri. It’s been eating into households’ budgets and contributing, along with car prices, to high inflation. We’ve all seen the numerous “pain at the pump” stories. In Economics 101 you learn about the supply and demand curves. At higher prices there is less demand. Where they meet is an equilibrium of quantity of the good and price. It turns out to be to be a bit more complicated than that basic model.

With such a dramatic price rise, you’d think there would be a drop in fuel sales, but the first three months of 2022 are the same as the first three months of 2020. One caveat is that the state isn’t in a vacuum. Drivers in other states can buy fuel in Missouri. The price differential with Illinois is the greatest among Missouri’s neighbors. Sorry, I don’t know how big of an effect that is. Also note that the International Fuel Tax Agreement ensures fuel taxes are applied where it is used not where it is purchased for interstate truckers.

Here I normalized to the average amount over the last 19 years to better show the variance year-to-year. You can see a drop from 2008 to 2009 related to high prices in 2008 and the Great Recession, a rise from 2013 to 2016 while prices were falling, and drop from 2020 to 2021 related to the pandemic. Those trends make sense.

Missouri’s economy was 19% larger in 2021 than 2004. The amount of fuel consumed hasn’t tracked with that growth. That’s a good thing- the GDP/gallon of fuel has increased. In other words we’re getting more economic output without using more fuel. In fact they aren’t related at all, a least in the range of fuel consumption and economic output over the period 2004 to 2021.

Also Missouri’s population has grown 7% from 5.756 million in 2004 to 6.168 million in 2021 with fuel consumption pretty much flat over that period. Considering that Missouri produces almost no oil, it would be great for the state’s economy to reduce the amount of fuel necessary per dollar of GDP. It would be a positive feedback loop as more wealth would stay in the state to further grow its economy.

What we see is that fuel demand is inelastic. Despite big swings in fuel prices, there is much less change in fuel purchased. Missourians are captive. Due to a lack of practical choices there is no substitution effect. If the price of one food item goes up you likely can choose something else that fits your budget. In the case of transportation practical, cheaper options are non-existent for almost all Missourians for almost all trips. When car and fuel prices soar, they have to take it. We’ve built places in way that denies Missourians the freedom to choose how to get around. Both local and state governments have been increasing our risk exposure to fuel markets through zoning regulation, transportation spending, and driving subsidies.

González-Hermoso argues that to protect Americans from future price surges, policymakers need to make them less vulnerable to the fluctuations of a volatile commodity. He advocates for designing denser communities, making roadways safer for non-car users, and increasing public transit access. The time is ripe, as driving becomes pricier, for beginning such changes.

The feckless state legislature can only point fingers and offer a gas tax holiday or repealing the barely implemented gas tax increase passed last year. These do nothing to reduce our long term risk exposure. They promote continued vulnerability.

Missouri has no control over fuel prices. We can however change how we build places and broaden our choices in how we get around to lower our risk exposure. Instead of being victims again and again, let’s do something about it.