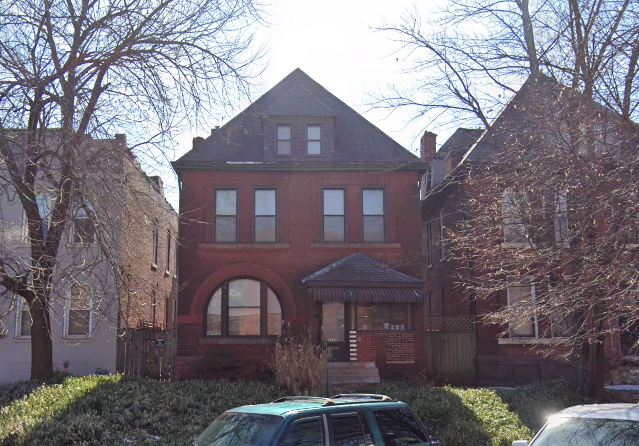 *Note* 4046 is the building to the right in the image above.

A demolition permit application for 4046 Laclede in the Central West End neighborhood was summitted April 5, 2022. It is located within a preservation review district, but it is within the CORTEX West Redevelopment Corporation’s redevelopment area. Since it is a Chapter 353 redevelopment corporation, the demolition will not be reviewed by the Cultural Resources Office nor the Preservation Board. Instead it’s up to CORTEX. A permit for a tap destroy has already been issued- a sign that the end is near.

How threatened are the six buildings on Laclede? 4040-42, 4044, 4046, and 4048 have the same owner, Adam Strauss and Amy Massie. They have owned them since 2002. Strauss is the son of Leon Strauss and step-son of Mary Strauss who famously saved the Fox Theatre from the wrecking ball. The vacant land to the east looks ripe for development. 4038 is owned by someone in Swansea, IL. Two of the four units in 4034-36 have an owner address in Wildwood and the other two have an owner address in Southampton. None have had substantial work done to them in the last ten years, according to building permit records. All this doesn’t bode well.

Fine-grained development is a plus for an area. Replacing these with a higher-productivity land use has positives too. The vacant land to the east has 375 feet of frontage, surely plenty for new build(s). There are already some buildings on large parcels nearby like the West Pine Lofts. A variety of sizes interleaved makes for an interesting place.

Note the buildings with New Market Hardware and Scottish Arms are also in the CORTEX redevelopment area. Let’s hope their positive contribution to the built environment and the neighborhood are recognized by CORTEX.